Alcatraz was probably the one thing I was looking forward to the most and it did not disappoint.  I am a history nut and absolutely love stuff that has controversy or mystery around it.  The fact that Alcatraz was supposed to be 'inescapable' and yet 5 prisoners are listed as "missing and presumed drowned", just gets me all excited.

We had a reservation time to get on the ferry to go over to Alcatraz.  They only let so many people go a day, and you have a specific ferry time to go over, but can take any ferry back.  We got there a little early, and just waited and people watched until it was time to line up for the ferry.  The ride was quick - less than 15 minutes, and Bean did fine on it.  I had to focus up ahead, otherwise, it would have messed with me.  We got to the island and made our way up to the cell house to do the audio tour.  We really enjoyed listening to the audio tour and soaking up all that the old penitentiary had to offer.  While we were taking pictures of the jail, I would have several tourists come and check out Bean!  She became a little attraction, and some tourists even asked to take pictures of her.  Ha! 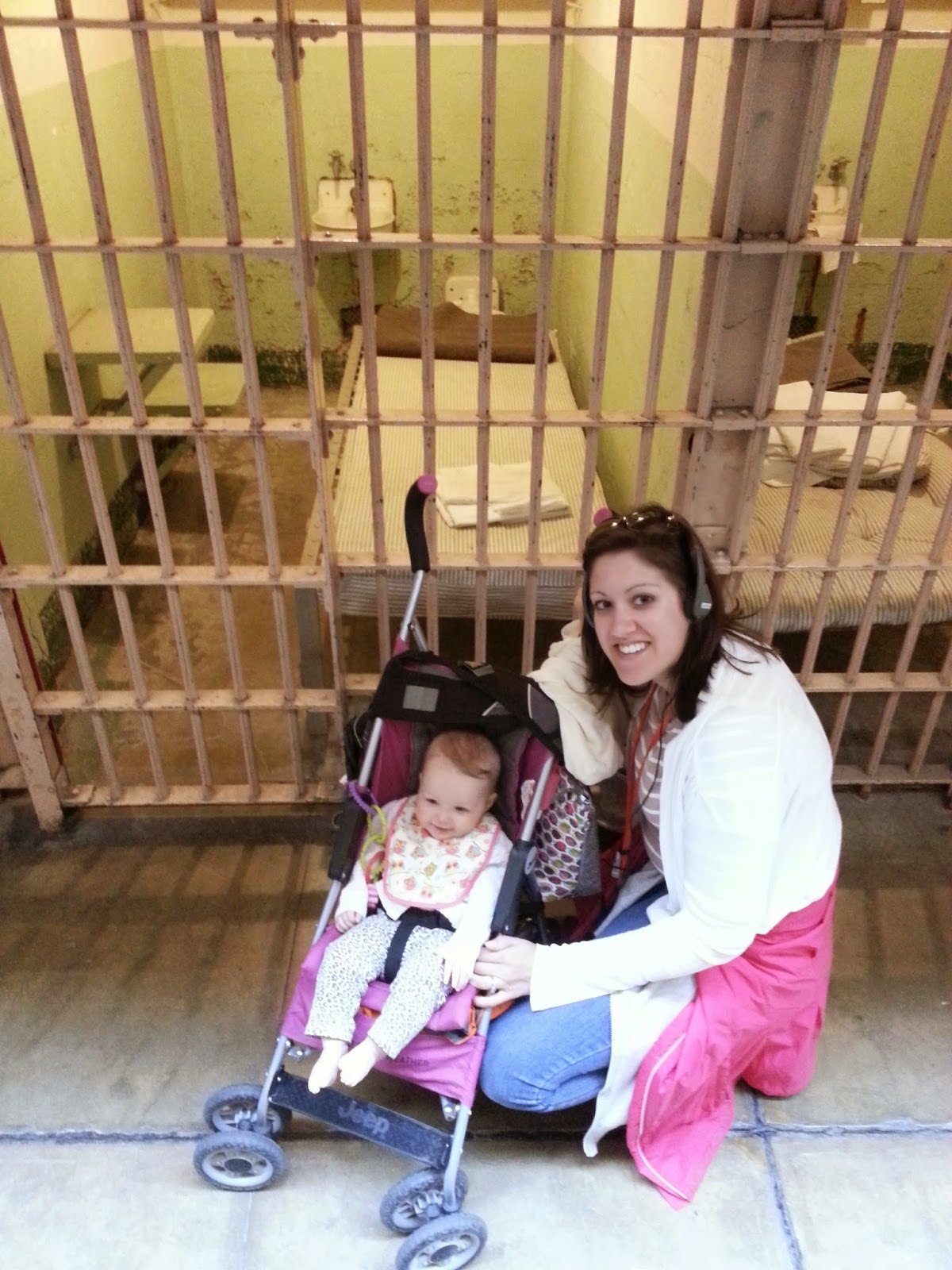 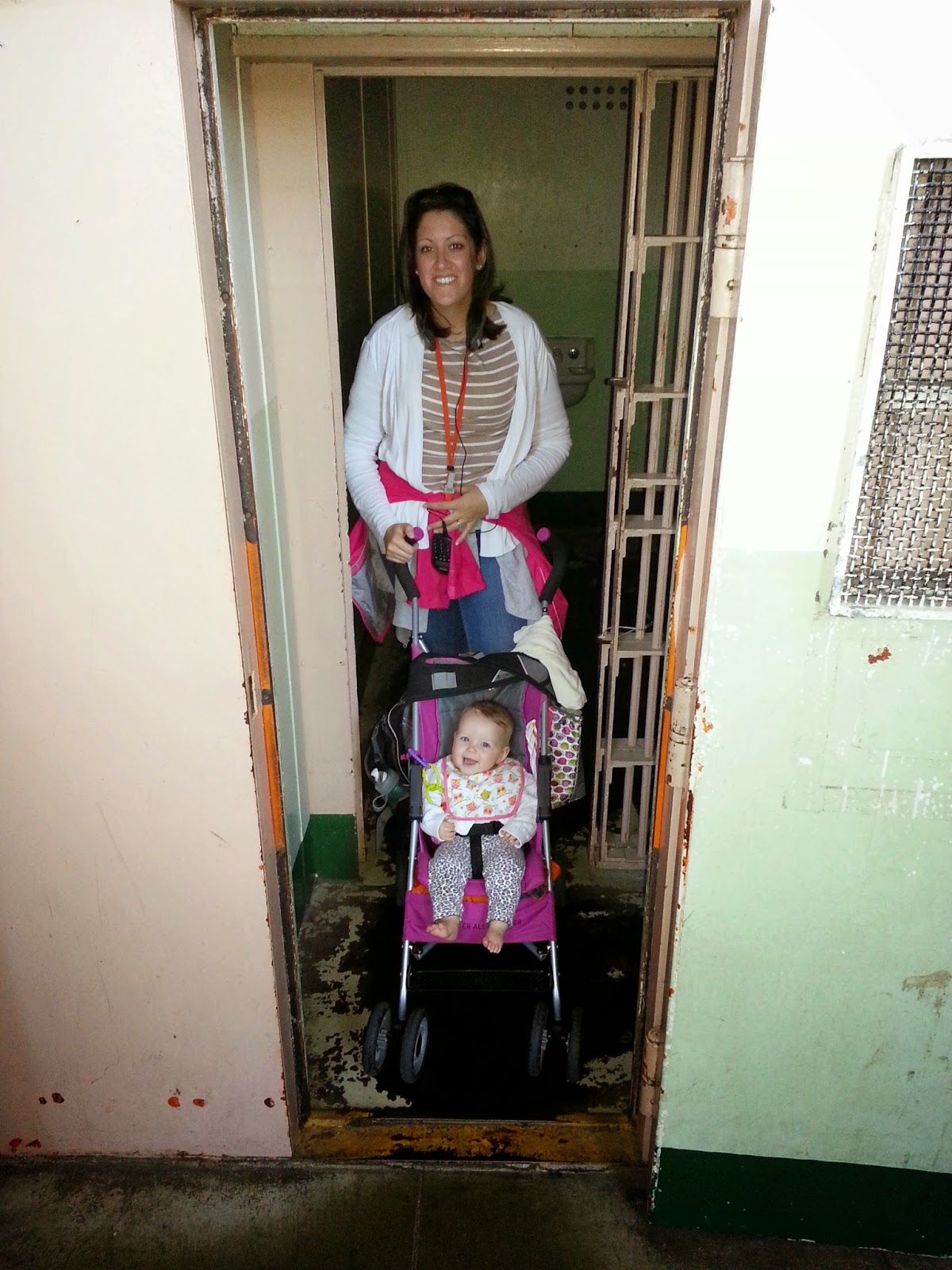 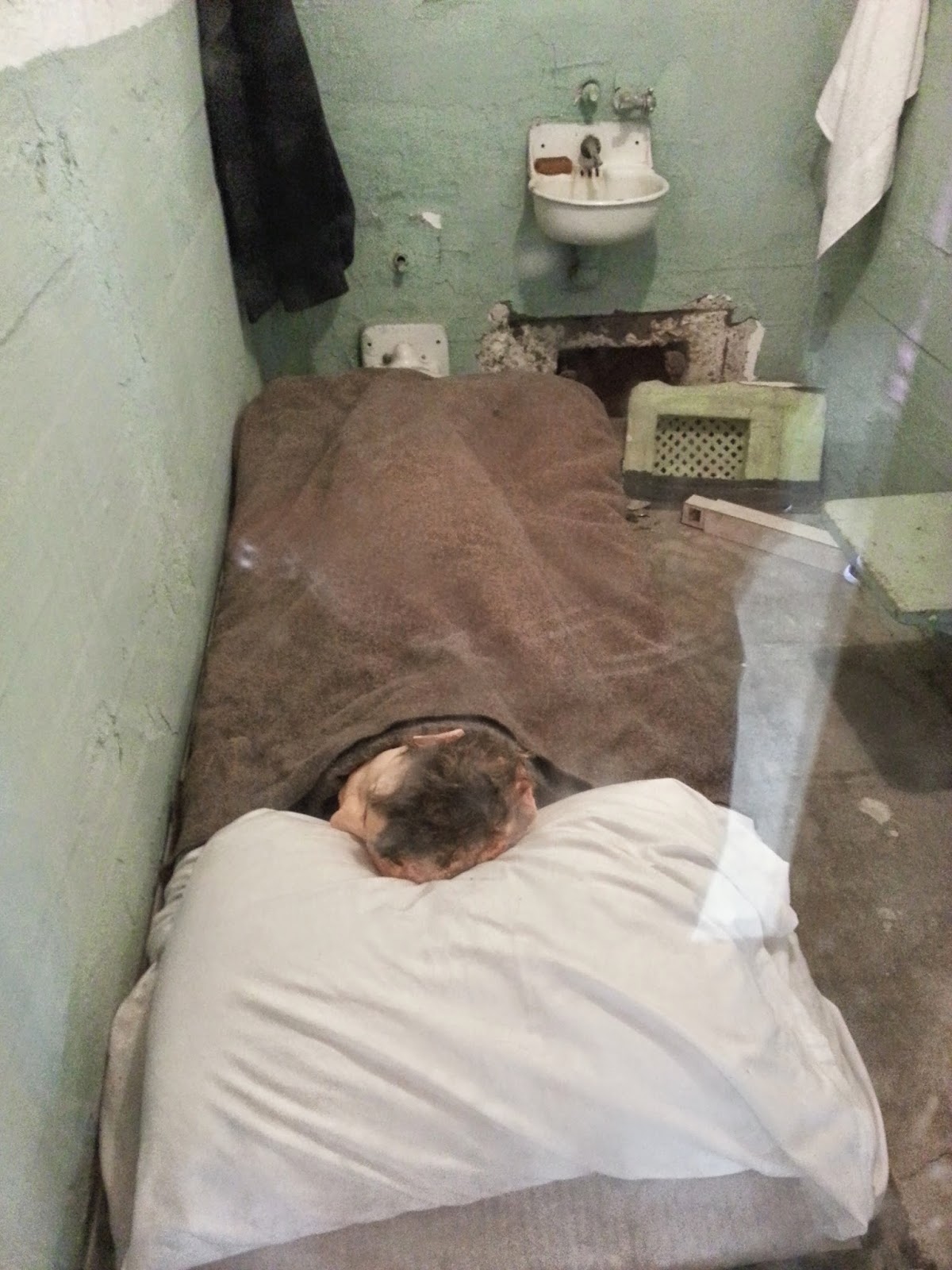 (This cell was left like it was discovered on June 11, 1962.  The officer discovered the dummy head made from soap, toilet paper, and real hair from the barber shop during night-time bed checks.  Frank Morris along with the Anglin brothers had been chiseling away at the air vent for over a year.  They fashioned a raft out of rain jackets and made their escape.  It is unknown whether the raft worked or if they made it to freedom.  Some of their supplies were found on nearby Angel Island, but it is unknown if it just washed up.) 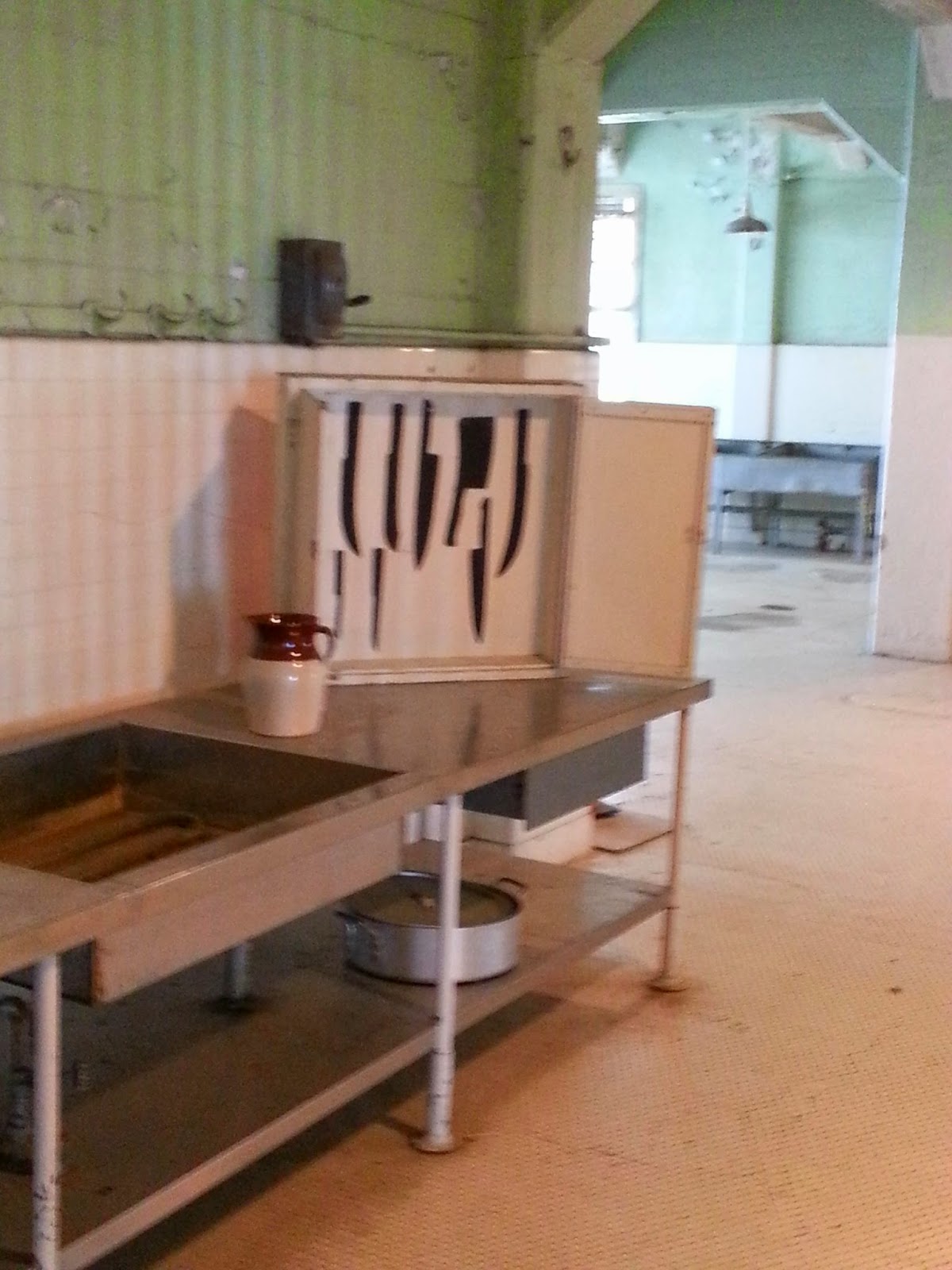 (In the kitchen, there were shadows of the knives in the knife case so that it would be easily seen if a knife was missing.) 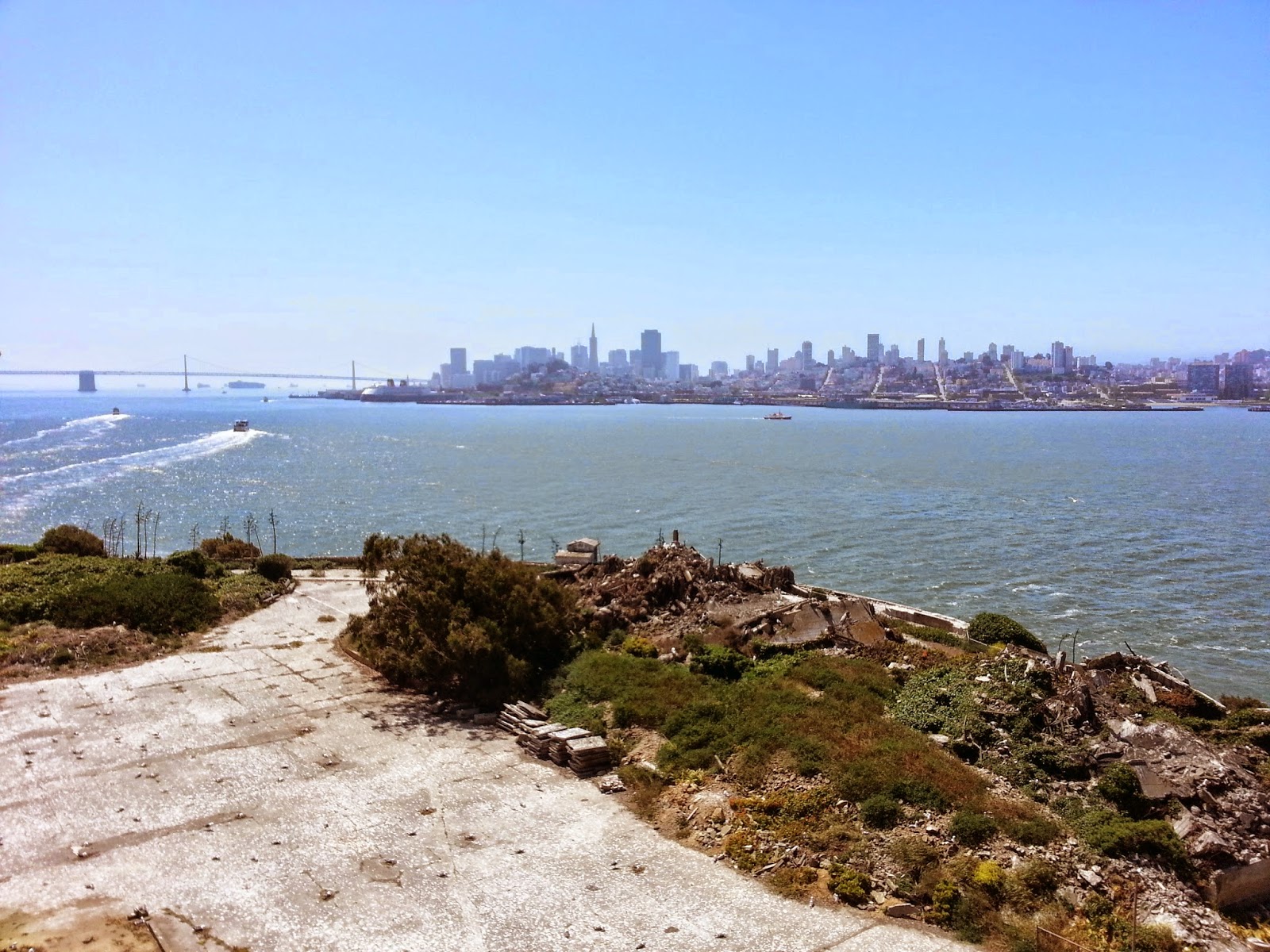 (View across the bay to the mainland)

Bean lasted in the stroller for awhile, but eventually started to get bored and losing it.  I switched her to the carrier, and she ended up sleeping the rest of the time we were looking around.  After finishing up at the cell house, we were going to walk one of the roads that promised great views of the bay, but it was super windy and Bean was having none of it.  We were getting pretty hungry and had brought our lunch with us, but you were only allowed to eat at the dock.  So we decided to head back to the dock, eat, and ferry over back to the mainland.  It ended up that there was a ferry loading, so we hopped on it and just ate our lunch on the mainland.

From there, we walked over to the Ferry Building.  I thought we were going to see some more ferries or visit some sort of museum, but it ended up just being like a station terminal with a lot of shops.  I was really confused and tired and was having none of it.  But then Steve bought me ice cream and quickly forgot my woes.  We had built in time in the afternoon to go see Pier 39, but since we did it the night before, we just headed back to the apartment for the afternoon.  Bean was able to lay down and take a little nap, although she would only take it laying next to Daddy.  Perks for him as he got a nap in too!  Poor momma really needed the nap as Bean had decided that 5am was a good start to the day, but I couldn't get comfortable on the couch, so I just read and watched tv.

Once they woke up, we got our stuff together and headed out to find dinner -- food trucks!  San Francisco is lucky in that it has food trucks that are scheduled by an organization called Off The Grid.  The trucks move around the city and can be found at different locations at different times on different days.  Luckily, there was a location near our house that we got to visit.  We felt like such locals (and even got confused as locals) as we ate the delicious food and hung out.  After eating, we walked up to Coit tower before heading to the apartment for the evening. 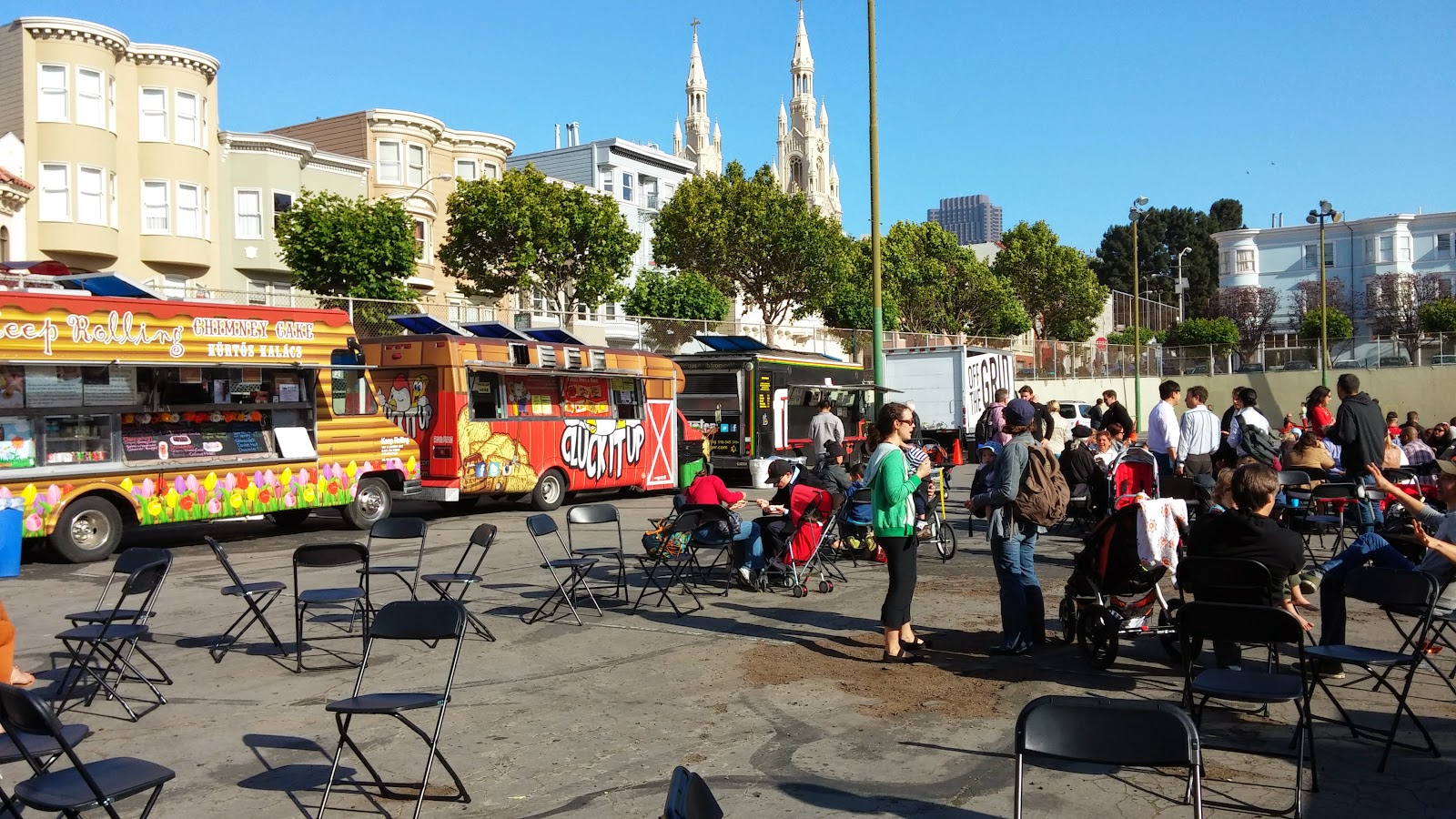 (Off the Grid! There were like 9 food trucks at this event.) 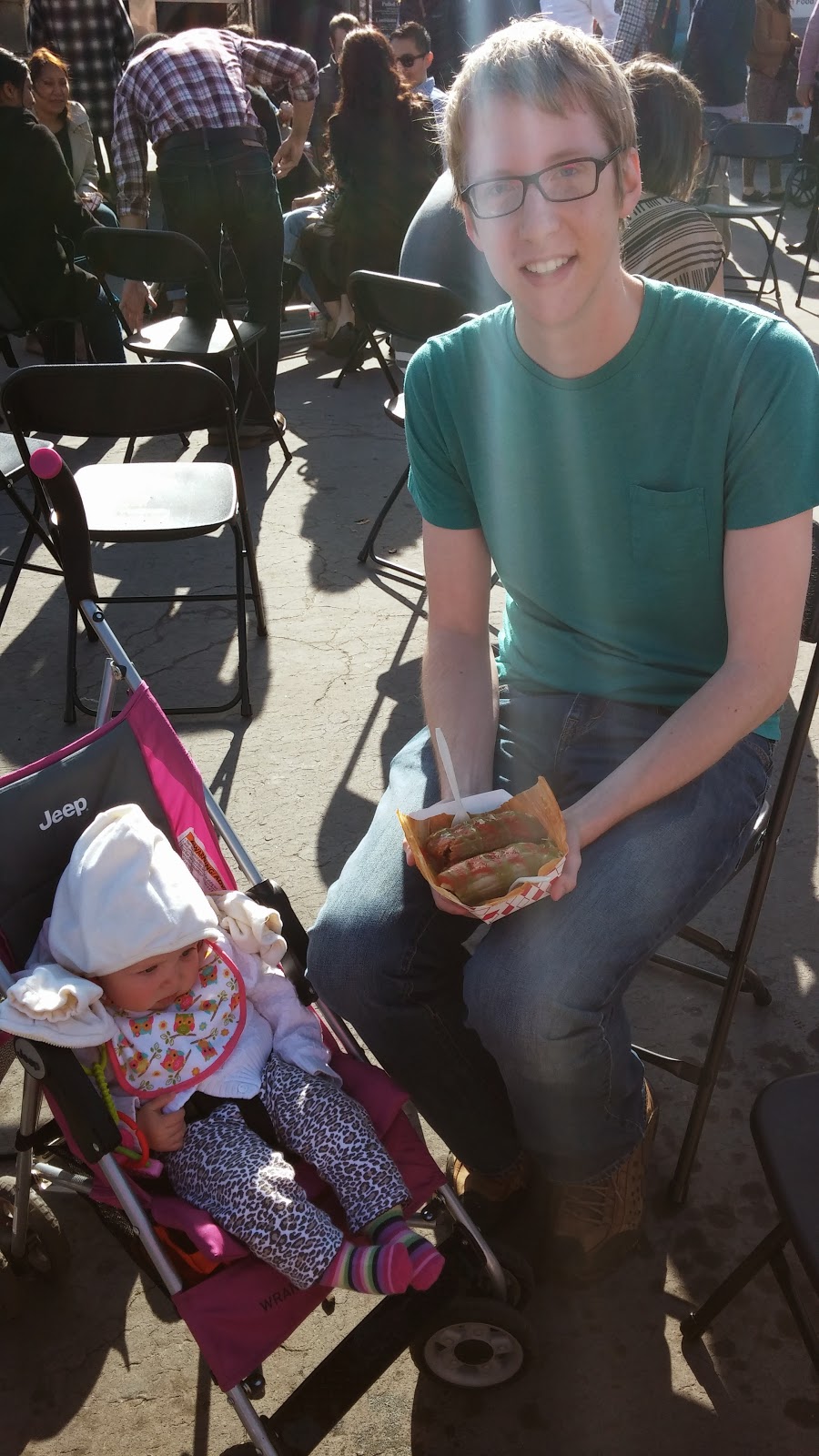 (We started off with some tamales and then got a Korean meat dinner.  Both were absolutely delicious!) 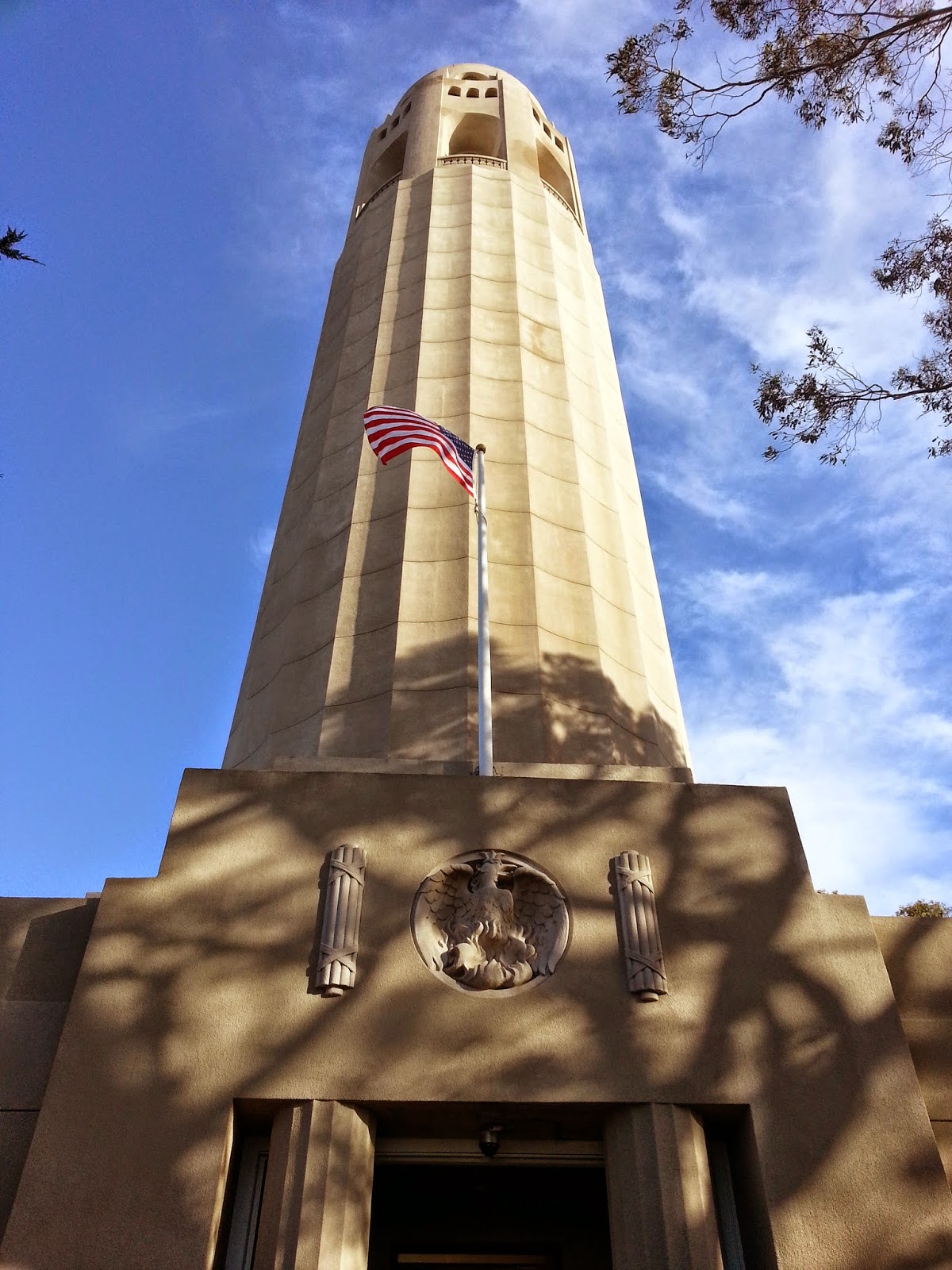 (We could see Coit tower from the front window of our apartment.  It was nice to finally get up close to it and check it out.  We could have paid to go in and all the way to the top, but we decided this view was good enough.  We had hoped to be able to see other sites from around the base of the tower, but there were trees all around that blocked the view.) 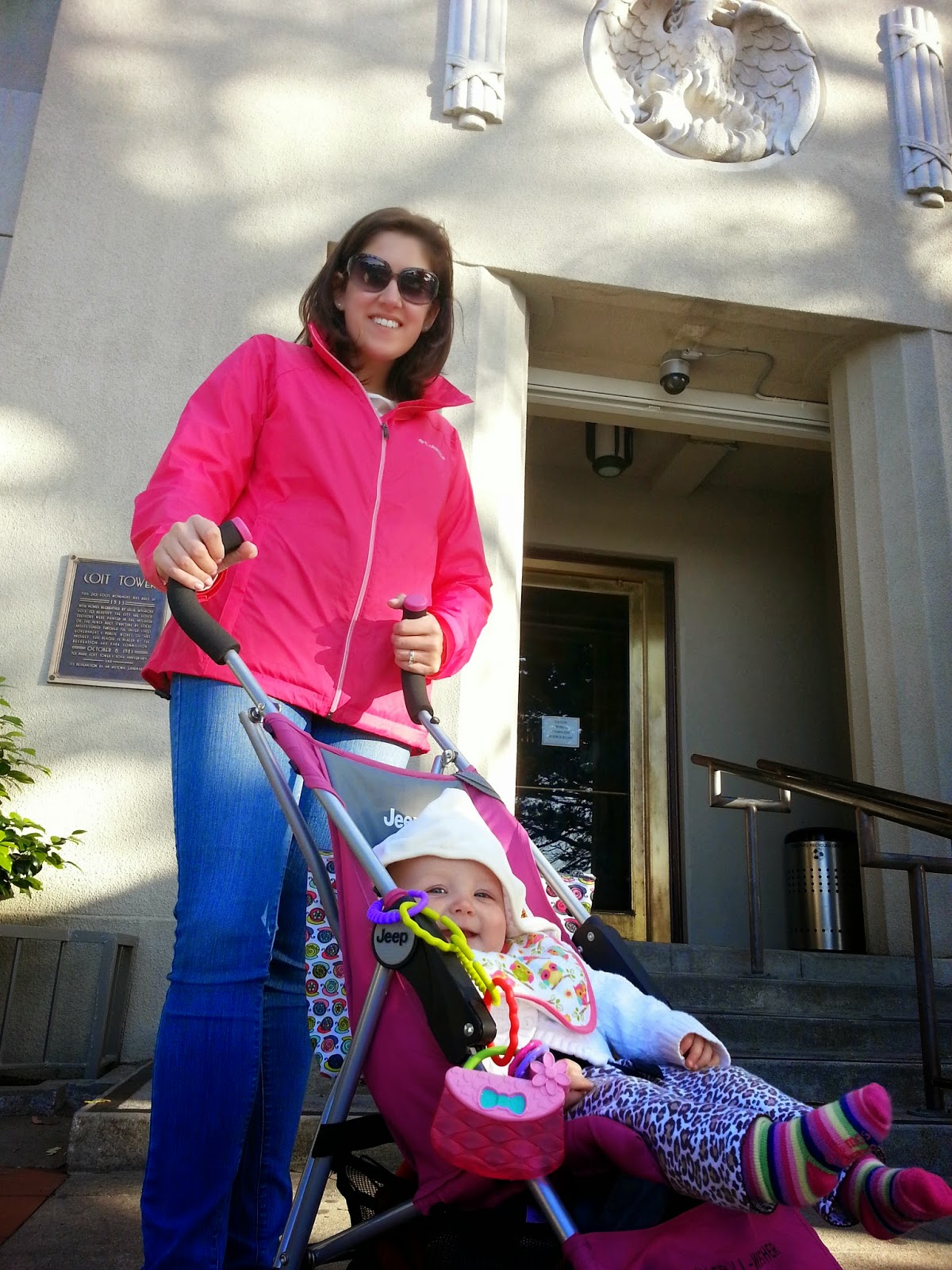 (Checking out the tower, while Bean is thinking, "Hey Mom & Dad, I'm cold and tired.  Let's go to bed!" Even though she fought sleep when we did get back.  Silly girl!)
Posted by Unknown at 7:30 AM