From here on out, the rest of our trip is solely around San Francisco.  On our first official San Fran day, we spent it walking around some of the big areas.  We loaded up our backpack, the stroller and ergo carrier, and left the apartment - not to return until evening!  Yikes!

We walked down a ways and found the beginning of our day - Macondray Lane.  At this point, we realized that I didn't pack our San Fran book in the backpack.  Steve had laid it on the table next to the bag as I was packing it, and missed the memo.  Luckily, we were able to pull up some info on our phones.  The pedestrian lane is just full of lush green plants which is few and far between in San Fran.  It also had a good view of the bay and Alcatraz and has been featured in some movies. 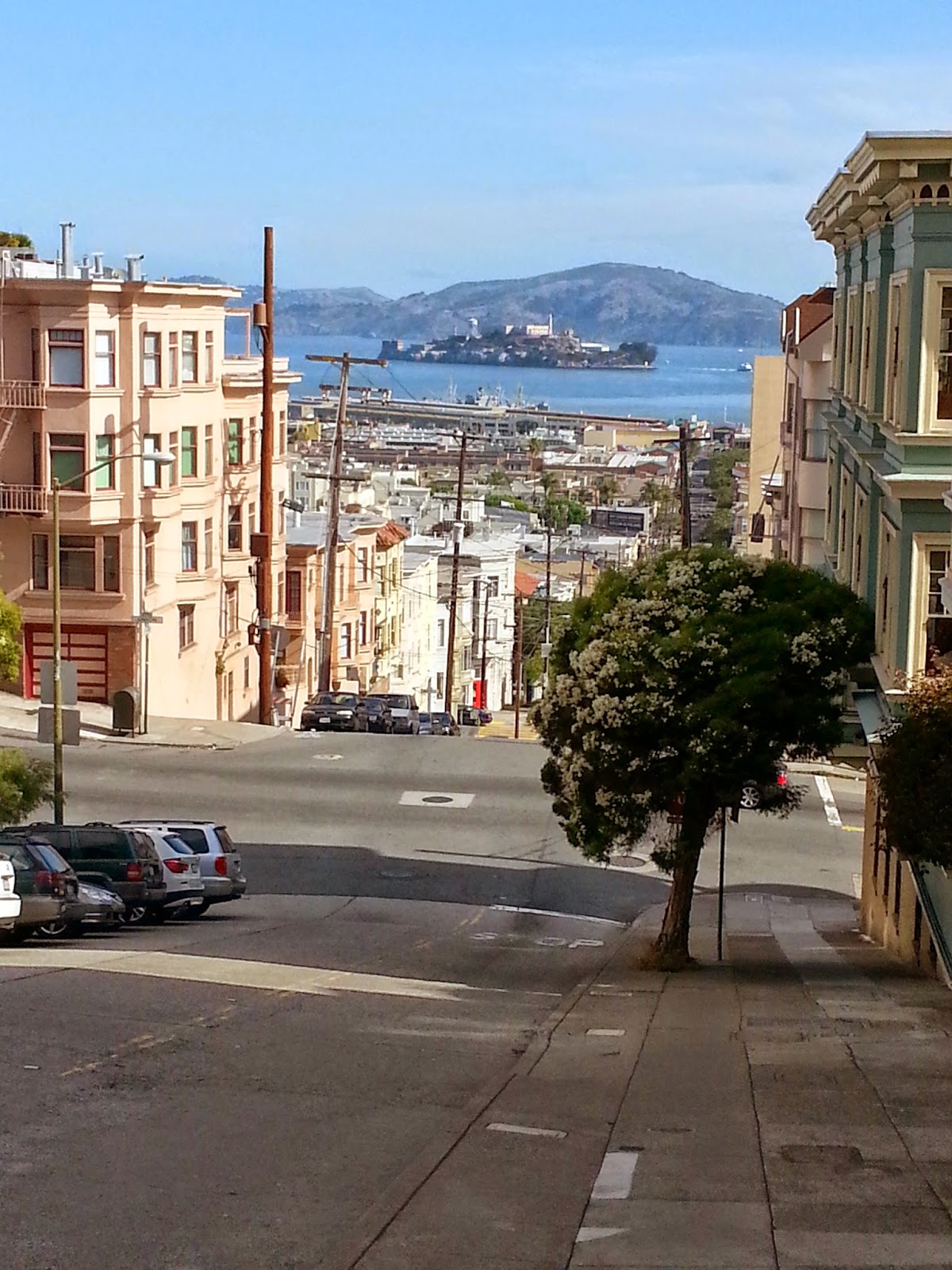 (View of Alcatraz before heading up to Macondray Lane) 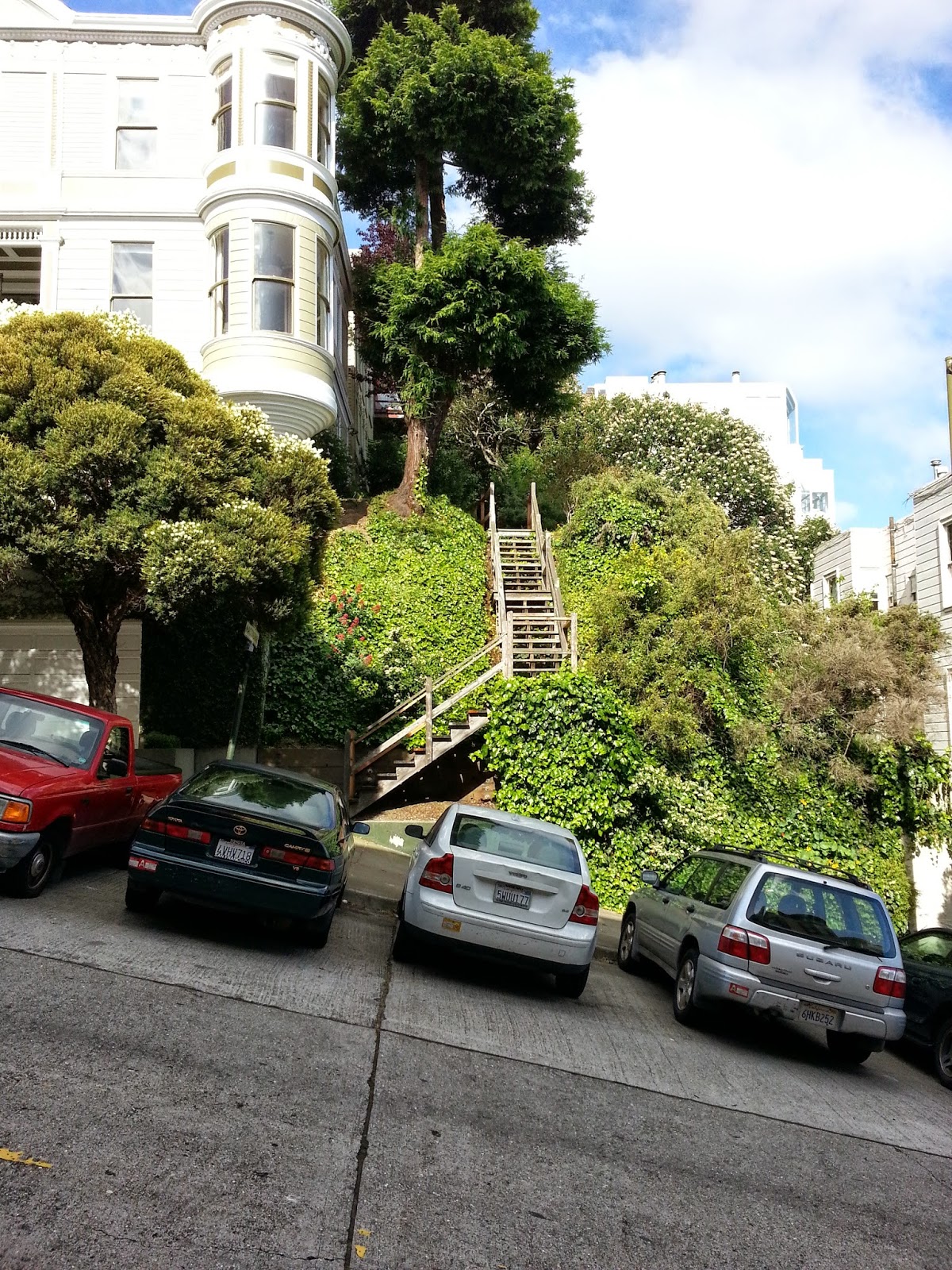 (Those stairs marked the beginning of Macdonray lane and check out that slope!  Did I mention we walked all over those crazy hills?  We quickly realized how out of shape we are!) 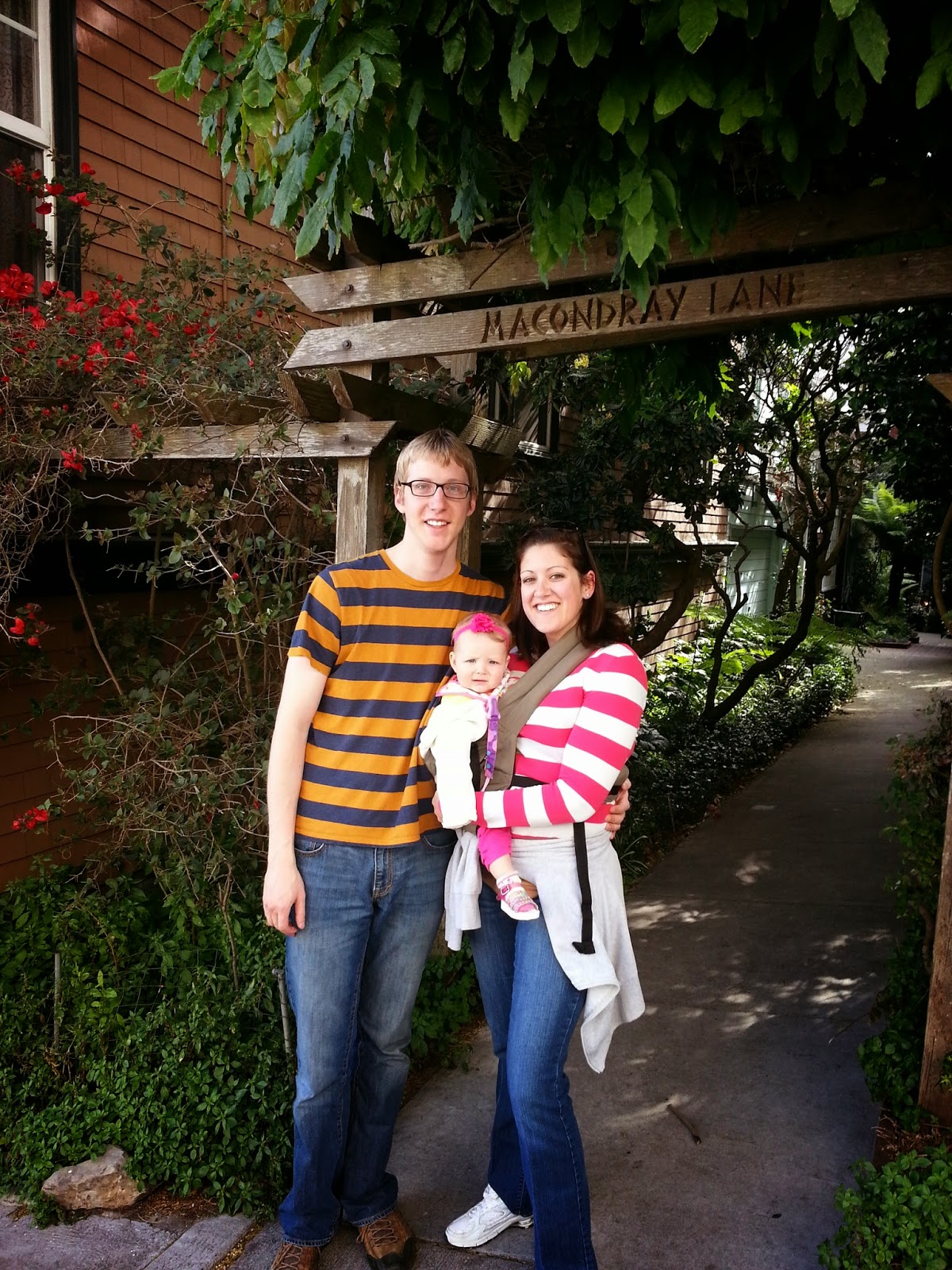 (Bean would switch back and forth between being "worn" in an ergo carrier and riding along in her stroller.  It just depended on if we were going to be riding a bus, doing lots of stairs, or nap time whether she was worn or riding.)

We continued walking around Russian Hill and looked at the architecture and views.  We got to see one of the few remaining octagonal houses - Feusier House. We walked to an overlook and saw more views of the bay, headed down the Vallejo steps and took a break in a "park".  I say it that way, because it was just a pedestrian path with little trees and benches.  I think the kids playing and the lady doing tai chi made it a park.  After our break, we headed to a bus stop that would take us to lunch -- Cheese Plus!  It was delicious.  It's a little shop that makes its own cheese and sells sandwiches and coffee.  It took me back to my Paris days eating baguette sandwiches. 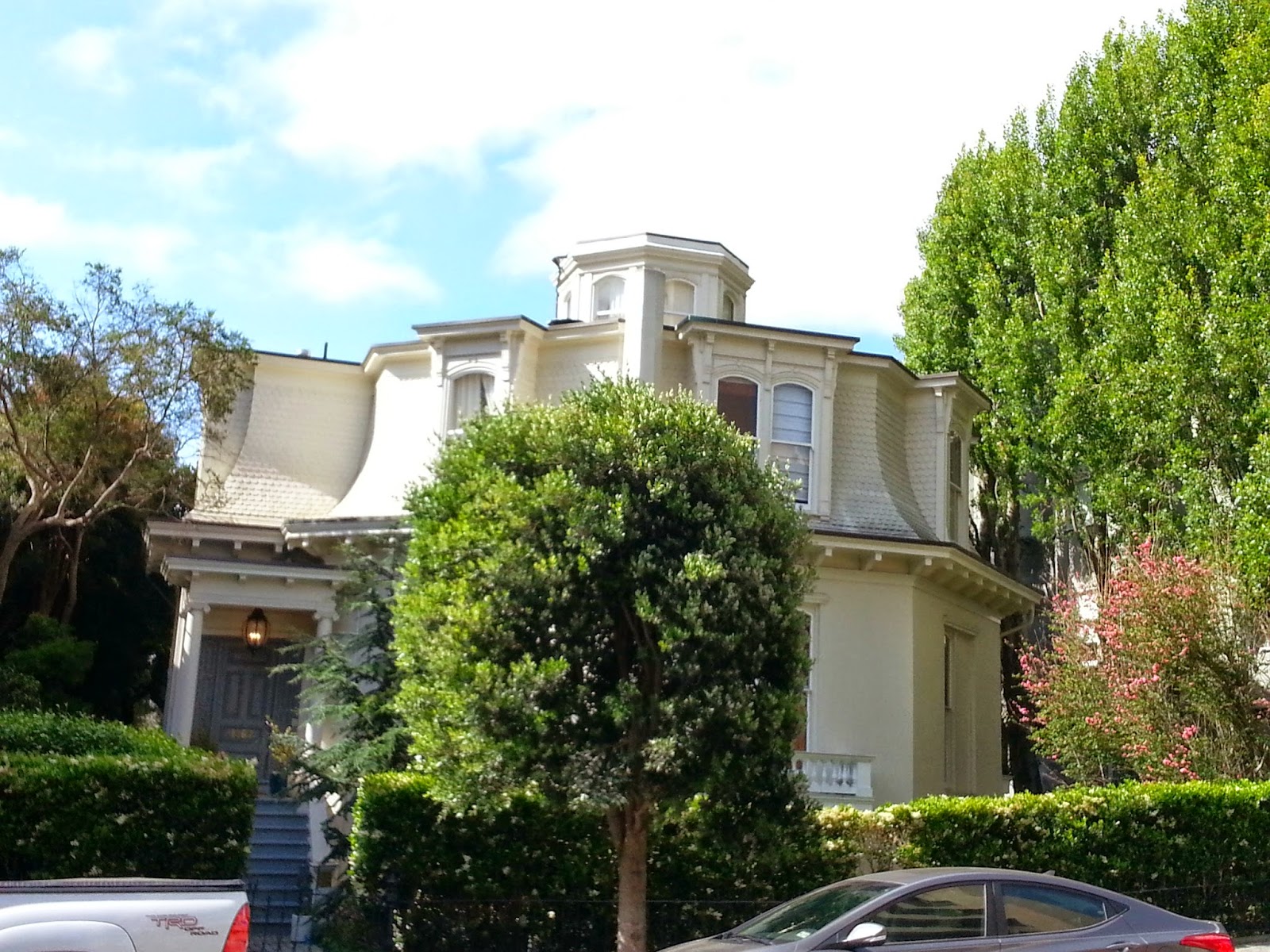 (Feusier House - it is one of only 2 surviving octagonal houses in San Francisco.  Octagonal houses used to be a fad in the mid 19th century.  It was designed as an octagon so that sunlight could come into every room.  It is the oldest house on Russian Hill and survived the 1906 earthquake.) 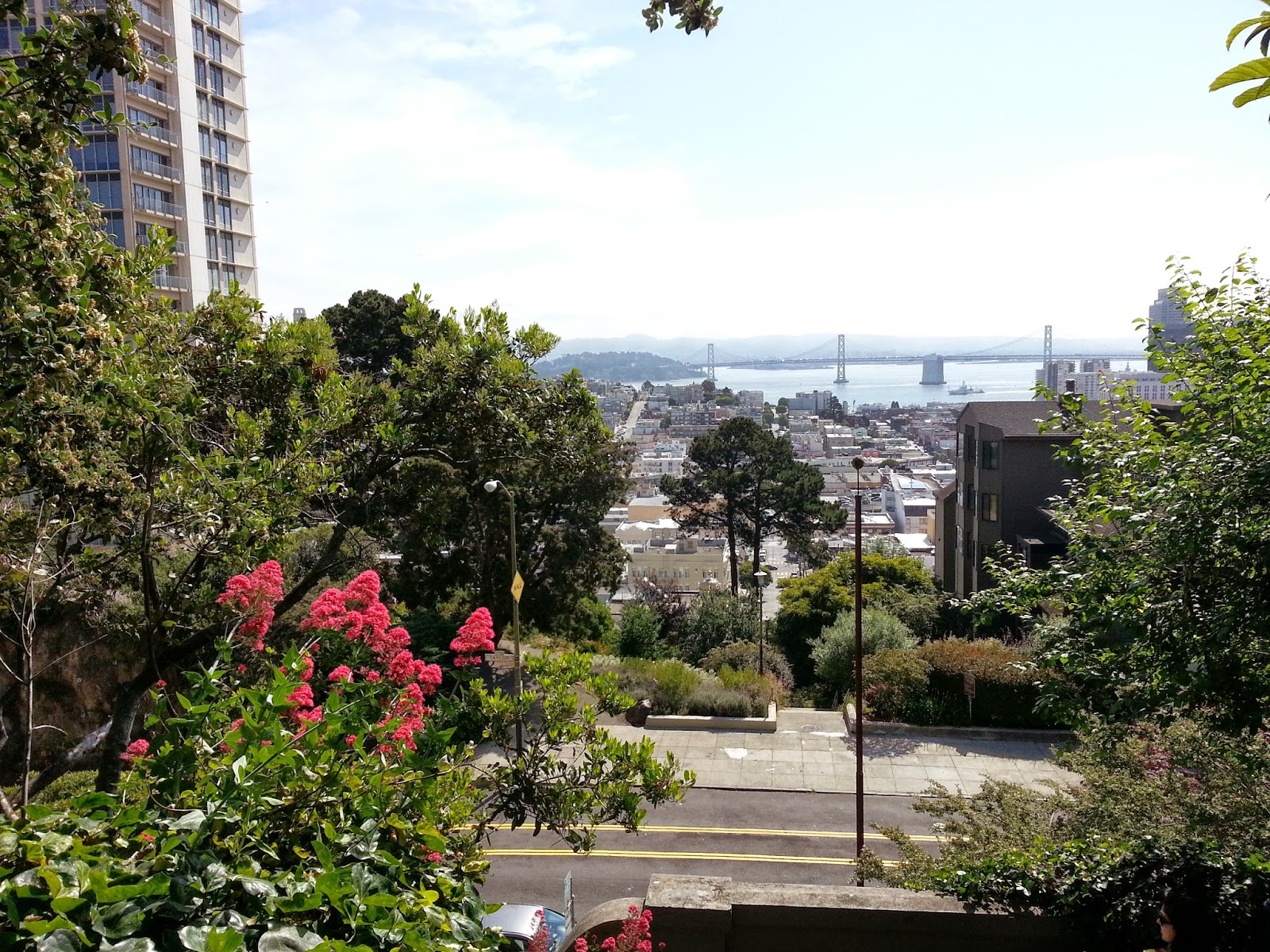 (View from the top of Vallejo steps.  The trees past the road mark the "park" where we took a break.)

From Cheese Plus, we took a bus to get us to Lombard street.  Lombard street has a one block section that is full of 8 hairpin turns.  It looked pretty crazy.  I'm glad we weren't trying to drive on it!  Cars had to take it really slow, and there were lots of tourists standing around watching.  Other cars would get frustrated and honk because of all the commotion blocking the road.  We hopped on a cable car from there and headed to the wharf.  I must admit I wasn't too impressed with the cable car.  I think under different circumstances I would have enjoyed it more.  I was "wearing" Bean with the carrier, and the conductor made someone give up their seat for me (which I'm fine standing with her since I don't have to hold her with my arms, but I just took the seat and didn't argue).  But by taking the seat, I couldn't really see anything.  So I just felt like I was in a little compartment on a bus.  Steve enjoyed it, and I can say I rode a cable car. 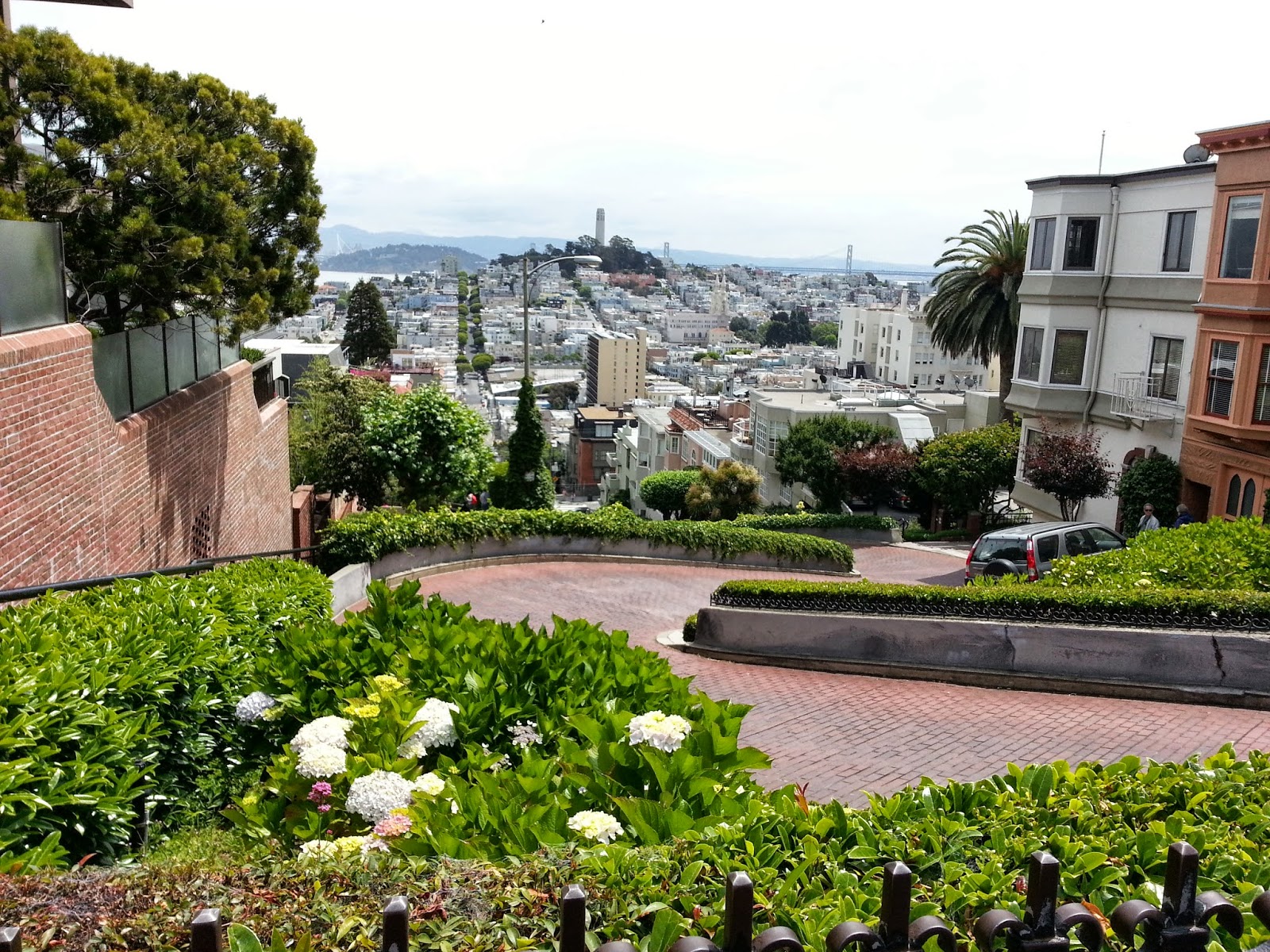 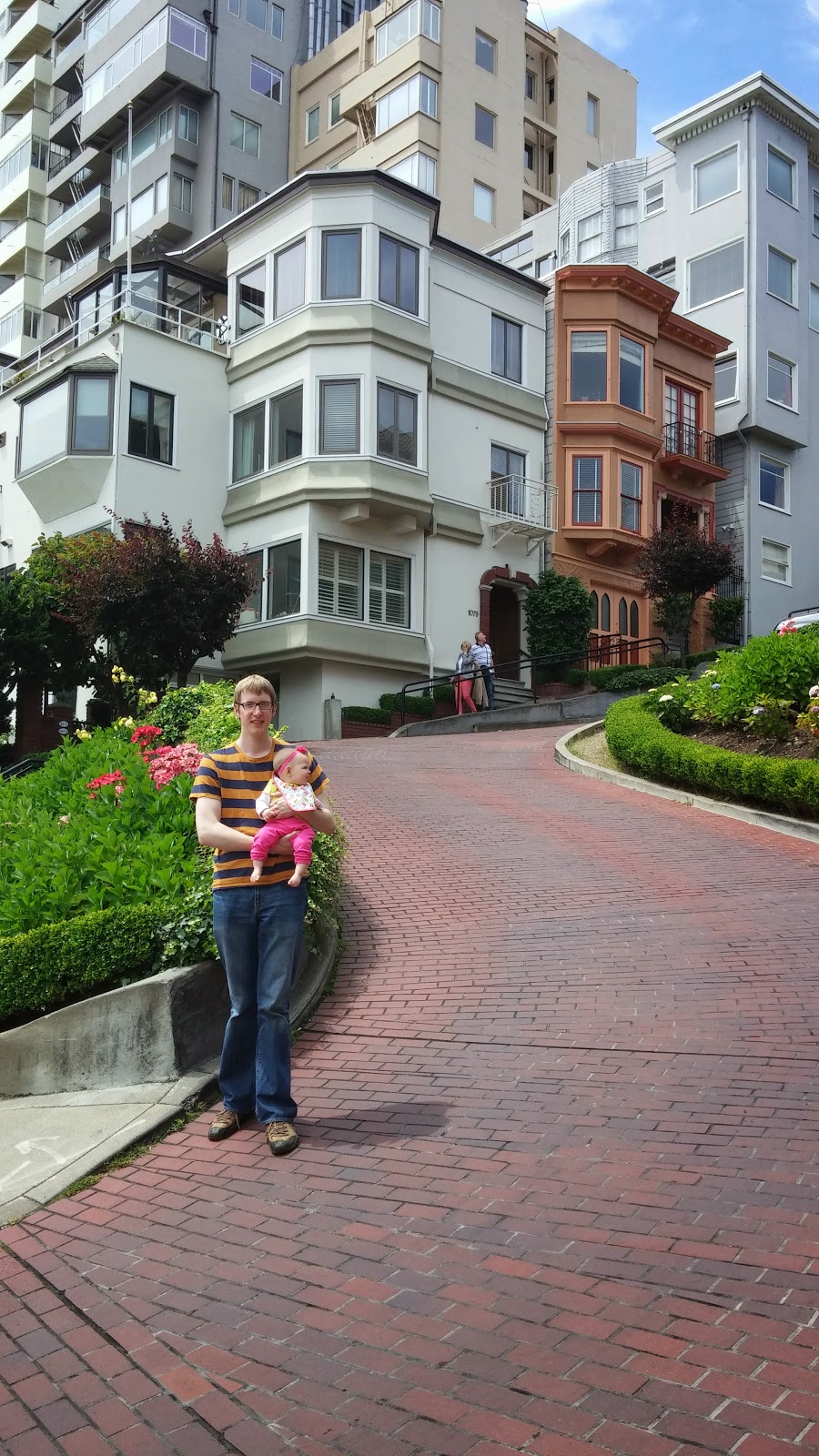 When we got to the wharf, we followed our noses and hit up Ghiradelli Square.  We of course stopped and got a chocolate strawberry sundae to share.  Bean must have been mad at us for not sharing and decided to grab at a full cup of water sending water everywhere.  Luckily, I had just moved myself and the backpack, so the water just poured off the table onto the floor. 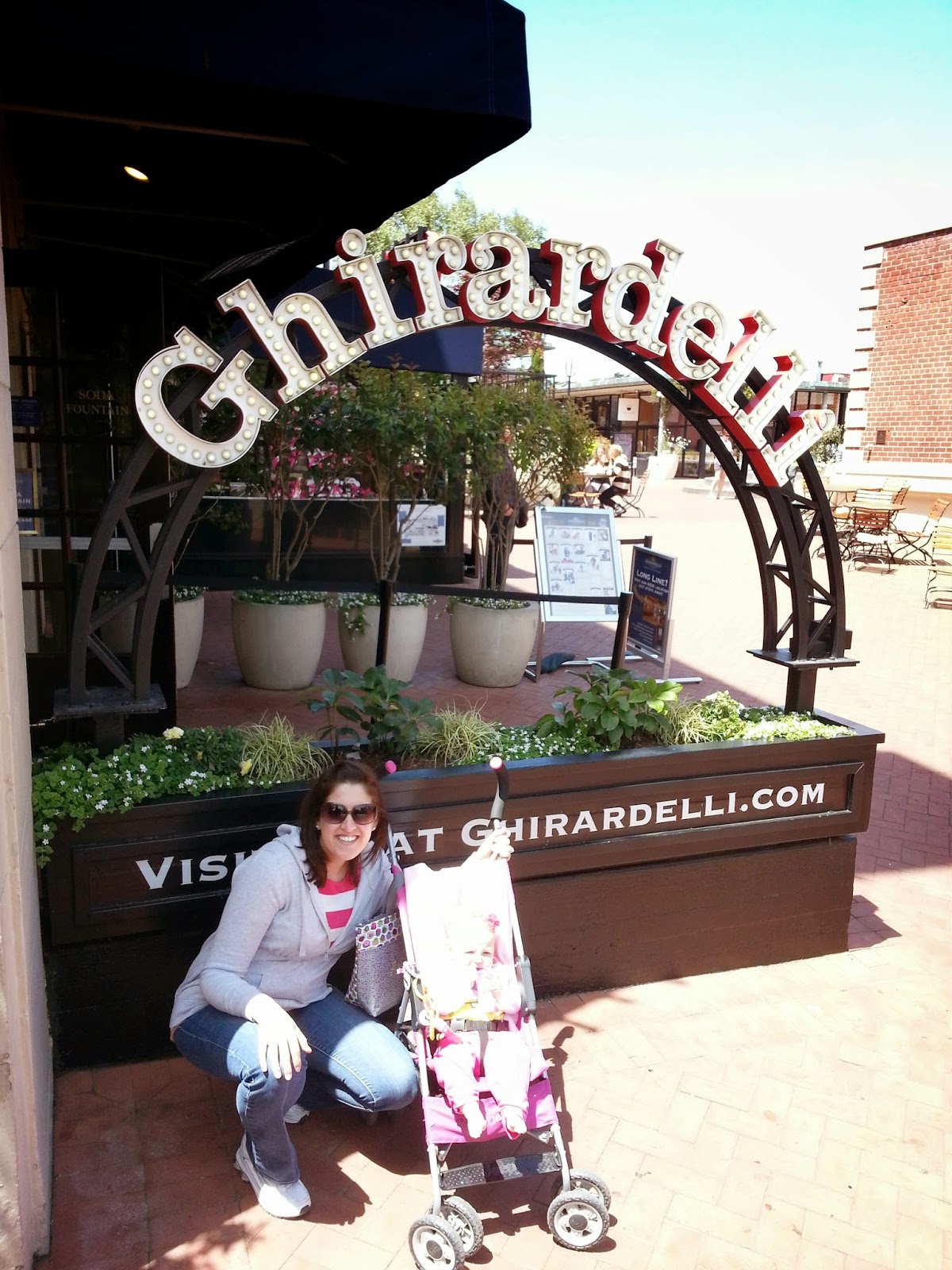 (Ghiradelli Square!  It smelled so good outside!  Poor Bean washed out in the sun, ha!) 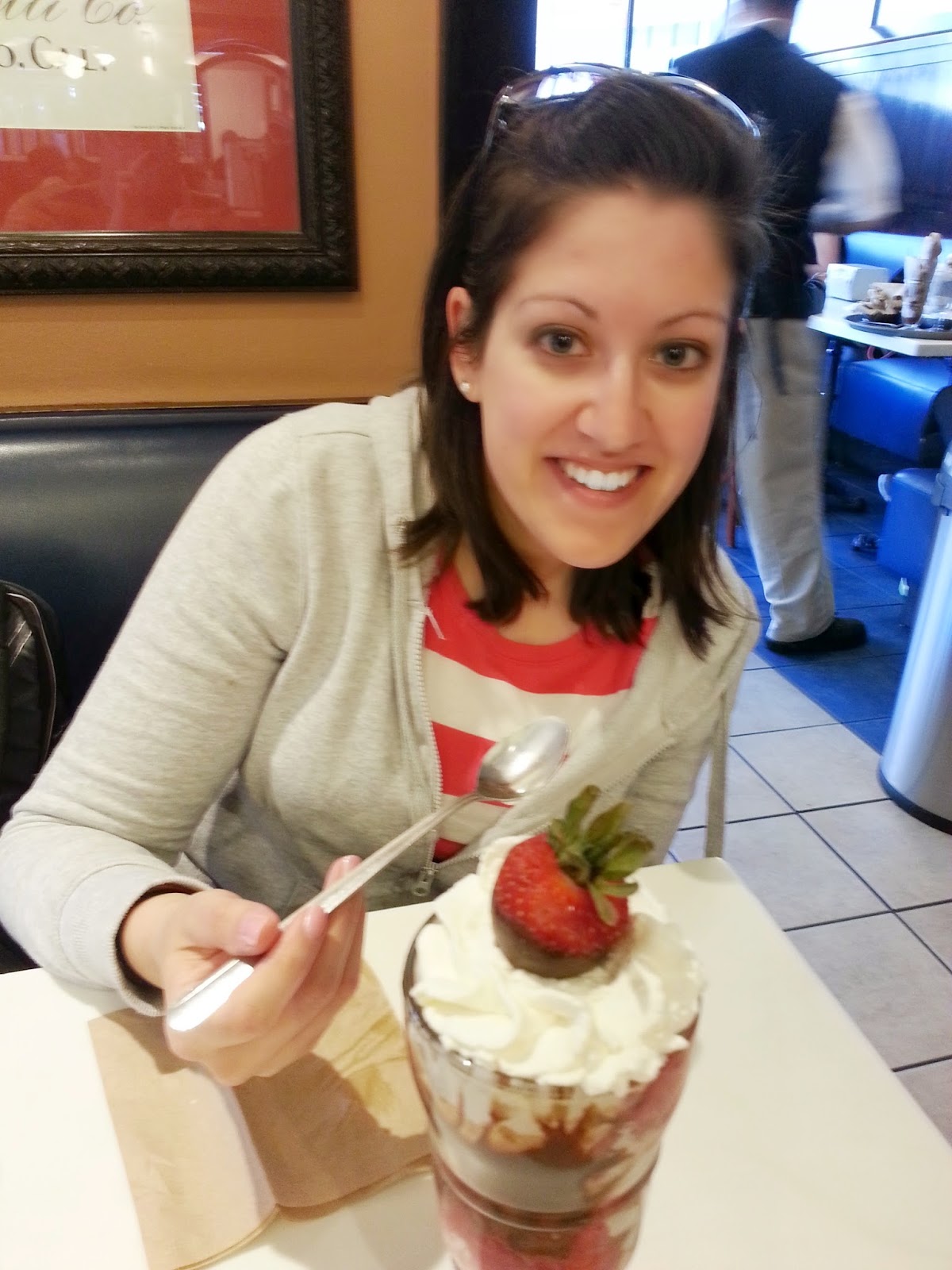 (Even though I would have liked to eat the sundae all by myself, we shared it.  Yum!)

After Ghiradelli, we walked over to the Maritime visitors center and learned about the history of the wharf and San Francisco's fishing industry.  From there, we walked out onto Hyde Street Pier and got to go on some old ships. 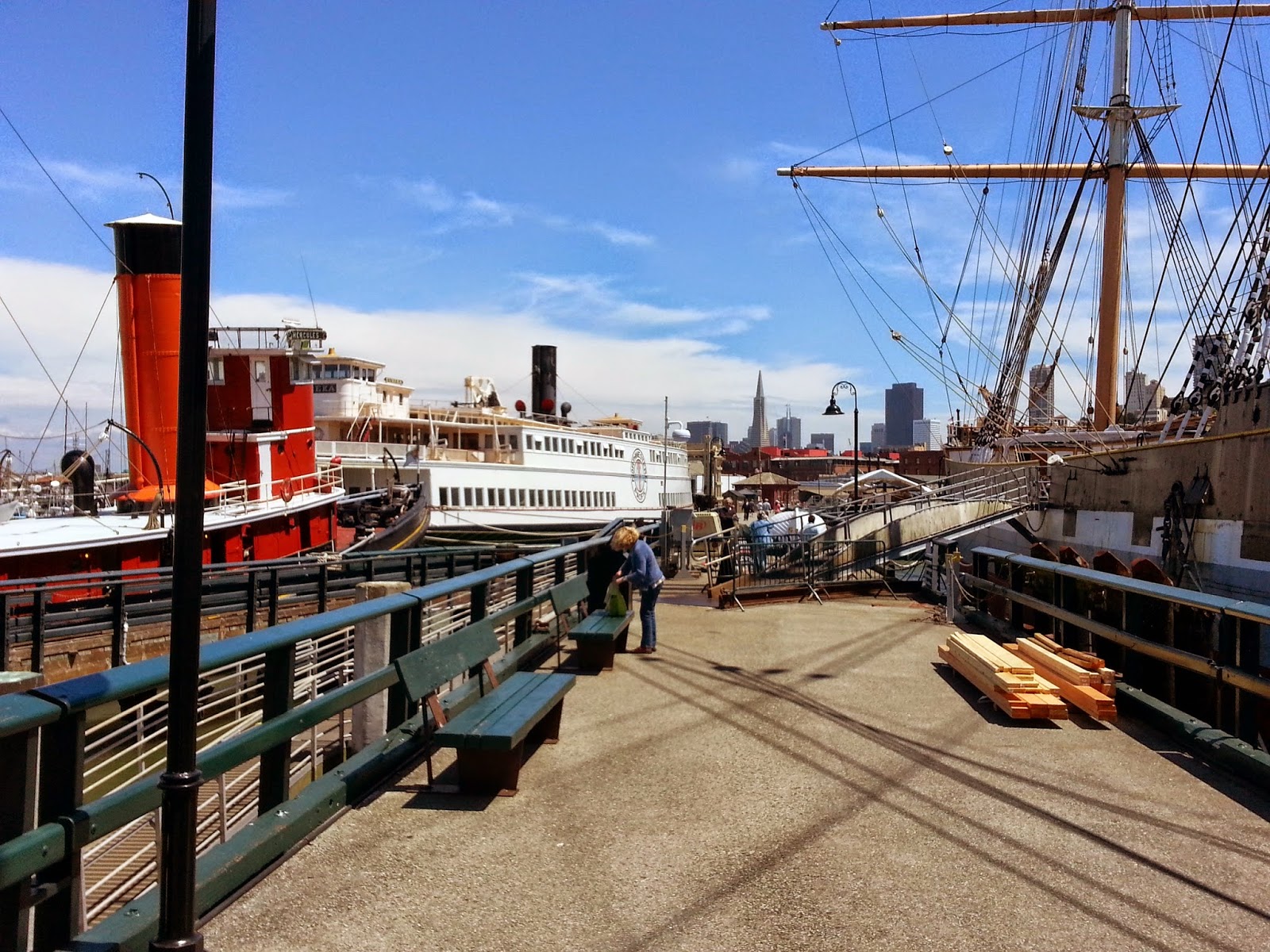 (Hyde Street Pier -- we really wanted to go on the big white boat, but it was closed for refurbishment.  We did get to go on a cargo ship - on the right - which was set up pretty neat.  In the cargo area, they had little sections set up as if it were hauling a specific product - canned salmon, wheat, etc.  There were little videos and screens with information.) 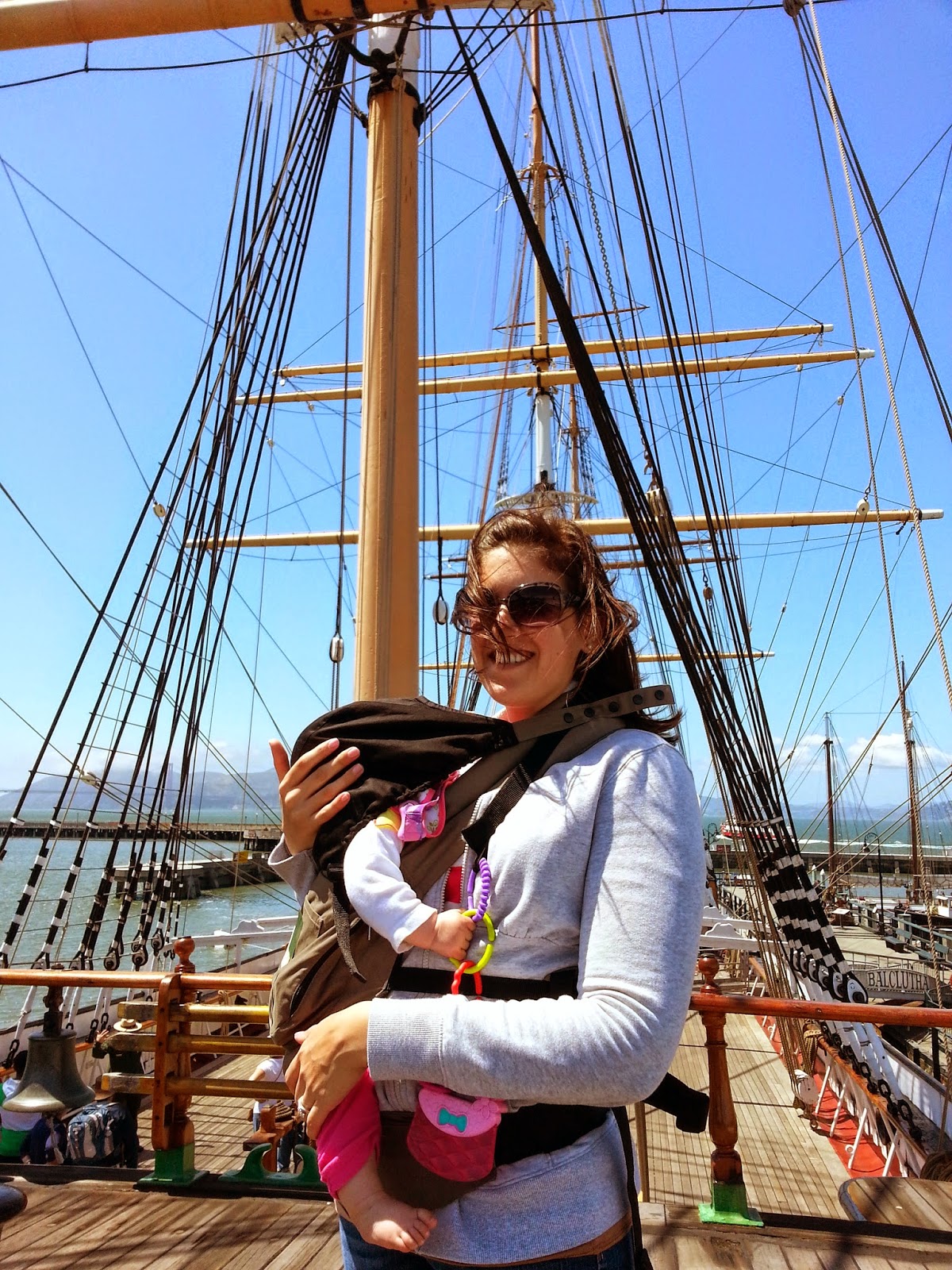 (It was a little windy up on the ships! Bean was able to fall asleep while I was wearing her.  I love that the ergo has a little "sun shield" that you can put over baby's head.  It really helped to cover her from the wind!)

We then continued towards Fisherman's Wharf and hit up the Musee Mechanique.  It's pretty much a warehouse full of old coin machine games.  They ranged from old machines that played music, had movable parts like puppets, to games, to dirty pictures.  We got $5 in quarters and went to town.  We had a blast trying to beat each other on some race games, enjoyed music machines, and enjoyed looking at how far technology and entertainment has come. It was a little too early to eat dinner, so we walked down to Pier 39 to check out the seals.  We had to wade through the chotsky shops to find the seals, but we finally did.  After watching the seals we headed back to the wharf area to eat at Boudin bakery, known for it's sourdough bread bowls.  Yumm! 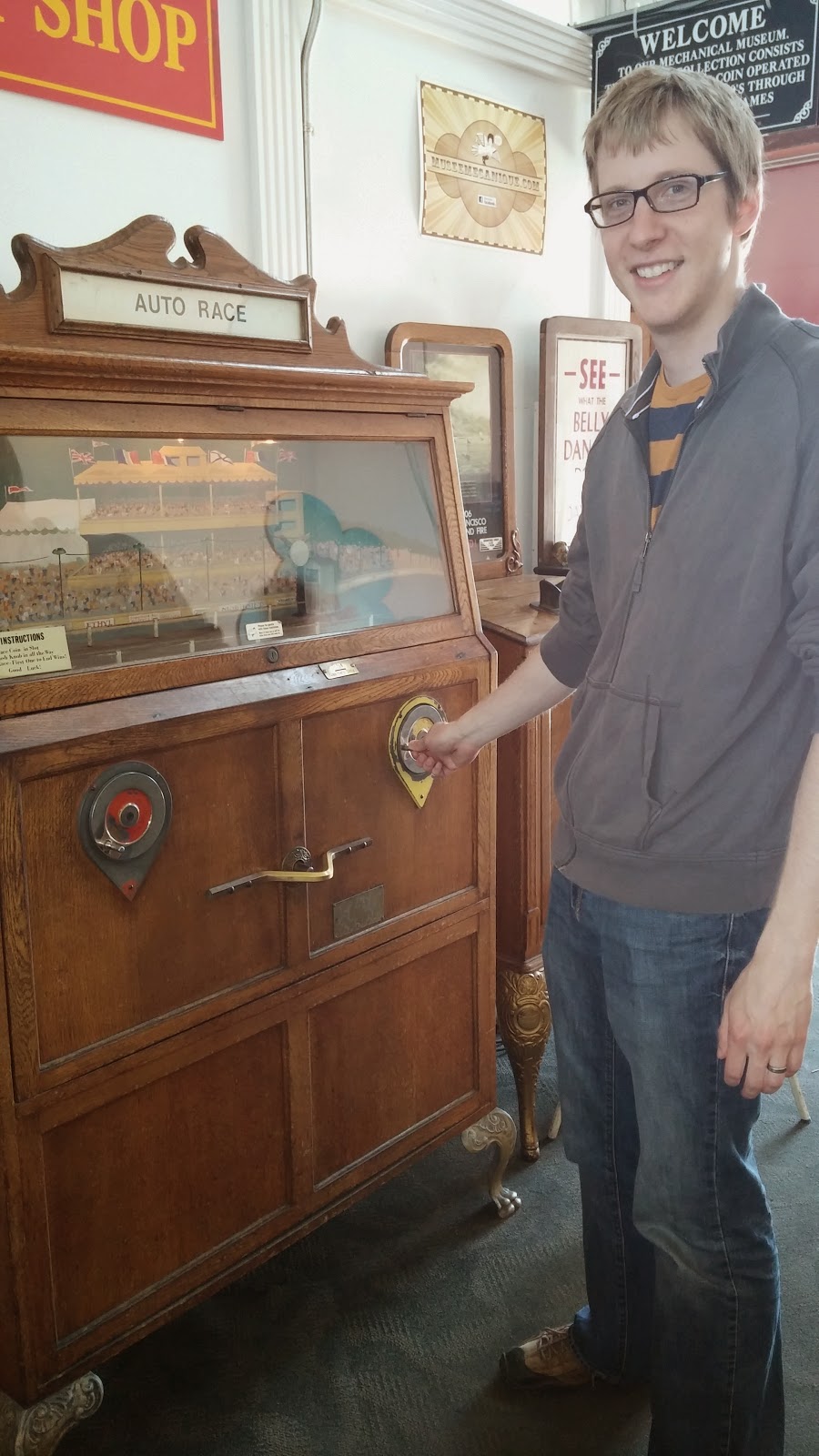 (About to race each other on a game) 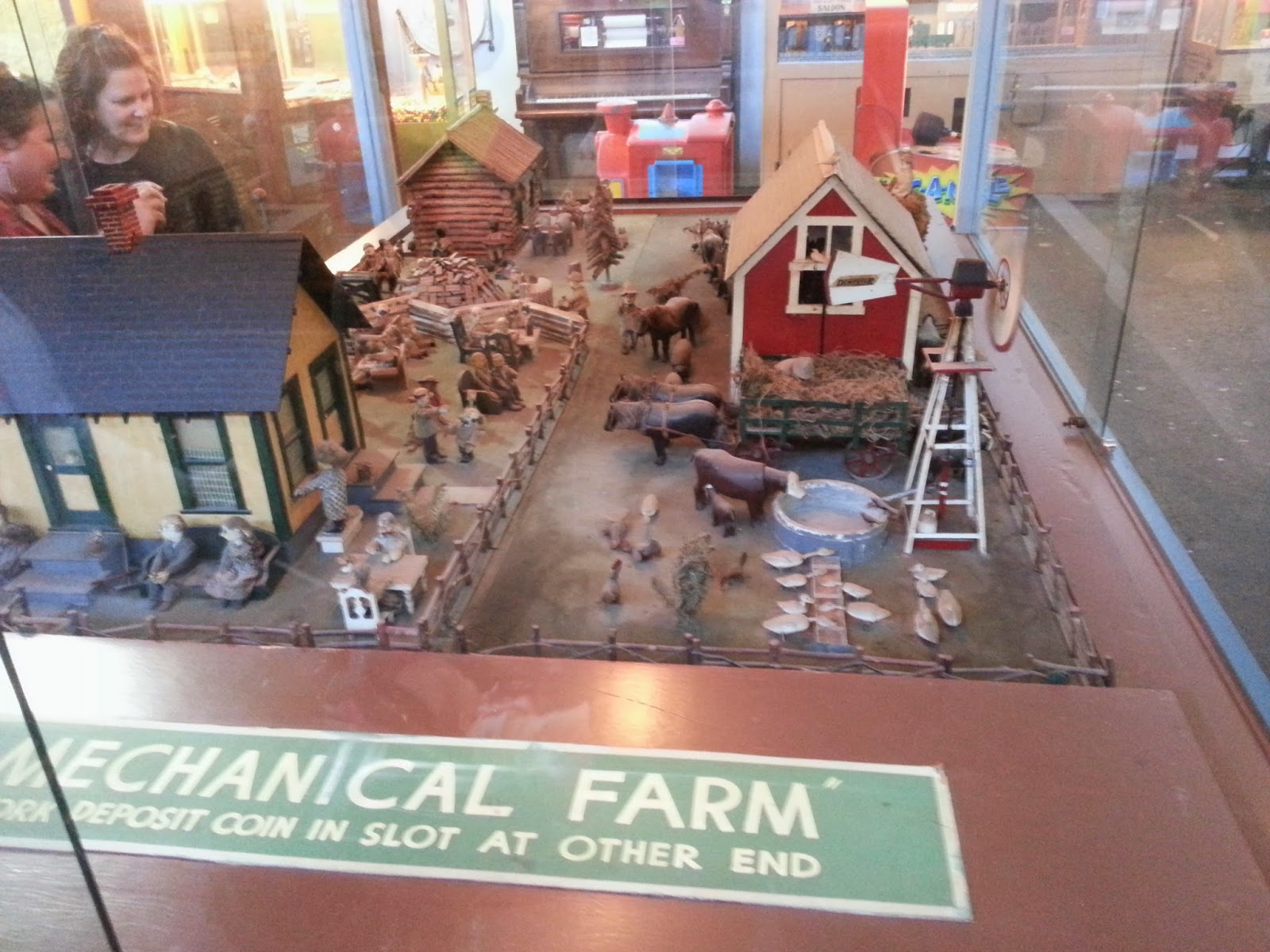 (This was the biggest machine and was set in the center of the room.  When you put in the money - maybe $.75? - all the animals and people on the farm started moving around.) 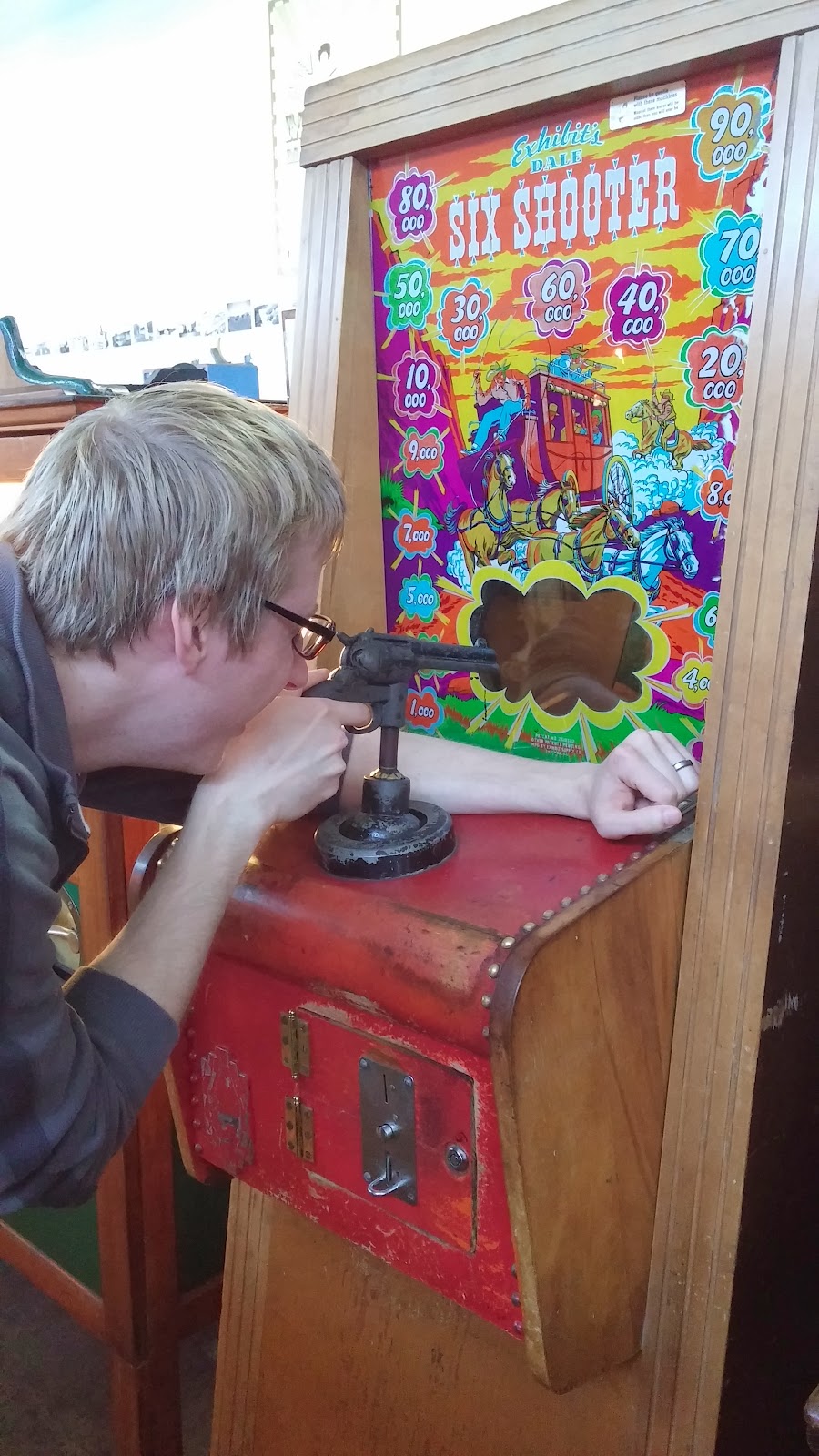 (Steve playing a shooting game.  He said this one was really hard.) 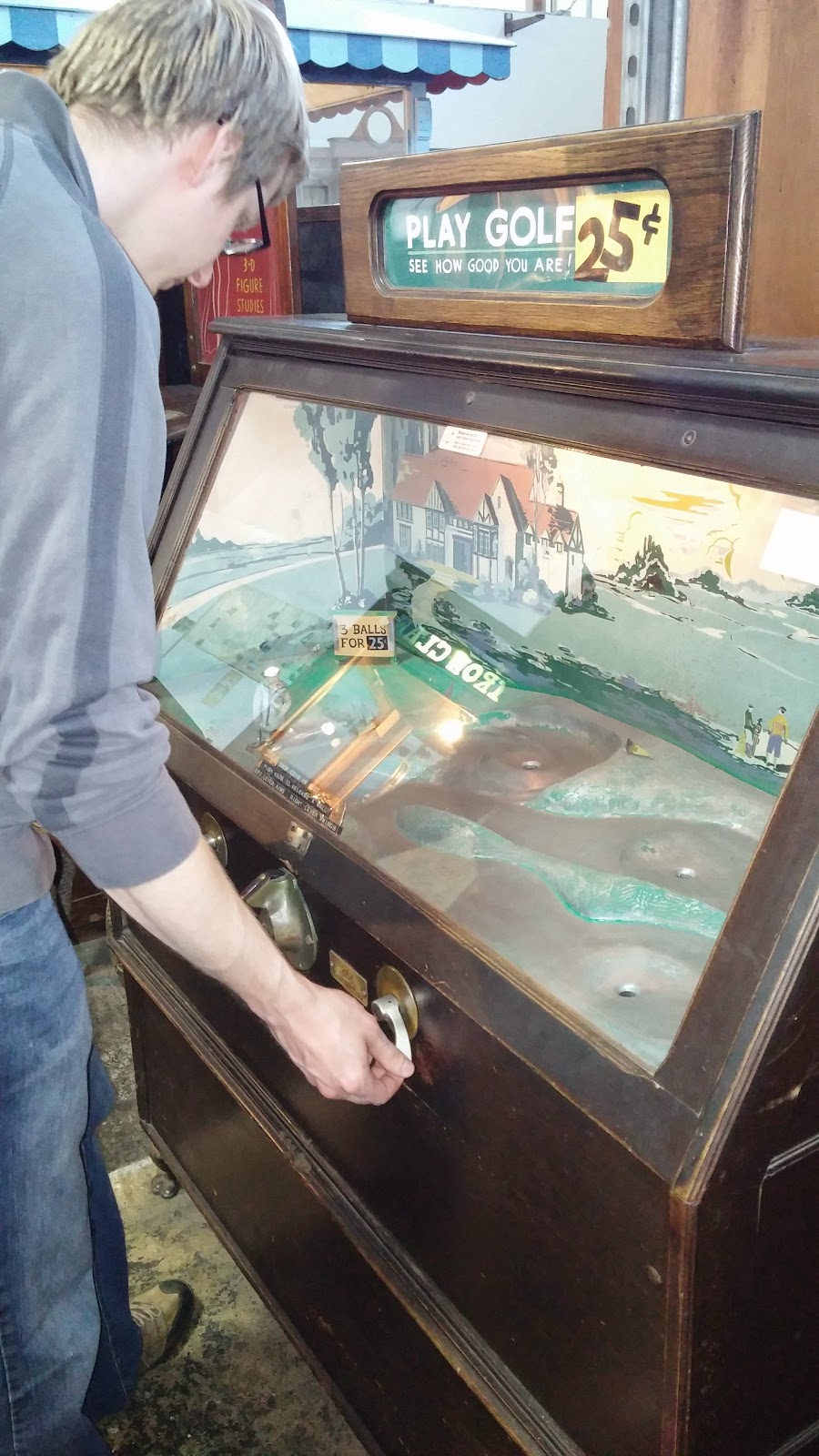 (We played a golfing game and took turns.  One quarter got us 3 golf balls!  Not to brag, but I got a ball in one of the holes before he did) 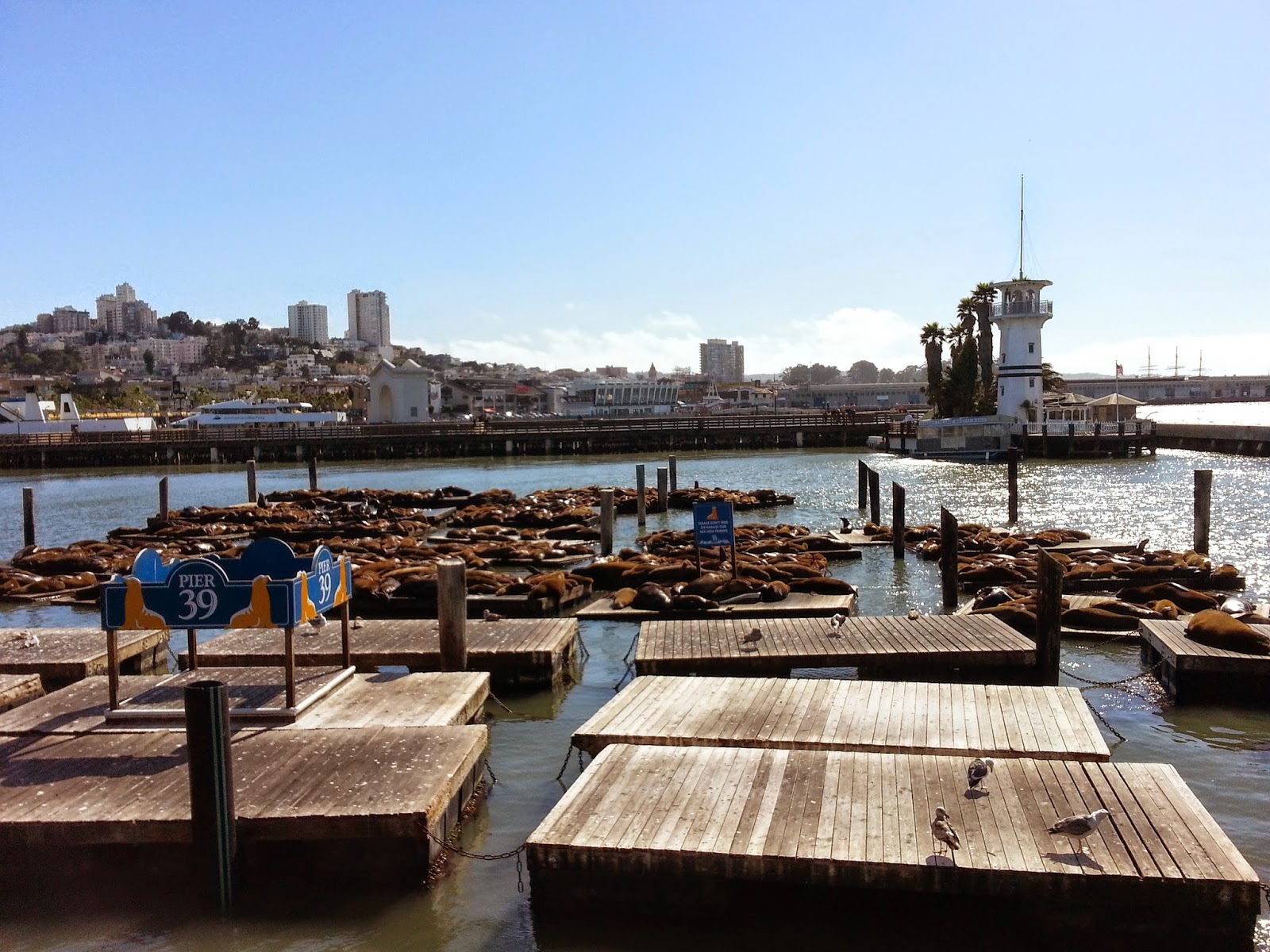 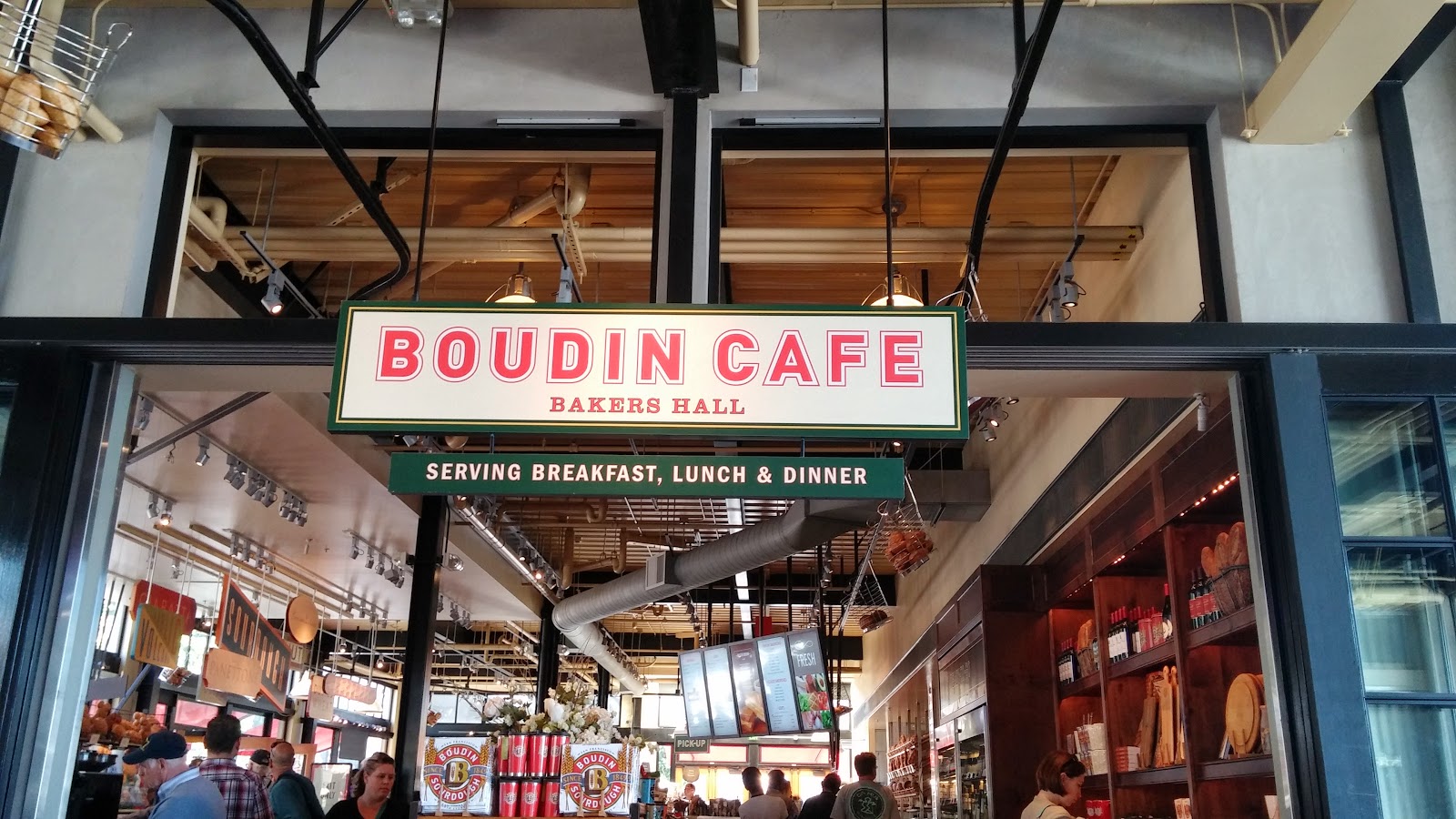 (Boudin Cafe!  I meant to take a picture of our food, but we were both really hungry and chowed down on it before I thought about taking a picture.  Oops) 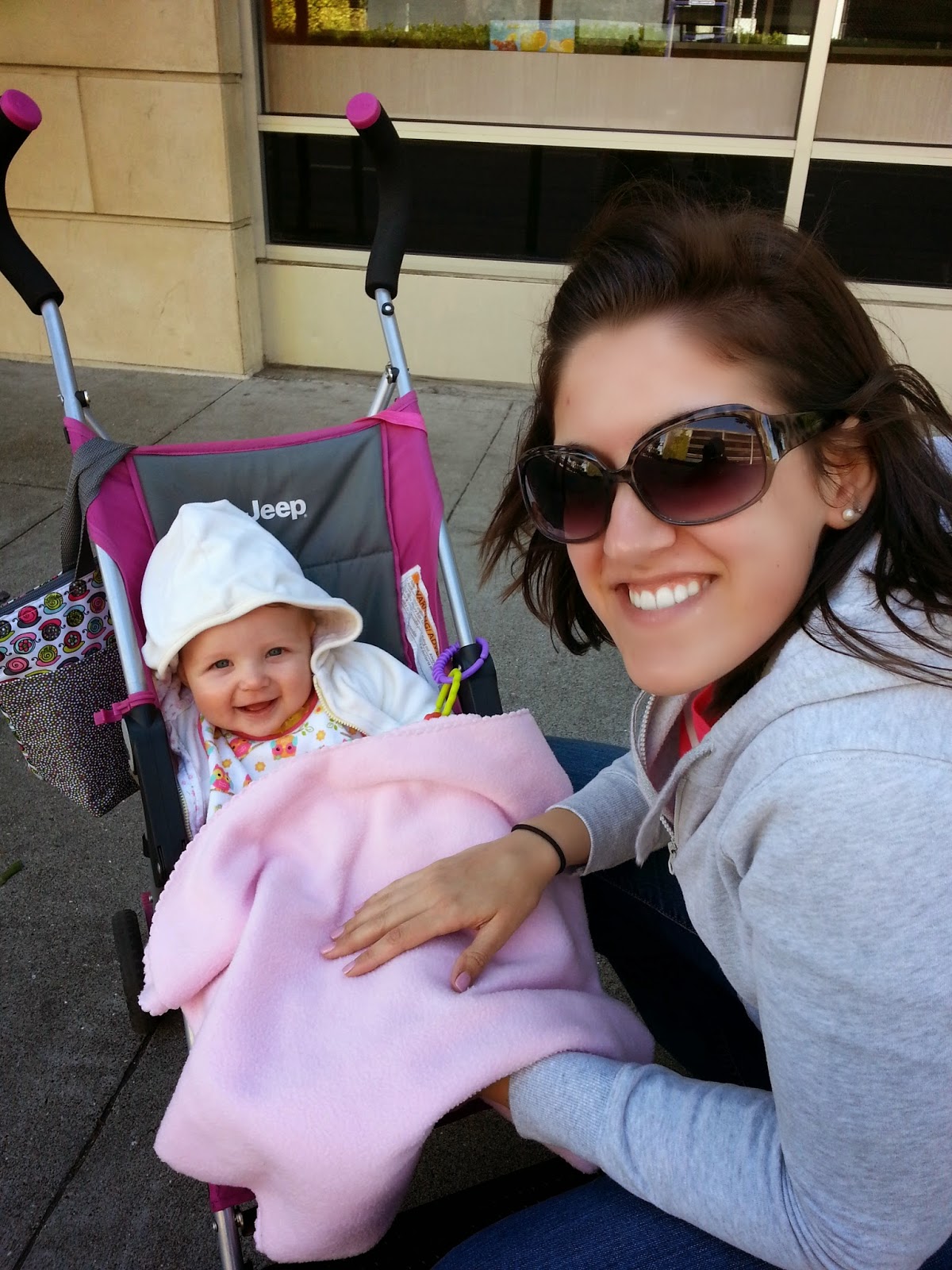 (We found a bus stop to take us back home and had to wait in the cold shade.  I tried to warm up Bean, but she kept kicking the blanket off.  Once we got to our apartment, we crashed after our long day!)
Posted by Unknown at 1:29 PM