On our last day in San Francisco, we were able to meet up with Steve's brother Ian for the day.  We took the morning slow and made our way to our meeting spot.  We had quite the experience on the bus ride there involving a homeless man bumming a ride and upsetting the bus driver.  He refused to move the bus until the man was off, but the man wasn't all there and eventually another bus rider paid for the man. The driver didn't really care about the money, he was upset that the man had been doing it all week.

Before meeting with Ian, we jumped off the bus at Alamo Square Park to see the famous painted ladies.  We thought we had about 15 minutes until the next bus came, but it came in half the time and we couldn't get to it in time.  Since we missed that bus, we had to wait almost 20 minutes for the next bus.  Sorry Ian :) 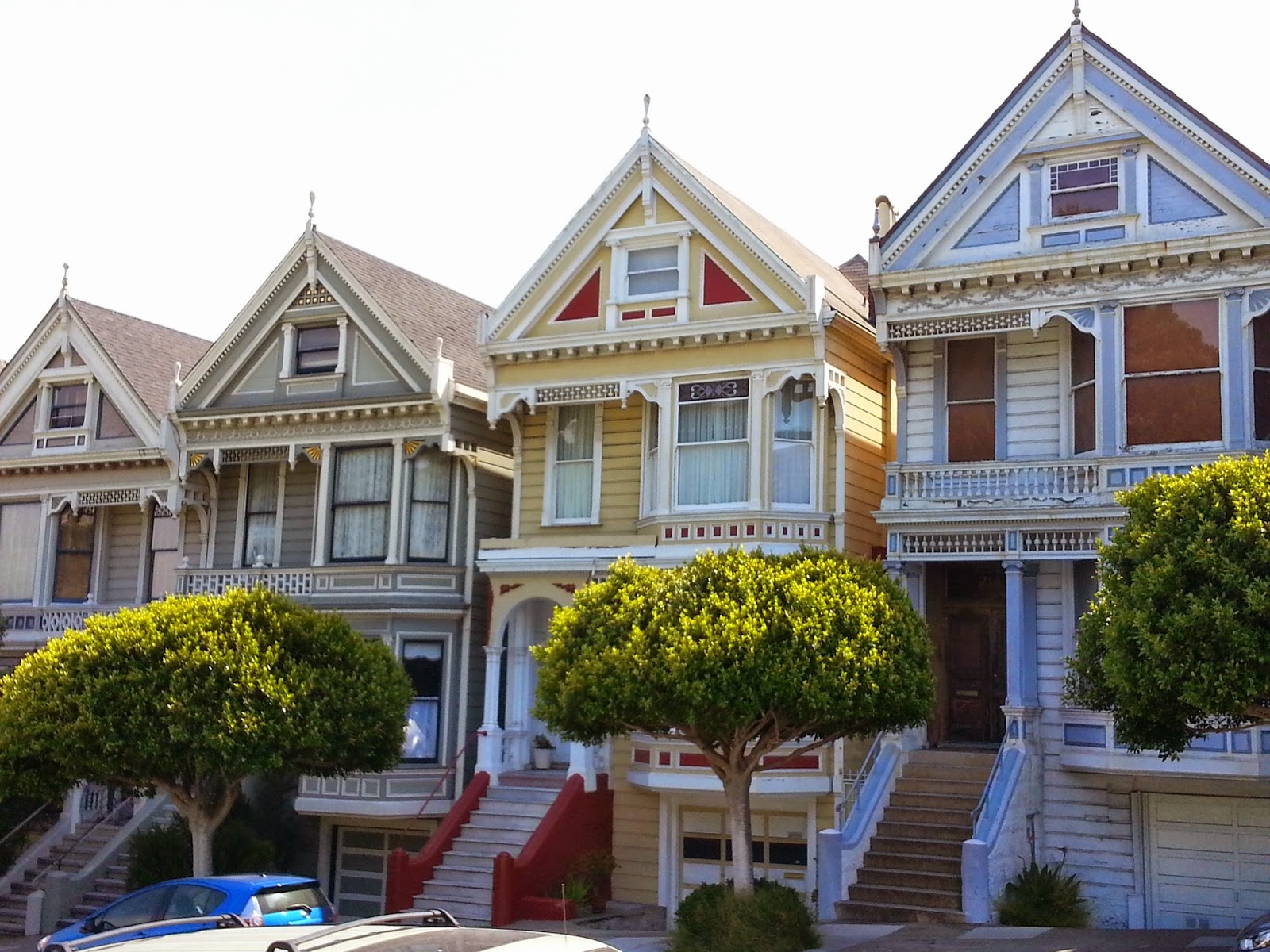 (These are the most famous painted ladies in San Francisco!  A painted lady is just a Victorian house that is painted in bold colors.) 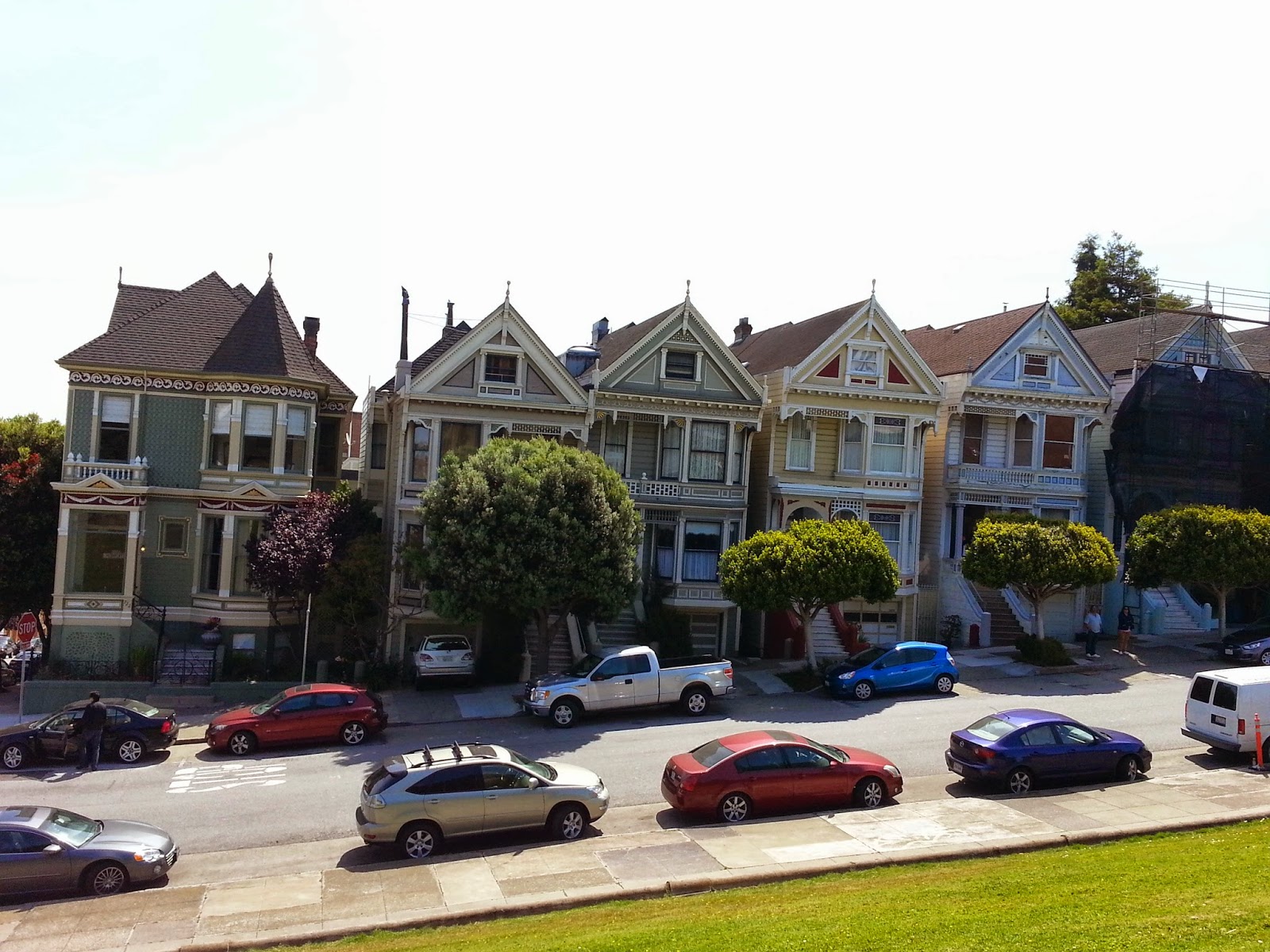 (It was around this time that we looked over at the bus stop and realized we were missing the bus, oops!  We are standing up on the hill in Alamo Square Park that is featured on the opening to Full House)

We met up with Ian and began our day meandering around Golden Gate Park.  We had anticipated the weather to be warmer than it was and wished we had brought more layers with us (Ian was in shorts!).  It was really overcast and foggy in the park which made it seem much cooler.  While walking around the park, we came across a yo-yo competition and watched a few of the competitors.  We continued walking and hit different areas of the park - the buffalo paddock, dutch windmill, walking trail around a pond, and even had to walk through a frisbee golf course.  In the middle of all that walking, we walked to a Chinese restaurant and warmed up with some yummy food (I had some raspberry sweet and sour chicken, and it was amazing!). 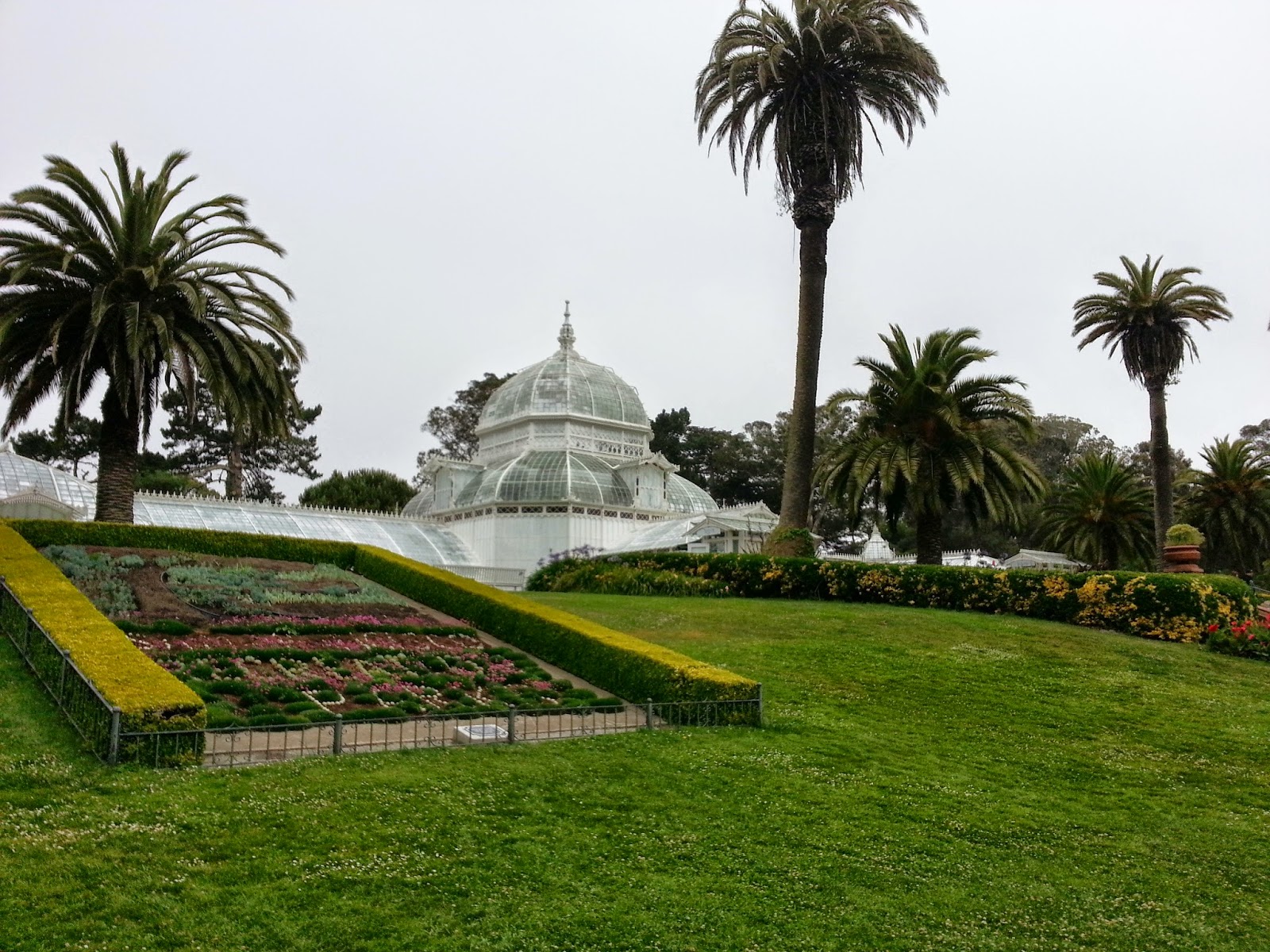 (We debated on going through this flower garden, but were too cheap to pay the price.  We just enjoyed the pretty flowers in the landscaping instead.) 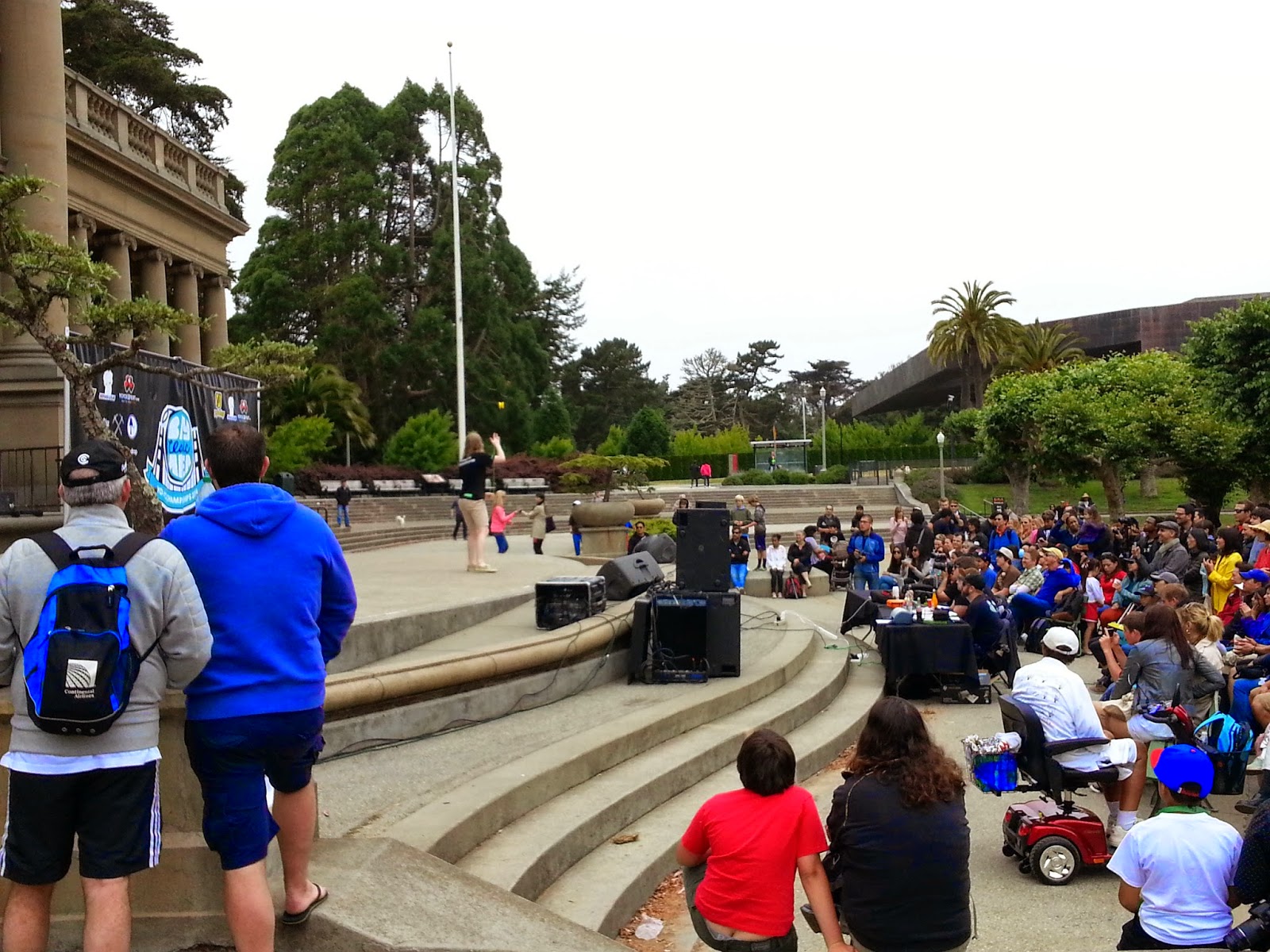 (Being shoobs and watching the yo-yo competition.) 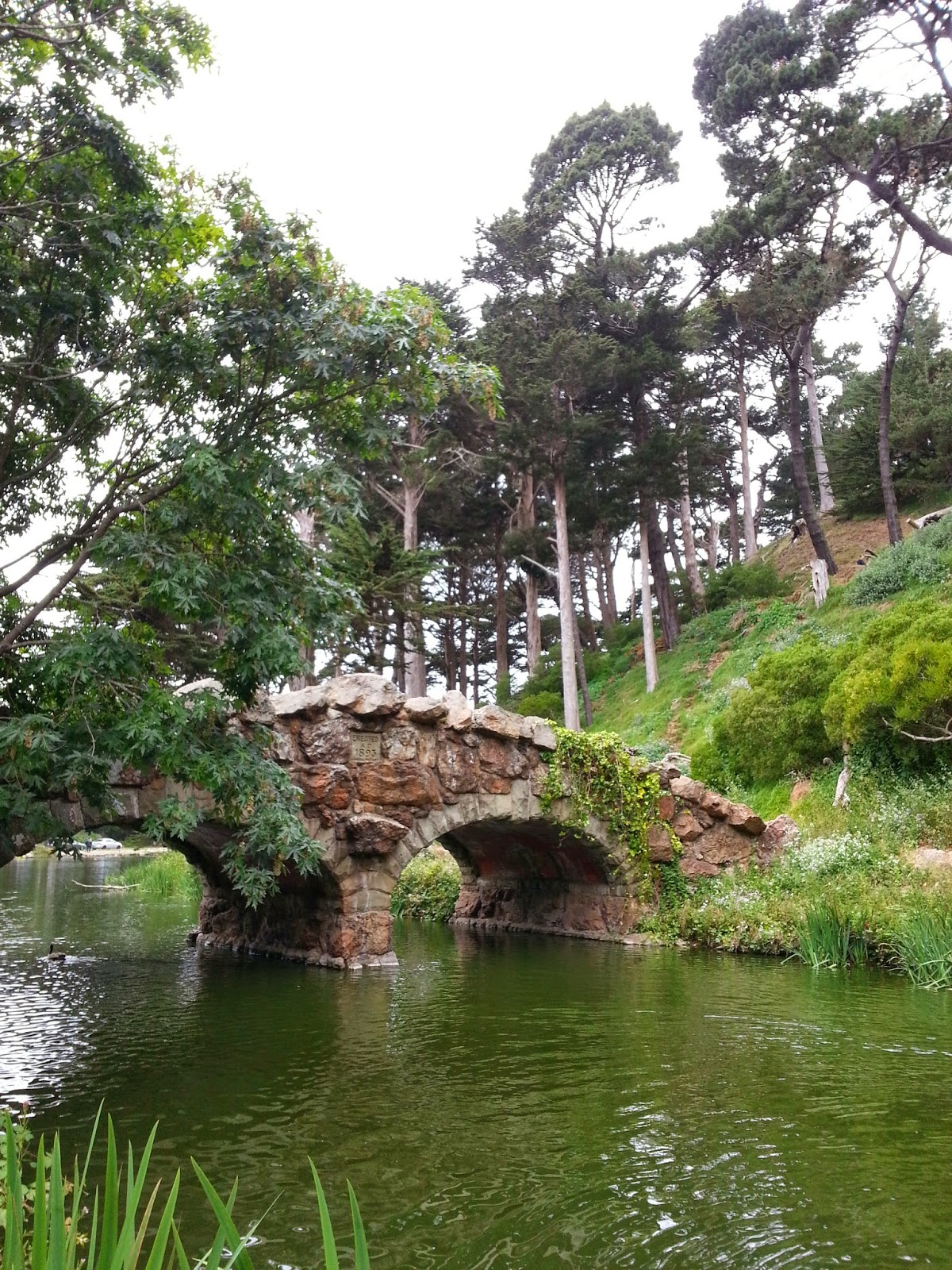 (Pretty bridge by the pond we walked around.  You could rent paddle boats and go around the water, but we decided it'd be too hard to balance Bean in her stroller on a boat, haha, I kid.) 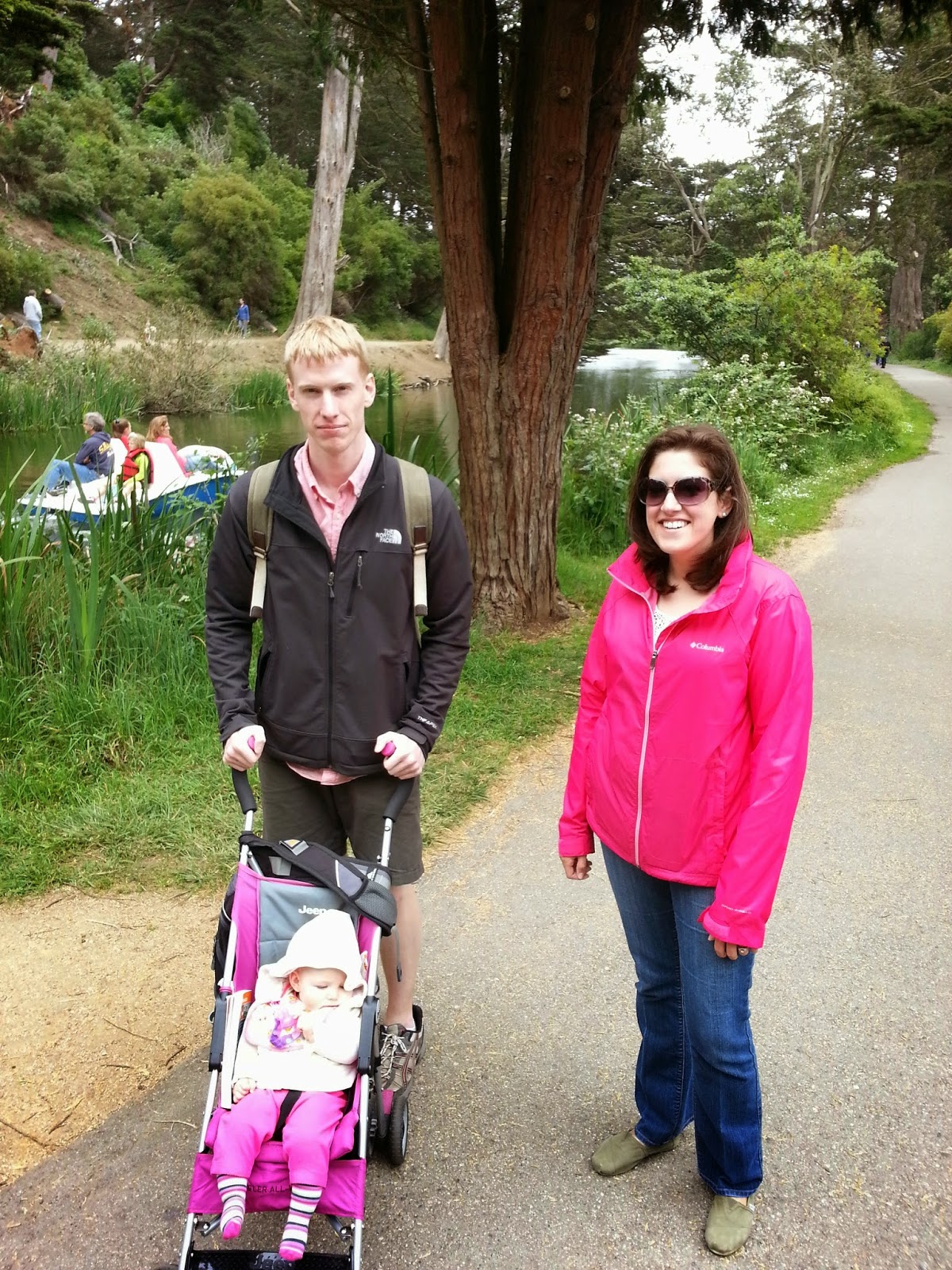 (Uncle Ian pushing Bean!  Check out those socks!  Those are the ones that are like knee-highs and hard for her to get off.  We had to keep her pretty bundled in the cold weather!  This was probably our coldest day.) 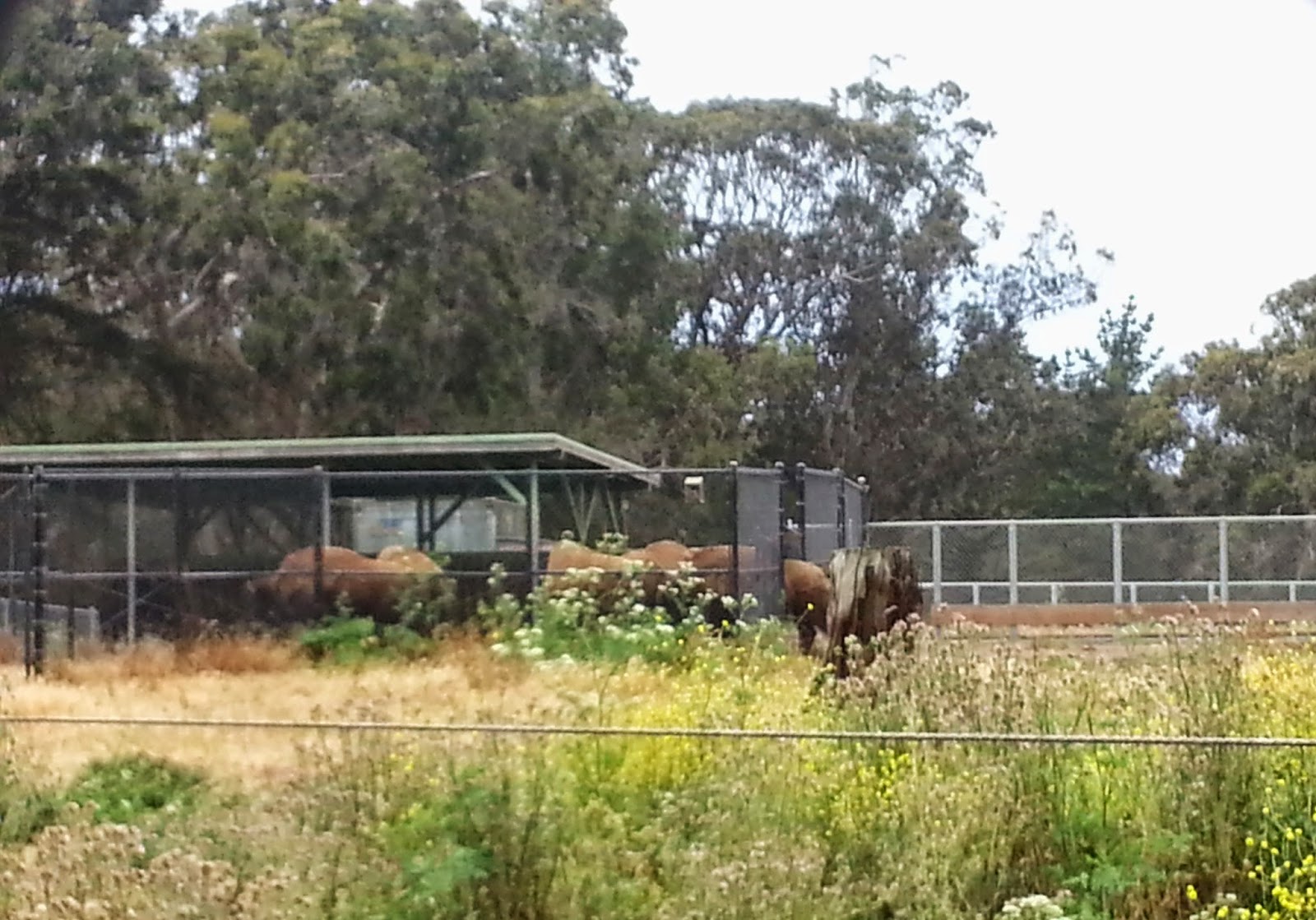 (The one thing I wanted to see in the park -- the buffalo! And what a disappointment. Haha.  I had it in my head they would be roaming around and I could see them up close.  I guess they could walk around that whole pasture but they were all just staying up in their stalls, lame-o.) 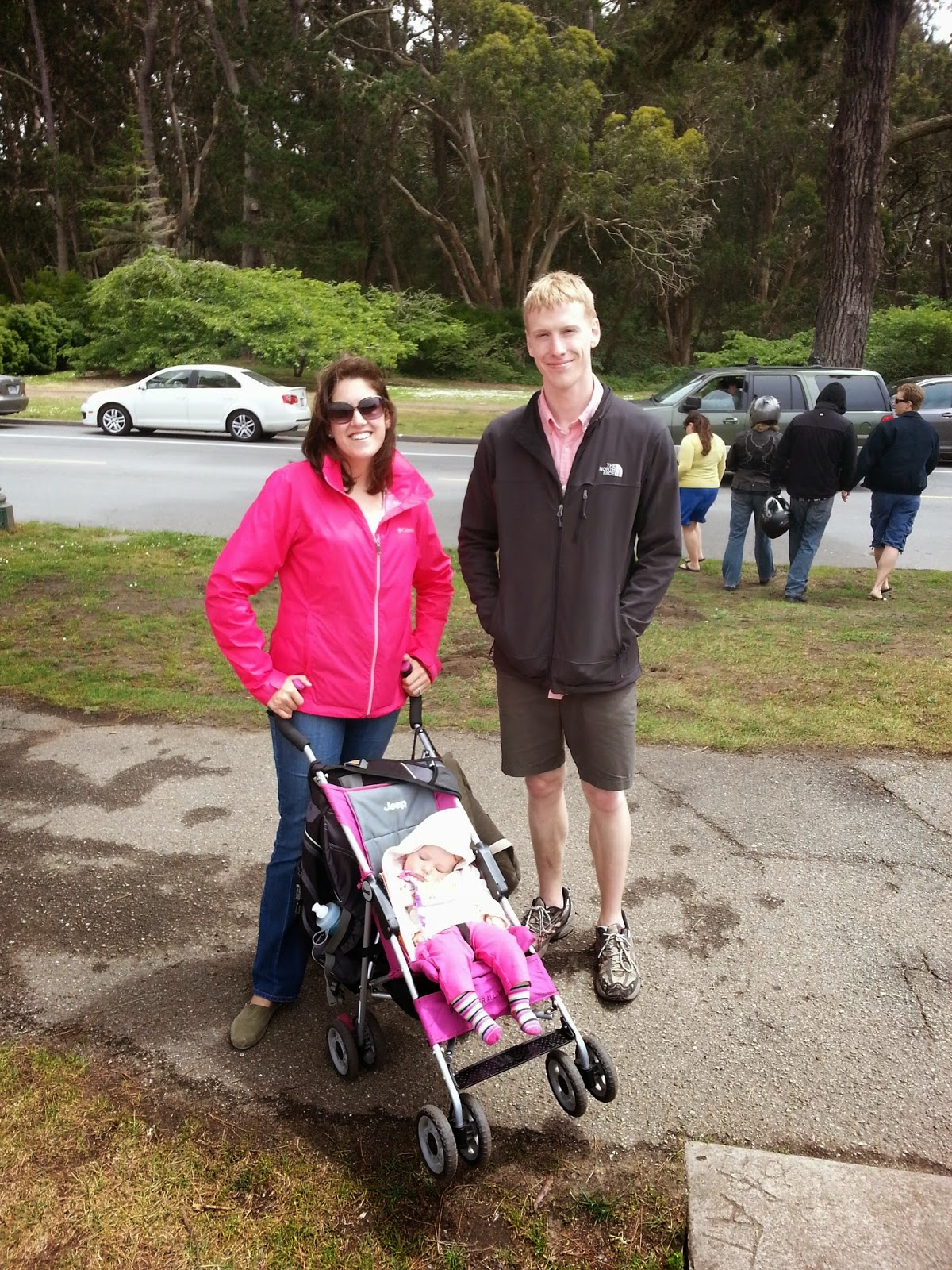 (The sun was finally starting to come out and we were warming up.  Poor Ian was in the middle of moving and didn't have access to anything other than shorts.  He claimed it wasn't that bad, but looking at him made me cold!) 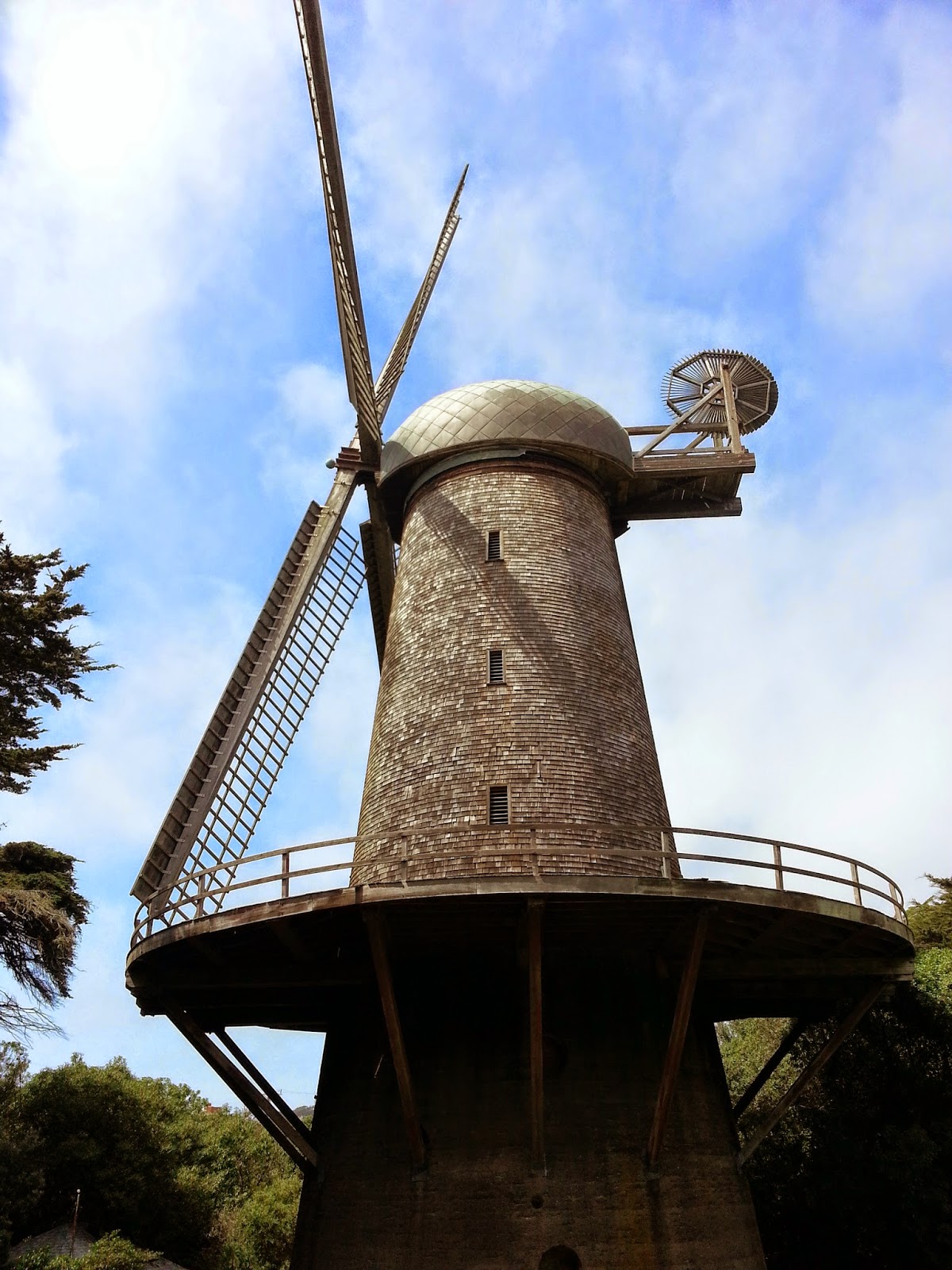 (Checking out a dutch windmill in the middle of San Francisco, no big deal.  Ha)

Halfway through the day, the sun came out and it finally warmed up.  After we finished up the Golden Gate Park, we walked to Lands End.  From there, we were able to see a good view of the Golden Gate Bridge and walk part of the coastal Trail.  We debated on walking all the way to the bridge (5ish miles), but it was late afternoon and we were getting hungry and tired.  Okay, Steve and I were getting tired and we were slowing Ian down, ha!  We ended up taking a bus back to the area where we had eaten lunch and found a pizza place for dinner.  The place just picked one kind of pizza each day and cranked it out.  We happened to get the last pizza of the day!  They closed as we were eating, so we took the pizza outside and ate. 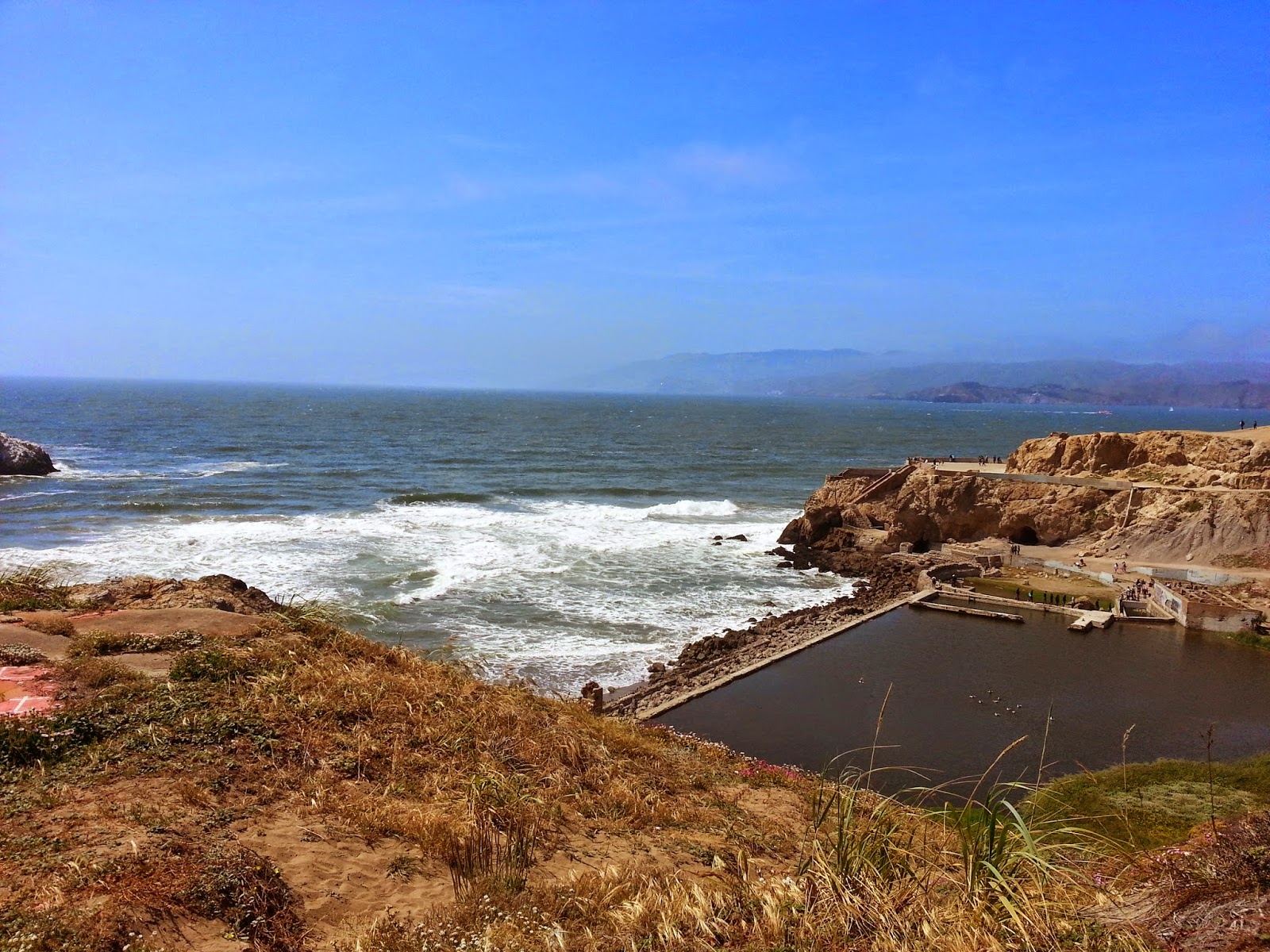 (This area used to have a huge bath house that was privately owned but opened to the public right before the turn of the century.  The Sutro Baths ended up being unprofitable and was rumored to have been set on fire for insurance profit.  Now you can only see the foundation of the building.) 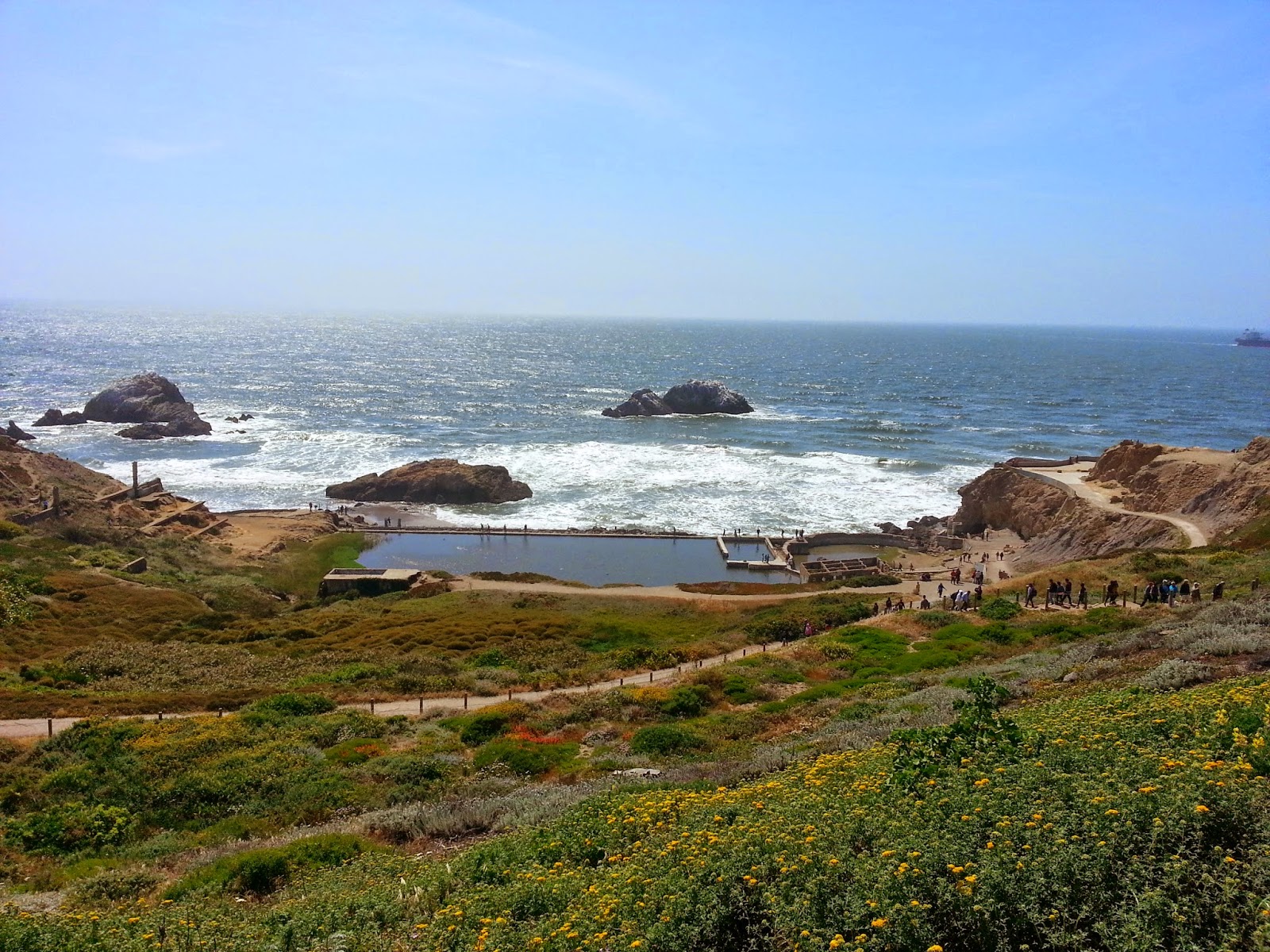 (Another view of the Sutro Baths at Lands End) 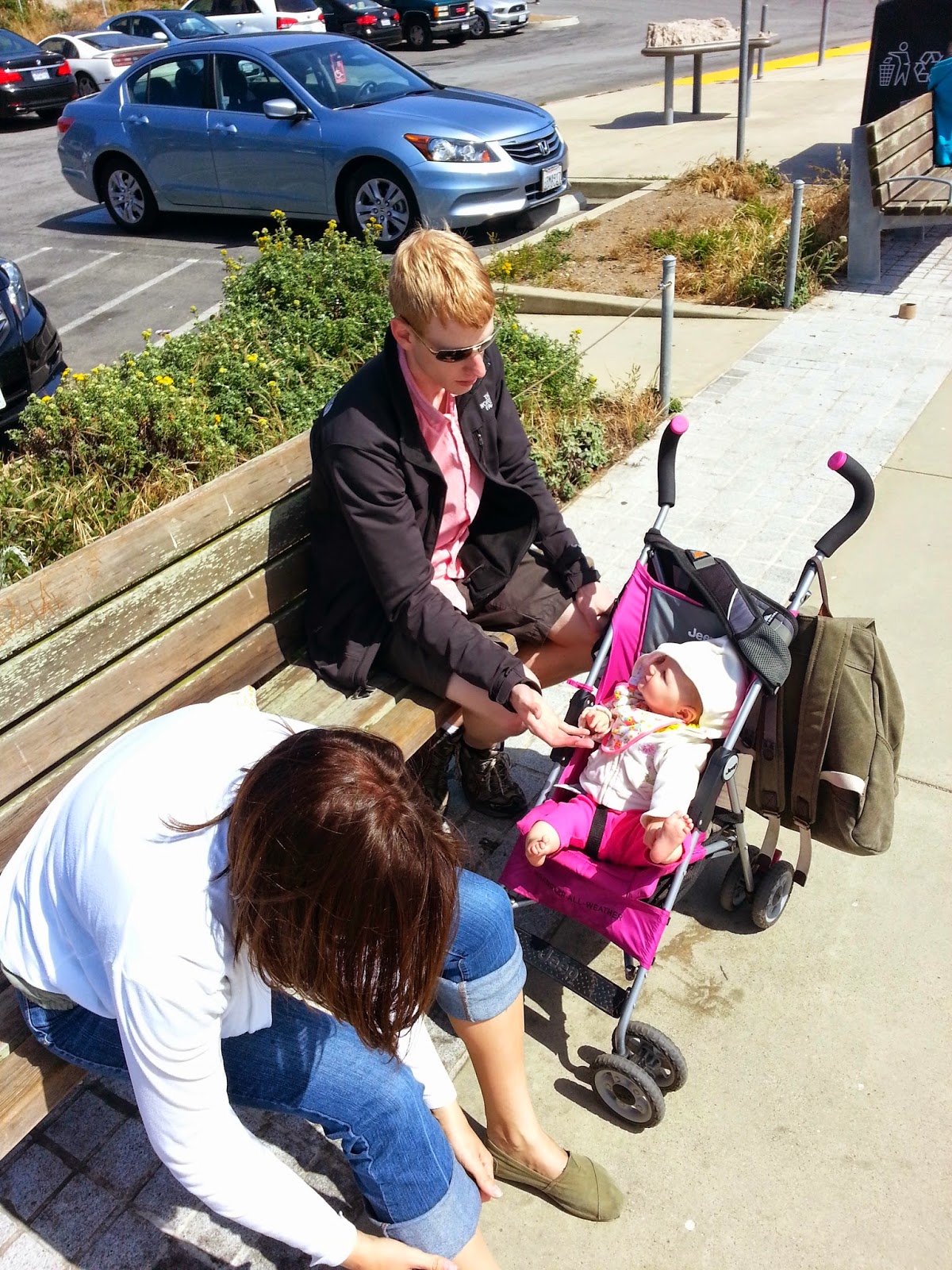 (We had to stop and take a sunscreen break.  Bean enjoyed bonding with Uncle Ian and Steve caught one of their moments in this picture.) 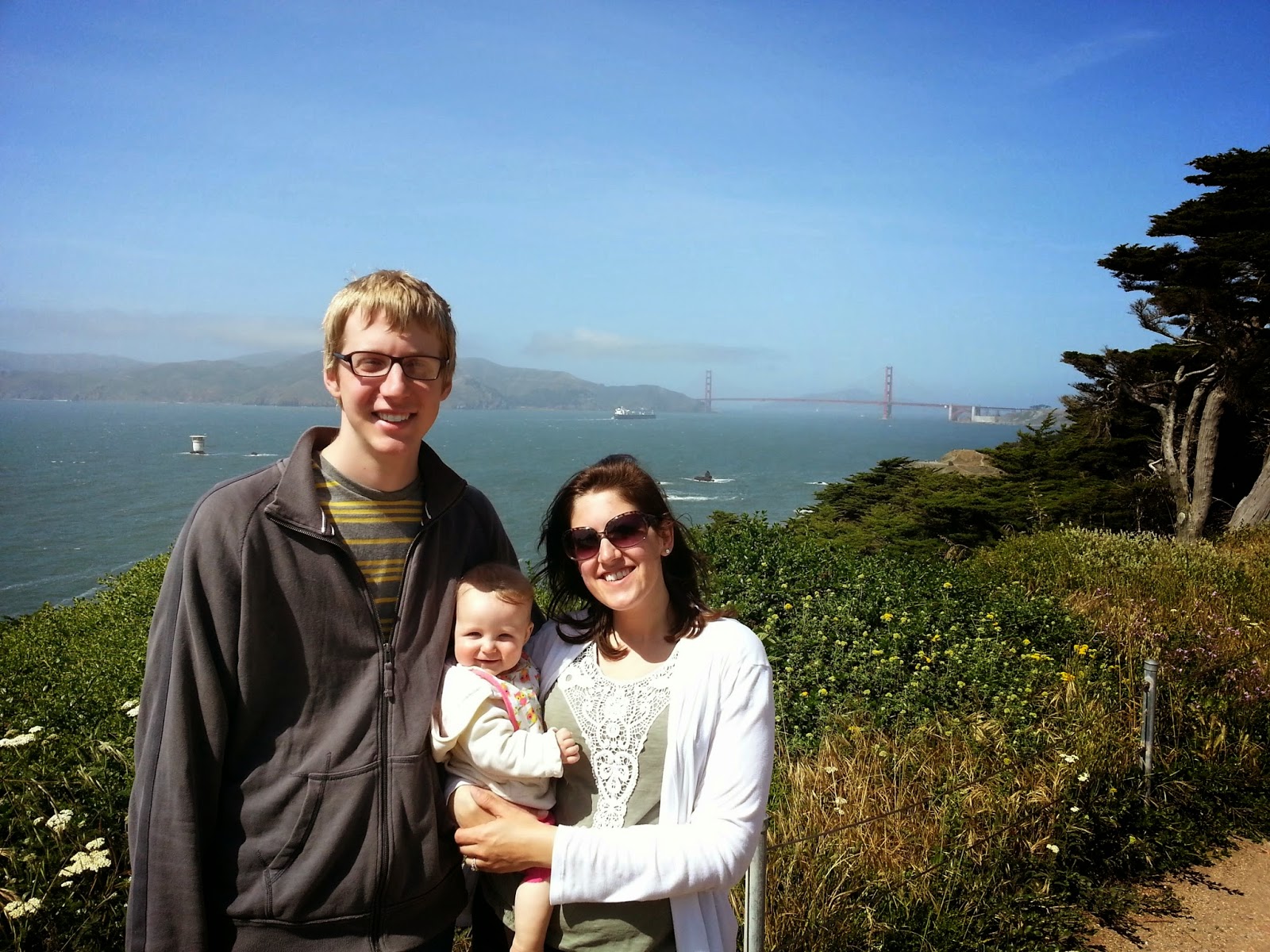 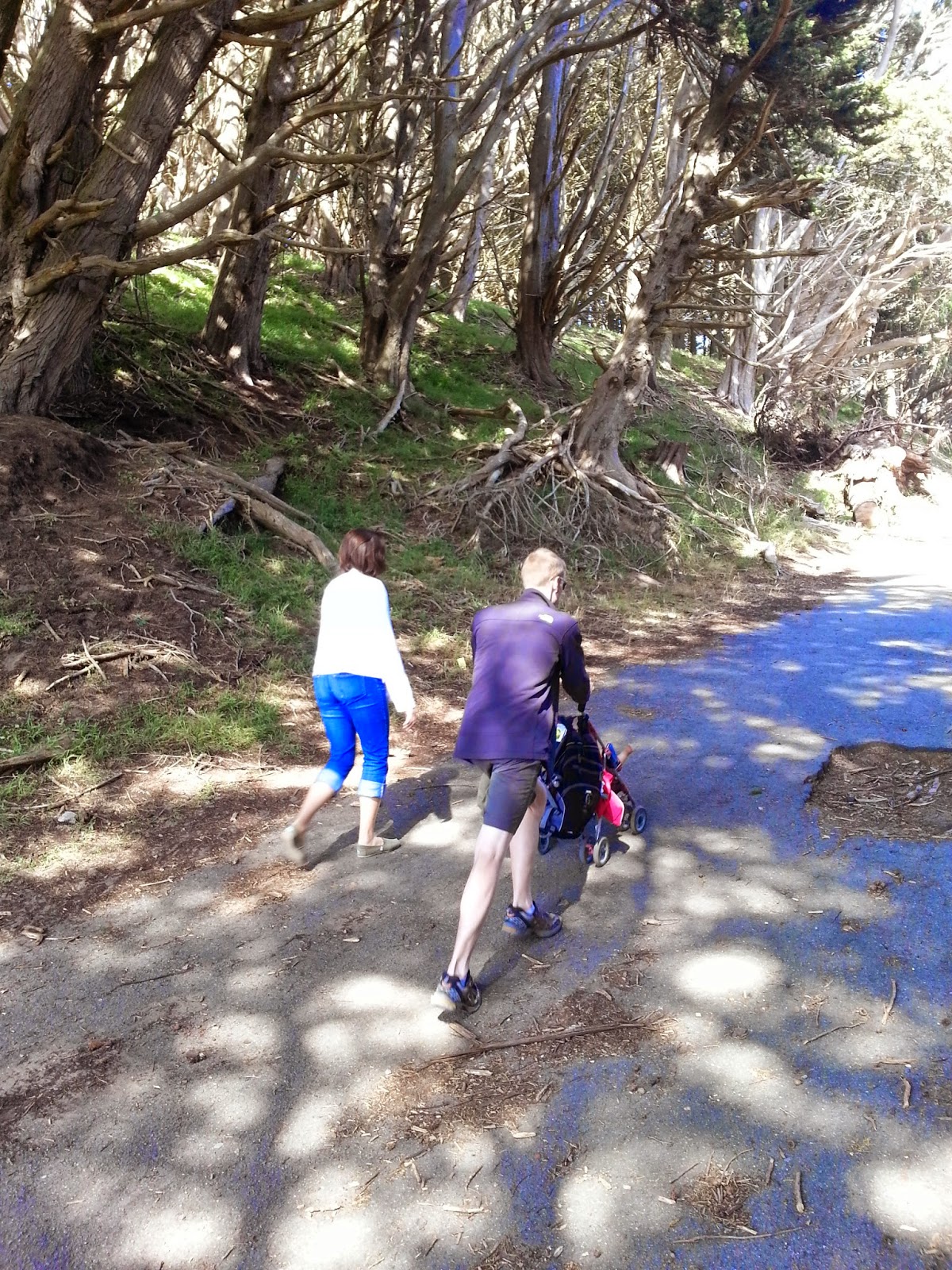 (Ian did most of the stroller pushing while walking the coastal trail.  At some points, he and Bean were a ways ahead of us slow pokes.) 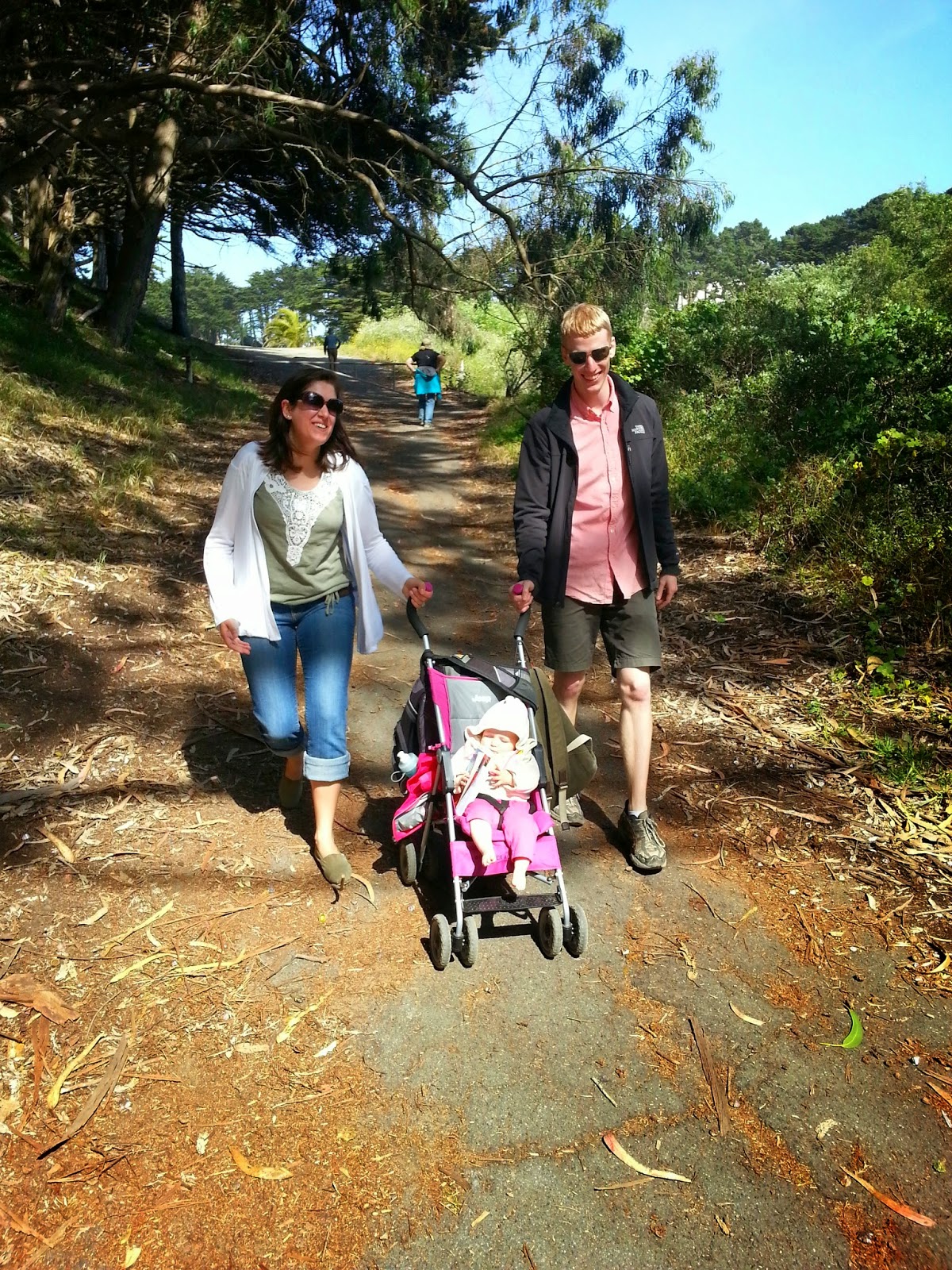 (It sometimes gets awkward walking behind the stroller because your feet will hit the under part of the stroller, so when going downhill, it's easier to have two people hold it and walk down.  Well, it should have been easier, but we weren't communicating well and the stroller kept veering off in one direction.  Ian kept yelling at me that it was my fault, but I plead the 5th.)

It worked out that we needed the same train as Ian to get back to our apartment.  We rode it to a BART station together where we said our goodbyes and he traveled out of the city.  We left the station and caught a bus to get back to our apartment -- our last bus of the trip! We got back to the apartment in time for Bean's bedtime routine and for me to start packing!  Bean really fought going to sleep and was pretty needy.  I finally signed her off to her daddy at 9:30, because I had to pack! We had to be ready for pickup at 4:30am! 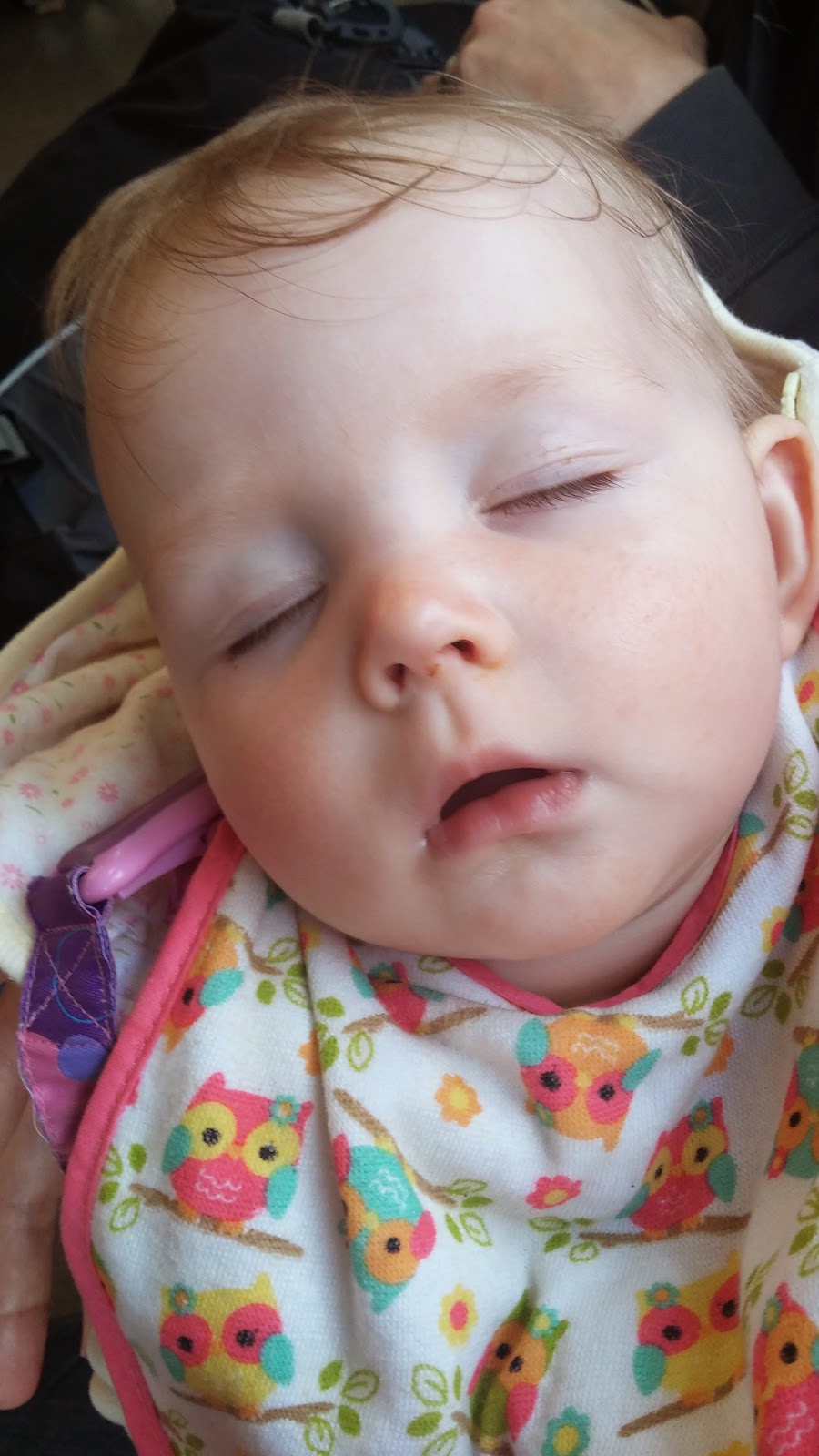 (And this is why Bean fought going to bed so much -- she completely zonked for the short bus ride home.  We did our hardest to entertain her and keep her awake, but when this girl is tired and on a moving vehicle, it's nearly impossible to keep her awake.  How can we be upset with this cute girl?!)
Posted by Unknown at 6:30 AM