On Thursday morning, we were supposed to wake up early and go out to eat for breakfast at a nearby restaurant.  However, we decided it was better to let Bean take a morning nap (okay, really she woke up early and I wasn't ready to start my day) and make it a lazy morning.

We had a designated time and location to meet up with a tour guide to go on a walking tour of the Victorian houses.  We weren't sure what to expect as far as how many people would be on the tour.  Our tour guide was from the area and has been doing these tours for 15 years.  He was very knowledgeable and had a fun sense of humor.  It ended up being around 12 or so people who were on the tour, which was a great size group.  We started by all taking a bus ride to the starting point - a girls' school turned hotel named after its architectural style - Queen Anne. 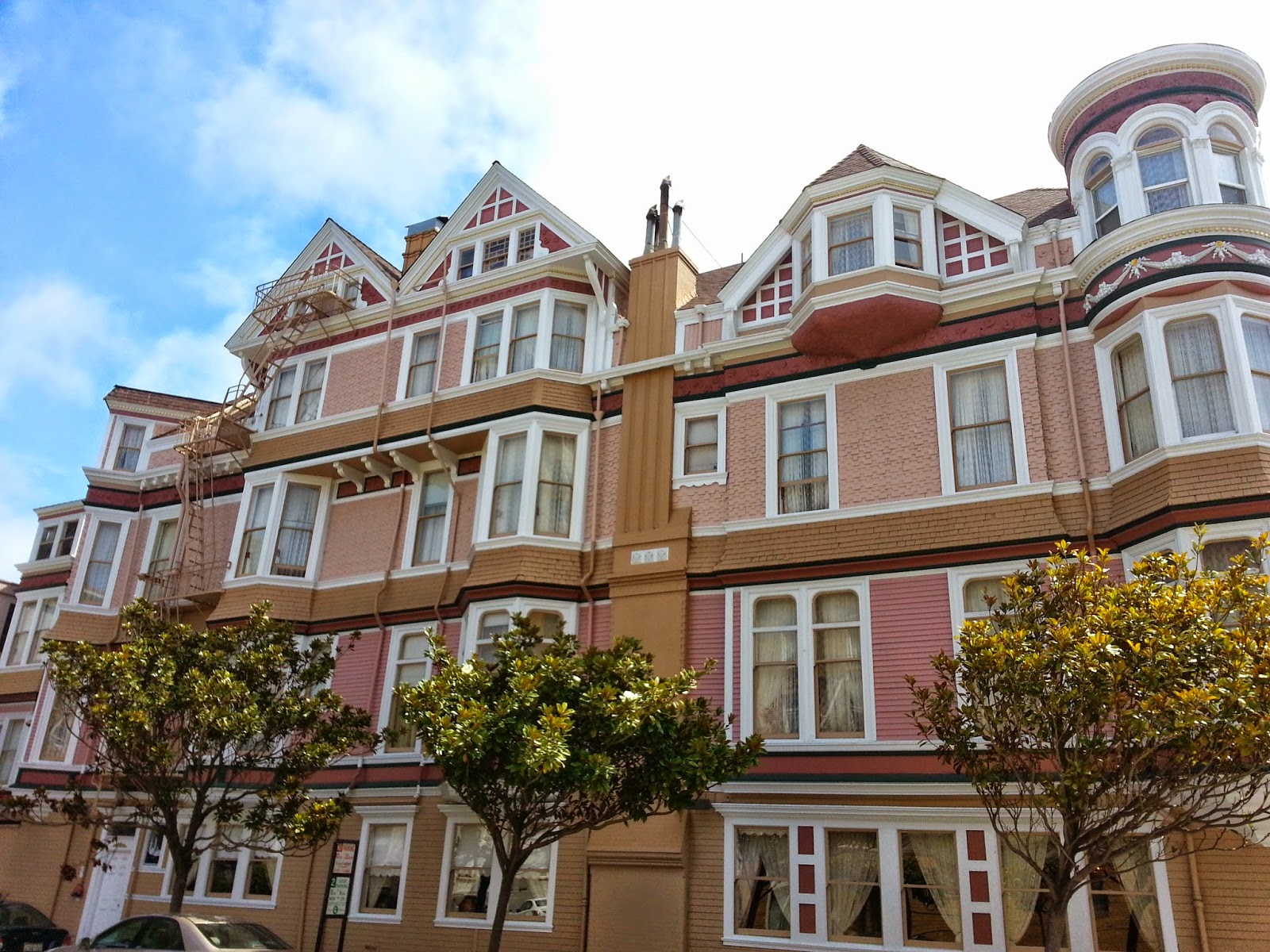 (Here is the Queen Anne Hotel.  You can tell it's in the Queen Anne style for several reasons: its over the top details - hard to see in the picture; the slanted peaks of the roof; and the turret on the right side.  There should be a "hat" on that turret, but it was probably removed due to damage.) 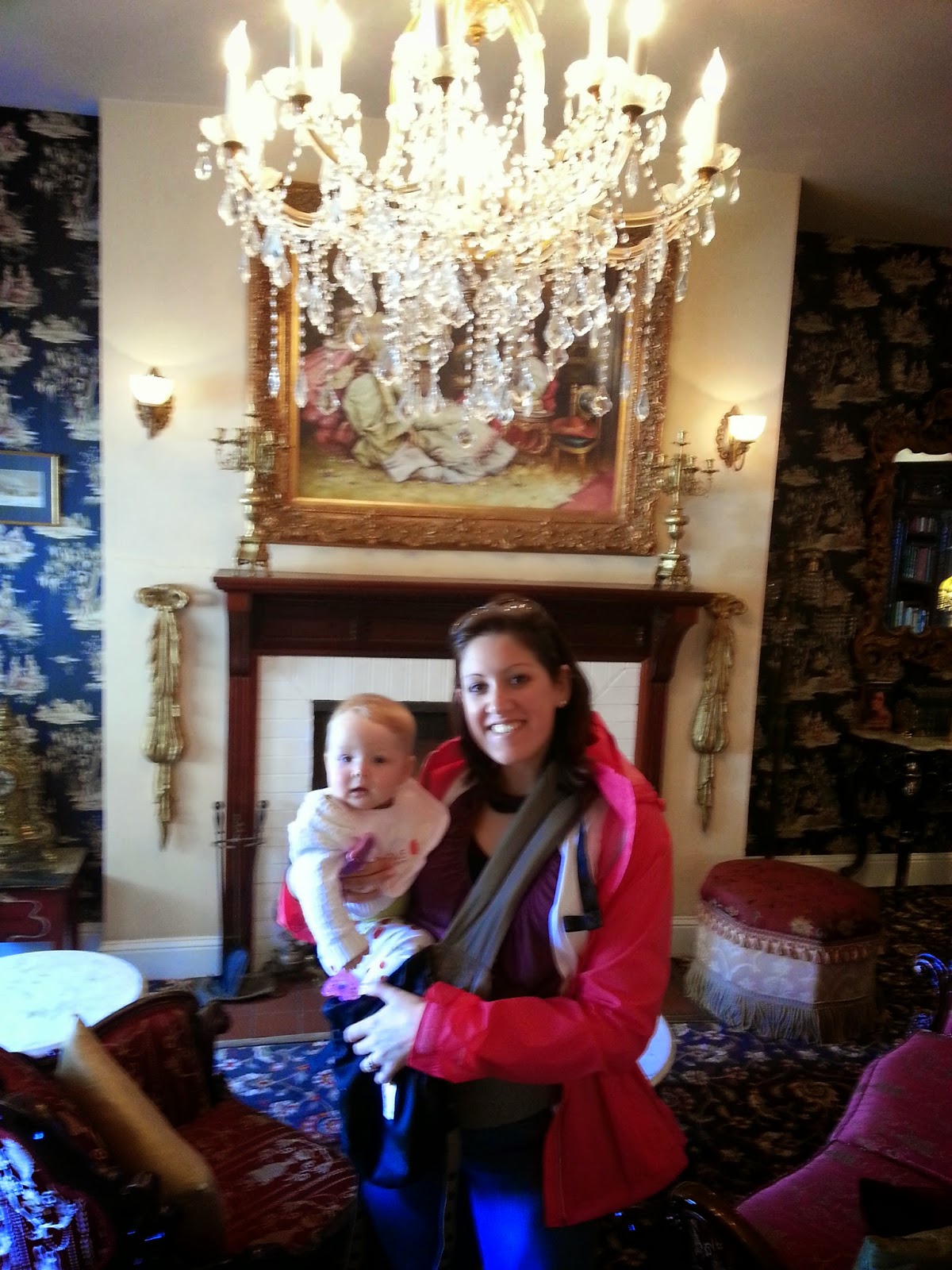 (We got to go inside the hotel and see its decor.  We were able to look on the first floor which was once a gymnasium, now turned lobby; as well as go upstairs and see one of the rooms in the hotel, which would have been the girls' dormitories.)

From there, we just walked around and saw the different style of Victorian homes - Queen Anne, Italian, and Eastlake Stick.  Bean did absolutely great and just hung out in the stroller as we walked all around.  Towards the end she was getting hungry and I was trying to figure out how I was going to feed her while we continued the walk.  However, it was nearing the end of the tour and I was able to hold her off with some little dried yogurt bites.  Once the tour ended, we hopped on a bus to head a restaurant to meet back up with Steve's family.  While we had been in San Francisco since the graduation, the rest of the crew had gone up to Yosemite to do some hiking.  It just happened to work out that we could meet back up with them for lunch and hanging out in the afternoon before their flights to head back home. 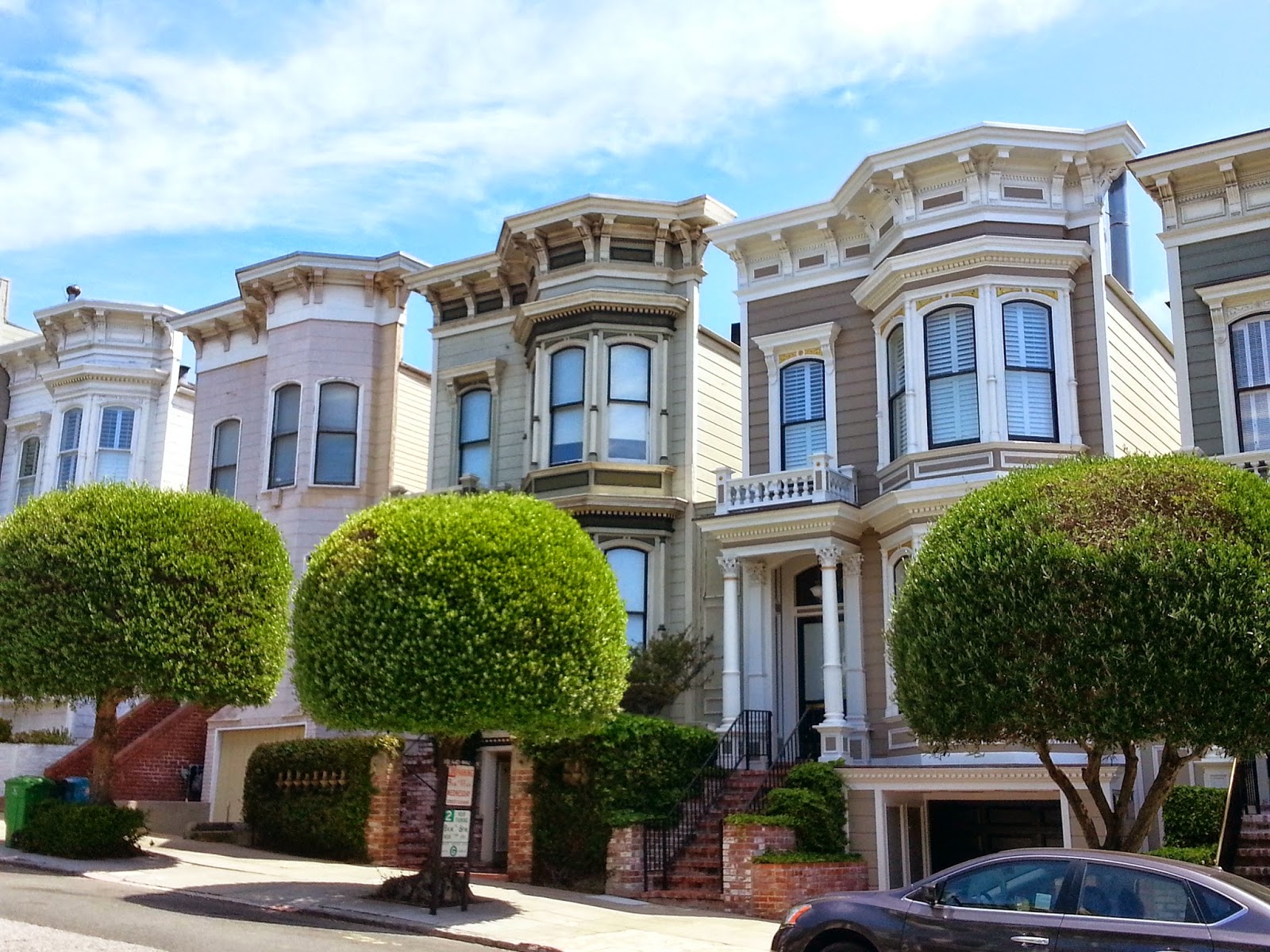 (Italian style architecture.  Notice all the faux fronts??  The crowns of the buildings are all fake fronts to make them appear much taller and more elegant.) 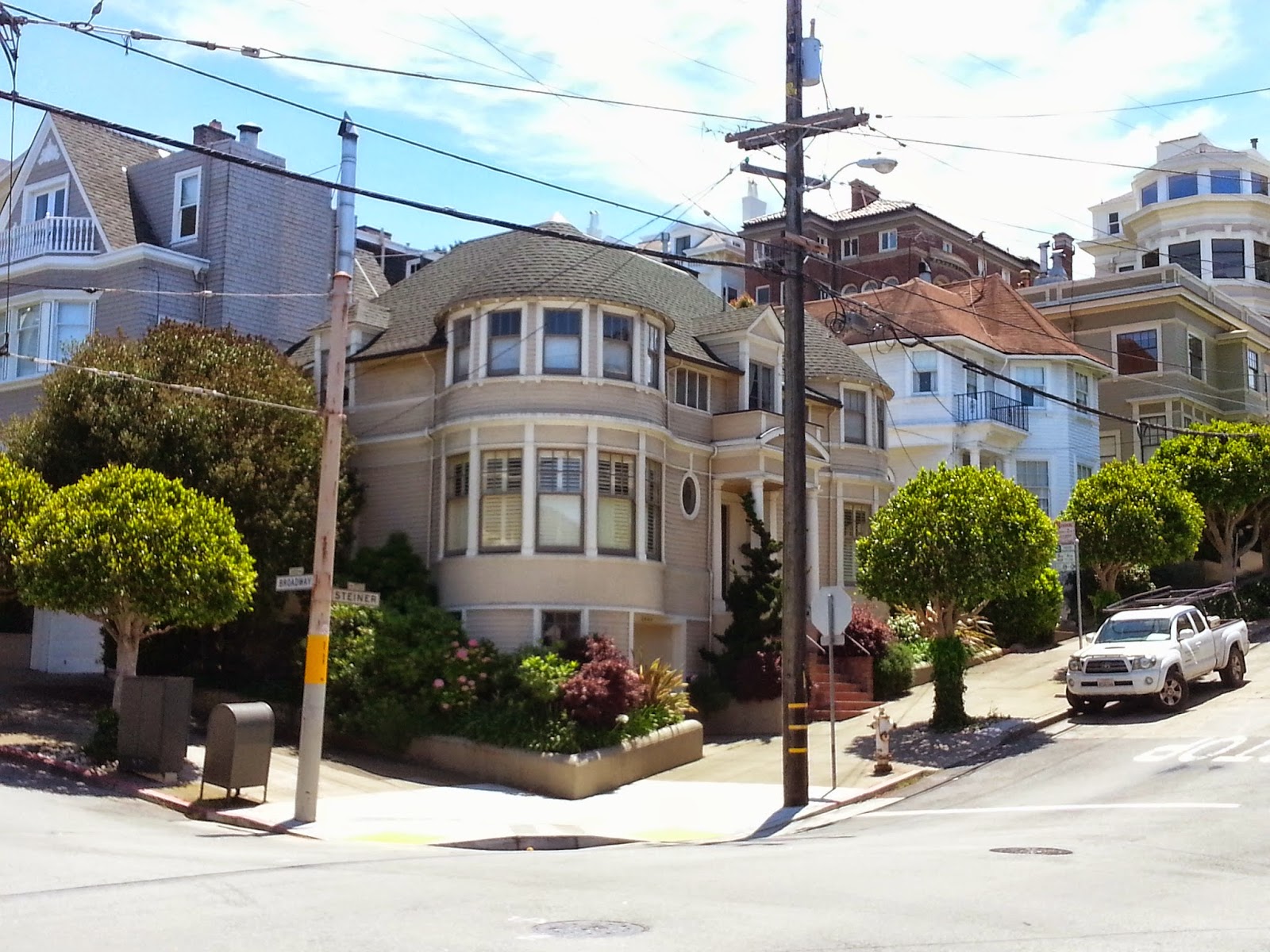 (As a bonus on the tour, we got to see some "celebrity" houses. This was the house from Mrs. Doubtfire!) 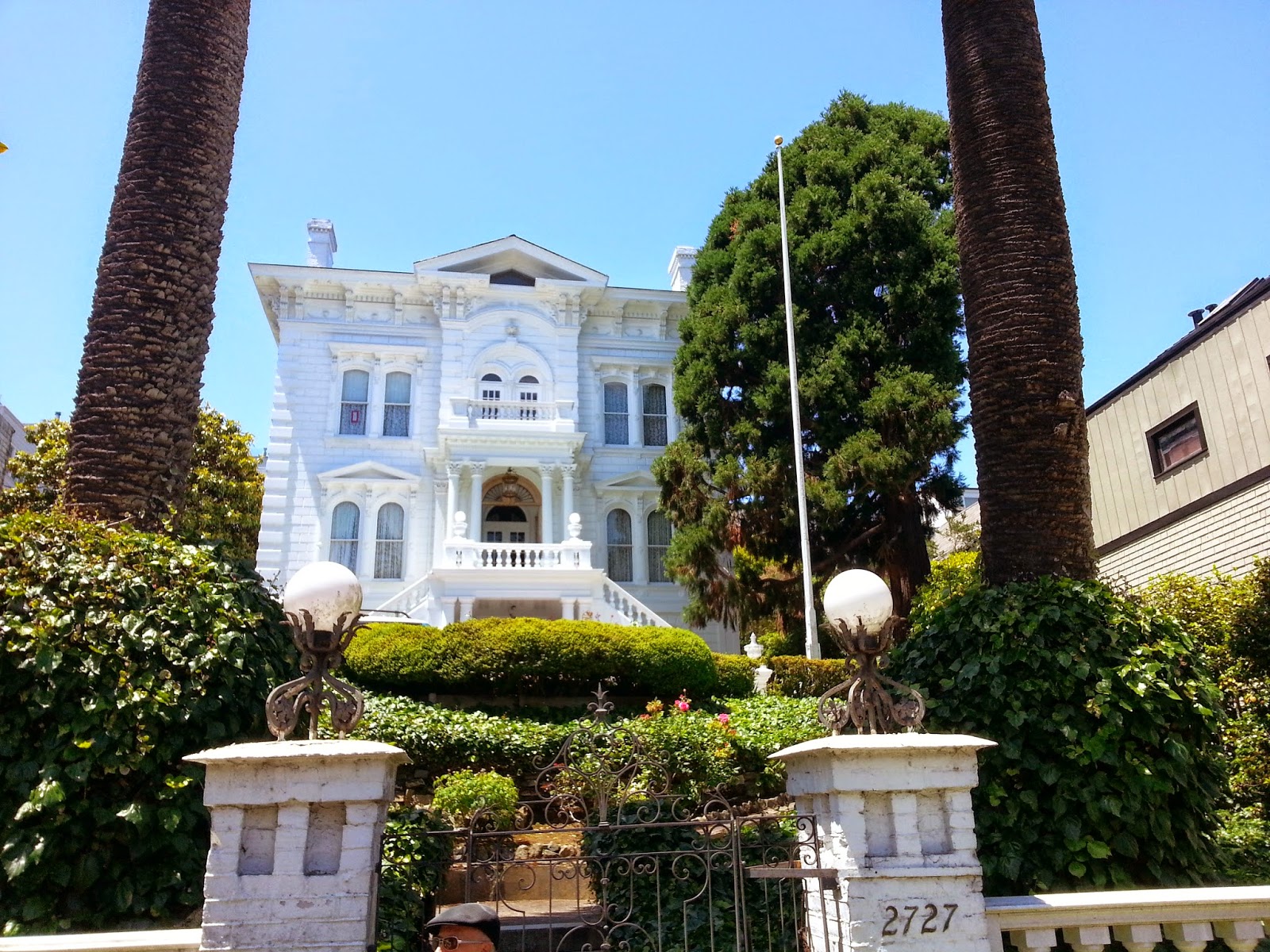 (This was the last house on the tour.  It is entirely made out of wood - even that light pole is wood! - and is one of the few surviving wood houses prior to the 1906 earthquake/fire. The two palm trees - you can only see the trunks in the picture - were transplanted from the 1915 World's Fair in San Francisco to this home's landscaping.  At the end of the fair, they were giving away all the plants for free.) 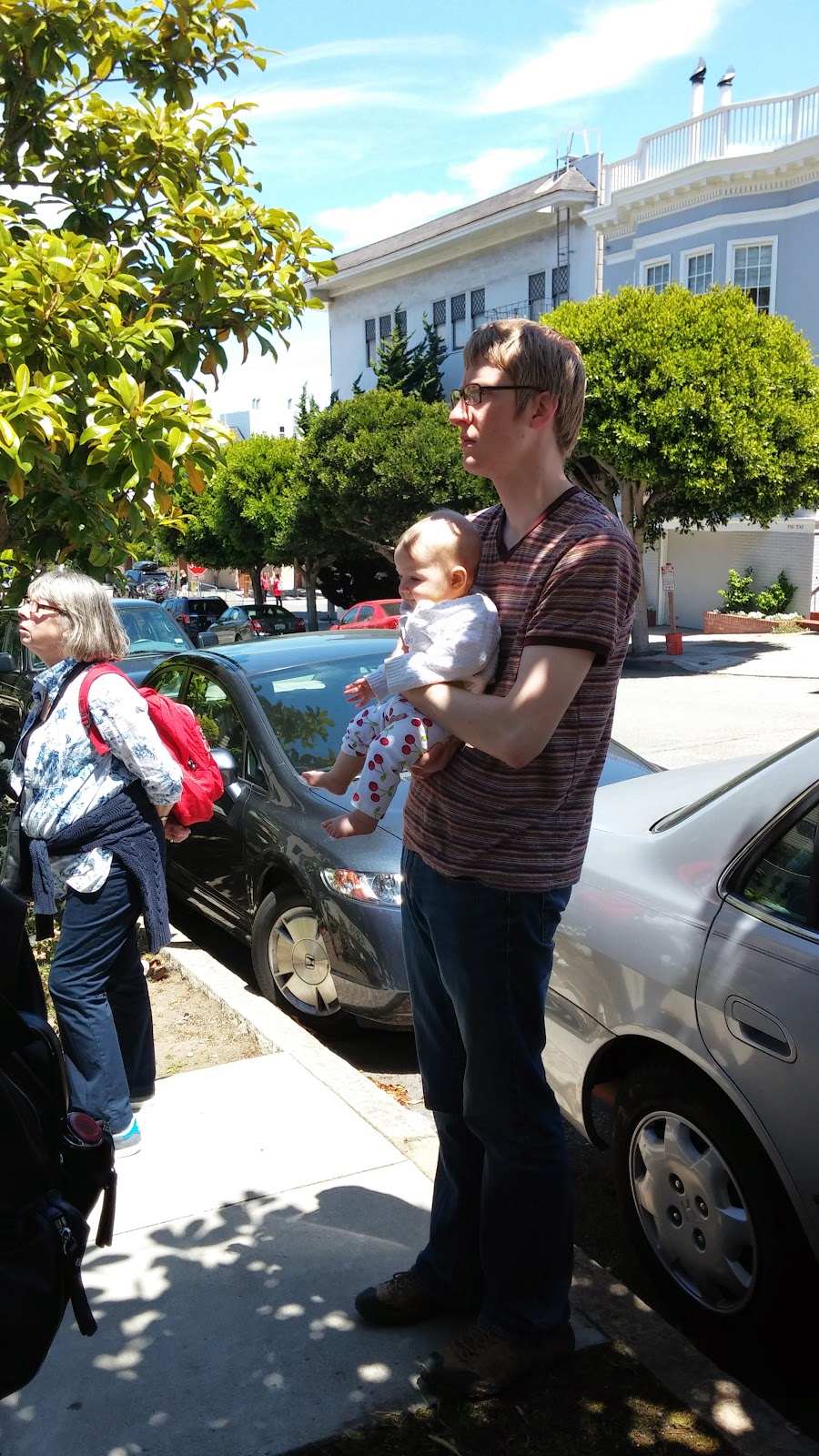 (Steve and Bean listening intently about the white wood house.  This was the last house mentioned on the tour, and this is when Bean was getting pretty hungry and fed up of the tour.  We resorted to tactics like holding her to distract her long enough to be in a situation to feed her.)

We hung out at the restaurant (some burger & shake place) for quite awhile, before deciding to walk towards a big public square.  It was nice to have the nice to be able to hang out with Steve's family again and have a little down time in our schedule!  After we said our goodbyes and they left, we switched Bean into the carrier and headed for a bus to get us to the Palace of Fine Arts.  We needed the 30 line and noticed there were two different "30" buses with different "Loop" names.  We weren't sure about that, but got on the first one.

We were supposed to ride it almost all the way to our destination, but about 7 stops earlier, the bus driver declared it was the end of the line and we had to get off.  We were baffled that the line had stopped (we were relying on gps/google telling us which bus to get on about the stops, and it kept telling us to stay on the bus).  The bus stop we were dropped off at didn't have 30 even listed on it, so we knew we couldn't pick up another 30 bus there and there were a bunch of people standing there getting frustrated about waiting for buses.  We decided to walk down to the next stop and figure out what to do from there.  I was starting to panic and shut down (when I get stressed or upset, I pretty much go into my shell and can't function, sorry Steve). I remember seeing something at the previous station about certain lines running at certain times.  I was beginning to imagine being stranded at the bus stop with no buses returning for the evening, Steve getting a taxi and having to go back to the apartment to get the car seat and come back for Bean and I, or us simply just walking the hour+ back to the apartment.  Just after I had a small meltdown and stating 'I want to go home!', a mysterious 30 bus popped up (it was the other loop that we should have taken from the get-go) and we hopped on it!  It got us where we needed and we finally got to the Palace of Fine Arts! 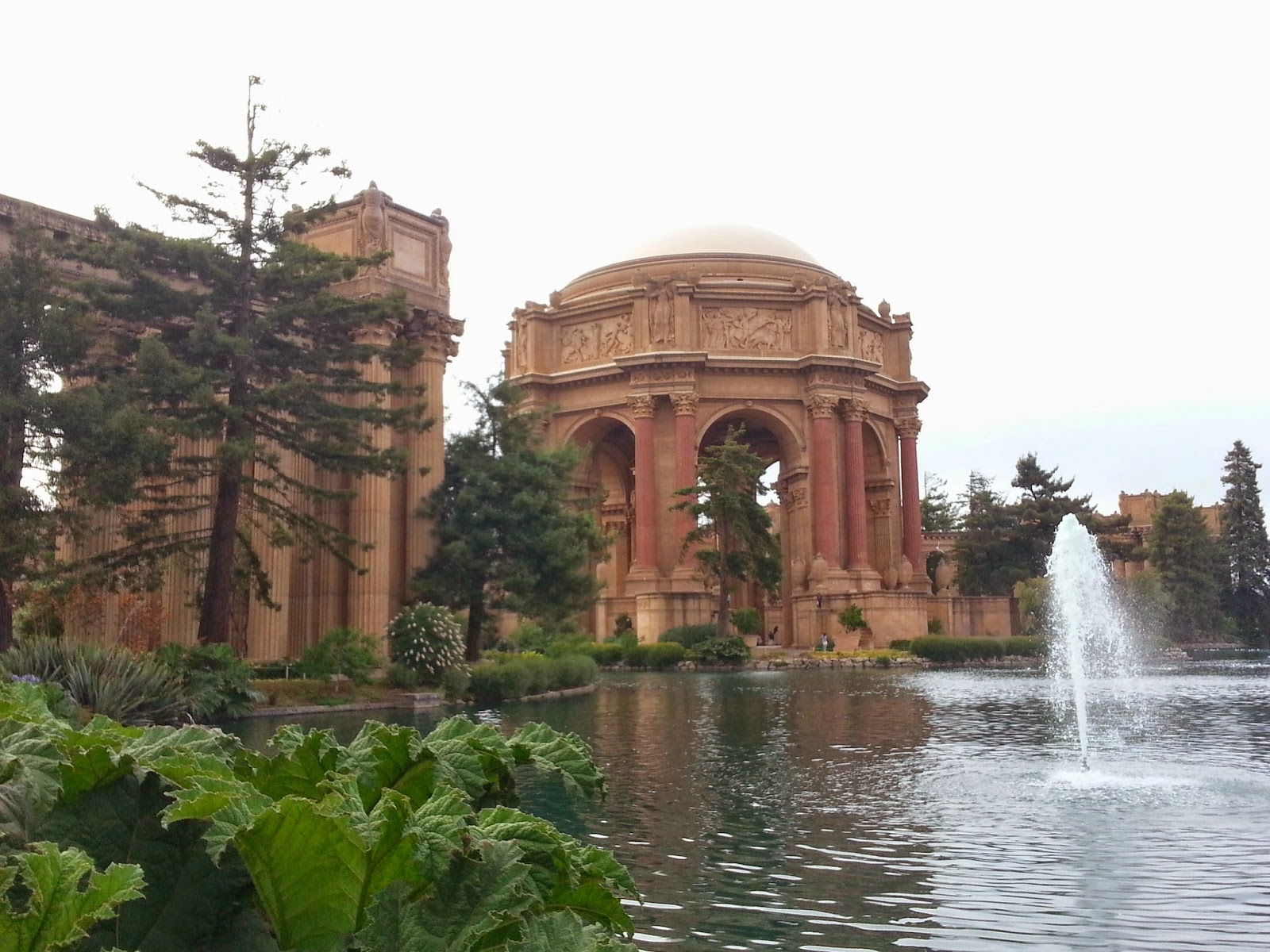 (The Palace of Fine Arts was also built for the 1915 world's fair to be an exhibition and house works of art.  This is the only structure that remains in its original location from that world's fair.) 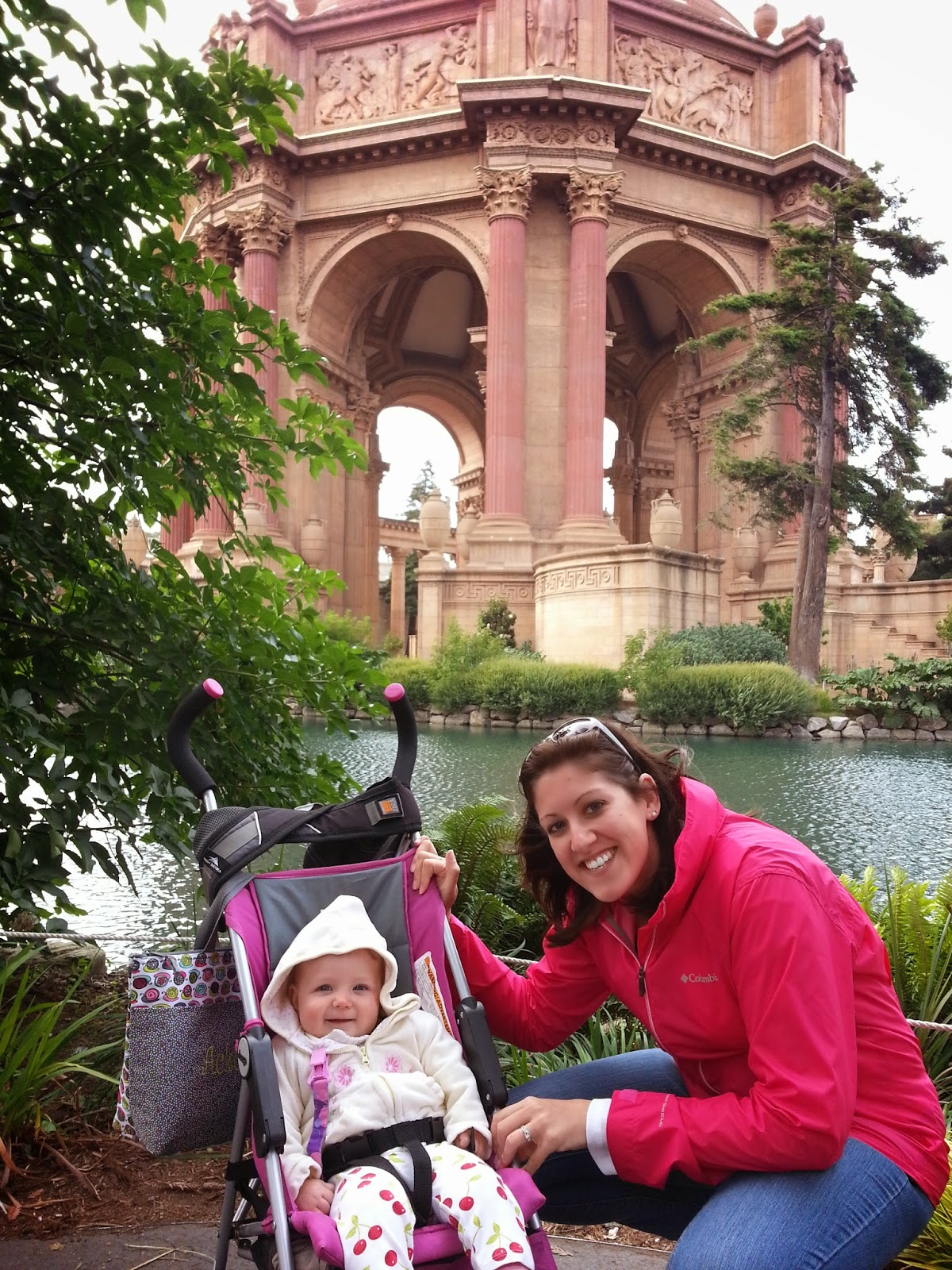 (We were thrilled to finally reach our destination and to still be alive after the whole bus confusion.  We are only slightly cold by this point.)

By this time, it was getting close to dinner time, it was getting pretty cold, we were tired, and I needed to go to the bathroom. All of this was recipe for another meltdown.  I did my best to keep myself pulled together as we walked through the Palace of Fine Arts and then to some supposed "boardwalk" and somewhere to get pizza for dinner.  I had it in my head it was going to be something like the Jersey boardwalk and that pizza would be at that location, when in fact it was just a sandy trail along some water and dinner was going to be another bus ride.  The wind was coming off the water, and I was getting hungry and colder, and I knew Bean had to be pretty cold.  I finally cracked and had a real meltdown right there in the middle of San Francisco.  I would like to at least point out the fact that this meltdown happened over halfway into our trip.  Usually, I have a freakout at least on day one.  Steve quickly realized I had reached my limit for the day and switched gears to get us back to the apartment. 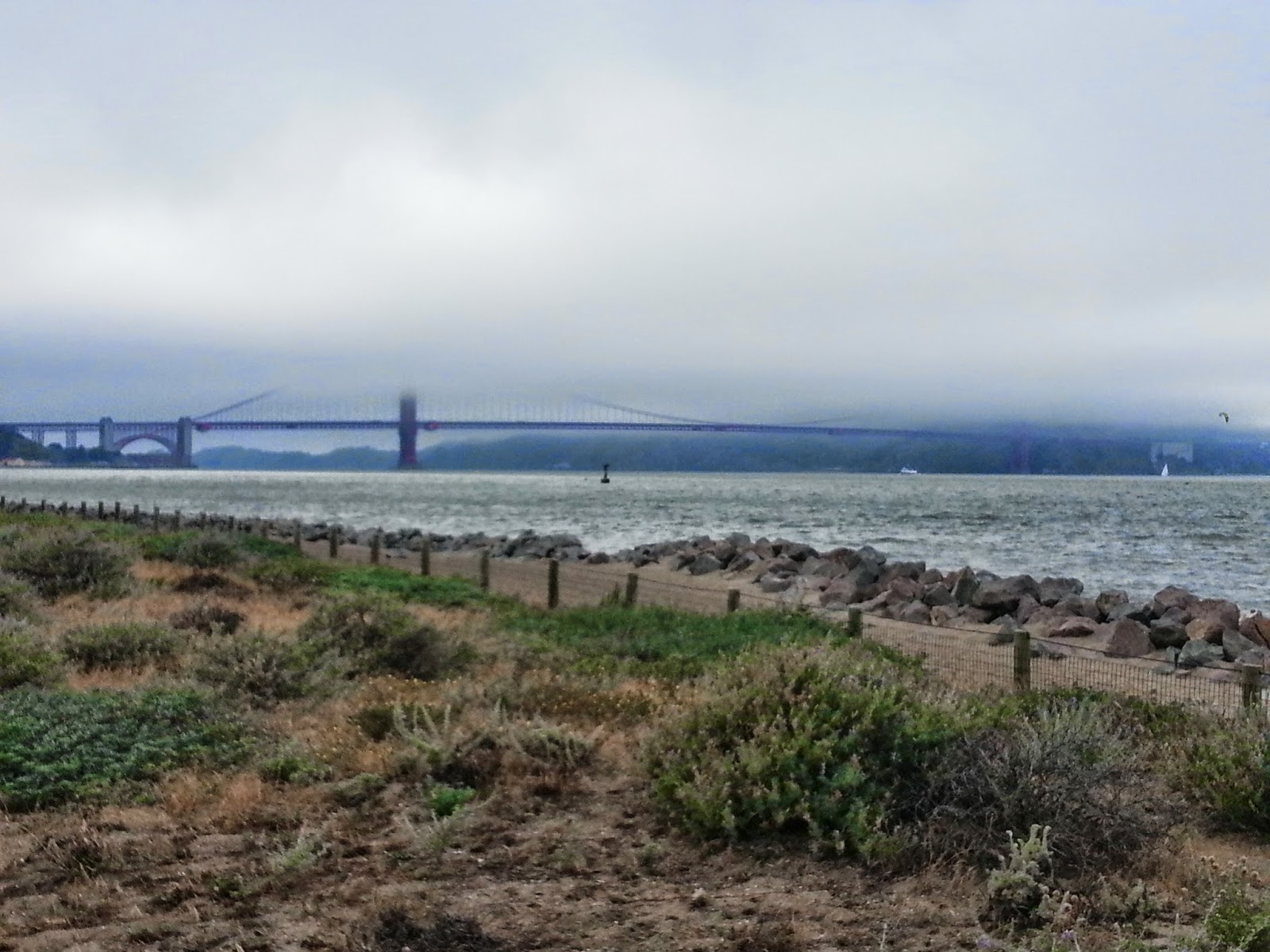 (This was the "boardwalk" that we were going to spend some time on.  It was way too cold by the time the wind hit you from off the water.  Notice how there is No One else out!? I think that's supposed to be the Golden Gate Bridge in the distance, but you wouldn't know that from the fog.  Sheesh!) 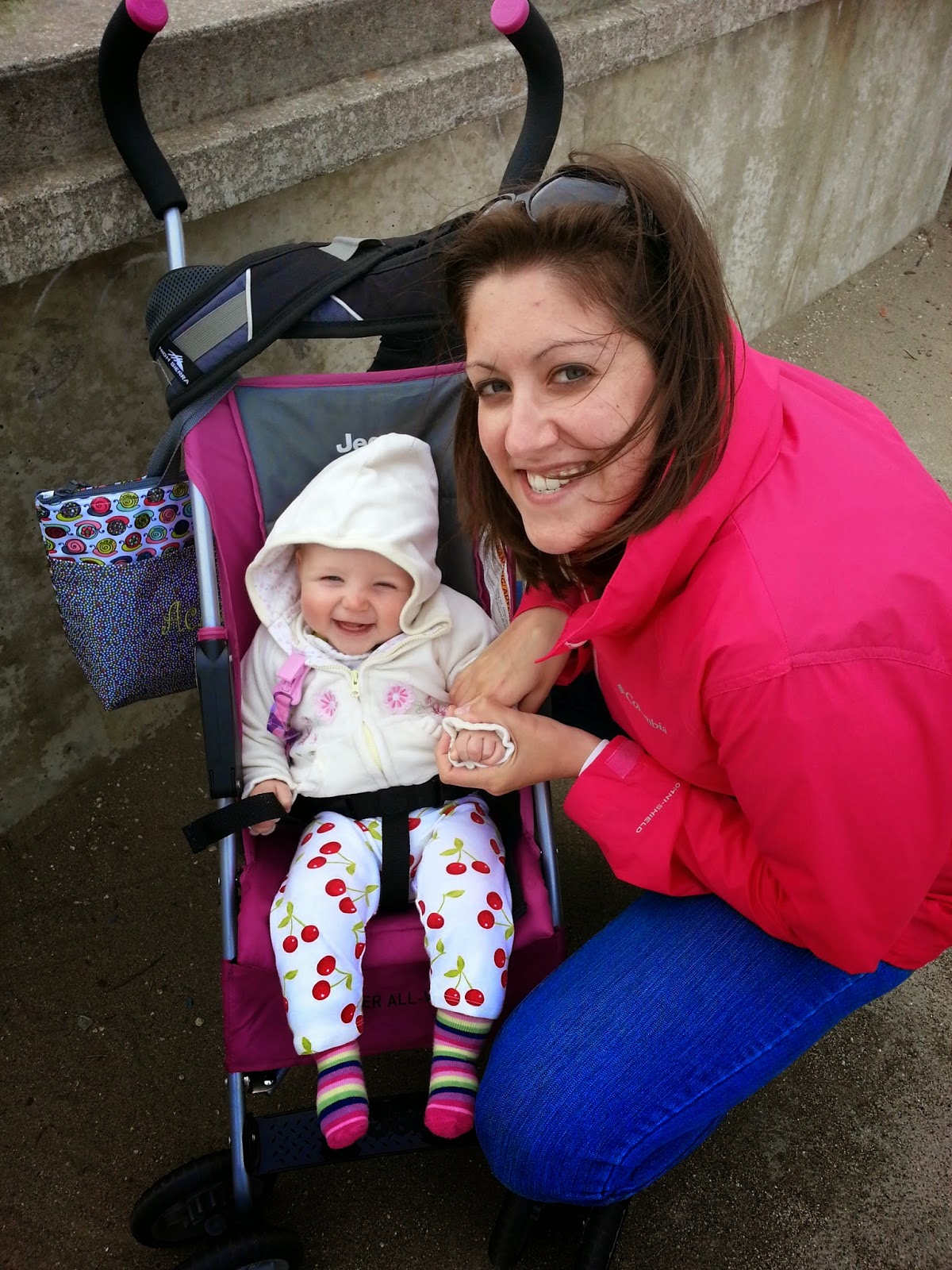 (Bean and I huddled behind a little cement ledge to try to block the wind.  This photo was taken minutes before my meltdown.  I think I got myself composed just enough for this picture, then we went out in the open wind and I lost it.  Steve stopped by a building to block the wind and to switch gears from going to find dinner to just getting back to the apartment. Have a mentioned how amazing Steve is for dealing with my crazies?)

We found a bus stop that would take us to another bus stop that would take us to the bus we need to get back.  When we went to step on the first bus, the driver almost didn't let us on.  He thought we were lost and didn't understand he only had 2 more stops on the line.  We needed his last stop and once that was clear, things went smoothly from then on.  We hadn't had any dinner, but Steve's plan was to get us home then decide from there what to do.  We got back to our little neighborhood and was walking up the hill to the apartment, when we discovered a little pizza place on the corner.  We got a few slices, took them back to our apartment, and had a very enjoyable dinner at home!
Posted by Unknown at 7:30 AM