A couple Saturday's ago, we loaded up the car with all our luggage and drove up to Detroit to catch our flight to San Francisco.  This trip marked a lot of firsts for Bean, including the one I was worried about the most -- her first plane ride!

Steve has really bad ears and is prone to infections from flying.  He found a solution to his flying woes - earplanes (you can buy them at pharmacies, but basically it's an earplug that is designed to help keep your ear pressure equal throughout takeoff and landing).  But Bean is too young for them, so I was a little stressed out.  I knew that if baby drinks during takeoff and landing, it'll help keep their ears popping properly.  So that added to the stress - making the times work for her to eat when I needed her to.

We were able to successfully get her to eat during takeoff.  She did absolutely great and was more interested in the small space and touching everything (she just sat on our laps the whole 4.5 hour flight).  She was overtired and got a little cranky and was fighting going to sleep, but she finally gave up her plight and gave us an hour reprieve. When she was awake, she was touching everything - magazines in pouch, window shade, wall.  You name it.  But at least she was quiet!  She never really cried out and we got tons of comments about how cute and well behaved she was - sweet! 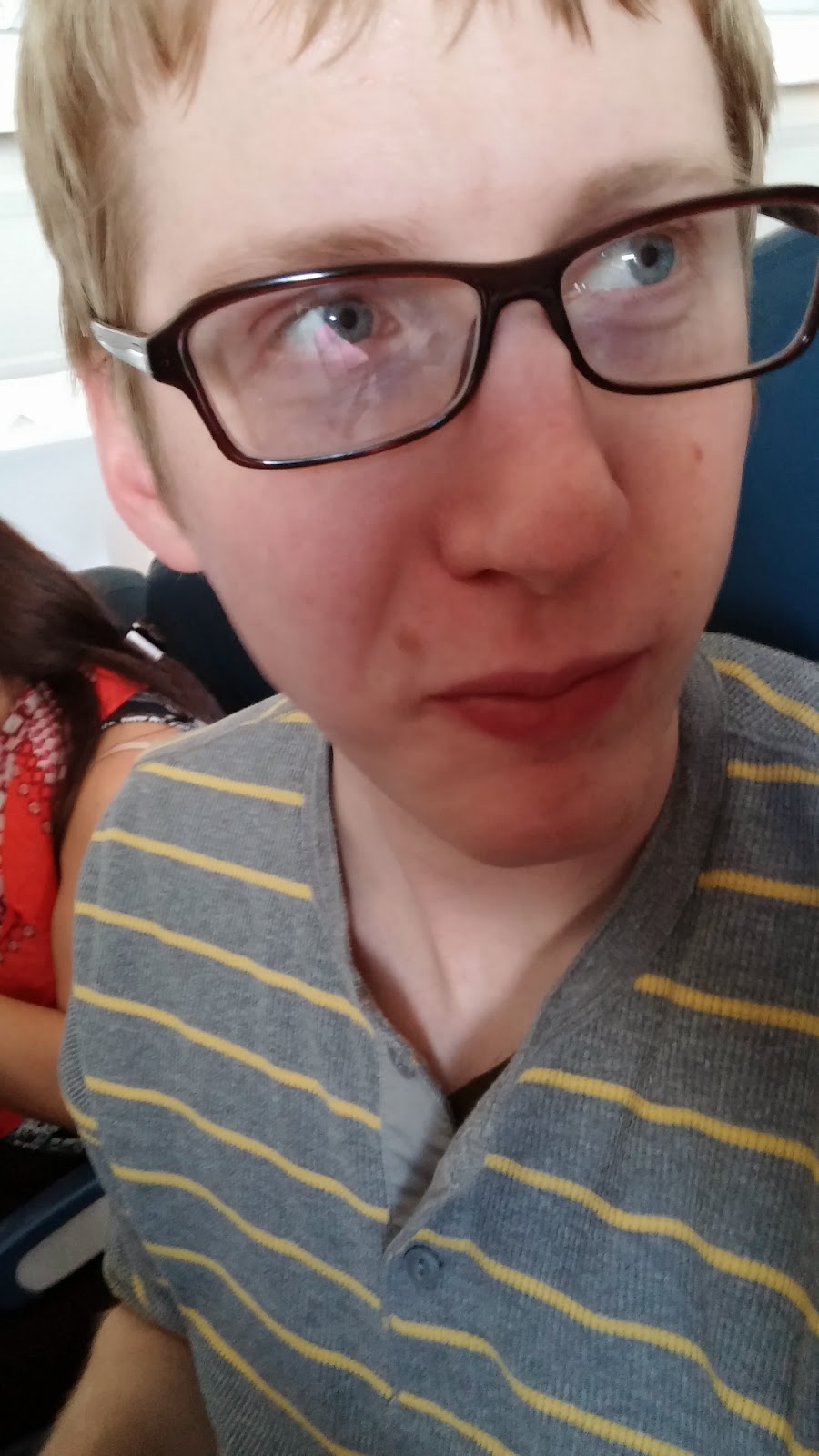 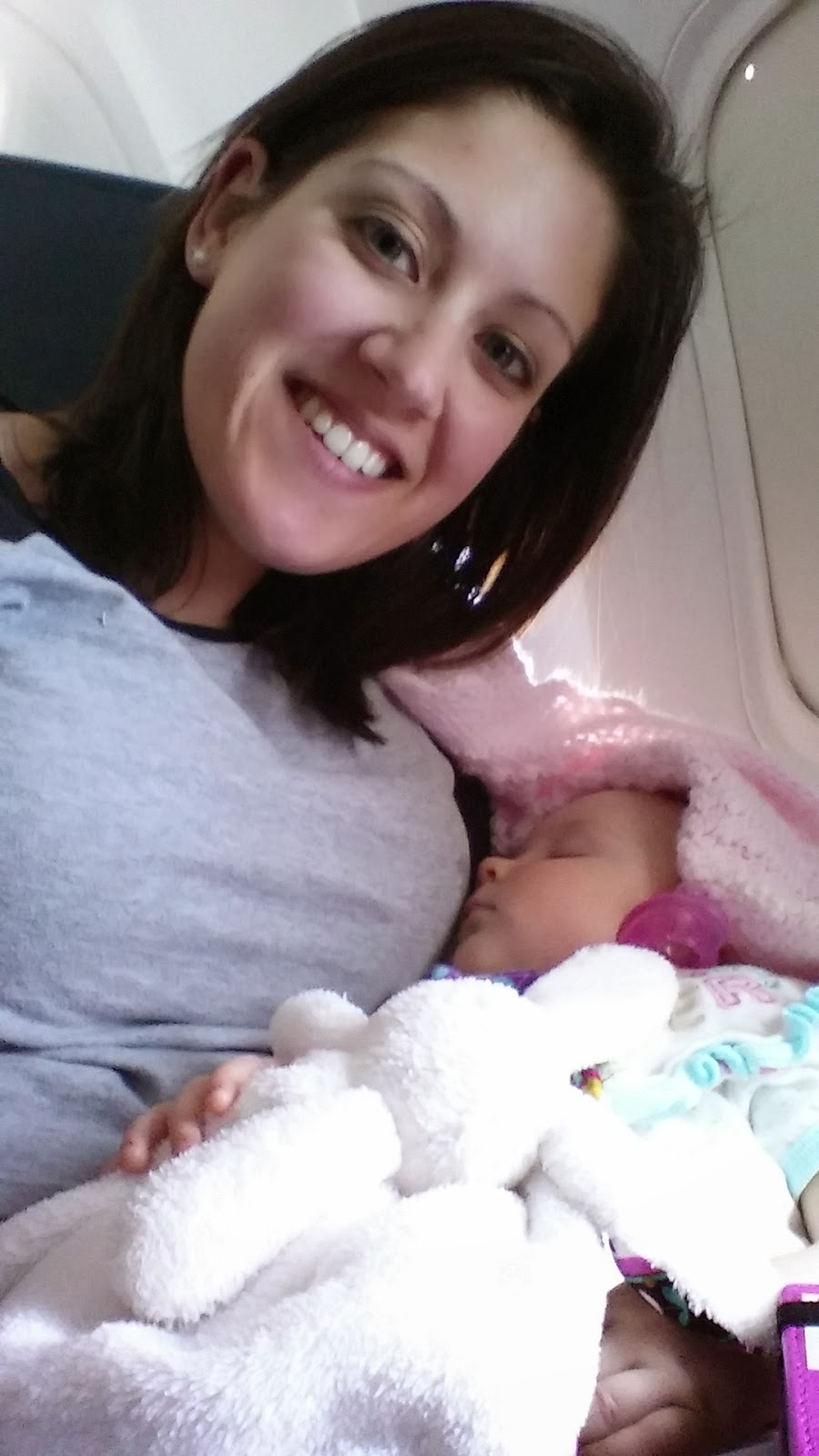 (Yay!  She's finally asleep.  I knew this wouldn't last long as she likes to roll around and stretch out while she sleeps.  Sorry little girl.)

We met Steve's dad at the airport, got our luggage and went to get the rental car.  After confusion on which car was ours, we figured it out and were headed out of San Francisco in into Oakland for the weekend.  We met up with the rest of the family (Steve's mom, sister, brother-in-law, brother, and grandparents) at the hotel and set the plan.  We put our stuff up in our room (which there was a mess up in the reservation and luckily there was still a room available), changed, and headed in search of dinner.  After searching a good 10-15 min for a parking spot, we got the cars parked and got into P.F. Changs for dinner - yum (even though I got the wrong meal, and earlier that day I got the wrong drink on the plane.  Maybe Bean is too cute and distracting people?).

We lost three hours with the time change, so even though it was going on 10 by the time we were in our room and getting into bed, it actually felt like 1am.  Poor Bean was all screwed up and hadn't slept much during the day.  I had hoped for her to sleep great that night, but instead, she was up mulltiple times.  We had a king size bed at the hotel and just sandwiched her in between us.  It was convenient for me to be able to lay next to her and take care of her when she was awake, but neither of us (as in Bean & I, Steve slept "fine" on the other side of the bed) slept the best next to each other.

We had to be up and ready early the next day to make it to the big event -- Ian's (Steve's brother) graduation at Berkeley!  There was a little fiasco in parking and meeting up with the group and getting Nanny & Poppy up the hill to the ceremony.  The family ended up split up - half of us up in the bleachers, the others in folding chairs down near the graduates (handicap seating).  They were able to see Ian up closer, as he sat just a few rows in front of them.  The speaking portion of the ceremony went quick, but the calling of all the graduates took awhile.  Bean slept through that part and didn't even wake up when her daddy yelled out "Yeah Ian!!!".  Ha 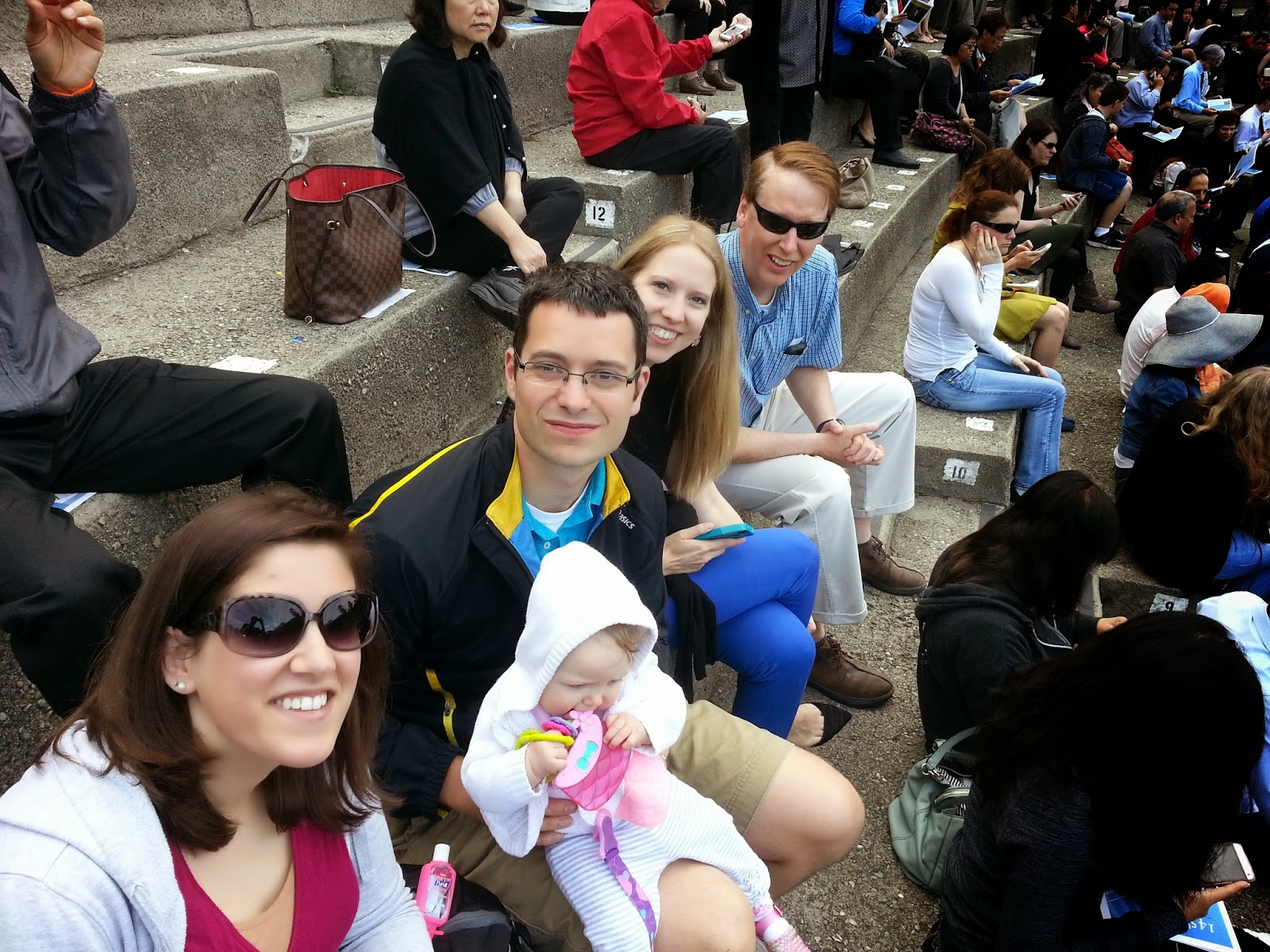 (Sitting up in the bleachers waiting on the shin-dig to start!  It was cooler in the morning until the sun came out. Then it got a little warm, especially holding her while she slept.  But at least she slept??) 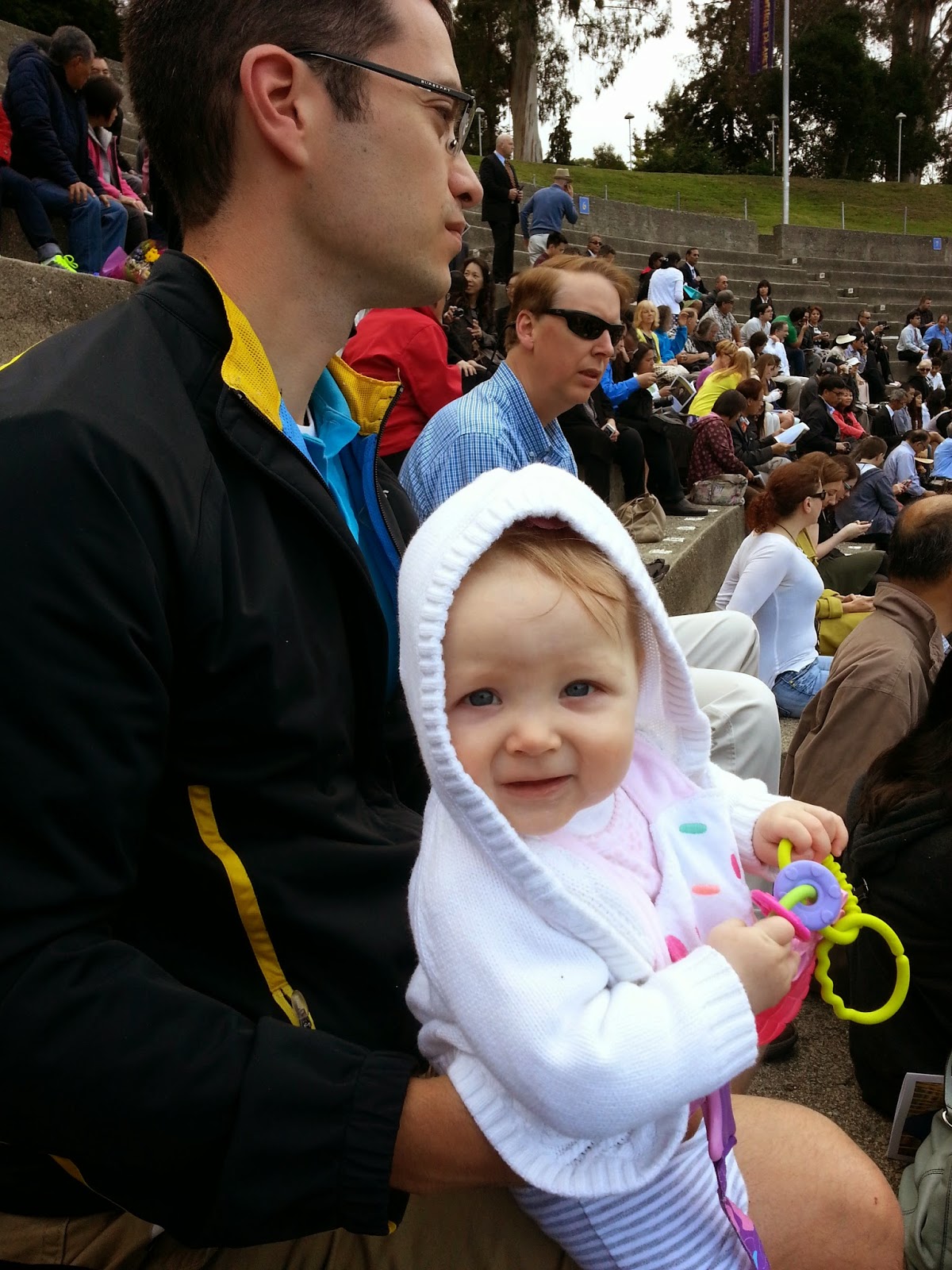 (Uncle Scott did a great job keeping Bean entertained!  I meant to bring her a hat to wear, but I forgot.  Good thing her sweaters have hoods on them!) 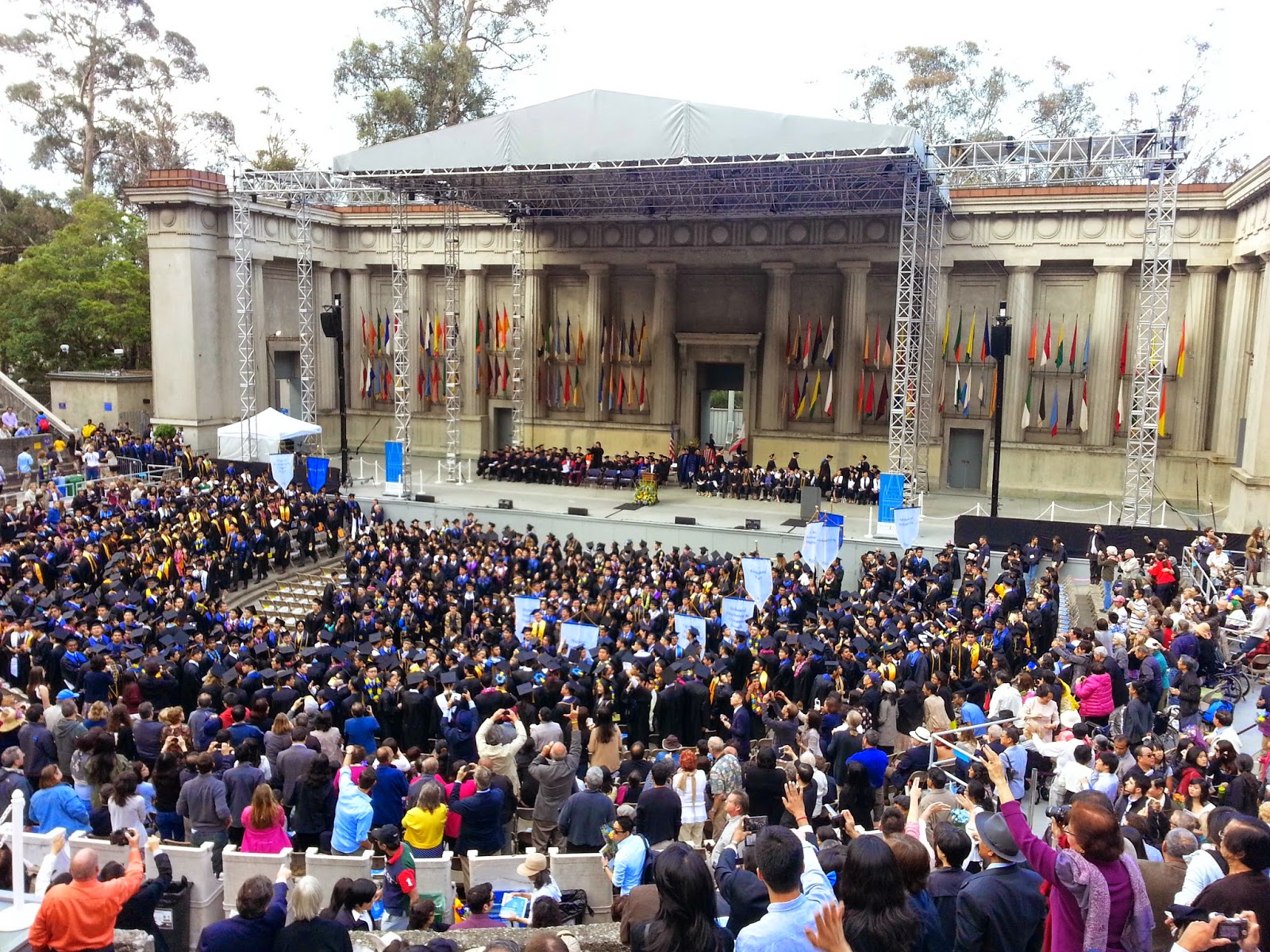 After the ceremony, we walked on campus a little, took pictures, and went to an engineering reception.  After hanging out there a little bit (and snacking on food), Steve, his grandparents, and Bean & I headed back to the hotel while we waited for the others to get back to their hotel, get their stuff and meet at our hotel.  From there, we headed to lunch and hung out at food market/court for the afternoon.  Then it was time to return Nanny & Poppy to the hotel, say our goodbyes, and head to San Francisco!  Scott & Ashley were able to take us to our apartment for the week, which helped us out a ton!
Posted by Unknown at 8:35 AM