On our first official day in San Francisco, we actually didn't spend it in San Francisco, haha.  Steve walked to a car rental (like 15 min walk) and picked up a car for us.  He then drove it back to our apartment and got lucky with a spot right out front!  I loaded the car seat into the car (So I forgot to mention that we brought a car seat with us but didn't use it on the plane.  We knew we would need it for rental cars a couple days like while in Oakland and that we would need to take a taxi back to the airport on our last day.) while Steve loaded up the other items we'd need for the day - backpack, jackets, stroller, etc- and also paid the toll for the Golden Gate Bridge online.  Once the car was loaded up, we got in and headed towards the Golden Gate bridge! 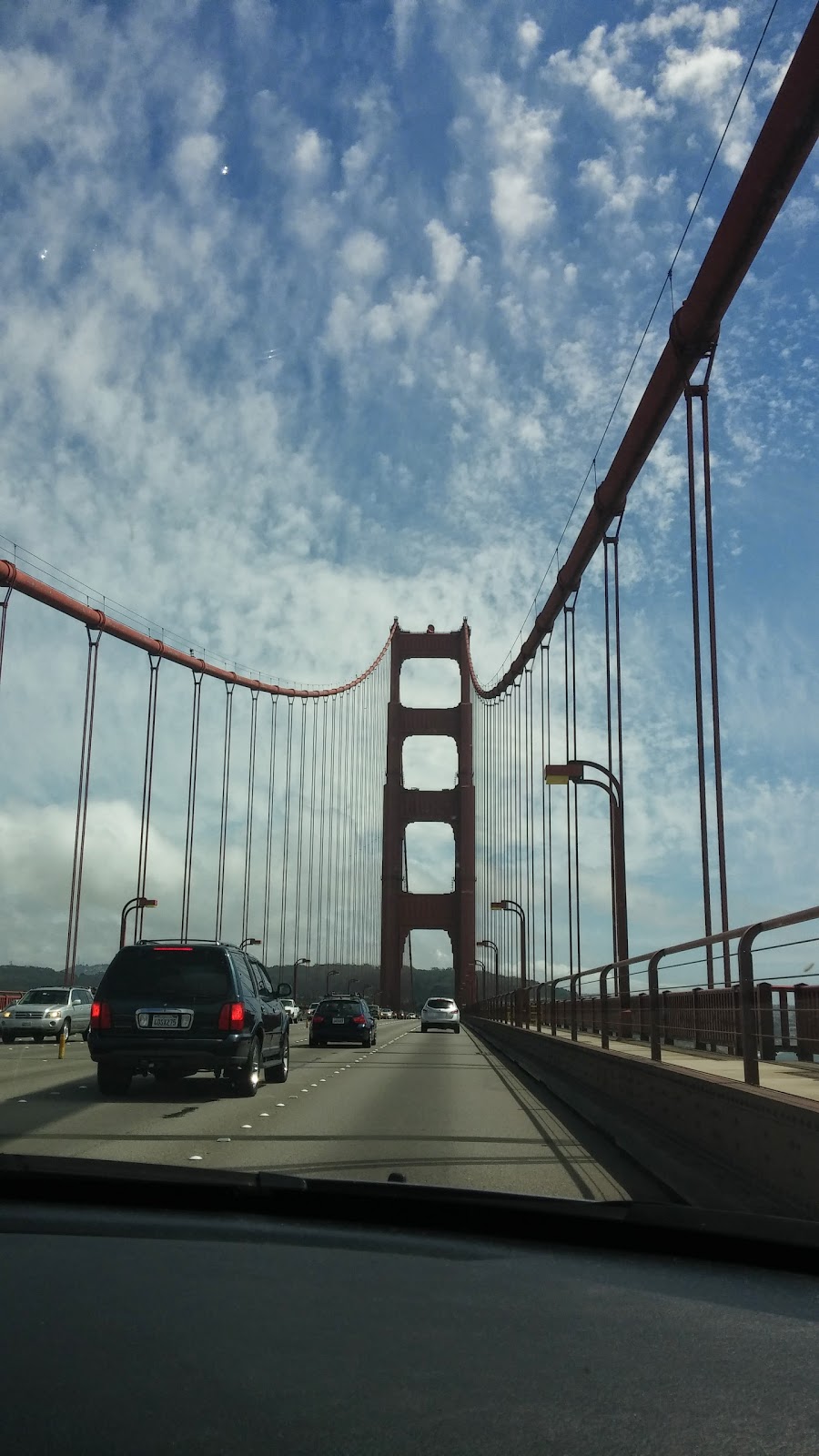 (Driving across the Golden Gate Bridge)

We crossed over the bridge and headed to Muir Woods.  It is a national park that has old Redwood trees in it.  It was neat to learn the history of the trees and see how gigantic they are.  It's crazy to think of how old they are and how the whole area used to be surrounded by those tall trees.  After walking around the trees for awhile, we loaded back up in the car and headed over to Sausalito for lunch. 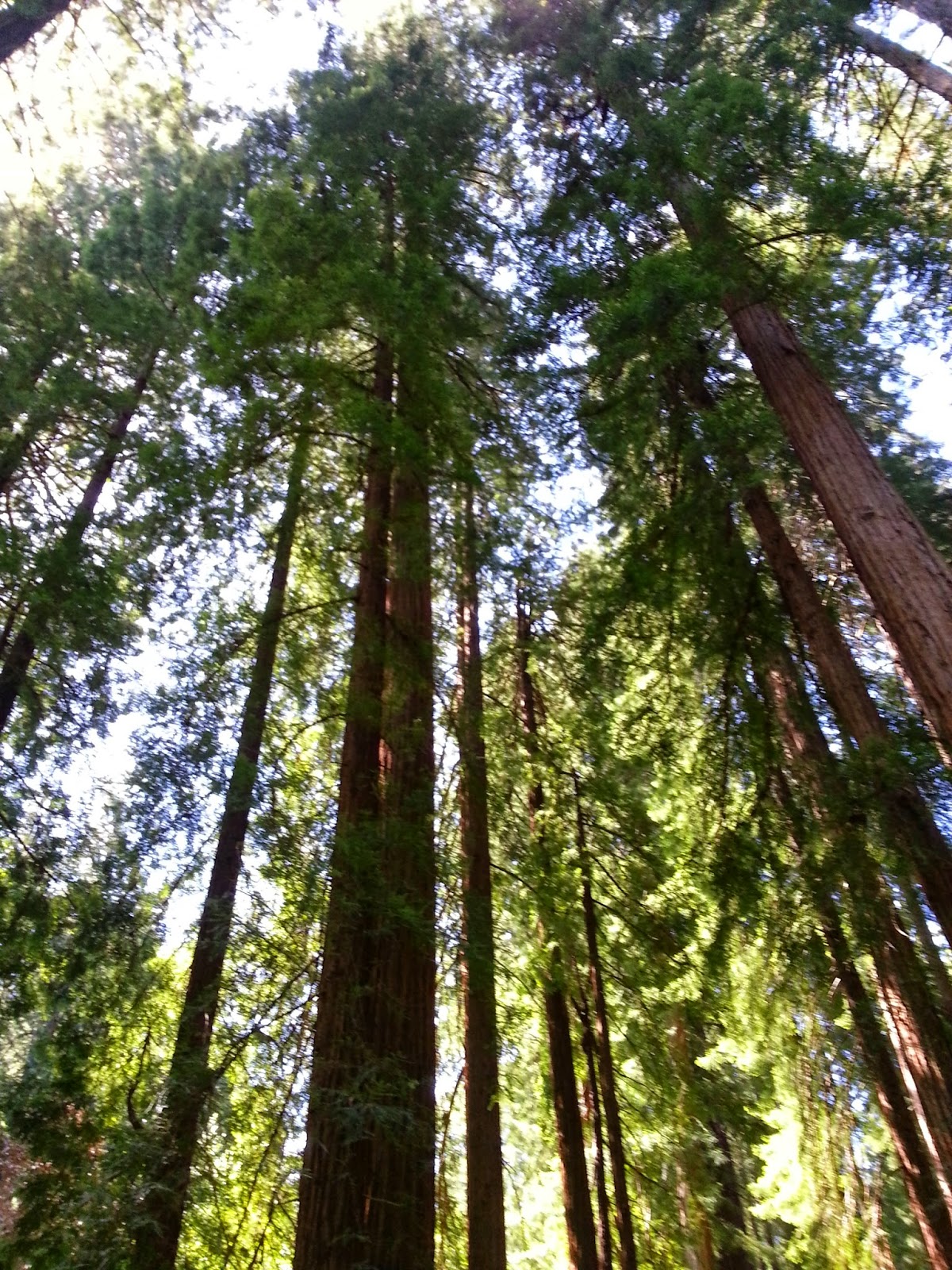 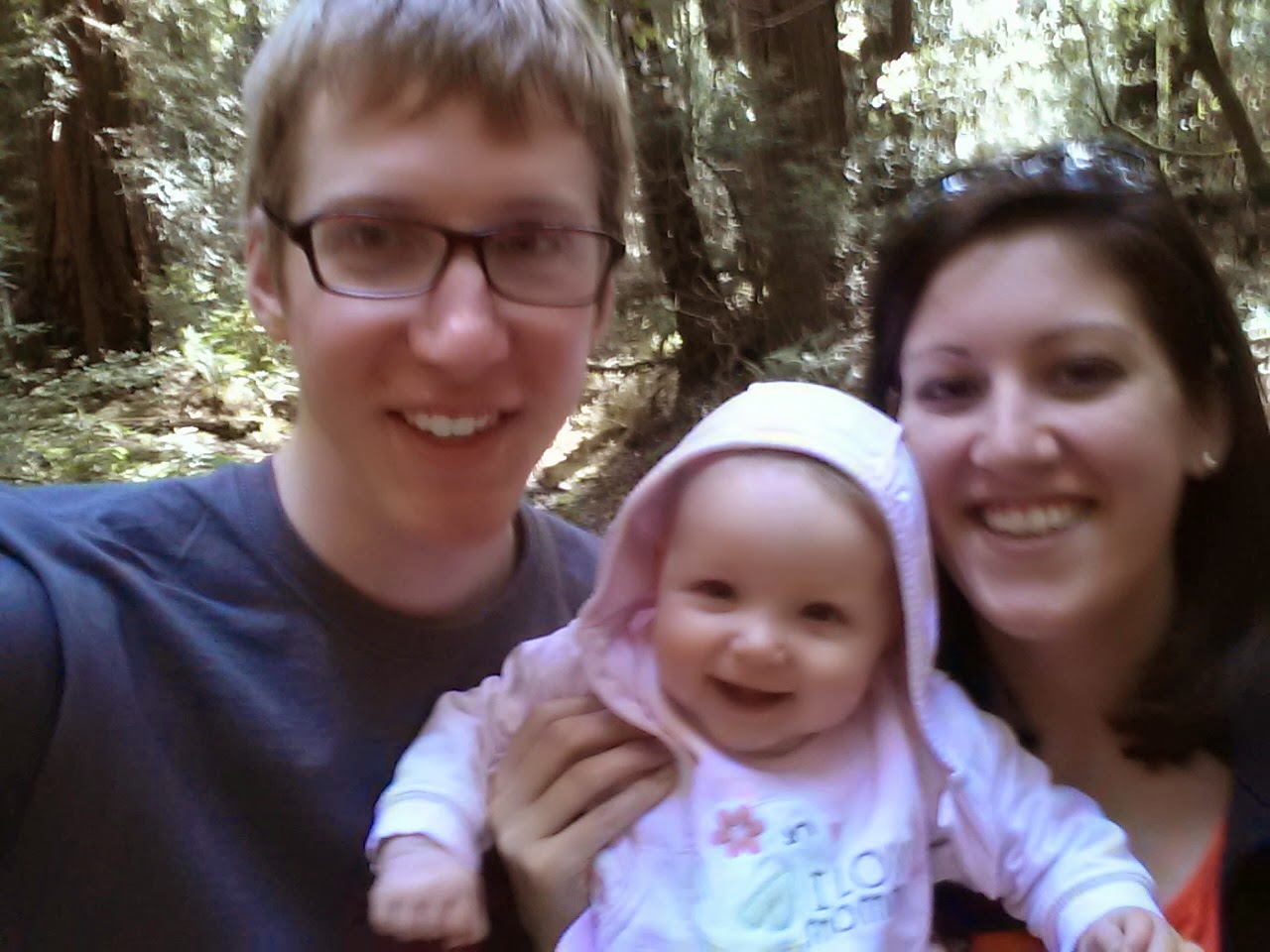 (First vacation family selfie. It was cold in the forest since there was no sunshine.  We kept Bean warm with her hood and attempted to keep her socks on her  She loved pulling them off and chewing on them, so we finally gave up on the socks.) 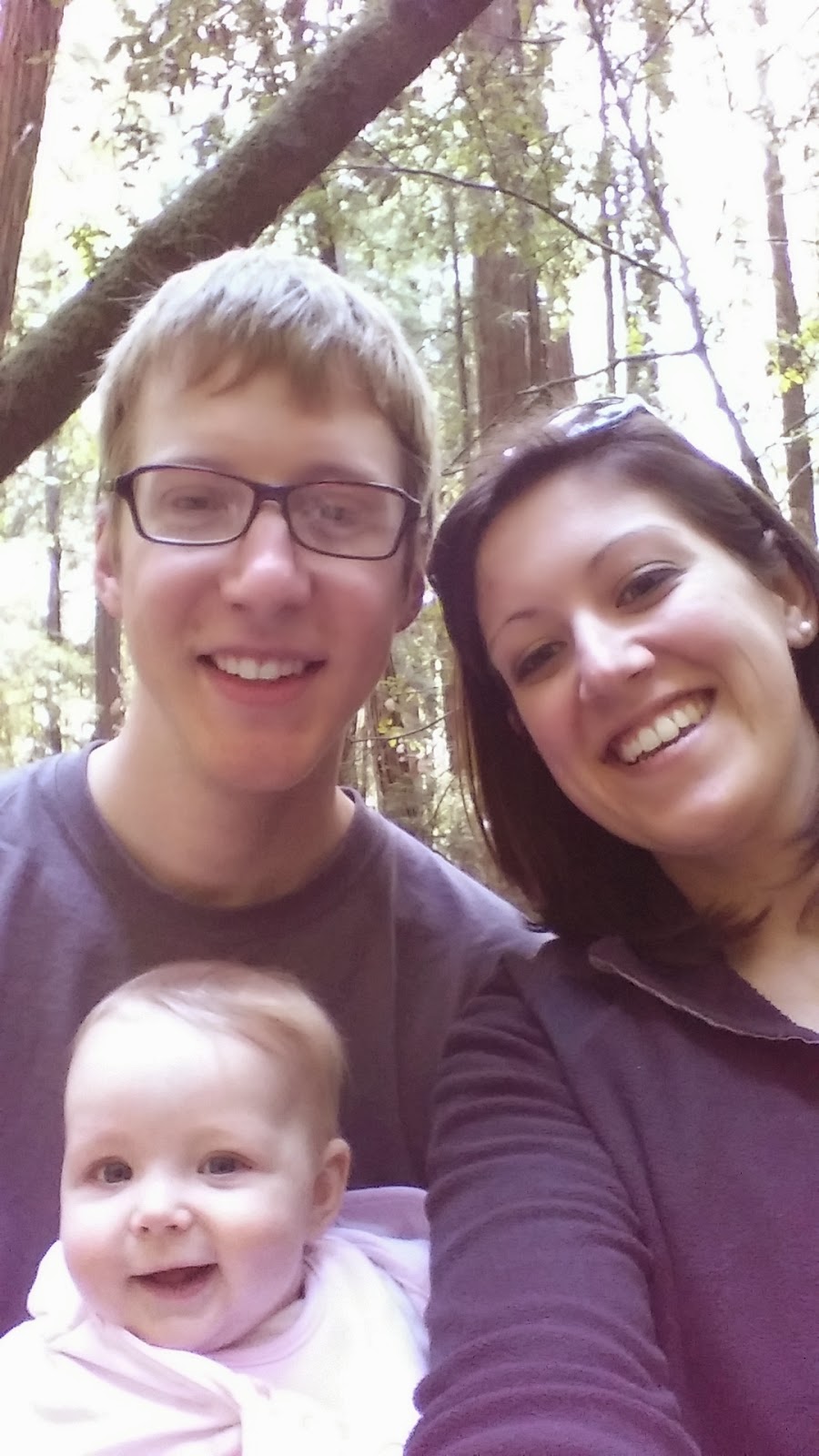 (Right after we took the first picture, Steve's phone wigged out and we weren't sure we got it.  So attempt #2 on my phone.  I thought Bean's face was too good not to share.) 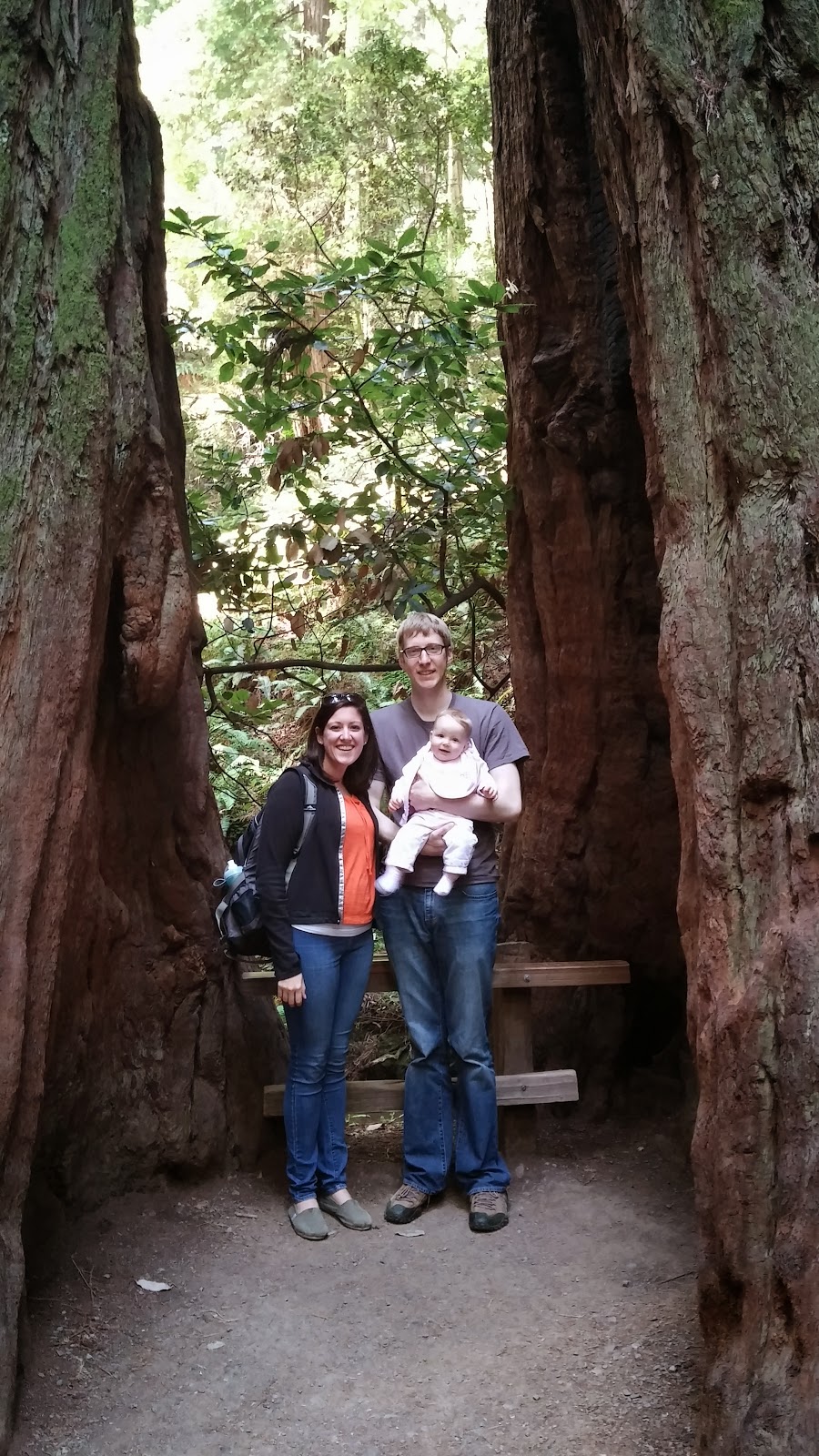 (Photo-op in a Redwood) 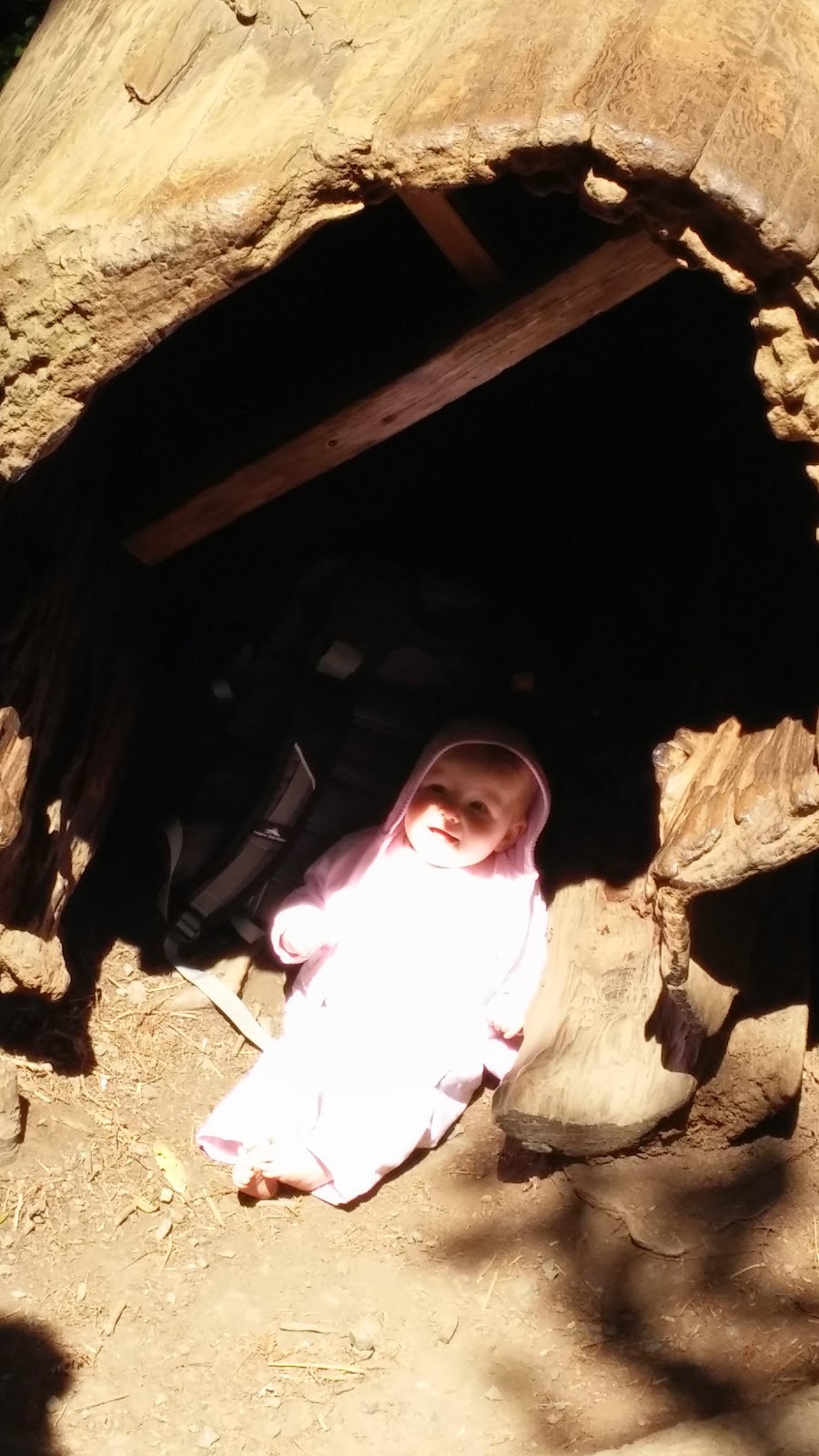 (We tired so hard to get a picture of Bean in a Redwood stump.  She can't really sit up without support, so we tried to use the backpack to help her.  Then we had issues with the sun.  This is the best we got, haha.) 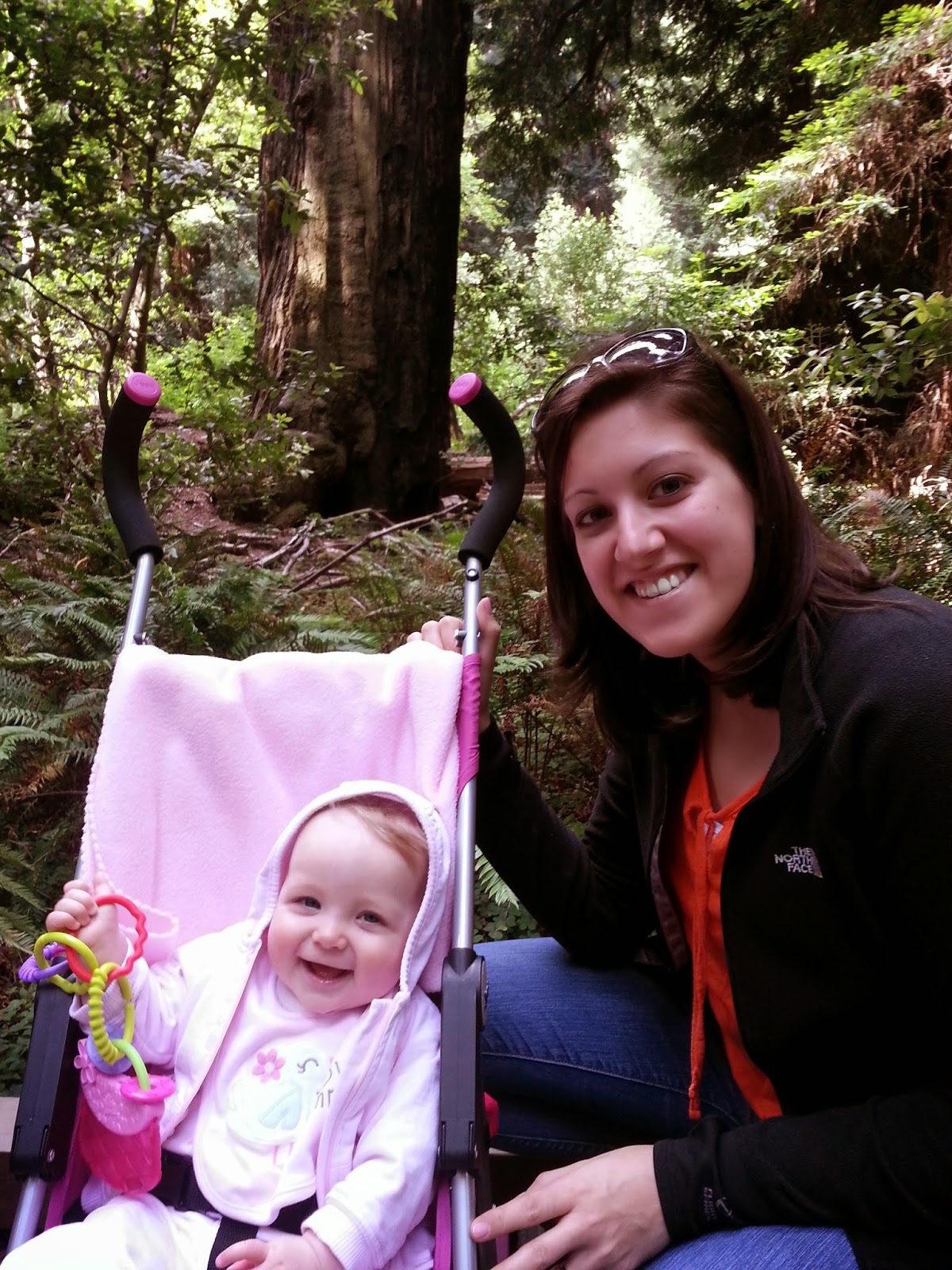 (Momma and Bean in the woods.  The park's path was made up of a wood boardwalk, so we were able to push the stroller around with no problems!)

Steve had done all the research in advance and took us to a little hole in the wall restaurant.  We sat outside, even though it was a little cold (Steve went back to the car a few times to get us proper jackets and such) and ate some delicious french toast.  Steve's french toast was deep fried and more of the consistency of a funnel cake.  He also got some bacon known as millionaire's bacon which has different spices and almost the consistency of jerky. My french toast was typical thick bread with a lemon citrus flavor. Yum-o! 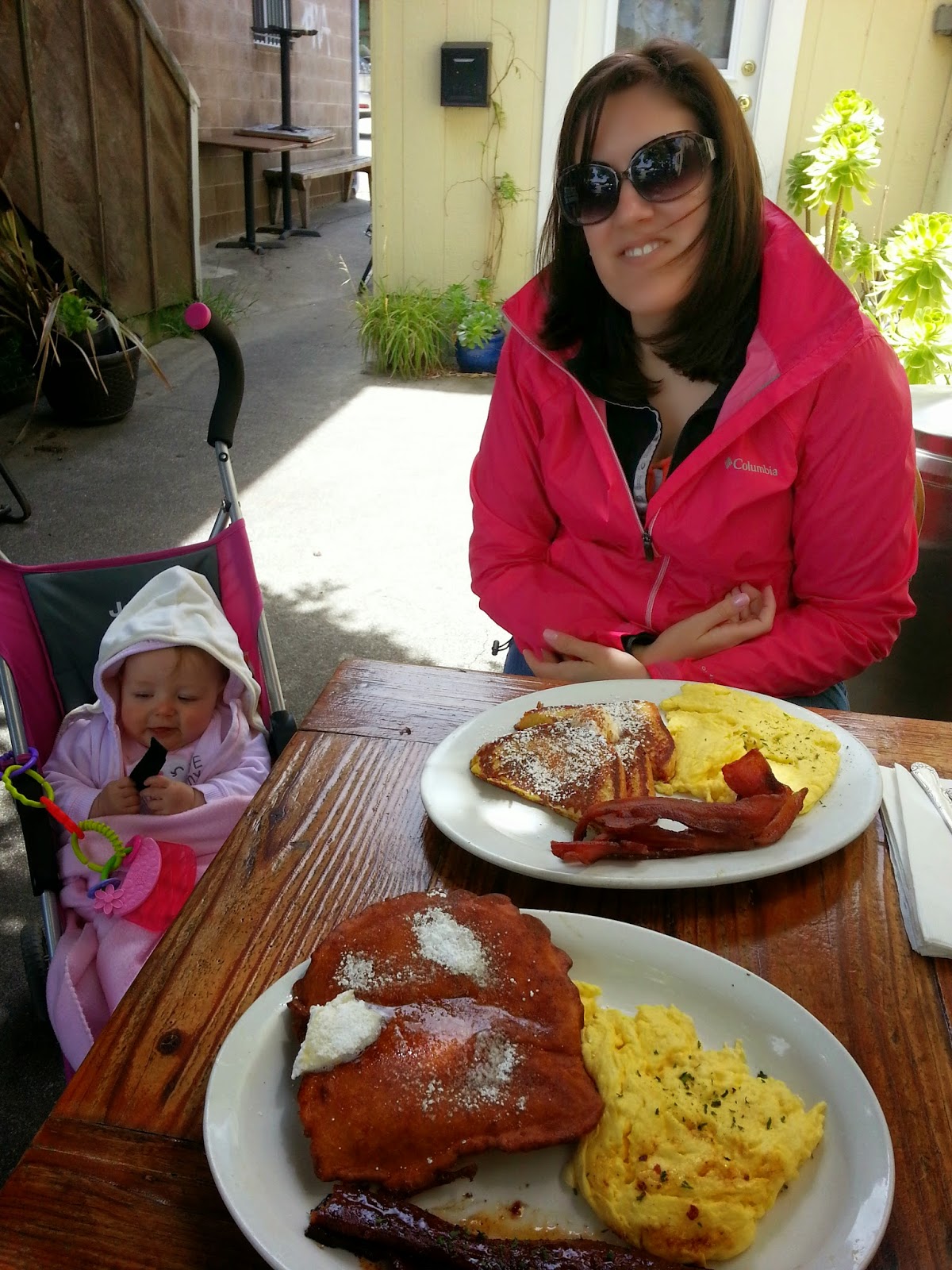 After lunch, we drove through Sausalito to go hike to Point Bonita Lighthouse.  We relied a lot on google maps/gps and took us a couple of guesses as to which path to choose, but we finally saw signs and made it to the lighthouse.  We had to walk along the rocky coast edge, through a man-made cave, across a suspension bridge, and finally around the lighthouse.  On our way back from the lighthouse, we saw some seals swimming in the ocean and laying down on a little sandy patch which was neat. 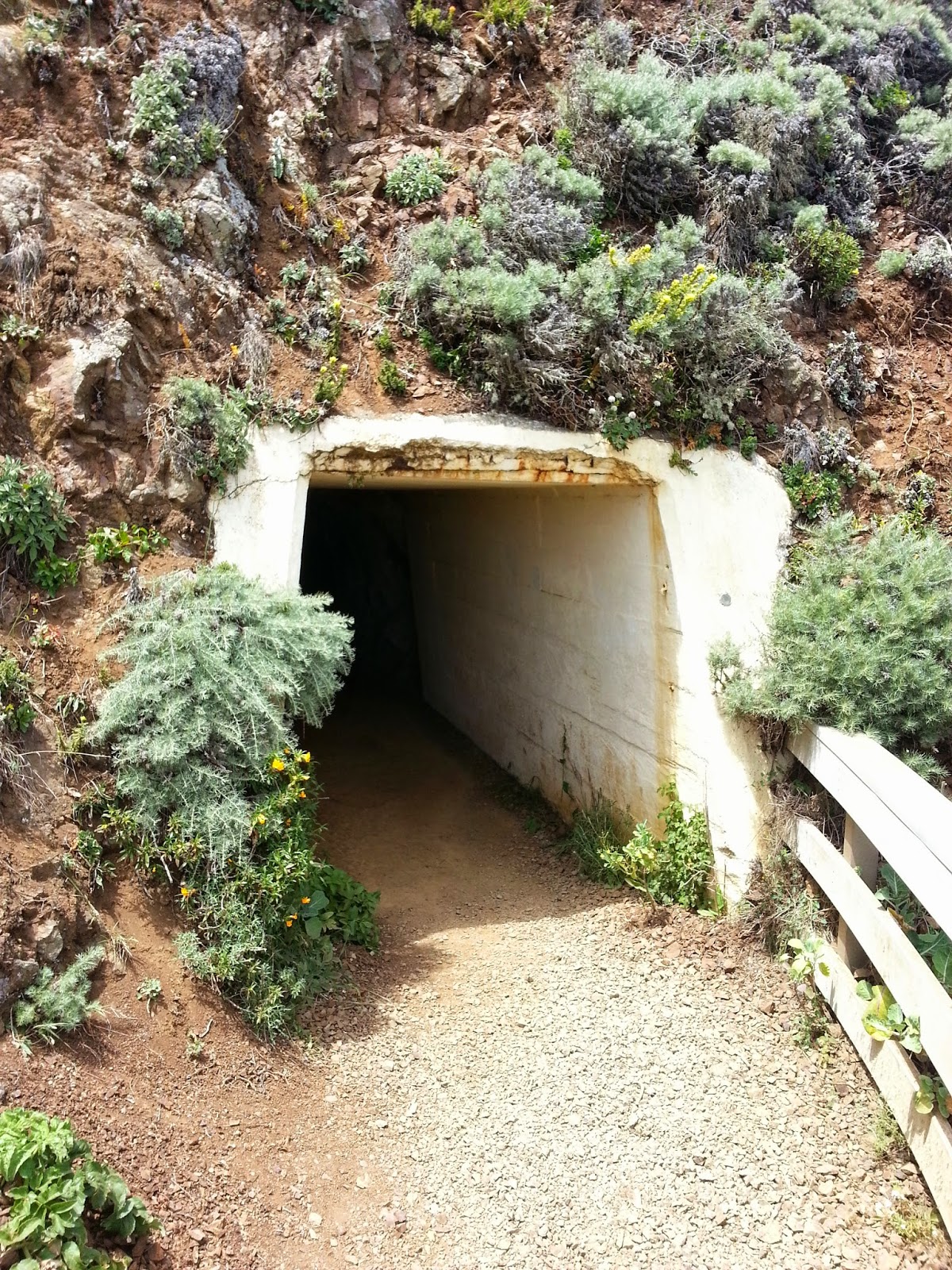 (About to walk through the man-made cave to get to the lighthouse.  I hate caves, and I hate heights, and I'm not the biggest fan of the ocean.  I got to experience all three of these hates on this one simple walk.) 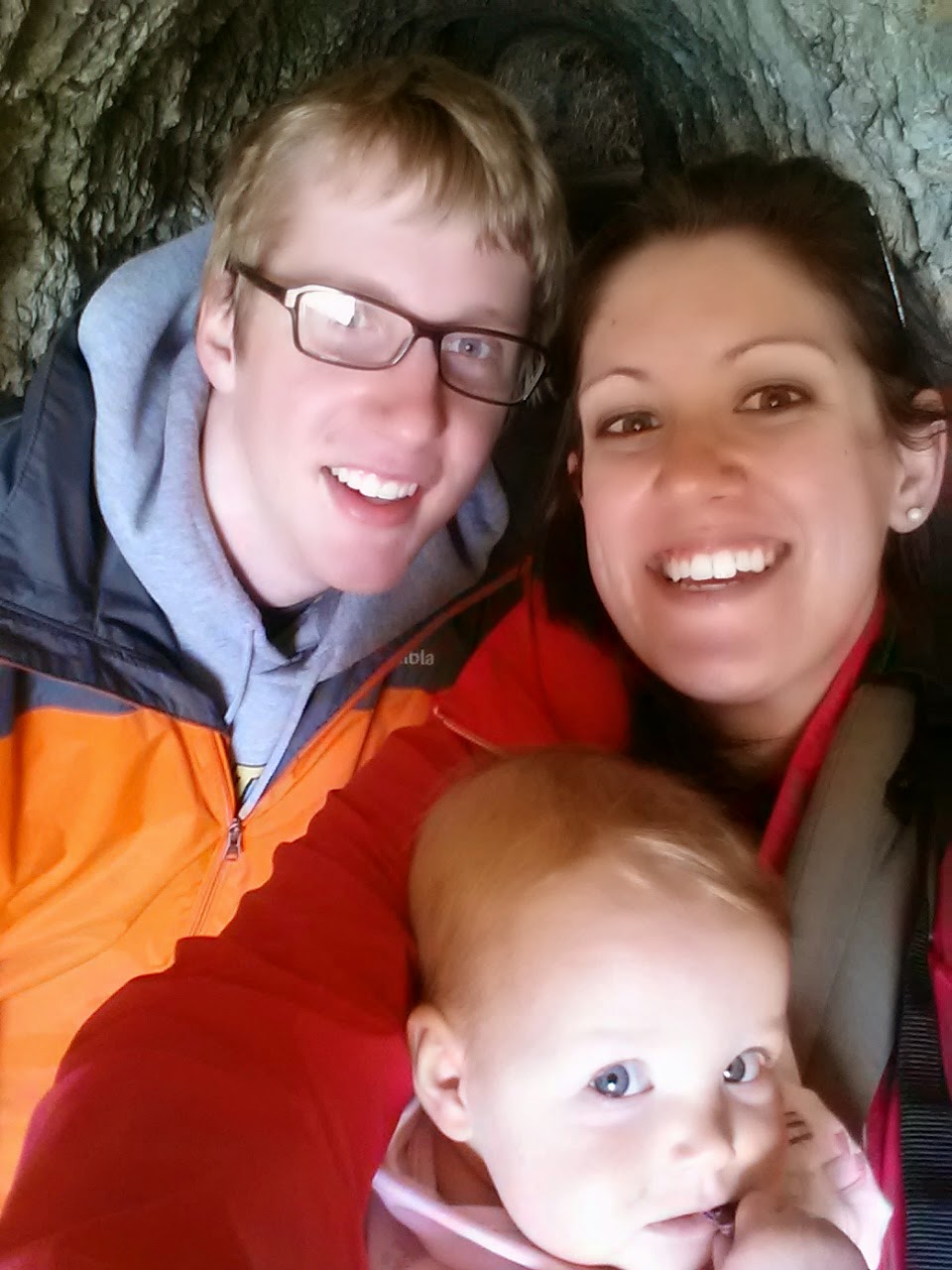 (Inside the cave.  Bean is unsure of what is going on. It was also pretty windy and cool along the coast, so we were all bundled up.  Bean hates the wind, so I think she was enjoying being out of it in the cave.) 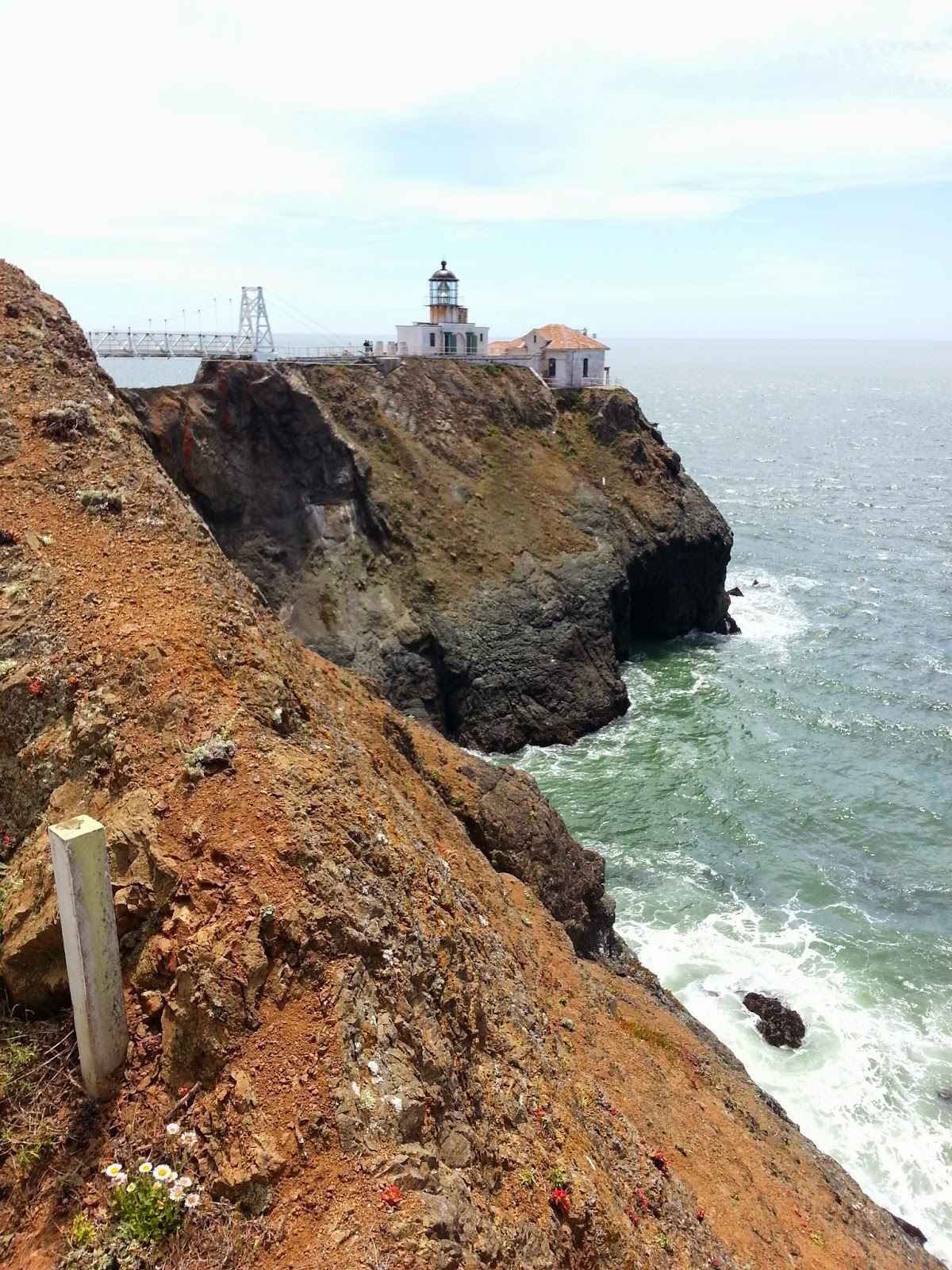 (There's the lighthouse and the suspension bridge!) 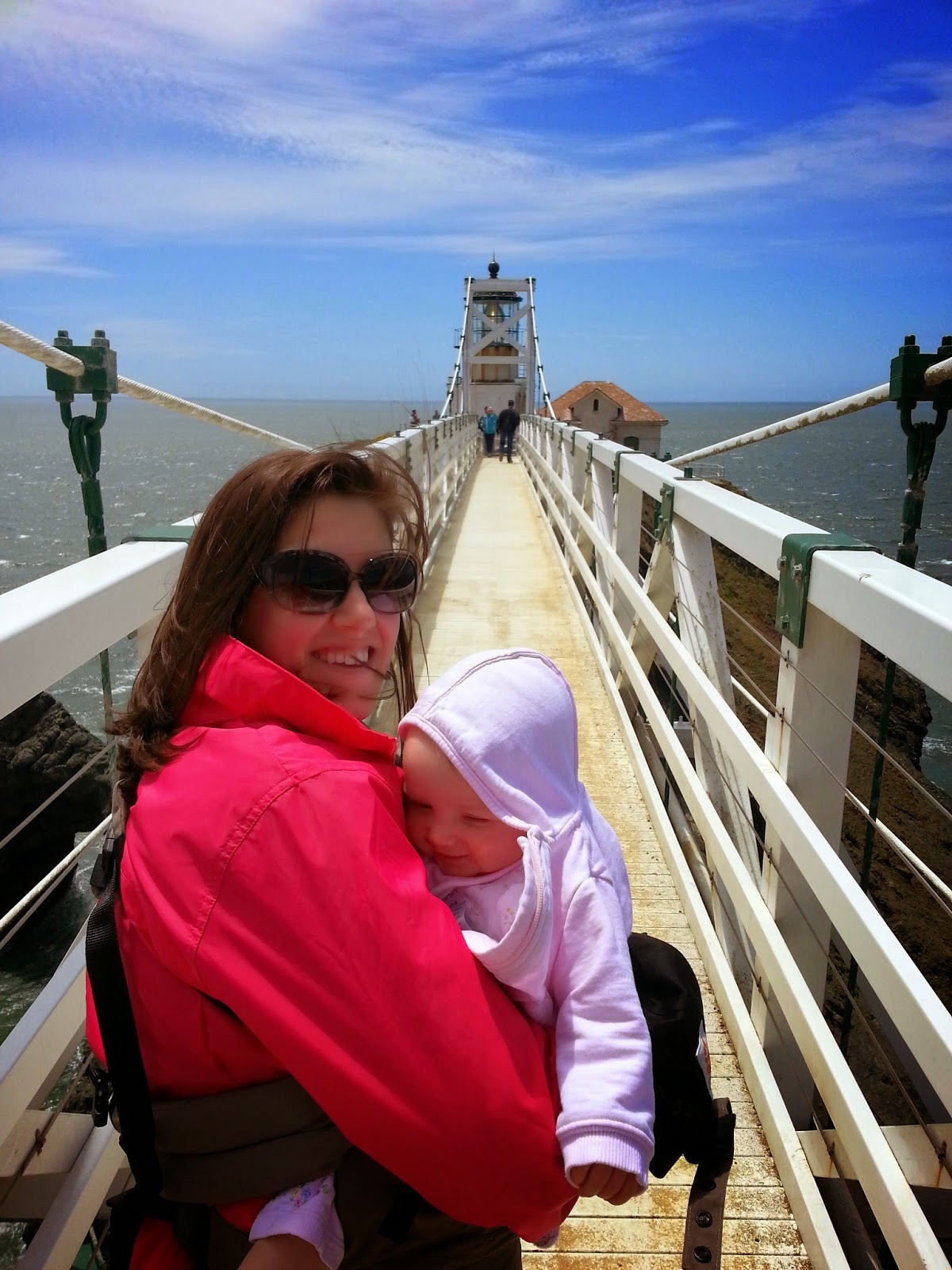 (I may or may not have been freaking out to cross the bridge.  There were park rangers on both ends and would only allow so many people on at a time.  There was a group of young kids behind us, so I just wanted to be on one side or the other before the kids got on!  As you walked, you could feel the bridge bounce and sway.) 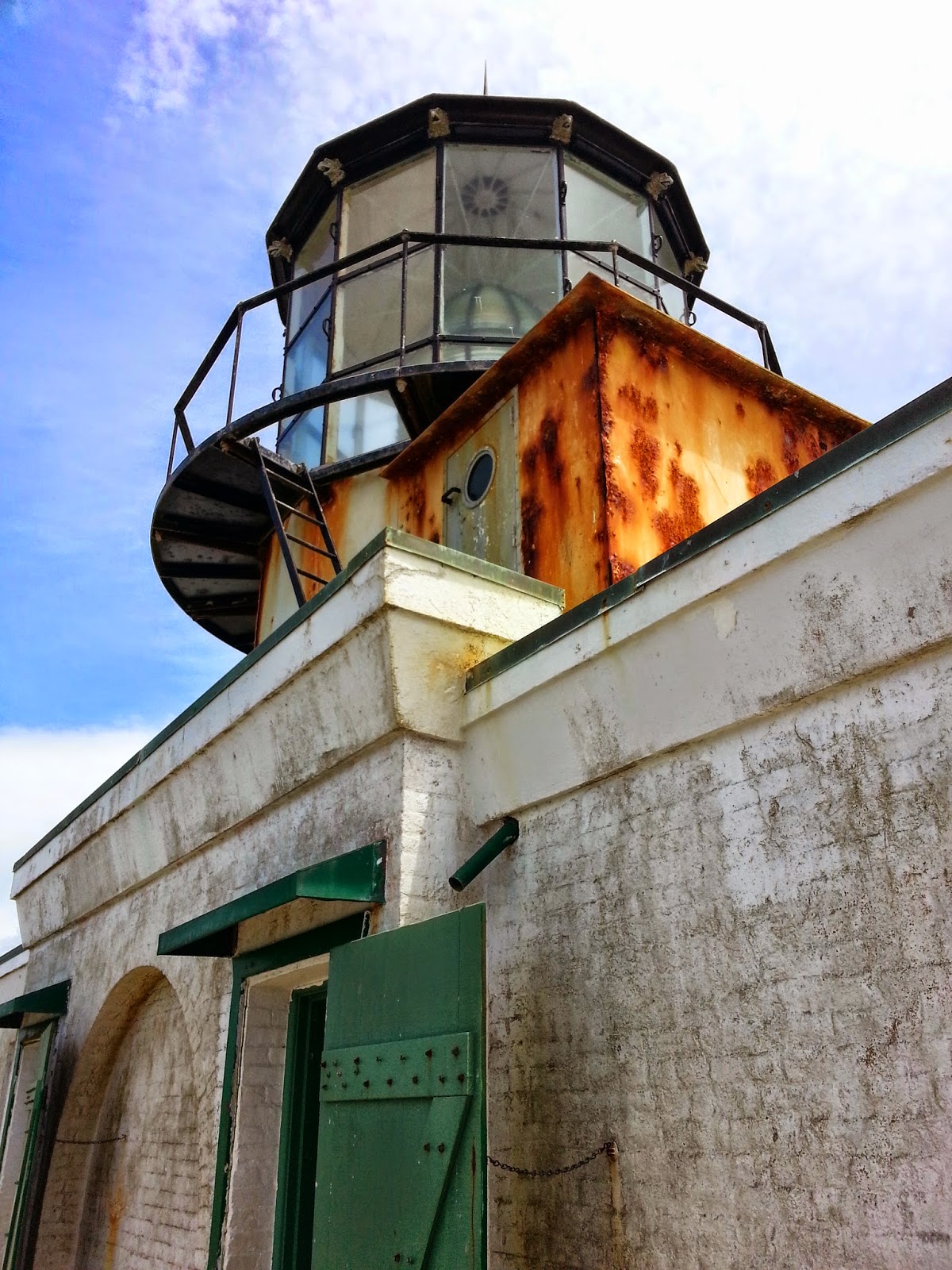 (Point Bonita Lighthouse -- area from the Pacific Ocean into San Francisco Bay is full of unseen rocks and hazards so many ships wrecked in the area.  The lighthouse would help guide the ships through fog and try to help steer them into the bay properly.)

We drove around Sausalito a little more, stopped and took some golden gate photo ops, and enjoyed the ocean views.  We had plans to stay in Sausalito for dinner, but we were getting tired and decided to call it a day.  We hit up a grocery store on our way back to the apartment and got a few things like milk, cereal, bread, etc for the week.  After getting the apartment and unpacking the car, Steve took the rental car back while Bean took a nap and I watched tv- ha! 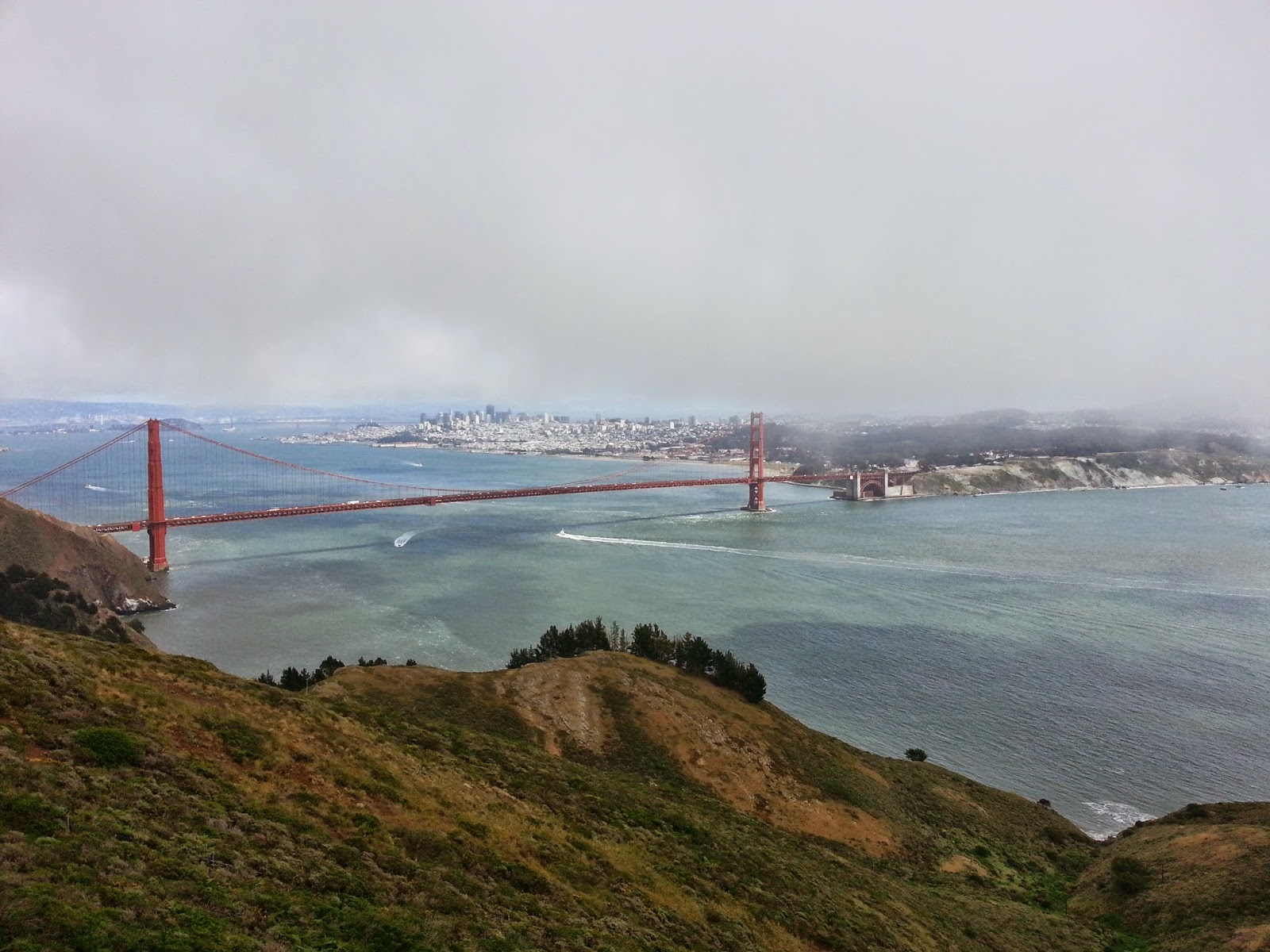 (One of the best views of the Golden Gate Bridge.) 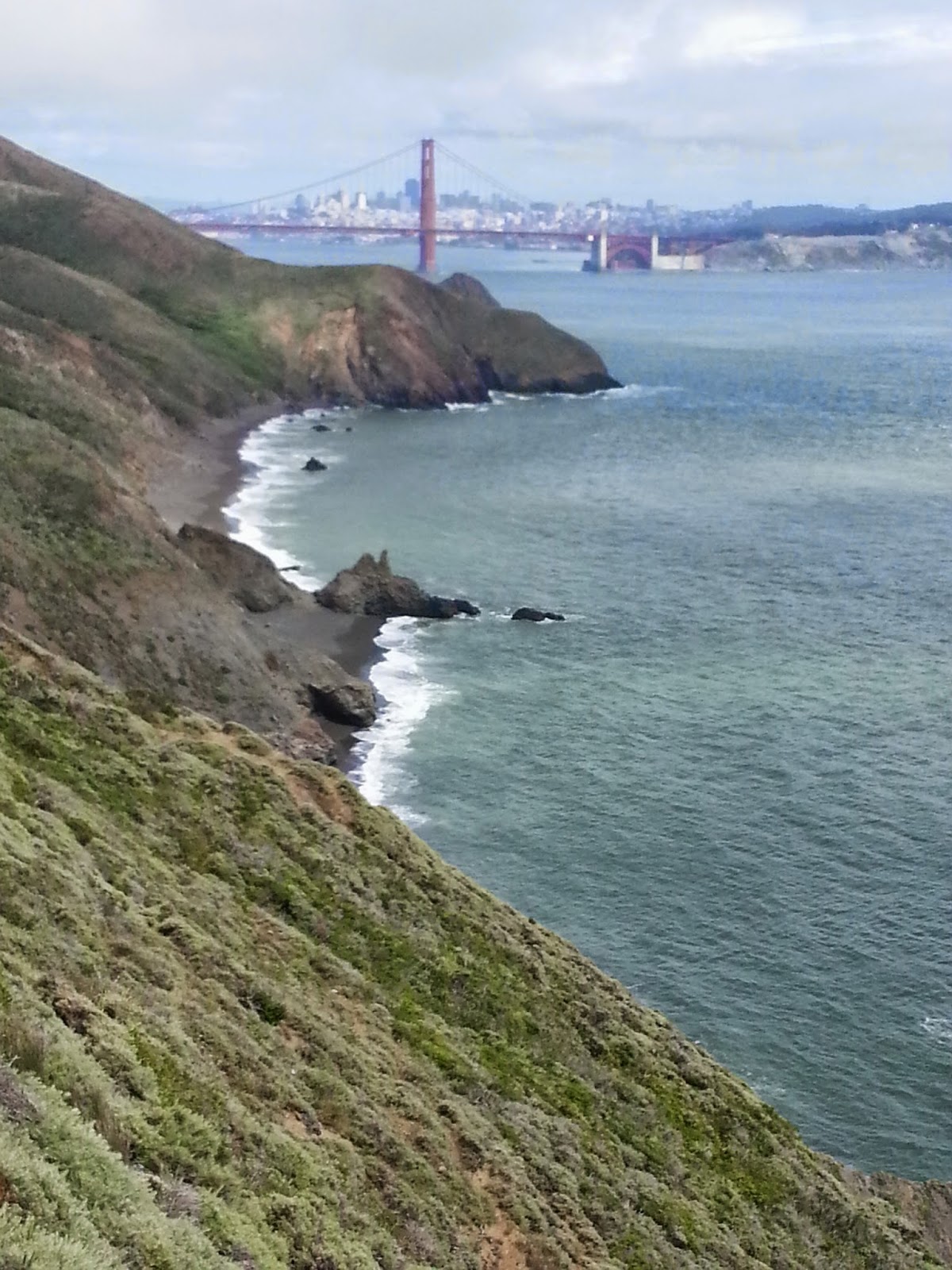 (I think it was at this point Steve was wanting to read more about the bridge and the area we were in, but Bean was asleep in the car and this crew of crazy Europeans were parked next to us and huddled around our car and theirs.  Then one of the guys put on a clown nose and they were all passing around booze.  I gave up on Steve's view plight and sat in the car. Ha)

We took it easy the rest of the day and just scrounged up some dinner from the groceries we got.  I think we were in bed by 9 that night! We were tired!
Posted by Unknown at 7:00 AM