**Note: The beginning of this day is a hard story to tell.  You know how things happen, and people say, "Oh someday you will look back on this and laugh"?  Well, I wasn't laughing then, and I'm not laughing about it, yet.**

We left our apartment an hour before our set reservation for the Galleria Borghese.  It was located in northern Rome, and we had estimated it take us about 40 minutes to walk there, so we'd have a 20 minute buffer for error.  We didn't have the real tickets, we just had a voucher reserving our entrance.  At the time, I did not understand how the gallery's system worked.  Apparently, there is a 2 hour window that a set number of people are allowed to tour the gallery.  If you have not redeemed your voucher 10 minutes before your reservation, they let others in until the set number is hit.  At the time of your reservation (which ours was 9 o'clock) if you are not at the gallery, they won't let you in.

Along the way to the gallery was the Trevi Fountain.  We decided to take the opportunity to make a quick spot and take a picture in front of the fountain (the morning is the best time to visit the fountain, otherwise you have to fight all the tourists).  We got our picture taking by a couple (and we took theirs), threw a coin in the fountain (per tradition -- if you throw a coin in the fountain, you'll one day return to Rome), and continued our journey towards Galleria Borghese. 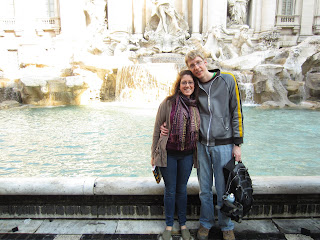 (Remember these smiling faces now, because we were not smiling for the next 45 minutes)
We were a little unsure of how to get into the Borghese Park.  We knew the gallery was positioned on the east side, but the park is surrounded by walls, with entrances in certain locations.  We got to one of the south east entrances, but the gate was locked.  We decided to turn around and head the other way to the west (where we knew a gate would be opened due to it's location on the map).  By this time, it was going on 8:45 and we were in danger of losing our voucher reservation (plus, we had 15 minutes to enter the building regardless of voucher).  We still had quite a ways to go & increased our walking speed, even running at times.  We made our way into the park and had to ask for help several times.  People just kept pointing eastward.

We had finally got close to the right area, but there were several pathways and we didn't know which was the right way.  We could see the Galleria in the distance just as a clock began chiming 9 o'clock.  We were too late.  I wanted to keep going just in case they hadn't reached the set number of people (this is when Steve explained the whole system and that they shut the doors at 9 not letting anyone else in, regardless of numbers).  We were literally like 5 minutes late.  We were winded from running, tired from walking an almost constant hour, and I was of course emotional at the missed reservation.  (Steve was surprisingly okay with the situation, even though we had paid for the missed reservation)  We found a nearby bench & recovered form our "wasted hour".  Steve's recovery was more physical, where as my recovery was more emotional.  We took in the views of the park, watched the random dogs running around, and the decided on a new plan for the day. 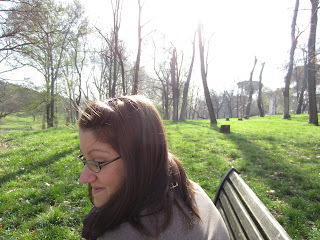 (Right after the meltdown, and recovering on the bench.  Steve was trying to make me laugh, I'm still not laughing over this one) 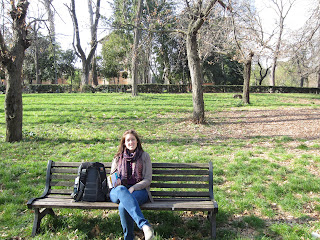 (After discovering we'd get to do some other things that we weren't sure would fit into the day, I found a renewed sense of contentment and was ready to take on the day for the second time.) 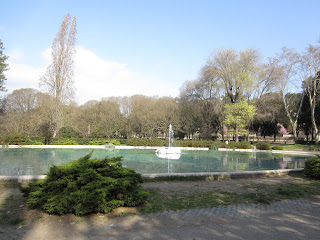 (Here is a fountain in the park that we enjoyed.  I may have enjoyed this fountain just because Steve bought me a croissant to try to smooth over the fact that we ran for 15 min for no point.)
After stopping at the fountain with a croissant & Fanta in hand, we backtracked out of the park and headed Southeast towards the Capucchin Crypt.  The crypt is a series of 6 rooms in the basement of a church that is decorated in scenes made of over 4,000 bones from friars.  It was a pretty neat (as well as disturbing) display of art.  We weren't allowed to take pictures, but you can visit this website if you are curious.

Next, we headed to the National Museum of Rome.  We were originally supposed to visit this museum upon arrival into Termini on day 1 (before the 5 hour delay turned fiasco).  In the museum, we got to see some sculptures, remnants of a ship, and coins.  After exiting the museum, we grabbed a slice of pizza to share & headed towards another church. 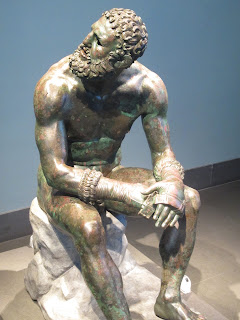 (A pretty cool bronze sculpture of a boxer.  Rick Steve's called him "Sylvesterous Stalloneous" in his guidebook.  Oh Rick Steves.) 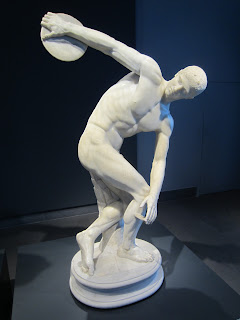 (Another neat marble statue of a discus thrower)
The church we visited first was Santa Maria Maggiore.  Underneath its alter is housed the supposed remnants of Christ's manger bed.  They are stored within a glass and gold encrusted shell. 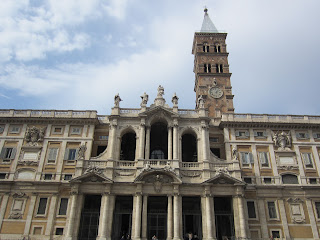 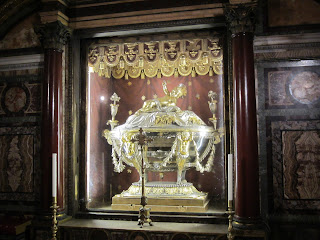 (Supposed remnants of Christ's manger)
After the church, we headed towards the Colosseum in search of San Clemente's.  This church is by far one of Rome's coolest treasures (and in my top 5 things to see in Rome).  It is a 12th century basilica, atop a 4th century basilica, atop a 2nd century pagan temple.  For 5 euro (the best 10 euros we spent on this trip), you get to visit all three layers!  Being able to visit the bottom 2 layers, helps make it real how modern day Rome is literally built on layers of history.  As you toured each layer, you could feel the history (or maybe just the cold dampness) and tell the age of each layer according to it's construction.  On the bottom later (2nd century pagan temple), you actually get to see an old alley way between the pagan temple and nearby home.  Unfortunately, you couldn't take pictures, such a shame! But you can visit and explore the website. 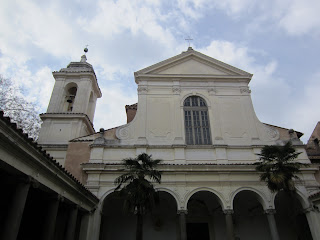 (Outside of San Clemente, while standing in the courtyard.  This is the outside of the top layer, or 12th century basilica.)
After San Clemente, we decided to head towards the Colosseum.  We got to the entrance location; however, there was a big 4k race going on with barracades set up all around the Colosseum.  We walked around the barricades hoping for a spot to enter the Colosseum, but realized there was no way to cross to the other side (even though we could see people sitting on the lawn outside the Colosseum, but guess they were somehow affiliated with the run).  We were herded with the sea of people until we somehow reached the Victor Emmanuel monument and the end of the race.  In front of the monument, there was a mob of people watching River Dancing on a set up platform.  The whole area was trashed with heat blankets, cups, and papers.  We stopped to people watch and decided to go to Capitol Hill & the Capitoline Museum.  Before heading there, I got to witness a man throwing up in the middle of the street surrounded by people; and we both got to watch paramedics call an ambulance & load up a former runner. 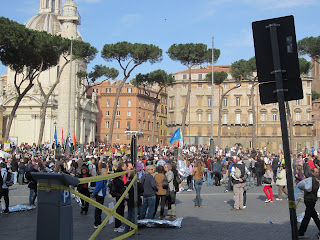 (Here is the mob of people at the end of the race.  The River dancing platform is just off the picture to the left) 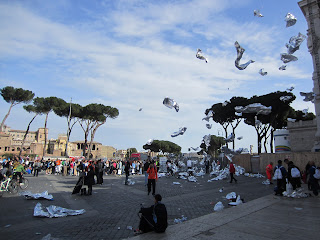 (The actual end of the race and the end of the barricades is straight on in this picture.  Notice all the trash -- the runners' discarded heat blankets would kick up with wind (the next day, we saw remnants of the blankets caught on high places).  The group of people to the right of the picture are huddling over the sick runner that was loaded up in the ambulance in the next picture.) 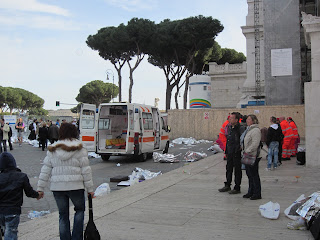 (Yes I am a shoob and took a picture of the paramedics helping the sick runner.  First off, I thought it was crazy that paramedics are decked out in bright orange; secondly, I was just curious of how they'd treat the guy.  The man was looking pretty bad (even Steve said he looked a little ghostly).  They loaded him up and took him away.  He was a runner from the race, because he still had his number pinned on him.)
We left the craziness of the race area and rounded the Emmanuel Monument in order to bound up Michelangelo's "Grand Staircase" up Capitol Hill.  The Capitoline Museum is what makes up most of the area now.  Inside, we got to see some more sculptures, various artifacts, and a section of the old pagan temple of Jupiter (Zeus in Greek mythology).  In the Tabularium of the museum, we got to see a neat overview of the Roman Forum. 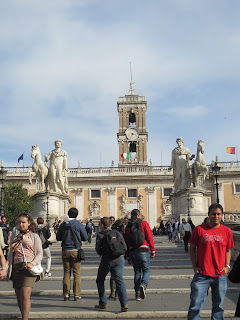 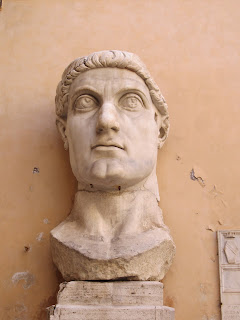 (Pieces of a statue of Constantine that once stood near the Colosseum.) 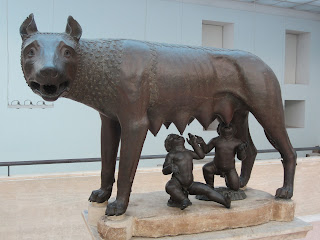 (Symbol of Rome -- She wolf statue with Romulus & Remus) 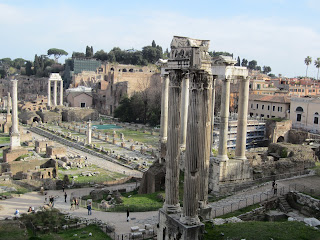 (View of the Roman Forum from the Capitoline's Tabularium)
A little after 5pm, we made our way back to the apartment to rest our legs & minds.  The mornings failed race to Galleria Borghese as well as a packed (both our schedule & hoards of people) day has worn us out!
We decided to go crazy tonight & go to a restaurant for dinner.  On this trip, we've pretty much been scrounging for food because we don't want to deal with the language barrier & because we've been on the move.  Tonight, however, we ate out at Pizzaria da Baffetto 2, just north of Campo de Fiori.  They had an English menu & were prepared for tourists.  Steve chose a cheese brick oven baked pizza, while I had Rigatoni Carbonara.  For drinks, we had cans of coke & coke light (I went ahead and had a "diet" coke on the trip even though I gave it up for Lent.  I drank it out of curiosity and to not be complicated in ordering).  The bill came to 20 euros.
After dinner, we went for a stroll in Piazza Navona again.  While there, a little dog was running around in the inside of a fountain basin (the water level was low in the basin).  We cut the stroll short due to being chilly (I don't know if I've addressed this in the blog, but I did not pack properly.  I had it in my head that the weather would be in the high 70s, forgetting it would cool off at night.  Most of my clothes were 3/4 sleeves, but I did pack 2 long sleeve light jackets & 1 hoodie.  I layered almost all the clothes I packed for myself every evening.  Steve had at least brought a thick jacket and didn't suffer nearly as much as I did).
Posted by Unknown at 3:43 PM