A Pop of Color

Our front door has been in some serious need of new paint.  Back in December when we moved in, we changed out the all the locks on the doors.  The new handle we picked out for the front door, was a different style that had been previously used.  When I took off the old handle and put the new one on, I had to use some putty to cover up some holes and the previous paint color (green) could also be seen.  After tyring out 3 different red paints (found in the basement), I tried to cover up the putty and green paint, but it left the door in 2 different shades of red.

We have been meaning to pick out a color and repaint the door since December, but just never got around to it.  With a housewarming party just around the corner, we finally picked a color and repainted the door.
It was hard to pick the color just because the paint chips are so small and you're trying to match it to a big house!  We decided we wanted to try to match the slate color on the roof, but we ended up with a shade a little brighter and bluer than the roof.  Oh well, the new color definitely draws your eye to our house!  (Plus, we had to compete with a dark purple door right across the street!) 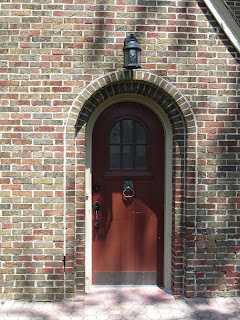 (It's really hard to tell in this picture, but the rectangular area around the door handle was a brighter shade of red.  I think it may have been the original color but with sun fading, the two didn't match.  I liked the red color, but Steve felt it blended into the brick too much and we needed something to complement the brick instead of match.) 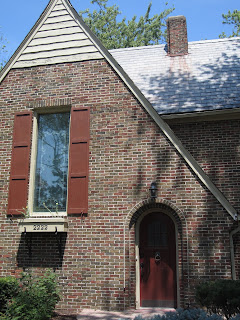 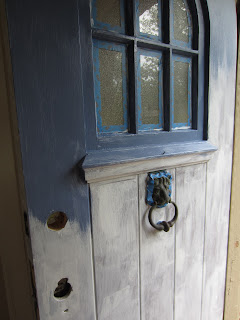 (I had to take off the locks and handle, tape up the window, and tape up the lion head.  The lion head is actually held on with bolts that come through the other side; however, the bolts have been painted so much they are sealed to the door.  Next, I had to do a little more puttying, sanding, and then primed the door.  Lastly, I got to paint the new color!  Here, it looks like a mild/dark blue.) 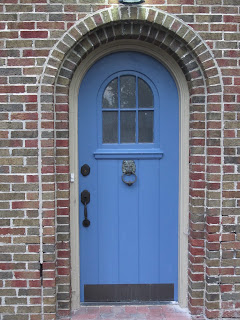 (AHHHH!!  A bright blue door.  It take a little getting used to. It seems pretty bright, but so far we've gotten some good remarks about it from neighbors and friends -- or they're just lying to us.) 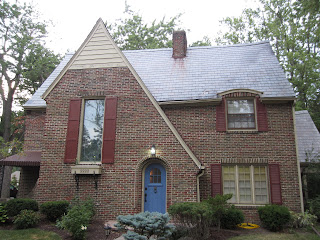 (We wanted people's eyes to be drawn to the door, I think that goal was met!  The door does make the roof look a little bluer, but I'm afraid the door is a little too bright.  Steve doesn't want the shutters to match the door, but they may be painted a different color later.  I think if we put some bright blue flowers in the flower box, it may help. . .)
Posted by Unknown at 10:38 AM