It has been a lifelong dream of mine to undergo LASIK eye surgery.  Growing up, I would joke that it would be a college graduation present to myself.  However, life happened.  I met and married Steve, we graduated, moved to TN, looked into buying a home, moved to Ohio, went to Europe, and finally I had LASIK!

I was absolutely TERRIFIED of going through with it.  I was a bundle of nerves the day of, and thank goodness my mom went with me.  She knew just what to say and do to help calm me down.  Even though I had paid the morning of, there was a part of me that just kept saying "back out now".  But, I did it and I think I'm glad I did it - ha ha.  I'm still dealing with post-surgery symptoms like itchiness, dry eyes, tired eyes, goopy medicine around the eyes, and such.

The surgery itself probably took less than 5 minutes.  Before going into the laser room, I had to undergo a bunch of numbing drops (the night before, I had to start doing my own antibiotic drops).  I had a little melt down after they took these foam wedges soaked in numbing drops and placed them under my eyelids for a 10 seconds.  Have you ever had foam wedges placed under your eyelids???  Even though I couldn't feel it from the previous drops, it sort of got to me in my head, but my mom was able to sit with me through all this and she got me focused onto other things.  My eyes started stinging while I was waiting and I had these visions of the numbing drops not working and feeling the whole laser process, but the assistants put more drops in and assured me there would be continual drops throughout the process -- whew!


**Disclaimer -- the next two paragraphs do describe the LASIK process, read at your own risk -- hahahaha!  Just keep in mind, if I could go through it, you can read it!**

I was then walked into the laser room (my mom had to wait outside) where I laid on this swiveling bed that could be moved to both lasers.   After being swiveled a coupld of times to make sure everything was lined up, they taped down my right eye and placed a "ring" over my left eye that suctioned to me eye (my vision went grey).  I was swiveled to the left laser that created a flap in the cornea, opening up my eye.  I was then swiveled back to the middle, ring taken off (vision was blurry), that eye was taped closed and they did the same process to the right eye.  Only when they were done creating the flap with the right eye, I was swiveled over to the right laser which actually did the correcting of the vision.  After the right eye was done with the laser, I was swiveled back to the middle where they flushed out the eye, placed the flap back over and then taped my right eye shut.  They then un-taped my left eye, opened the flap, swiveled to the right, used the laser, swiveled back to the middle, flushed the eye, closed the flap, and I was done!!

Like I said, I was in the laser room for under 5 minutes.  They had a tight schedule and an assembly line of patients so they had it down to a science.  The whole thing was really bizarre because I was able to see things but not feel it.  I had a light that I had to stare at during both lasers to make sure I didn't move my eye (which I was assured if I did, the laser did track the eye movement).  The absolute WORSE part was when they were closing the flap, they had this little instrument that I could see move back and forth over the eye, and there was pressure so I know it was touching the eye, but I couldn't feel it. It was very disorienting and I got all light headed from the process (just me freaking out).

When they had finished, they helped me sit up and I was rejoined with my mom in an exam room.  Now that it was all done, and I was over my nerves, I did get faint.  They had to lay back the exam chair, open some smelling salts (which is horrible to do to somebody), and give me some juice.  I was feeling better and they sat the chair back up and examined the eyes to make sure everything closed smoothly and properly.  They said everything looked excellent and I had done a great job despite my explaining how nervous I was beforehand.  I got a little dizzy again, but I had a granola bar that they let me eat which solved the problem.  I hadn't eaten in like 4 hours which did not help the whole dizziness.  (I had to be at the office in Columbus -1.5 hr drive- at 10am, but I didn't get called back for surgery until noon.)

After they saw I was okay and that my eyes looked great, they sent us on our way.  I just had to keep my eyes closed for at least 4 hours after the procedure (sleeping encouraged) in order to kick start the healing process.  I also was given a pair of sunglasses that wrapped completely around the eyes which I had to wear on the way home (I even wore them in the house because of the sensitivity).  I fell asleep in the car for the first hour, then we stopped and ate some lunch (which I did have my eyes open for that).  I kept my eyes closed for the last half hour in the car, but I was awake.  When we got back home, I fell asleep again.  Somehow, I slept through a crazy storm with 65+ mph winds.  There's more on the storm portion of the day's events in the next post.

I have 3 different eye drops that I have to use on a pretty strict schedule.  I have "tears" to use every half hour, a steroid every 2 hours, and an antibiotic every 4 hours.  After day 3 (today!), the steroid changed to every 4 hours along with the antibiotic.  I am also restricted on different things for the next week -- no makeup, dirty/dusty environments, or strenuous activities, and no swimming for 2 weeks.  I can't rub my eyes, and even have a special pair of goggles to wear while sleeping.

The day after surgery, I had to return to the office for an appointment to make sure things still looked good.  They did an eye exam and said I have 20/20 vision already in my right eye, but the left eye is weaker (which is normal, and that my eyes will change over the next week on a daily basis).  They also cleared me to drive.  I go back for another appointment this week.  Everything looked great with the eyes, except for that my left eye has a hemorrhage (blood vessels broke) from the ring they used in making the flap.  They said that's normal and that can take up to a month to disappear.

People have asked if it's worth it, and I think it's too soon for me to answer that.  Right now, I'm frustrated with all the drops -- they leak through my eyes into my sinuses and I taste it in my throat, which is gross; the steroid is really goopy and makes the area around my eyes sticky, especially in the lashes; and my eyes feel very tired.  But I will say, it's nice to lay on a pillow and not have my glasses get in the way.  It's also weird not to reach for my glasses in the morning or after showering.  Totally bizarre.  It's also weird to wear sunglasses again! 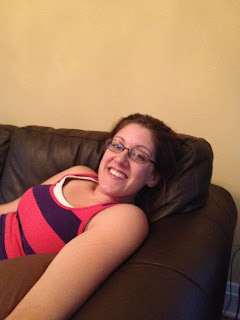 (The night before surgery and my last picture wearing glasses!  I know you can't tell, but I was completely freaking out from this point on.  I didn't even sleep the greatest because I just kept thinking about what could go wrong.  You have to read through a consent from that releases them from liability on certain situations and I definitely should have read way sooner -- the night before just added to my nerves._ 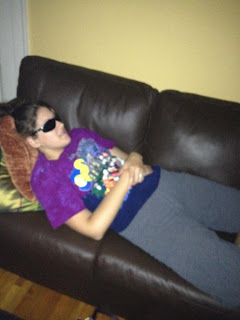 (My mother snapped a picture of me rocking out the wrap-around sunglasses while napping.) 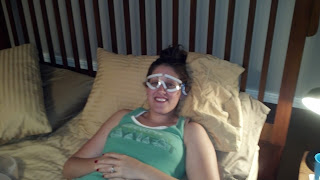 (HAHAHA, these are my awesome sleeping goggles!  They aren't as bad as they seem, but they do make my face hot -- which may be more form the high heat and minimal AC.  I only have to sleep in these for a week and then I should be cleared to go without them.) 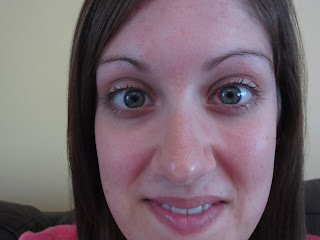 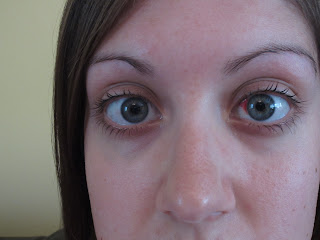 (Here's a clearer pictures with the hemorrhage.  It's the red spot on the right eye -- well, really it's my left eye, but the right eye in the picture.  I was told that the red will fade and it'll turn yellow.  They said it's just like a bruise only on your eye.  It throws me off when I look in the mirror, and I know Steve isn't used to it either.  Although, he's not used to me not having glasses on either -- even though I remind him that when we met and got married I rarely wore my glasses and just relied on my contacts.  I got rid of my contacts in November of last year, so I guess I'll give him a few more days to get used to no glasses.)