This past Saturday, the whole Adams Family (my sister's family) came over to visit for the day and drop off the last niece to stay -- Allie!!

They showed up early afternoon and stayed through dinner.  While they were here, Steve and Chris saved the world (by playing Starcraft on their computers.)  Although, I know they lost a few rounds so they didn't save the world the whole time.  While they boys were busy playing, the girls also did lots of playing.  The little girls made sure to bring all their American Girl dolls and supplies and played dolls all afternoon.  Is it sad that I have more dolls and clothes than all three of them combined?? They always enjoy playing with my dolls and clothes so they had a good time with all the stuff combined.

We also managed to spend some time outside on the suped-up Slip'N'Slide.  When we were in Tennessee, we had a single lane slide, but this year we upgraded to a double Slip'N'Slide with boogie boards.  We have a little slope in the backyard which was a hit. 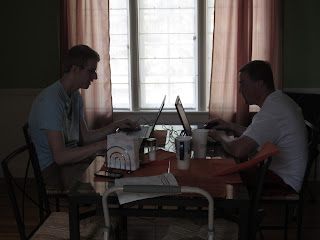 (They guys staying cool inside while "saving the world" as they put it.) 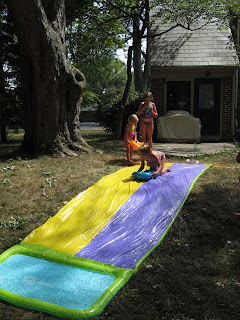 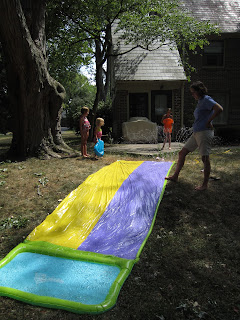 (Because the slide was placed on a slope, the pressure was off on the tube on the side, so the water wouldn't spray onto the slide.  Amber had to control the pressure by stepping on it.  Each child wanted a different amount of spray:  Emily wanted lots of spray, Allie wanted a medium amount, and Gabbie wanted little spray.  Each one would freak out over the previous persons spray amount because they were concerned they wouldn't get the amount they wanted.  Sheesh.) 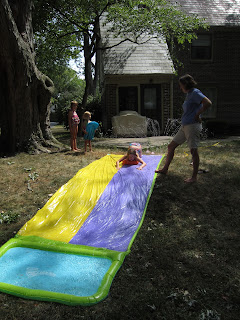 (The girls didn't really understand the point of running and jumping.  They'd run, stop and jump to their knees before scooting off on the boogie board.  It was a funny site watching each one attempt to jump and glide smoothly.  Allie somehow had the best technique in sliding the whole way.  She tried to teach Emily, but she didn't really know what she was doing.  It was just luck.) 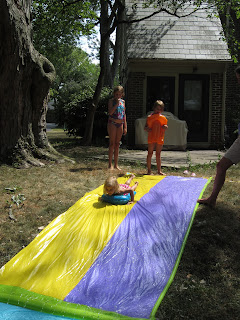 (Since Gabbie didn't want a lot of water on the mat, she had to scoot herself most of the way.  When she'd get to the slope part at the end, gravity would take over.) 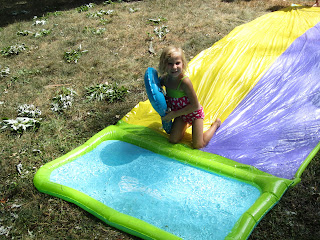 (How cute is she?!  Each girl especially loved to just sit at the end in the little pool.  But the next person wouldn't want to wait for the previous one to get out of the pool so lots of crashes occurred.  No one got injured and they mostly got along.  When they tried to race, the person in the purple lane would always end off the mat at the bottom because of the slope, which caused some fights over who got which lane.  Oh well, fun was had and that is the important part!

After the outside fun, we turned on a movie (Gabbie wanted Hairspray, of course, but the older one's won out with Jumanji).  Amber and I pulled dinner together.  After dinner, Chris, Amber, Emily, and Gabbie loaded up and left, leaving our special time to begin with Allie.
Posted by Unknown at 12:25 PM