After much anticipation, we finally had our official "housewarming party".  We wanted to wait until most of the interior had been repainted and the yard was decent.  We spent an entire weekend solely devoted to the party's preparations which included painting the front door; purchasing and stringing up outdoor lights; borrowing a picnic table, chairs, and serving items from our neighbors; cleaning the house from top to bottom; and of course making some delicious food.

Steve sent out an email about a week in advance letting people know of the party.  We had about 18 "yes" responses, so I planned on food for 20-30 people.  The party was to start at 6:30, but we had told people to feel free to come and go as they pleased.  When 7:00 rolled around and no one had showed up, I began to get nervous.  But, soon the doorbell rang and people came!  Instead of the anticpated 18+, we only had 8 show up.  However, this was the core group of people we've been hanging out with, and we had a great time sharing our home with them! 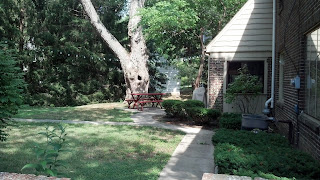 (The lights were a big hit!  We got the idea from the previous owners.  They had lights strung up outside and we had hoped they would leave them.  They of course took them, but we found a decent deal on some online and now have our very own!  We have left them up since the party and don't have any intention of taking them down soon.  We've gotten compliments from our neighbors and we look forward to using them more!  The red picnic table was borrowed from our neighbors for the party.  It ended up being the center of the action.  Everyone wanted to eat outside, so we spent the majority of the evening outside around the table.) 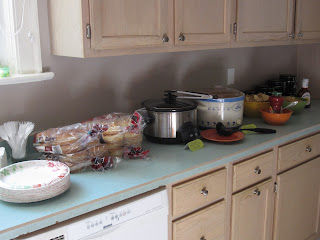 (I went a little crazy on the food.  We had pulled pork and sloppy joes.  I had enough food to feed an army, and barely a dent was made.  No one even at the sloppy joes!  The pork was the big hit and I made a spicy homemade barbecue sauce that was also a favorite.  My neighbor helped me out and made some deviled eggs to go along with a veggie tray and chips that I set out.) 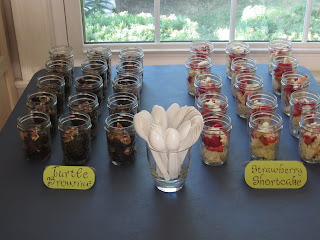 (Thank you Pinterest for all of your lovely ideas.  I made these little "jar" desserts that were also a big hit.  I chunked up brownies, drizzled them with caramel sauce & added pecans for turtle brownies along with chunked up shortcake, strawberries and whipped cream for strawberry shortcake. Yuuummmm) 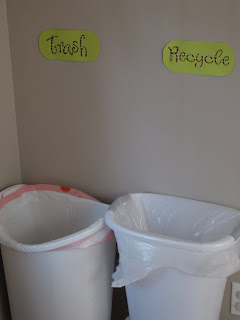 (I know I am a crazy person, but I'm okay with that.  I made little signs for all the food, drinks, as well as the trash receptacles.  I didn't want to be asked a bazillion times (or apparently 8) as to which was trash and which was recycle.  One of Steve's co-workers razzed me about it all night.  Just blame my OCD.  Oh and the labels were made via my Cricut machine.  The machine cut out each individual letter and tag, but I had to glue the letters onto the tags.  It took a little longer than needed, but it was a good distraction from all the cleaning and preparing.)

Everyone, of course, absolutely loved our house.  They were all shocked that we owned a house in this neighborhood.  The area we live in is one of the oldest neighborhoods in Lima and has stayed in the best condition.  They all loved the architecture, space, and decor of the house.  They are all eagerly anticipating party 2.0 (TBD).
Posted by Unknown at 2:36 PM