Over the weekend, my AWESOME parents came to visit.  They braved the 100+ degree hit and helped us clean up our yard, cut down and trim tress, and haul all the debris to the edge of our yard for city pick-up.

Because of the storms that went through a couple of weeks ago, the city of Lima decided to do a debris pick-up free of charge.  We wanted to take advantage of the offer and clean up some of our trees to be hauled away.  We knew the pickup was this week, and only had one weekend to get the stuff done.  We were in need of supplies (and muscle power, especially since I am not allowed to get sweat or dirt in my eyes) and my parents came up with tools in hand.

They brought a wheelbarrow, chainsaw, pole saw, rakes, clippers, my sister Sara, my niece Emily, and my brother's dog Reese.  My parents' were dog-sitting for my brother and if we wanted their help, the dog came as a stipulation.  Ha ha, even though we are not pet (Ramses doesn't count as a pet, he's a family member) we enjoyed Reese's company.  She's a really good dog and just laid around most of the time.

Their visit also happened to correspond during a very busy time for Steve.  He had to work 12 hours on July 4th, 14 hours on the 5th, and he did 9 hours on the 6th.  My parents arrived early afternoon on the 6th and got to work before Steve came home.  Once Steve came home, he took over the pole saw while my dad prepared the chainsaw to cut down a dead tree in the back yard.  The tree had 2 trunks not a whole lot of space to fall down. My dad (who is an engineer) knew which direction to make the cuts to cut the trees down.  They didn't fall exactly where he had planned, but it worked.  Mom and I watched with our hands over our eyes as we were predicting all that could go wrong.  But luckily, things went smoothly.  The tree got cut down and hauled to the debris pile out front.

We (by we, my parents and Steve) would only work a few hours outside at a time.  We worked a few hours Friday late afternoon and then a few hours Saturday morning.  My parents were the first to wake up on Saturday and went out to work without letting us know.  Did I tell you how AWESOME my parents are?  We all went outside soon after they did and got busy.

We weren't sure if there were restrictions to the city clean-up, but figured we might as well put it all out there and then we'd take care of whatever they didn't take.  This morning, as Steve was getting ready for work, I heard a truck outside.  I got up and called Steve over to the window where we watched the cleanup.  A dump truck and a backhoe showed up and went to work.  The dump truck driver parked the truck in our driveway and then he went and dragged the limbs and such into the road where the backhoe picked the stuff up, drove to the dump truck, and dumped it in.  Our pile filled up an entire dump truck!  As soon as they were done with our pile, an empty dump truck showed up and the full one went on it's way.  Thanks City of Lima for taking care of our debris (Steve thought it was pretty cool we got a bunch of trees trimmed and hauled away for free, but then I reminded him it wasn't free, it's what our taxes went towards -- ha!). 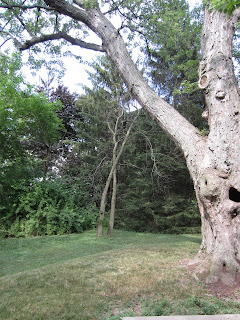 (The 2 trees in the background have been dead since we moved here.  We have a couple more trees that are dead, but this is the only one that is in a safe enough area to be chopped down by ourselves.  My dad mastered the chainsaw and took them down.) 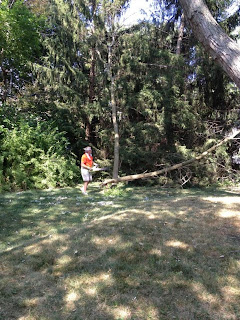 (First tree fell a little more to the left than planned, but it worked.  When he cut the second part, it fell straight into the evergreen trees.  He had to make a few more cuts, and then he and Steve were able to pull it away from the evergreen trees without harming them.  Whew.  Thanks dad!) 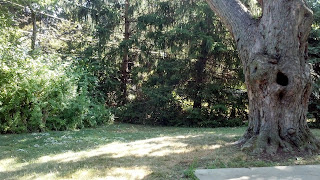 (No more tree(s)!!  The stumps are still there, but we'll deal with that at another time.  Next on the backyard list is trimming all those bushes -- which are thorn bushes-- as well as clean up around the garage.  We predict the backyard will gain almost another 1/3 of the area once the weeds and such are cleaned out.  We plan on focusing on that in the fall when everything is dead and comes out easy.) 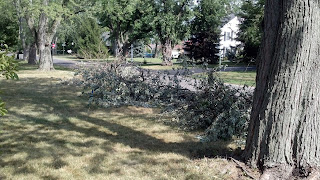 (Debris pile in the front.  Most of the limbs were from Steve trimming the trees with a pole saw.  Then we had a couple limbs fall from the storm.  My mom also went crazy raking all the small twigs from around the entire yard.  All we knew was to put "storm debris" on the curb and the city would take care of it.  We weren't sure if it was supposed to be chopped up, tied together, so we just threw it all out.  Our pile was the biggest on the street.  There were just a couple of neighbors who had small piles.) 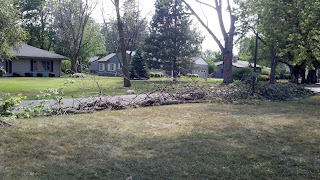 (The pile grew after we added the chopped down trees.) 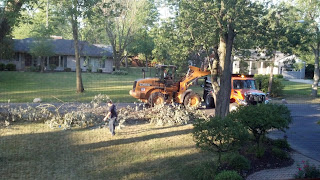 (Backhoe dropping limbs into the dump truck.  Steve was a creeper and would place the camera so that they couldn't see him watching through the window.  The guy in the lawn was the dump truck driver.  He pulled the stuff towards the road so the back hoe didn't have to go into the yard.) 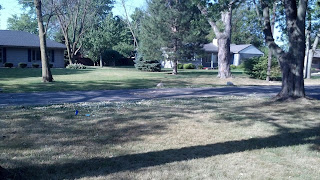 (The pile is all gone!!  They did a really good job and I don't think they damaged the yard at all -- which wouldn't be a big lost seeing as how the rest of the yard is dead.  We will just have to rake the edge and can put the stuff in our yard waste container for next week's trash pickup.)