When my parents came up to help for the weekend, they brought along a straggler -- my eldest niece Emily (almost 9 years old)! They left her behind, giving her time for her special visit.  It was a sort of last minute plan, but we made the best of the time with lots of aunt-niece bonding. 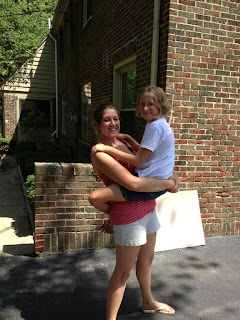 (While surveying the outdoor work with my mom, Emily came outside without shoes on and couldn't make it back to the door on the hot black asphalt.  I obligingly carried her to the door -- this won't be able to happen too much longer!)

She played a little bit on the slip-n-slide; although the ground was a little hard and the grass was pokey making it hard to actual slide.  She also helped with some outside work like pulling weeds and watering plants while the adults worked on the various yard work.  Once my parents left, we pulled out Lego Harry Potter on the Xbox, which we played tons of!  She has the game on her DS so she knew the basics.  We got to work together as a team and made through almost 10 levels in 3 days! 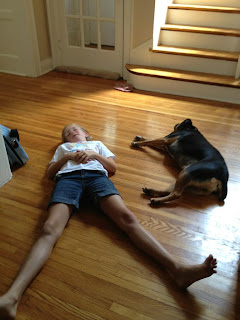 (When my parents were here to work, Emily got a little bored with all the "grown-up" talk as she deemed it.  So she decided to nap with Reese.)

When we weren't playing video games, we were working on crafts.  We went shopping where I bough her a sock monkey kit and a bird house to paint.  She had some money of her own which she spent on a baby Fijit.  The best way to describe it was as a modern-day Ferbie.  She and I both thought that the sock monkey kit would include the doll already sewn together and you just had to stuff.  OOhhhhhh was I wrong. The kit included 2 socks and some various trimmings.  We (well I) spent 3 hours sewing that *special* monkey together.  I did make her stuff the limbs and body while I did all the sewing both with a machine and by hand.  She made some design changes which made my job a little easier. 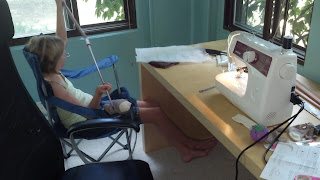 (Working on the sock monkey she affectionately named "Socky".  I made her do the stuffing part while I was working on making all the different limbs and attaching them to the body.  She got bored with stuffing the tail -- it was very long and required lots of stuffing.  She was a trooper --which is a good thing -- otherwise, she wouldn't have a new sock monkey.)

Steve and I got the pleasure of introducing Emily to Jumanji.  She had never heard of it and was skeptical of there being both a movie and game of the same name.  We started her out first with the movie, which she immediately fell in love with.  We managed to watch it 2 times.  We also spent an evening playing 3 different rounds of the board game (the game was a Goodwill find for $2 that we found awhile back).  Emily especially liked the fact that the card riddles from the game matched the riddles from the movie.

We also introduced her to the simple life of 6 tv channels -- 2 of which played some educational shows.  She fell in love with Wild Kratts (animal show with live people and animation) and Hey Kids Let's Cook.  On the cooking show, we watched how to make Jajik -- a cucumber yogurt salad.  She thought the recipe looked good (especially the fresh mint) and asked if I had the ingredients.  I had the yogurt, garlic, and salt, but we needed the cucumber and mint.  We got these ingredients while on our shopping trip and made the Jajik to go with dinner.  We both thought the recipe was a success! 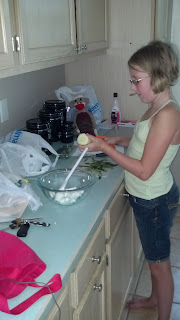 (Emily peeled the cucumber, used the garlic press, measured the ingredients, and did all the mixing.  The only part I did was dice the cucumber up.  Good job Emily!  If you're interested, you can get the recipe here.) 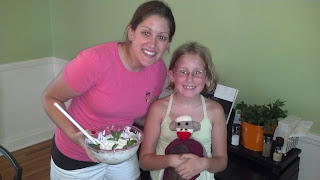 (Our spoils from our day, a new sock monkey with its own blanket, and Jajik!  During dinner, Em was so cute.  She would made a place setting for Socky and would put food down for him to eat.  She would sneak the food and pretend that Socky would eat it.  I got a very heartfelt "I have had a really good special visit with you."  Me too Em <3 )

It's so crazy for me to see how much she has grown and changed.  She is becoming quite the little lady.  I still remember her as the little toddler that would run around and play chase, blocks, and dolls with me.  It was hard to interact with her as a little adult.  Growing old is so crazy!
Posted by Unknown at 1:00 PM