I have been to New Jersey with Steve several times now to visit with his family at his grandparents' house, but it has never worked out to go in the summer.  This apparently is the year for us to travel, and we somehow managed to squeeze in a weekend at the Jersey Shore.  We were able to meet up with his parents, siblings, and even aunts and uncles for a delightful trip!

We had to leave our house at 4:30am on Friday to drive 2 hours to Detroit to catch our flight straight into Atlantic City.  Unfortunately, our plane was delayed a couple of hours which wasted our time both to be asleep and with his family.  Once the flight finally took off, the travel went smoothly and before we knew it, we were being picked up by his grandparents at the airport.  We got to visit with them a little bit before eating lunch, changing, and heading out to meet his family on the beach.  They had already been at the beach for a few hours, but stayed a couple more hours so that we could soak up the sun and ocean, too.

Upon beach arrival, we immediately headed out into the ocean to hang out with the siblings and play in the waves.  I haven't been to an ocean since I was in middle school (well, I went to the ocean in high school during December and didn't get in) and I don't think I had ever jumped in the deep waves before this trip.  It took me a little bit to adjust and figure out when to jump and how not to drown.  I was a little scared of getting my eyes wet (which I had gotten the clear earlier in the week from the eye doctor that my eyes are "healed") and trying not to lose my bathing suit which made for some stressful circumstances in the waves.  After being tossed and pulled under a few too many times, I finally called it quits and headed up to the sand to hangout out.  Steve stayed in the waves a little longer and even attempted to master the boogie-board (noticed I said attempted to, and not that he had mastered it. . . ).  After a couple hours of beach play we headed back to his grandparents where we just enjoyed being with family.

Friday afternoon, one of Steve's uncles and his two boys came to visit.  We ended up going to the boardwalk with his uncle and immediate family where we enjoyed the traditional Manco & Manco pizza (formerly known as Mack & Manco's).  After dinner, we strolled around the boardwalk before stopping to play some miniature golf.  We had a good time playing golf and Steve & I somehow ended up tying for 3rd place (even though I still say Scott rigged his 1st place slot).  Before we headed back to his grandparents' house, Steve finally got his long awaited funnel cake. 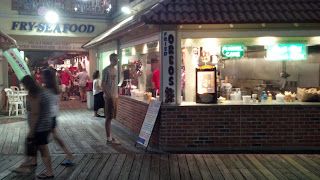 (Steve anxiously awaiting his funnel cake.  He had been waiting all summer to get a funnel cake from a local fair, but it never worked out to go to any of the fairs.  When I reminded him that the Jersey trip was around the corner, he remembered the boardwalk and funnel cake and he was like a kid waiting for Christmas.) 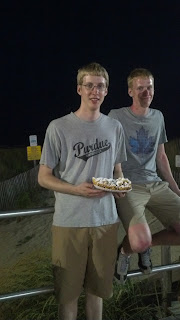 (Steve humoring me with a picture of his funnel cake along with his brother Ian.)

Saturday was filled with more beach time and more visiting with family.  Steve's siblings were burnt from the previous day's sun.  Ian decided to stay back with his grandparents while Scott & Ash braved the beach and just stayed under the umbrella.  There wasn't much wave action fought by the family.  I think everyone just mainly stayed on the sand and enjoyed each other's company.  I mainly laid in the sun and would dip in the ocean every once in a while to cool off.  We all enjoyed watching Steve's uncle and cousin attempt to build a castle and play in the waves. 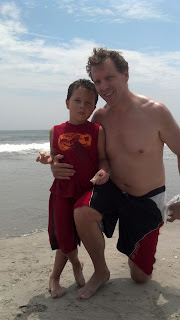 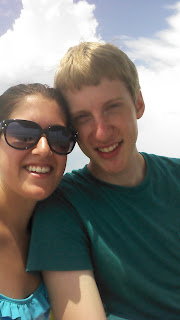 (Us enjoying the sunshine and break away from Lima.) (The group enjoying the shade cast by Doug's perfectly placed umbrellas.  We only had the blue umbrella on the first day, and decided another was needed.  Doug went all out and got one with 100 spf protection - ha!)

Saturday afternoon and evening was just spent at Nanny & Poppy's house.  Steve's other aunt, uncle, and cousins showed up bringing their dog and lots of entertainment.  It was neat to get to visit with both Sames clans.  Barry had to leave in the evening, but the rest of us caught up on life and enjoyed watching the Olympics together.

Before we knew it, it was Sunday and our last day in Jersey.  We headed to the beach yet again (after saying goodbye to Scott & Ash) with the other cousins.  We weren't there too long before it started to rain.  Steve just spent the day under the umbrella while I went in the shallower waves with his youngest cousin Ava.  We were out in the ocean when it started to rain and decided along with the family that it was time to go.  As soon as we pulled out of our parking spots, it was pouring down rain with lightening and thunder.  Whew!  We got back to the house, changed, packed, watched some more Olympics, said our goodbyes and were headed off back towards Lima. The return home was uneventful and we thoroughly enjoyed our little getaway for the weekend.  Now we have just a few days left to prepare for Europe. . .