It's hard to believe that it has been 3 weeks since we returned from Europe.  Part of me feels only a few days has passed; whereas, the other part of me feels like it was a lifetime ago.  Since returning from our trip, we've been trying to adjust back to our normal schedules, to realize that there never really was a normal.
Two days after returning, I ended up with a pretty severe sinus infection.  It left me feeling miserable and on the couch for several days.  After a doctor's trip, antibiotics, and a week to recuperate, I'm back to my normal self.  Steve has been suffering with sinus issues, but he refused to go to the med clinic where he had taken me.  Lucky for him, I made us appointments with a new doctor for this week.
Besides returning to work, Steve has been busy with projects around the house.  He has already mowed the yard 2 times, and has begun his battle with weeds.  Our yard is full of dandelions and other various weeds which will require a lot of attention this summer.  He has done his research and "Kill Weeds - phase 1" will start this week.  He also had to do some work on our red Honda.  A couple of weeks before our trip, his car suddenly died.  Luckily, the issue started as he pulled into our neighborhood after work one day, and he made it into the garage, but he couldn't get it to restart.  After research, tinkering around, and ordering a new part Steve was able to replace the ignition switch & fixed the problem!  We are now back to 2 functioning cars again.
Steve has also started lining up some more projects to be done both outside and inside the house.  He got a book about slate roofs (which he read in 2 days) and has ordered some tools for dealing with slate.  He is planning a trip to pick up some new slate tiles in Columbus in hopes of fixing the damage on the garage.  He also ordered some door bell chimes (which are huge) to be hung in our foyer.  A few months back with the help of my dad, he was able to get the original doorbell working, but there were no chimes.  They are laying on the floor now, awaiting to be hung up on the wall (after it's painted of course!).
That leads to what I've been up to -- I have gotten back into working on the house.  This past week, I took on the task of painting the downstairs half bath.  I'll have some pictures and a post about that later ;-).  I also spent a couple of days deep cleaning the sunroom.  There was a nice layer of grime on the blinds for each of the 8 windows.  I also took out each of the window sections (4 per window) and gave them a good cleaning too.  It was pretty intense work (I don't think that stuff had been cleaned in years).  Now I am trying to mentally prepare myself for the task of painting all the trim, walls, and stairs in the main entryway.
Over Easter weekend, Steve and I headed to my parents' house for the long weekend.  We went there from Thursday to Sunday and got in a lot of family time (Steve also got to help my dad and brother-in-law save the world several times -- playing Starcraft).  This past weekend, I returned back to my parents' house alone for the weekend.  I was able to surprise Mrs. B (I subbed for her in Oct last year) by visiting her class for the afternoon.  I was able to share with her about our trip and help her plan for her June trip to Italy.  I also got to go with my sister and nieces to Purdue's Spring Fest, visit another niece's 1st birthday party, and go to a baby shower for an old friend.  I am truly blessed that Steve is so willing to share me with others for the weekend :-).
Here are some pictures from Spring Fest (note -- everything we did was free!): 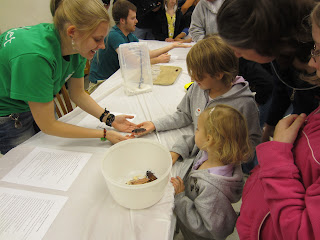 (Our first stop was at the Bugbowl!  The girls all got to hold a tobacco worm, Madagascar Hissing Cockroach (pictured), pet a millipede & pet a tarantula.  Gabbie (the youngest) was terrified of the man in the bee costume because she thought she'd get stung, but held and pet all the bugs.) 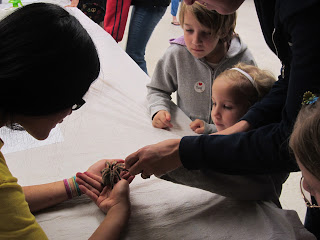 (Amber had to help Gabbie pet the tarantula because she was afraid Gabbie would panic last second.) 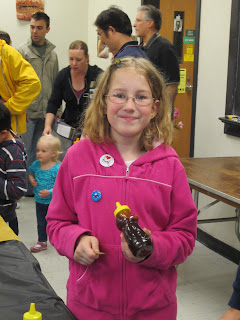 (Emily enjoying the honey tasting portion of the bug building.) 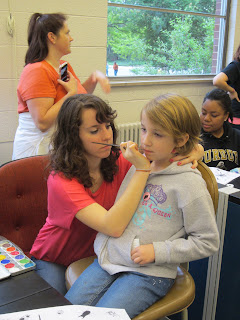 (Allie getting her face painted.) 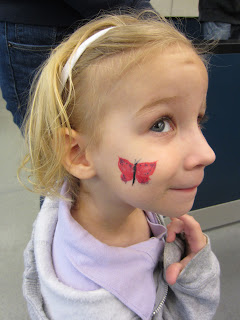 (Gabbie showing off her butterfly.) 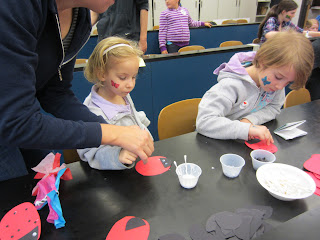 (There was a craft and face painting room in the Bugbowl building that the girls couldn't get enough of.  They made butterflies, lady bugs, catepillars, and bug bookmarks.  They all got their faces and an arm painted between doing the crafts.  We visited this room in the morning and returned in the afternoon to get all the things accomplished.) 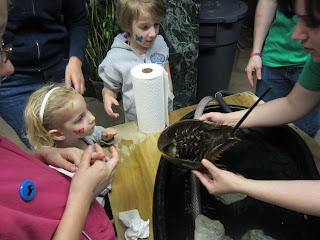 (After the Bugbowl building, we headed to another building where the girls got to hold sea urchins, hermit crabs (Gabbie panicked as the crab was put into her hand and she gracefully dropped it back into the water), and a horseshoe crab (pictured).  The horseshoe crab is dated back from the dinosaurs and the girls thought it was pretty cool.  They each got to feel the hard shell on the top, identify the eyes, and even hold the crab.) 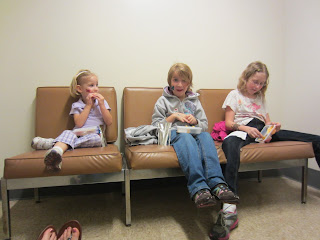 (While in the Bugbowl building, it began to rain pretty heavy and the rain didn't stop the rest of the day.  At times it would be lighter, but we tried to stay in buildings during the heavy rain.  Amber had packed us all lunchables and we ate them in a sitting area in a bathroom.  Emily (the oldest) was afraid we'd get in trouble for eating in there, but it worked out perfectly -- a nice quiet, dry spot!) 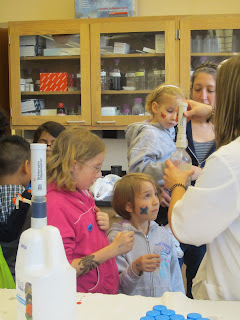 (After lunch, we headed to another building where the girls got to do all sorts of science activities.  They made UV bracelets, snow, "lava lamps", and played with polymer worms.  They also got to watch a demonstration on how to make elephant toothpaste (a scientist poured different ingredients in a tube and a huge cloud of puff came out).) 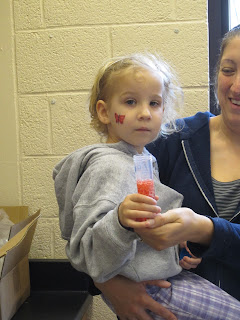 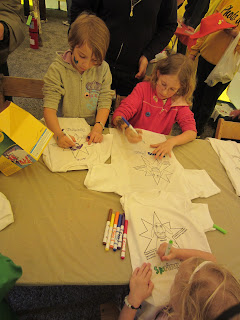 (Next, we had to walk through the rain to a little economics tent.  The girls had to go to different stations and would get tickets by completing the activities.  They were matching cereal brands to their mascots, weigh purchasing options, figuring out the difference between human, capital, and natural resources, and using different tools to mine materials -- there were beads mixed up in a box and you had to use different tools for certain colors.  After you got all the tickets, you cashed them in to color your own t-shirts!  Some of the activities were too advanced for the kids, but Amber and I were able to complete the activities and earn the tickets for the girls.) 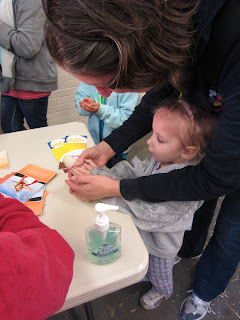 (After the economics tent, we trekked through the rain to the "petting zoo".  The girls got to pet a horse, goat, alpacas, pigs, bunnies, and hold baby chicks & ducks.  Amber had to help Gabbie hold the chick.) 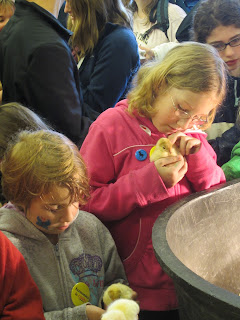 (Emily & Allie both holding baby ducks.  Each girl got to hold a baby chick & a baby duck.  They had been looking forward to this all day!) 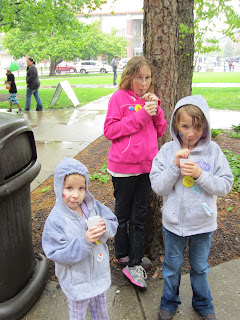 (After the petting zoo, we headed back up to the main area where the girls got to make their own root beer.  It was located in a tent -- they had a container of soda water & a container of syrup.  You got to make your own mix and enjoy it for free!)
Posted by Unknown at 7:16 PM