Today was supposed to be our Vespa tour of Barcelona.  However, there was an 80% chance of rain.  Our reservation was at 10 o'clock.  We decided to go there & evaluate the weather at that point.  While Steve was showering & getting ready, I was busy ironing some of the clothes to help finish the drying process.  Finally, I had some clean warmer layers to wear!

We headed to the Vespa tour location via the metro.  On the way, it was a little chilly, but we didn't want to make a decision until we were closer.  We stepped back onto the street form the metro & began walking toward the Vespa tour.  Before we got there, we already knew it would be a miserable day if we decided to go on the Vespa.  It was already sprinkling & pretty chilly.  We had already put $20 towards a reservation, but knew the other $40 wasn't worth it.

Luckily, the Vespa place was located near one of our sites -- La Sagrada Familia by Antoni Gaudi.  So we started our day off there.  This church has been in the works since 1886 & still isn't completed!  The goal is to be done by 2026, but it is unlikely.  Only last year was it finally dedicated as a basilica by the pope.  We were almost done at the church when we realized it was raining pretty good (guess skipping the Vespas was a good idea!).  We waited out the rain & planned the next part of our day. 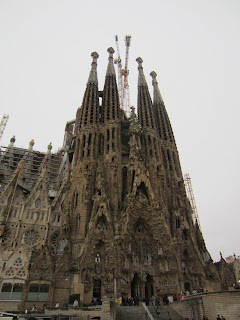 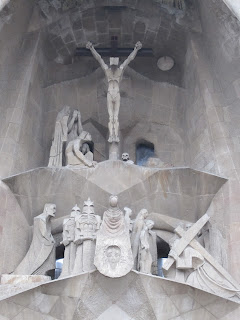 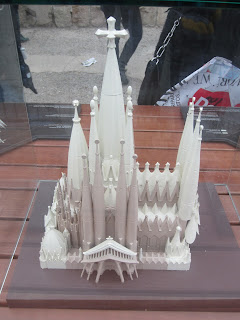 (Here is the model of what the completed church will look like.  The cross atop the center spire will be so tall that ships coming into Barcelona in the Mediterranean Sea will be able to see it.) 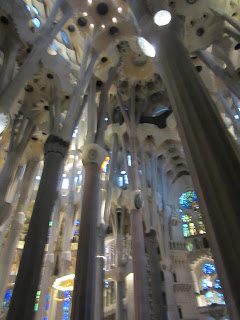 (Inside the church -- it is surrounded by pillars that give the appearance of trees.  Gaudi (the archietect who was commissioned to construct the church) was known for his ties with nature.  He incorporated nature into lots of his architecture seen all throughout Barcelona.) 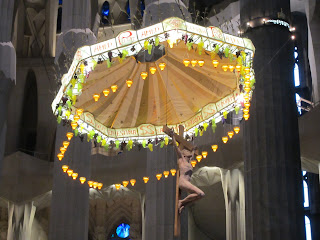 (This is suspended from the air over the main alter.) 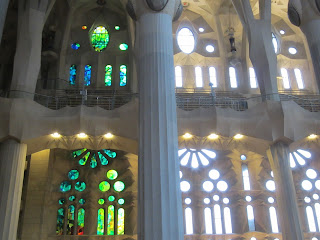 (The church is still under construction.  They get their money from donations and ticket sales into the church.  Here you can see that not all of the windows have stained glass yet.  They replace the windows as the budget allows.)
From the church, we hopped back onto the metro and went to the Cathedral of Barcelona.  We had to walk through some drizzle, but it wasn't that bad.  While inside the Cathedral, the rain picked up.  We had to dodge around some school groups, but were able to find a seat & wait the rain out.  We especially enjoyed the geese in the church's cloister. 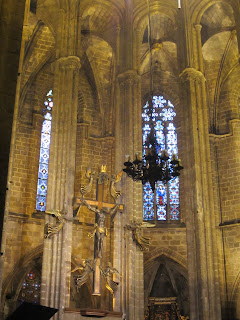 (The inside of the Barcelona Cathedral reminded us of yesterday's Santa Maria del Mar.) 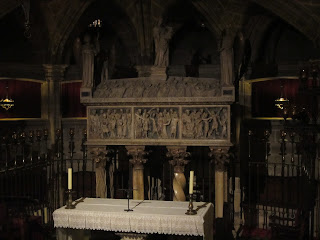 (Under the main alter is a tomb of Eulalia.  Eulalia was a Christian martyr during Roman rule in Barcelona's beginnings.  She was 13 years old and had to endure 13 different punishments (each punishment was meant to kill her, but she wouldn't die).  Finally, they crucified her on an x-shaped cross, which is the symbol found throughout the Cathedral.) 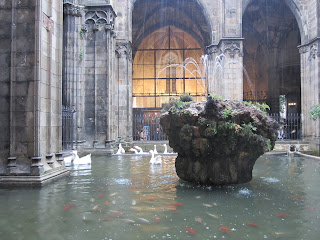 (In the Cathedral's cloisture -- covered & open garden area -- are 13 geese (one for each year and punishment in Eulalia's life).  The geese were pretty funny to watch.  They'd just stare at you and cock their heads to the side.) 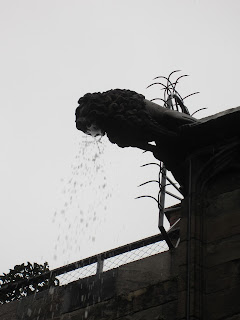 ('The gargoyle's served double duty -- architectural art & rain gutters!)
From the cathedral, we ha d a short walk to the City History Museum.  Inside, you go down 65 feet into a "subsoil archaeological site", where you get to see some Roman ruins.  We did not find the info & "recreation scenes" helpful but got some info from the English audio-guides. 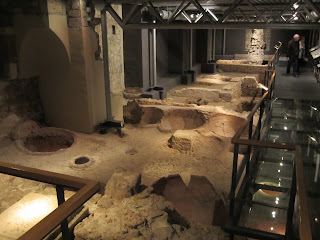 (View of the archaeological subsoil area.  This was a community area that was unearthed.  There were different sections like laundry area, fishery, & a winery.  They had little plaques that tried to show what you were looking at, but it wasn't done well and we couldn't really "see" the sites.  It was neat, but not a must-see.) 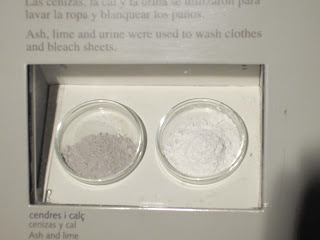 (This was one of Steve's favorite plaques in the "laundry" room.  He got a kick out of the fact that they mixed in urine with ash, lime, and bleach in order to wash their laundry.)
After the museum, I was pretty hungry.  Our "brought" food supplies (granola bars & trail mix) are running low & Barcelona doesn't have the quick-stop food places like Rome.  After searching around, we decided to metro back to our "burrow" & see what we could find.  We didn't find anything cheap or quick, so I decided to stop at a little supermarket & make our own meal.  For 6.4 euro we bought: chocolate flakes cereal, package of noodles, 3 small tomatoes, 1 onion, 1 head garlic, 2 cans Fanta & 2 cans coke.

When we got back to the apartment, we couldn't figure out the stove.  We knew it was gas, but the burner wouldn't light.  Steve emailed our host while I did another load of laundry.  She explained via email you have to start the burner with matches.  This was new to me, but camper/pyro Steve got the stove working.  30 minutes later, we had another load of clean laundry air drying & food to eat. 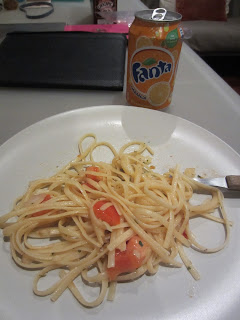 (I boiled the noodles in water with cayenne seeds that I found in the cabinet.  Then I sauted onions & garlic and added it into the noodles along with diced tomatoes & random seasons form the cabinet.  I think they may have been parsley & rosemary according to the pictures.)
After we ate, I had to iron/dry up some more clothes.  Then we layered up and headed back out.  We metroed to a new location and visited Casa Mila/ La Pedrera-- another one of Gaudi's works.  We got to tour the rooftop, attic, and an apartment in the building.  We bought 1 audio guide & shared it via our own set of headphones & "Y" audio splitter. 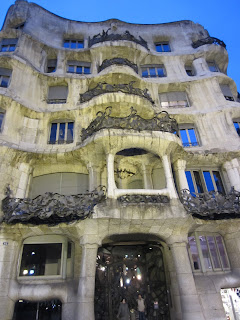 (View of Le Pedrera from the street) 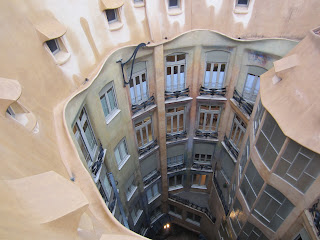 (View down the center of the building from the roof top) 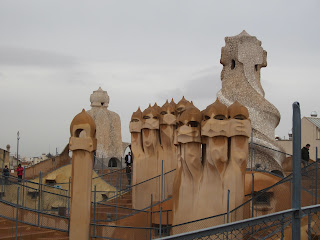 (Chimneys up on the rooftop) 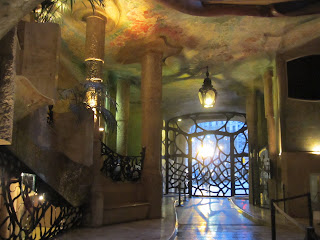 (Inner foyer of the apartment complex.  The building is now considered a world heritage site and no one lives inside it any more.)
When we were done, the rain had stopped, wind had died down, and it seemed warmer.  We decided to go on Rick Steves's "Block of Discord" walking tour.  The block holds 3 buildings of famous architects (one being Gaudi).  People say that each architect tried to outdo each other, creating a discord amongst the block. 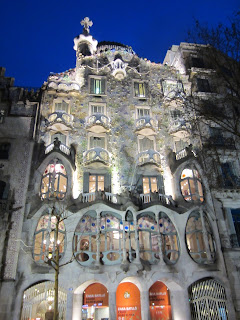 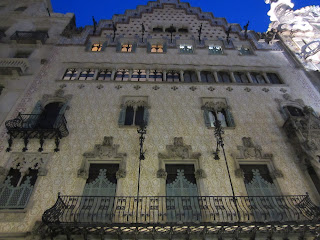 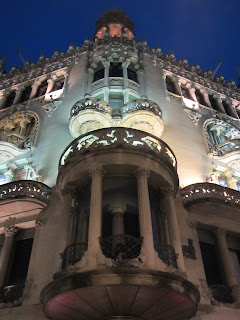 (Lluis Domenech i Montaner's Casa Lleo-Morera)
From the discorded block, we continued heading south towards Placa Catalyuna.  From there, we did Rick Steves's La Ramblas walking tour.  This area is very touristy & offers "street" entertainment, food market (La Boqueria), and American amenities (like McDonald's, Burger King, KFC, Hard Rock Cafe, Starbucks).  By the time we walked this street, it was getting late (past 8 o'clock).  We were supposed to be able to see the Mediterranean Sea at the end of La Ramblas, but it was too dark. 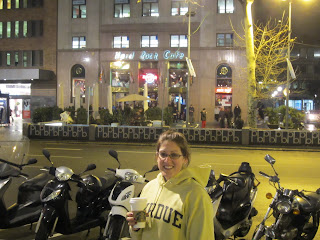 (Steve granted me a coffee from Starbucks for being a trooper throughout the rainy weather.  Behind me is the Hard Rock Cafe -- which my dad had found on a previous trip to Barcelona.) 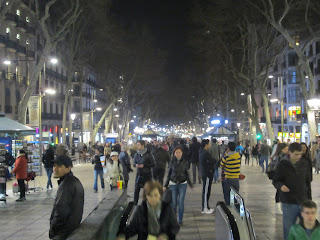 (A picture of the touristy pedestrian area -- La Ramblas) 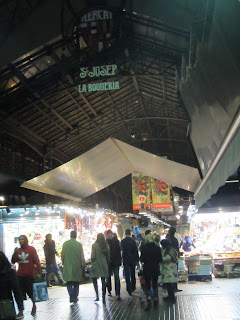 (In the middle of La Ramblas is a La Boqueria market.  During the day, this area is bustling with people buying and selling meat, fish, fresh produce, and candies.  We were too late in the day and didn't see much going on.)
We hopped on the metro and navigated back to our apartment.  We are getting good with navigating the metro!  Once home, Steve planned our next day along with some tablet games while I worked on more laundry.  Because of the rainy weather, stuff isn't drying all the way.  Even after using the iron, things still feel damp.  I completed our last load (3 loads total).  One load has been line dried, iron dried, and folded.  The other 2 are strewn about the apartment in various areas "line" drying. 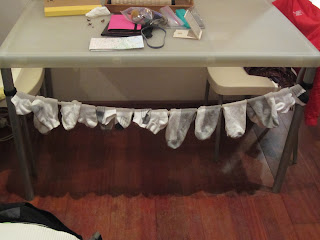 (Even though we're on vacation, I truly enjoyed getting to do some laundry & cooking!)
I went to bed with the plan to get up early and do more ironing/drying.  Everything has to be dried and packed by tomorrow night since we leave for Madrid the next day!
Posted by Unknown at 9:47 AM