**Originally, we were to take a bus to Montserrat for the day.  However, there was rain in the day's forecast.  After searching online about Montserrat, people said it wasn't worth visiting the monastery on cloudy days, because you couldn't see good views.  Therefore, we decided to make the day easy and do a tourist bus.  The tourist bust would allow us to see major sites we hadn't planned on as well as protect us from the weather.**

I woke up around 8:30 and went back to ironing.  I had a lot of damp clothes that needed to be in suitcases by the next morning.  I ironed quietly while Steve slept in (we had stayed up late the night before because I was busy ironing, journaling, and using the internet), especially since it was pouring rain outside.  By the time he was up and showered, I was at a stopping point. We left the apartment around 11 (drizzle outside) and headed to the metro.  We took the metro from our stop at San Antoni to the main train/bus station.  We wanted to check the station out and get our tickets for tomorrow's train ride to Madrid (we had purchased them online and printed off a sheet, but was unsure if the sheet was a voucher or the actual tickets).

After finding out our print out serves as the tickets (I'm still a little skeptical, but we'll see), we got a pastry and then went in search of the tourist bus bust stop.  After spotting a bus a following it around the station, we found the stop.  Later, we discovered there are 2 competing tourist buses (we found this out by trying to get on the wrong bus).  There was the blue Turistic bus & red Barcelona City Tour.  We were on the red bus.  The tour had 2 routes -- orange & green.  Our tickets (24 euro each, bought on the bus) were valid for the entire day.  You could get on & off at any stop on either route in order to visit places.  While on the bus, they had an included audio tour to listen to (earphones included!).

We started on the orange route at stop 12.  (18 orange stops, 17 green).  We rode until stop 2 & got off at Placa Catalyunya where we started the Rick Steves's Barri Gothic walking tour.  When we had started the bus tour, it was drizzling a little as well as overcast. Halfway on the walking tour, the sun came out!  Even though we had visited the Barcelona Cathedral the previous day, we didn't vie it from the outside.  Along the walking tour, we got to see the front side of the Cathedral.  There was a little flea market set up outside that we strolled through.  In a little shoe box was a bunch of different crystal chandelier pieces that matched the style of our chandeliers at home.  I wanted to replace a little pendant from the living room chandelier and bought a new pendant for 2 euro at the flea market. 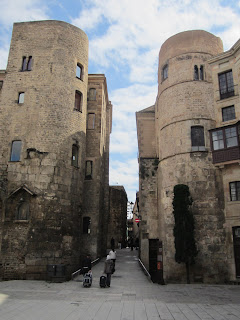 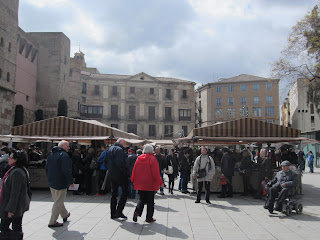 (Little flea market in front of the Cathedral of Barcelona) 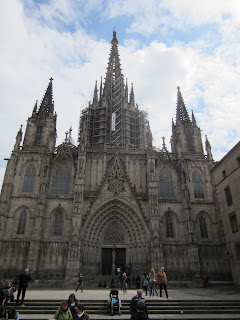 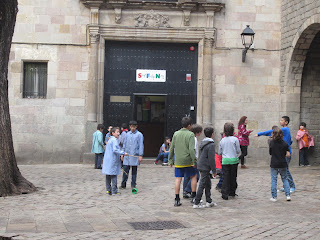 (Along the Rick Steves tour, he had you pass through a little courtyard that serves as a playground on weekdays.  Here is a picture of the school and the kids playing games like tag, juggling, and ball.)
After finishing up the walking tour, we stopped at a Pans & Co (a food chain known for their baguette style sandwiches in Spain) and split a sandwich.  We then back tracked to Placa Catalyuna and revisited La Ramblas.  We wanted to see La Boqueria (market) while it was day.  While in the market, we bought a little fruit drink.  We then walked to the Mediterranean Sea port & caught the bust at stop 3 (this is where we tried to get on the wrong tour bus, oops). 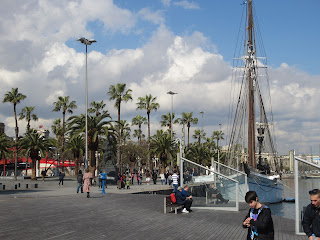 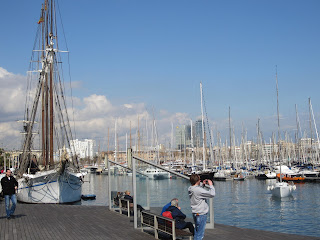 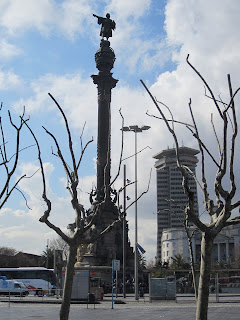 (Christopher Columbus Monument)
We took the orange route all the way to stop #1 (overlapping several stops we'd already seen) in order to switch to green.  We rode the green route to #13 (we missed #14, but 15-17 were duplicates of orange stops) where we got off & walked to Parc Guell.  This park was created by Antoni Gaudi.  He intended the park to be a gated community; however, he was ahead of his time and the idea failed.  This trip has irritated one of my knees & it flared up on the walk to the park.  It also didn't help that we had been sitting on the top of the buses all day (except for the overlapping stops) where it was windy & chilly when the sun wasn't out.  It was 6:45 pm by the time we got to the park.  We were cold and tired; so we back-tracked to a metro stop & went home. 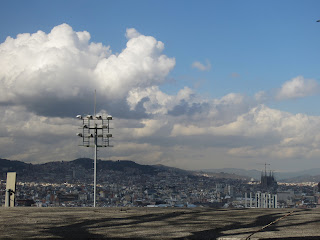 (View from the bus.  Notice-- right side of the skyline, La Sagrada Familia towers around the surrounding buildings.  It'll be crazy to see it when they add the central spire, which will be 560 ft in height!) 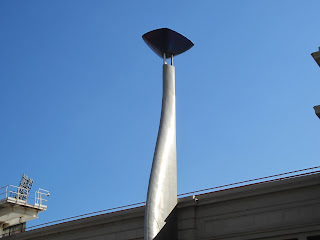 (Olympic Flame from the 1992 Summer games hosted by Barcelona) 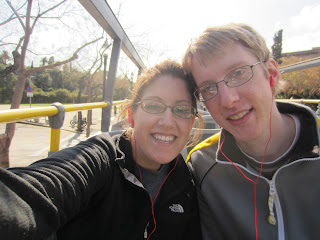 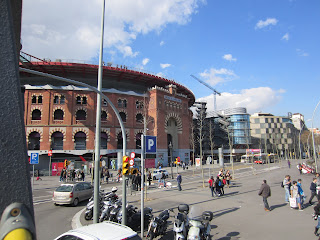 (Barcelona's Bull Fight Arena -- bull fighting was banned in Barcelona in 2010 and the arena is now home to a shopping center.) 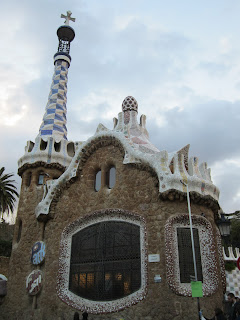 (Security tower to the entrance of Parc Guell) 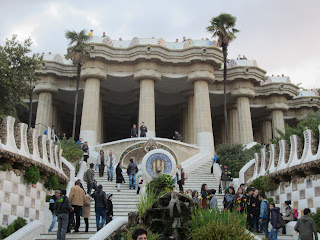 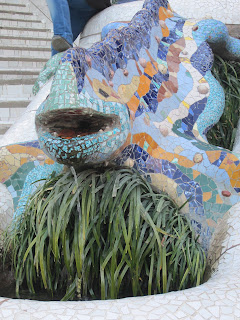 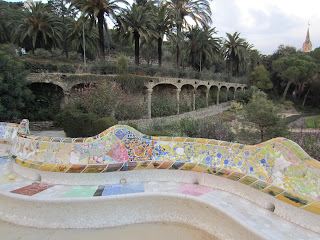 (At the top of the park entrance, Gaudi had a bench surrounding an open area.  From here, you could see views of Barcelona as well as the paths that you can take throughout the park.)
We stopped & got Beef Empanades right outside our apartment.  We ate them at the apartment along with the leftovers from the dinner I made yesterday and our last Fanta & Coke.  After dinner, Steve planned Madrid while I ironed, packed, & cleaned up. 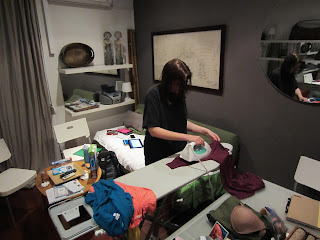 (I got to do lots of chores while staying in Barcelona -- cooking, washing clothes, ironing.  I must say, it was kind of relaxing to have these ties to home!)
Posted by Unknown at 8:54 AM