This morning marked our departure for Madrid.  I was up again before Steve, getting ready & finishing packing.  We left for the metro at 9:30.  This ride concluded our second T-10 ticket (meaning we used 20 rides between the two of us in Barcelona).  We got to the train station in plenty of time to get breakfast at McDonalds.  I got an egg McMuffin while Steve got hotcakes.  Only, he had issues ordering and got 2 orders of hotcakes with sugar.  He had asked for syrup, but I guess that idea was foreign to them.

We finished eating & headed to our platform.  We had to go through security (just bags, not us).  A line was forming at our platform, so we joined it.  We got onto the train without a problem & finally had seats next to each other.  The ride was fine (2.45 hr), except for the seat in front of us.  Throughout the ride, their entire bench would rotate towards the window and into our leg area.  I finally pinned my foot against the seat to keep the little girl in front from moving it.  At the end, someone finally locked it into place.

We got off the train and searched for a phone to call our 3rd & final apartment host!  We found a phone near the metro entrance & began the phone calling process.  This one required 1 euro minimum.  We loaded it with change & dialed.  Enrique picked up but before he & Steve set the plan, the phone died (usually they count down, but this one didn't).  We loaded up more coins & completed the call.  When Steve hung up, some of the coins returned.  We bought a T-10 ticket for Madrid & got on the metro.  It was ridiculous having to carry our suitcases up & down all the stairs.  We had to change trams once.  Wen we did, the 2nd tram was packed!  We had to stack our suitcases on top of each other just to get on.

We had trouble orienting ourselves (yet again) with the map once we got off the metro.  We knew 1 road, but the intersection ones weren't labeled well on the map.  We finally found the one that was close to the apartment & asked someone to point us in the right direction.  We found the door to the complex, but saw no Enrique.  We didn't know the apartment # to ring him.  After 10 min, I stayed with the suitcases while Steve went to find a phone.  He returned shortly, but couldn't find a phone that worked.  Just about the time that Steve returned, a lady came towards the apartment and was entering the complex.  I stopped her and asked if she knew Enrique.  She told us he lived in #1A & buzzed him for us.  Steve talked to him via the intercom, and Enrique let us up!

After Enrique showed us the apartment & made recommendations, we immediately headed out on a Rick Steves tour that ended at the Royal Palace.  It was going on 4 o'clock & the last entry to the palace was at 5. We started the tour, which went through a couple plazas -- full of peddlers, street acts, & people dressed in costumes (like spongebob, mickey, minnie, dora, etc).  We were hungry & realized we needed to hurry & get to the palace.  We decided to grab food at Pans & Co & skip ahead on the tour to the palace.  We got there around 4:50 & they let us in.  There were 3 areas to tour -- 30ish rooms in the palace, the pharmacy in the courtyard & the armory in the courtyard.  We made it through the main area in an hour & htought we had 15 min to tour the other 2 locations.  However, as we started in the direction of the armory, a guard explained it was closed.  So we went & got our bag & left. 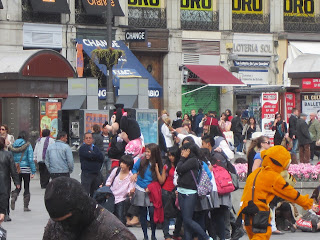 (Seedy characters and peddlers in the plaza areas.  You can see Mickey & Minnie left of center.  Tigger in the bottom right, and in the bottom left, you can see a Ninja.) 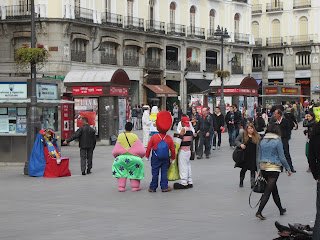 (The characters were notorious for smoke breaks.  They would have their costumes hanging off, heads beside them, and smoking.  These characters are definitely not Disney World approved.) 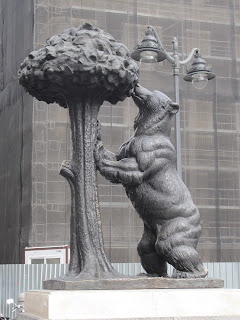 (This symbol is seen throughout Madrid) 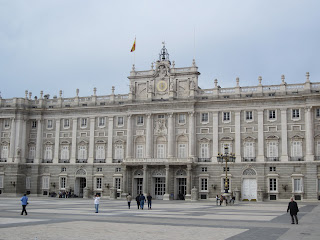 (The Royal Palace.  Sadly, we were not allowed to take pictures on the inside.) 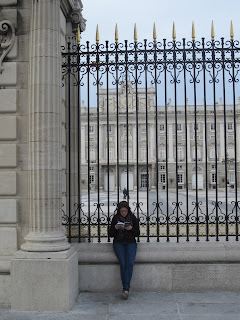 (I was trying to figure out how to do the walking tour from our location back to the starting point.  However, Rick Steves tends to be really wordy and describes directions via things you see, so we couldn't back track & tour at the same time.)
We attempted to do the Rick Steves tour backwards to where we had diverted, but it was hard to invert some of the direction.  We did hit all the main stops (like City Hall).  We backtracked to Plaza Mayor where we had began the tour.  There were still peddlers and a magic trick going on.

We headed back to our apartment, passing by a big Dia Supermarket.  We decided to check it out. It was like the Ikea of food stores!  Upon entering, you headed up an escalator to the top floor.  You pick up this little pull cart/basket & chose the times you wanted (upstairs: frozen foods, drinks, cookies, healthcare, baby products,  paper goods, pasta, etc).  The you take normal stairs (carrying your cart/basket) down.  (downstairs: meat/veggies/breads/cereals).  We waited in line & checked out.  For 7 euro we got -- 3 cokes, 3 fanta, box cereal, box ice cream sandwiches, & a twinkie).  You have to pay .05 euro for a bag, so instead, we stuffed the stuff into our backpack.  The store was pretty hopping & crazy.

We returned early (7:30ish) to our apartment & called it a night.  But first, I ate my strawberry twinkie & had a glass of Cabre & Sabate champaign (courtesy of Enrique).
Posted by Unknown at 3:27 PM