Our apartment in Madrid was our absolute favorite.  Enrique, our host, spoke very poor English (he admitted it to us), but his apartment made up for that!  It was decked out in Ikea products (of course).  It had a very open layout and was very clean.  We felt most at home in his apartment.  He had a nice heating/cooling system that was in multiple rooms, a big water heater (hot water was never an issue), electric stove, internet and television (although it was all in Spanish).  It's location was pretty good too-- about a block away from a metro stop. 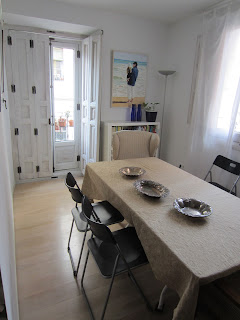 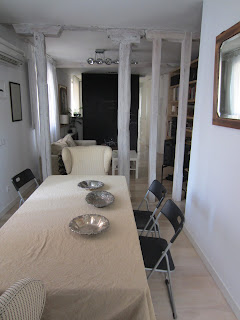 (View from the dining area into the living room.  That black wall at the far end of the living room was a chalkboard wall!  He left us a message explaining that Sunday was Europe's daylight savings jump -- they jump a couple of weeks after the US does theirs.) 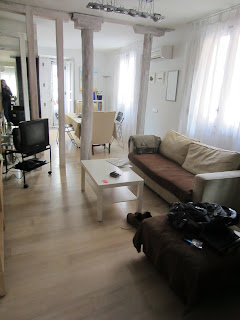 (View of the living room from the entrance.  If you were to turn right at this point, you would enter the kitchen.) 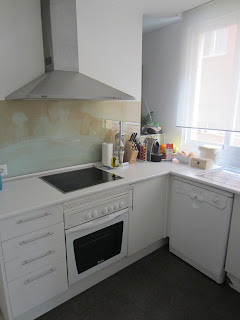 (The kitchen was very open.  It had an electric stove/oven, dishwasher, and a laundry machine.) 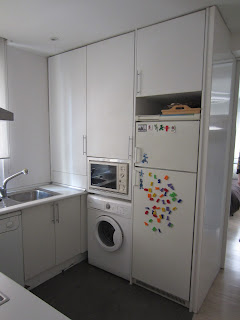 (Enrique is trying to collect magnets from all his guests.  He had asked us to bring a magnet from our hometown.  It was hard to find a magnet, but we found an Ohio State keychain that I glued a magnet piece behind.  It's the last magnet on the freezer.  He had magnets from NY, Stanford University, and some from Germany.  If you continued through the kitchen, you'd get to the bedroom.) 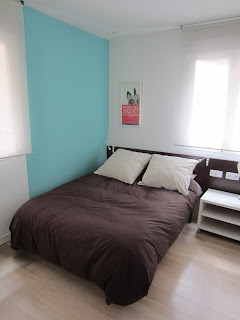 (The bed wasn't the best, but it was high off the ground-- the beds in Rome & Madrid were 6" off the ground.  It was also more worn in the middle, so Steve and I kept falling into the middle towards each other.) 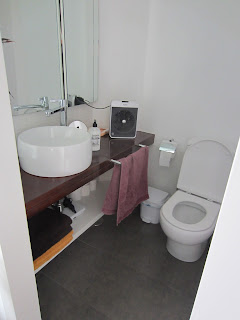 (Bathroom)
As nice as Enrique's apartment was, we were very excited to know that the next bed we would sleep in would be our own :-D!!

***Note:  We found all our accommodations from airbnb.com.  We had the apartments to ourselves, we assume our hosts either have a 2nd apartment or stayed with a friend.
Posted by Unknown at 8:35 AM