Today, we left our apartment at 8:45 & headed to the metro.  We had to change trams 1 time to get to the bus station where we caught a bus to get to Segovia.

Upon getting to Segovia, we got a map from the Tourist Information & headed in search of the Ancient Roman Aqueduct.  Segoiva is small & easily laid out, making it easy to find all the sites on our Rick Steves tour.  He pointed out some interesting architecture as well as sites to see.  Before heading into the Catehdral, we stopped at a bakery - Mentes y Limon - to get a poncho segoviano (marzipan cake, a Rick Steves recommendation).  The Cathedral was like the one we visited in Barcelona, only it was really cold inside!  Luckily, our weather was nice and sunny, and if you remained in the sun, you would get hot. 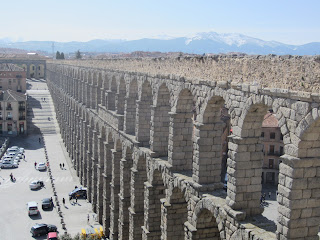 (Roman Aqueduct, where our tour for the day started.) 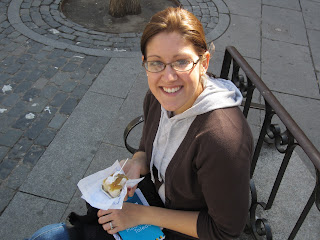 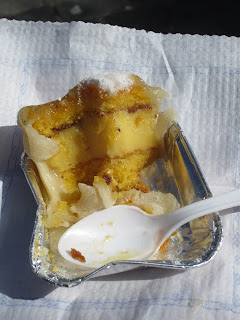 (Poncho Segoviano -- a little marzipan cake.  It was very sweet and sugary.  Steve licked it more than I did.  I didn't care for the texture on the outside, but the inside was nice and creamy.) 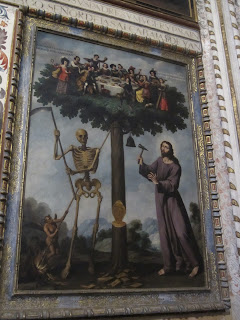 (Inside the Cathedral, there were several ornate chapels.  In one of the, there was this painting which represented death chopping down a tree (that held all life worshiping pagan gods) while Christ rang a bell to tell the people of their impending doom.) 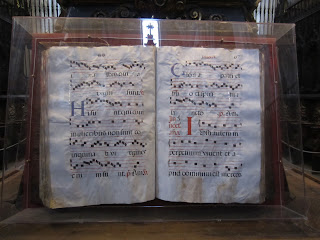 (Inside the Cathedral, there were some very interesting books that appear to be music books.)
After the Cathedral, we continued down the main street to get to Alcazar -- a castle that helped model the Disney World castle.  We got to tour around the inside & walk up a ridiculously steep spiral staircase to see Segovia via the tower.  This marked the last site in Segovia, so we headed to a restaurant in search of Cochinillo Asado -- suckling piglet.  Rick Steves recommended it at 3 places.  The first place we went to was 42 euro, so we went to find the next location.  When we got to option #2, it was closed.  We then walked back towards the castle to look at option #3, but it was 50 euro there!  So we headed back to option #1 -- Meson de Candido.  How many times can one say they've had a Segovian delicacy under an ancient Roman aqueduct in Segovia, Spain? 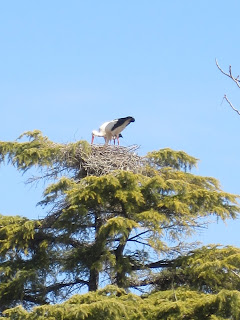 (In front of Alcazar Castle, there were trees with Stork nests in the top.  Steve was fascinated with the storks and had to take several pictures of them.) 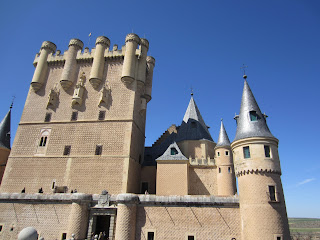 (Alcazar Castle.  The castle was ever changing from the 1100s-1500s.  Each royalty restored and rebuilt sections of it.  In 1500s, the royal court moved to Madrid and the castle became a state prison for a couple of centuries.  Then in 1762, it became a military school until a fire destroyed large portions of the castle in 1862. In 1882, it was finally restored to its original condition, giving us its modern day whimsical look (which was used as an example while designing the Disney World castle).) 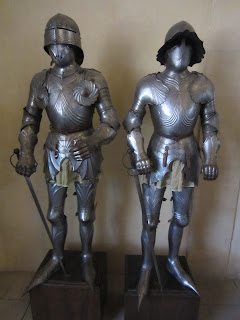 (Inside the castle, there were some suits of armor and such.  Steve got a kick out of the pointy toes.) 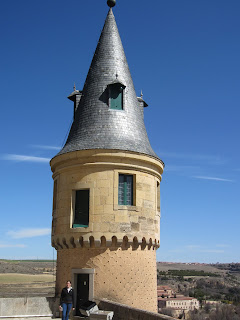 (After walking up a steep spiraling staircase, we got to the top of the castle got to see views of Segovia.) 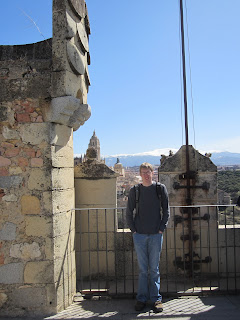 (It's hard to see, but the Cathedral of Segovia is in the background behind Steve) 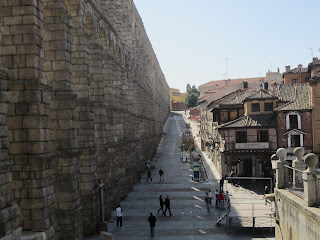 (After the castle and hunting down where we were going to eat lunch, we settled on Meson de Candido.  It is the corner building across from the aqueduct.)
Steve did all the ordering, and our waiters only spoke to us in Spanish.  We each got 1/4 of a piglet, a coke & coke light (everyone around us had coke products and I wasn't about to differ from the norm.  While in Europe, I only consumed 2 coke lights, trying to stick to my Lent commitment), and a half loaf of pretzel-like bread for 53 euro.  When Steve asked for the check, she returned with a little creamer-like cup with the restaurant's name on it.  Steve thought she said it was a gift & since nothing else made since, we took it as a souvenir (no one came rushing out after us, so I assume that was the intent behind it). 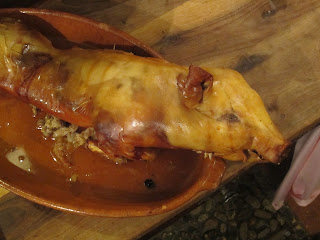 (How the pig was brought out to us.  They placed it on a side serving table where the waiter cut the head off & then split the rest in half, giving us each a quarter of the piglet.) 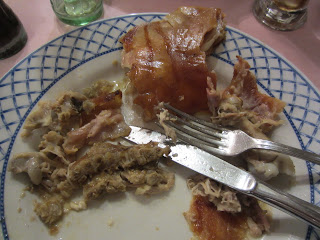 (This is the remnants of Steve's plate.  He ate the back half, containing the spine (left) and hind leg (under the fork).  I had the rib section and shoulder blade.  I am not one who likes to see my food in its original form.  I didn't see the piglet until after I ate ours (the brought out another for a nearby table).  It was very moist and tasty and we enjoyed the Segovian experience.)
After lunch, we went back to the bus station to get a bust to La Granja.  We stood in a group outside the bus, purchased tickets (1.15 euro each) from the driver & found seats.  The ride was only 25 minutes, but it made unmarked stops with people trickling on and off.  By the 3rd stop, most of the people were getting up & we had to double check to find out it was our stop.

We were dropped off right outside La Granja Royal Palace (summer home for Spanish royalty) - our reason for visiting La Granja.  We split an audio tour & went through the palace & some of the gardens.  We knew a bus headed back at 5:55, so we made our way back to the stop. 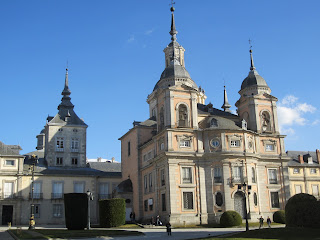 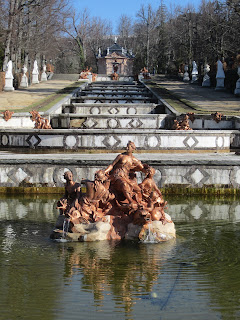 (Fountain that is central to the back of the palace.  The king and queen could look out their bedroom and see this central view.) 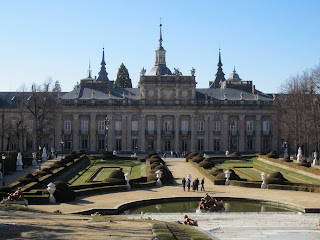 (Back of the palace form the central garden.) 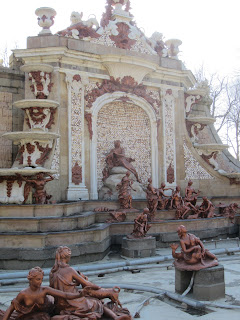 (The palace is known for its very elaborate fountains; however, the fountains are only on 3 days out of the year.  Here is the fountain in honor of Diana and Apollo)
A big group was trickling in as we came.  There was no order to loading the bus & a verbal fight broke out when loading.  The big group of 30+ people were trying to get on as smaller groups were trying to get on.  Only about half of the big group got onto the bus when the bus driver explained the bus was full and he had a schedule to stick to.  The people left behind trickled out of the stop via unmarked taxis.  Other people who had been waiting on the bus called up friends and taxis, too.  Us and a British family ended up saiting around another 1.5 hours for the next bus. 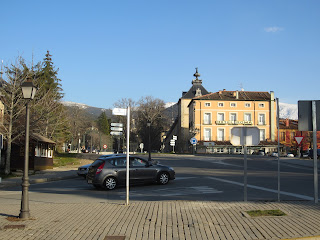 (The infamous area of the bus stop.)
On the way back to Segovia, the bus made several stops along the way, but we finally got back to the station at 7:50.  The next bus to Madrid was at 8, so we booked it off the bus and ran to the ticket line.  5 minutes later, we were on the bus headed to Madrid.  It also made several stops on the way back to the main station (and even stalled out and died at an intersection), but we finally got to the Madrid station at 9:40.

We got on the metro & headed home.  We were cold, hungry, and tired form the long day (and the drama at the bus top).  It didn't help, when we got in, we had difficulties opening up the door to the apartment.  It took 5 minutes and lots of wiggling of the key to finally get the door unlocked and opened.  Once we got into the apartment, we each munched on cereal, ice cream sandwiches, chocolate, trail mix, Coke and Fanta.
Posted by Unknown at 10:46 AM