For our last day in Rome, we decided to sleep in and take our day at a slower pace.  We woke up (me at 8am, Steve at 9am) to the sound of machinery & banging above us.  We know some sort of work had been going on up there due to the daily deposits of dirt and debris we would find laying on top of our stuff, counters, and seats at the end of the day.  We took our time getting ready and headed out the door.

The first stop on today's plan was St. Peter in Chains church.  While en route, it began to drizzle.  Of course, Steve had started our mornings walk talking about what nice, sunny weather we had been experiencing (even though March is known as the rainy season).  Although, we had already predicted the rain due to the overcast sky & chill in the air (again, I packed incorrectly for the trip and we did not have enough layers for wet, cold weather).  It was funny to see all the street peddlers (who once sold chotsky and little toys) were now lining the streets offering umbrellas.

We got into the church before the heavy rain came.  The church houses a grain marble tomb for Pop Julius II. Central on the tomb is a statue of Moses by Michelangelo.  The church is also home to the supposed chains that the apostle Peter wore while imprisoned in Jerusalem (Acts 12:3-9).  Like the manger pieces we saw at Santa Maria Maggiore, the chains were encased in a glass and gold box below the main alter. 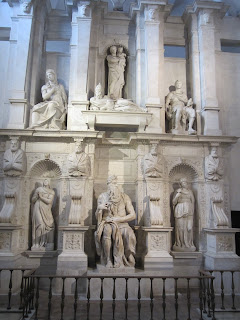 (Monument constructed for the tomb of Pope Julius II.  Pope Julius II is seen lounging central on the monument.  Below him is Michelangelo's Moses.) 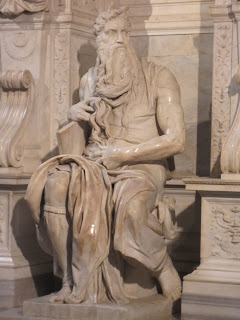 (Close up of Michelangelo's Moses) 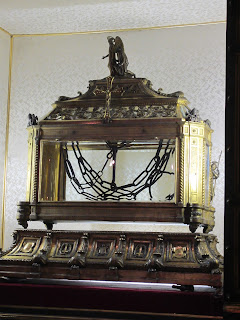 (The chains that held Peter in prison, located below the main alter.)
After the church, we began our tour of Ancient Rome, starting with the Colosseum.  It was confusing at first on how to enter due to the massive tour groups parked at the entrance.  However, we figure it out, got our ticket, & even bought a video tour.
We started off in the corridor on the 2nd floor filled with artifacts and explanations about the Colosseum.  It was raining again, so we read through the Rick Steves's Colosseum tour & watched some of the video segments.  The rain let up, so we ventured into the arena.  The sun poked out a couple of times, giving me some relief from the chilly air.  We sat on some steps, read the rest of our tour notes & watched the last videos.  Steve & I have discussed several times how hard it is to wrap our minds around the actual history and activities of such ancient sites.  We couldn't even begin to guess how many people and animals have died in the Colosseum.  While looking into the arena, you can see all the underground passages & lever systems used to enter exotic animals through trap doors into the arena.  A section of the Colosseum had been semi-restored to show how the seats & floor looked like. 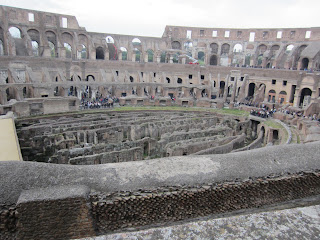 (Inside of the Colosseum -- In the Colosseum's hay-day, you wouldn't be able to see the underground passages that are exposed today.  There also would have been balconies of seats over the supports, that no longer exist.  You couldn't access the far side due to restoration work.) 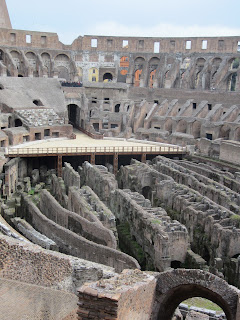 (Here you can see  the "semi-restoration" they did to show what the Colosseum would have looked like.  They recreated the floor that covered the underground passages as well as some of the seating (far end to the left of the entryway).) 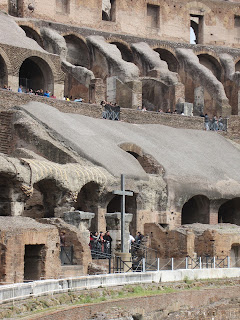 (In 1749, Pope Benedict XIV had this cross put in the Colosseum declaring that the Colosseum had been sanctified by the blood of all the christian martyrs who had lost their life there -- even though there is no evidence of such martyrs.) 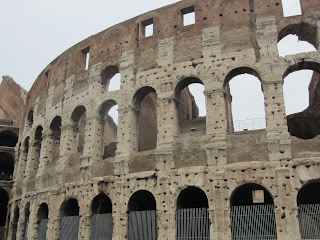 (The outside of the Colosseum.  Parts of the structure was damaged by earthquakes and fire.  Notice all the pockmarks in the wall -- bronze clamps used to hold the stonework together were torn out, melted down, and used elsewhere in Rome.)
After the Colosseum, we strolled by the Arch of Constantine and saw the "greedy gladiators" (Italians dressed up as Gladiators who will pose for pictures for money).  WE got a couple of paninis & a Fanta for lunch.  While eating, another American couple asked me to take their picture.  They were pretty surprised I spoke English.  I could tell I had been in Rome too long because it took me awhile to process that they were speaking English and what they were saying.  I'm finally used to all the Italian and we will be switching to Spanish tomorrow.

Next, we headed to the Roman Forum & Palantine Hill.  Between Rick Steves & English speak tours, we got a better sense of what Rome was like back in the day.  We were also able to understand more how these iconic structures were found.  I thought modern day Rome was built around these sites; when in fact, only the tops of some of the structures were poking through rubble & dirt.  After excavating and cleaning up the areas, we can now see how the Forum was once central to Romans. 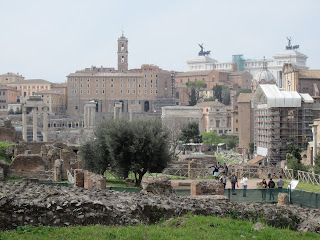 (Overview of the Forum, it is hard to see the ancient structures due to the decline of the hill.  How weird is it that there is such modern architecture surrounding this ancient site?  The white building in the background to the right (with the horses & chariots on top) is the Victor Emmanuel Monument.  The brown building with the bell steeple is the Tabularium of the Capitoline Museum on Capitol Hill.) 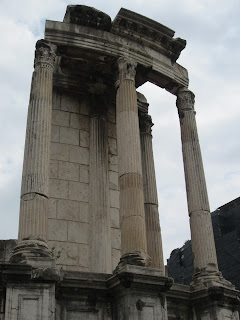 (Temple of Vesta -- held a flame that was tended to by the Vestal Virgins, who lived nearby.  The Vestal Virgins were held in high esteem and even had special seats in the Colosseum.) 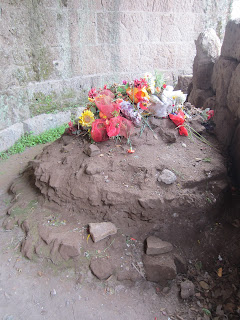 (Julius Ceasar was assassinated on the steps of the theater of Pompey -- located near our apartment -- but his body was brought to us house in the forum where they burned it.  Today, people still bring flowers to his grave in the center of the Forum.) 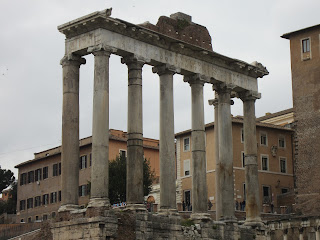 (Temple of Saturn)
Palantine Hill once held a grand palace for the Roman Emperors.  Only a few rooms can be pieced together with the fragments as well as a stadium (with gardens and a later added running track) as well as an open courtyard.  Due to some reconstruction, we were unable to see the site of Circus Maximus. 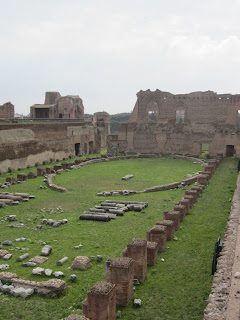 (View of the recreational area) 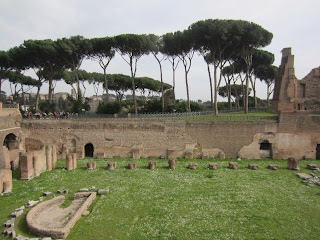 (The other end of the recreational area) 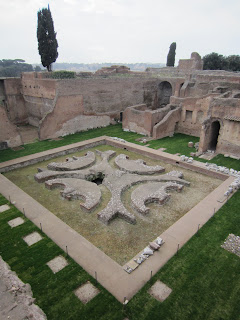 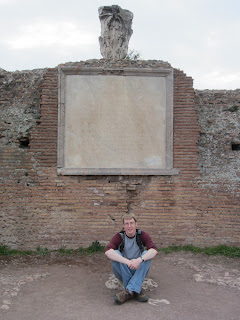 (Steve sitting on the missing throne in the "throne room".  This was once a huge room where citizens could come to the emperor and air grievances or ask for help.  The citizens would have to walk up Palantine Hill from the forum and cross through the huge room towards the emperor which was very intimidating.)
Our last ancient site was Trajan's Forum, Market, & Column.  To get there, we had to walk back down Palatine Hill, through the Forum, up the backside of Capitol Hill and around the Victor Emmanuel Monument (boy we're getting good at navigating Rome!).  Unfortunately, Trajan's Forum was closed, but we could still look upon the Forum. 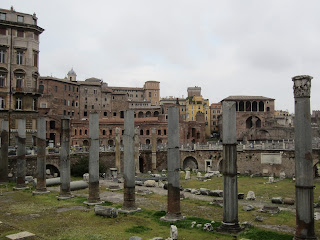 (Trajan's Forum & Market.  Trajan was an emperor  known for his conquests.  The forum was built from his spoils after the defeat of Dacia.) 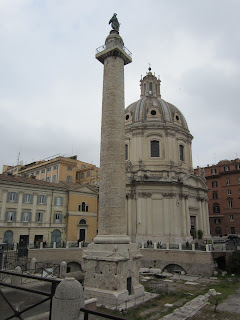 (Trajan's Column -- this column is located on the far end of his forum.  The column is encompassed in a continuous frieze that tells the story of Trajan's conquests against the Dacians.  Trajan's ashes were once in the base of the column; however, they have since been lost.)
We crossed the street and finally got up close to the Victor Emmanuel Monument (we've passed it every day, but the time has never worked out to go up and get a closer look).  As Steve was about to take a picture of their "Tomb of the Unknown Solider", our camera died.  Instead, we just got to enjoy the marble statue of Rome Goddess & the eternal flames.  In front of the flames, stood 2 soldiers at attention; however, they were talking to each other and even laughing at times. 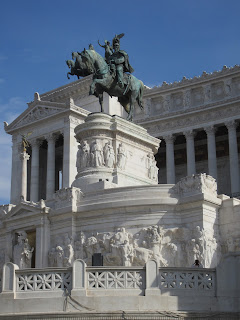 (It's really hard to grasp the scale of this building and it's statues.  The mustache of Victor Emmanuel (the man on the horse) is 5 ft across.  The horse is so large, a man can sit in the horse's hoof.) 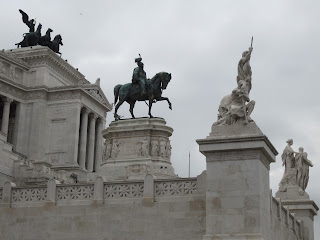 (This monument is not well liked by all Italians.  Many were upset with its construction because it destroyed a portion of Capitol Hill.  It's also very boxy and large compared to architecture found elsewhere in Rome.  Lastly, they hate it's pristine white marble that sticks out to its darkened stone neighbors.)
We continued up the steps to take a peak inside.  After we entered, 2 workers closed the big entry doors.  They were not letting anyone in or out that that location.  We figured out that there was another exit & we returned back to our apartment.

After a little rest (and charging up the camera), we headed back out for our last evening in Rome around 6.  We decided to try another recommended (by roninrome.com) gelato place in Trastevere.  Along the way, we stopped & split a potato pizza slice.  When we found the gelato place, it was closed.  We continued on to a piazza, but not many people were out.  We assume it had to do with the weather (still spitting) & being a Monday night.

We decided to head back to our apartment and stop at the gelateria we went to on the first night.  Steve got Stracciatella (chocolate chip) & I tried Zabaione.  It had a picture of a pastry, but it tasted like rum (after researching it back home, I discovered it is a dessert made with egg yolks, sugar, and marsala wine).  It was not my favorite.  While on this trip we tried these flavors of gelato: stracciatella (Steve's favorite!), zabaione, crema crostata (my favorite!), nutella (tasted as if I was eating nutella out of the jar, very rich), mixed berry, and kinder chocolate.

Once we got back, Steve began to plan out our travel to Spain while I packed.  We can't believe our trip is 1/2 over :(.
Posted by Unknown at 12:30 PM