Today, we slept in until 9:30.  After getting ready, we headed to the plaza right outside our apartment.  It was busy with a street market.  We walked by some of the booths and noticed lots of clothes and shoes for sale.  We headed up Calle Toledo towards Plaza Mayor & turned right towards Plaza del Sol.  We were headed to a ticket location to redeem our vouchers for tonight's bull fight. 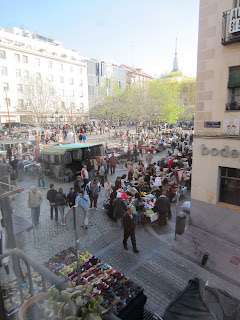 (View of the street market form our balcony)
Before heading to the ticket place, we detoured to look for churros con choclate (well known in Madrid).  We found the recommended location, but it was hopping and we weren't in the mood.  We found the ticket area a few blocks away.

After redeeming our vouchers we continued our walk towards Parque Retiro.  Along the way, we witnessed an older man peeing into a tree in a sidewalk.  He didn't even have the care to turn his back to the busy street.  The park had a lake in the middle that was filled with rowboats.  There was a walkway all the way around the lake that was full of street entertainment.  We glanced at some puppet shows, a dancer, and magician as we walked around.  We went to the opposite side of the park to see the "crystal palace".  Inside was some weird art exhibit and we didn't understand it.  So we headed back to the busier area. 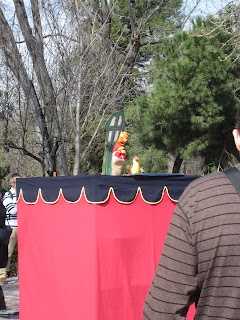 (There were several of these little puppet shows set up.) 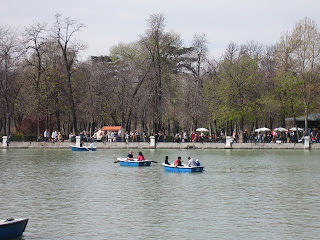 (View across the lake towards the busy street entertainment) 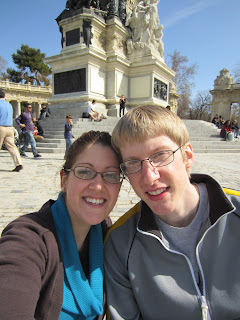 (We walked completely around the lake and stopped on the opposite side of the entertainment.  There was some monument that we sat in front of for awhile and people watched.) 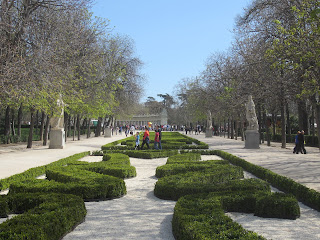 (A view of some of the gardens.)
On our last pass by the entertainment, we saw a guy with large dummies on his back.  He would bend over & make the dummies dance (his legs were the male dummy's and his arms were the female dummy's legs).  He was pretty good and we tossed some coins into his container. 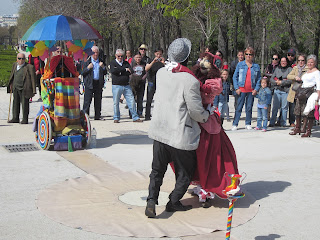 (We have a video of the guy dancing, but I couldn't get it to upload.  You will just have to settle for an action shot.) 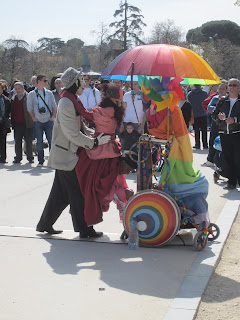 (Here you can see the guy poking out from under the dummies preparing for the next dance.)
We backtracked out of the park towards Plaza Mayor.  Along the way, we witnessed some protest in Plaza del Sol. A big group of people were chanting and had signs.  They were all wearing yellow shirts that had pictures of cutout people.  We think it had something to do with college but really had no idea.  We continued on our way and got lunch at Pans & Co again.  After lunch, we waded through the crowds (it was so busy due to the street markets and it being a Sunday) and headed back to our apartment.  We ducked into a little store and bought some pasta and sauce for tonight's dinner.  We noticed that most of the market was up & bustling while others were packing up. 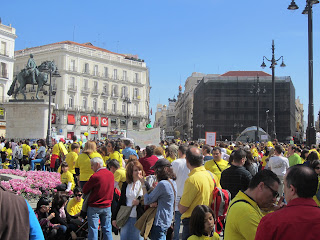 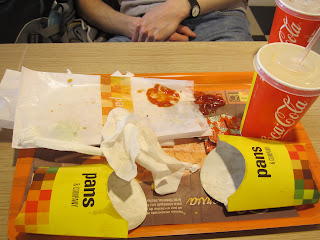 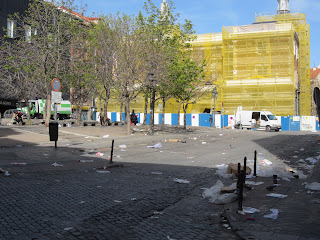 We hung out in our apartment for the afternoon.  I finished reading my second book of the trip (I read Girl with the Dragon Tattoo at the beginning, and then The Help) while Steve goofed off & napped.  At 5, we headed to the metro to get to the Bull fight.  The metro (same line the whole way) dropped us off right at the front gate.  We got to bypass the ticket line since we picked them up this morning.  Once inside, Steve suggested taking the 1st staircase up a level to figure out how to find our seats.  Funny enough -- the stairs dropped us off right in front of our section entrance.  A seating host took us to our seats.  The seats were cold stone, but we had a great view of the arena.  Before the trip, I had forgotten what happens in a bull fight.  I had dreaded how tonight would be watching a bull (well several) die.  Steve had done research this afternoon finding out 6 would die (there were 3 matadors, 2 bulls per matador, fought in 6 15 minute founds).  We stayed for 2 rounds (in which 2 different matadors fought 2 bulls).  We got the gist & the cultural experience but did not want to sit through anymore.  We still don't understand why it's such an event or when it's appropriate to clap. 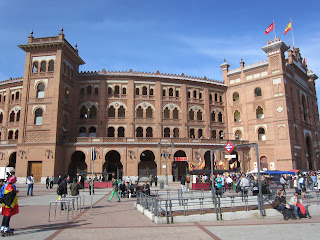 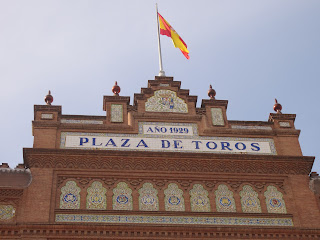 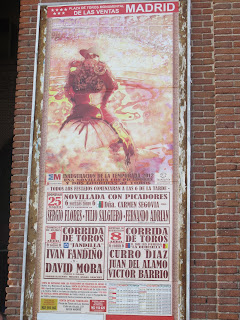 (This is the advertisement for tonight's bull fight.  The lead matador is from Segovia!) 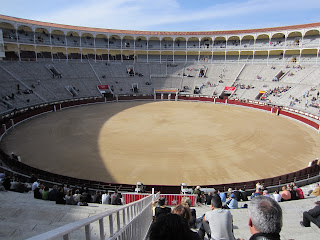 (Our view of the arena.  About 5 minutes before the show was to start, the arena was almost half full. It was not a full crowd.) 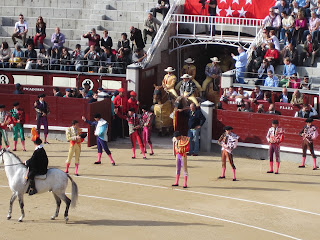 (All the matadors, men on horses, and others involved in the fight paraded around at the beginning) 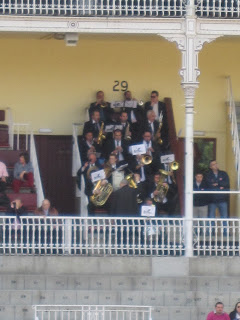 (There was a little band in the stands that would play throughout the show.  We think some of their playings would signify changes in the show.  We really don't know, ha.) 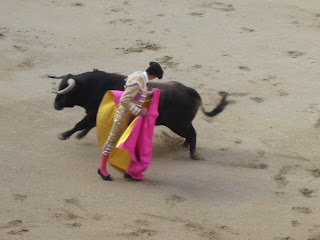 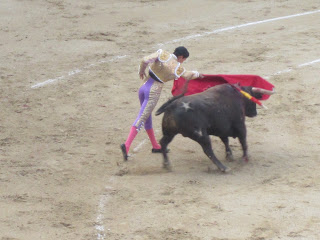 (This is the first matador from Segovia.  He was the best (they put the best first) -- here the bull has already been pierced and spiked.  The matador lets the bull do several passes before piercing its heart with the sword.  Good matadors only need to pierce the heart 1x with a sword.) 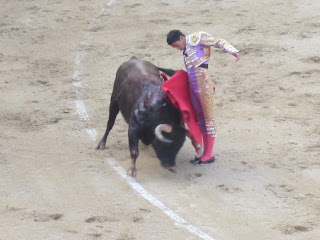 (Here you can see how closely the bull grazes the matador.  I don't understand the need for this section of the show other than letting the bull suffer in agony.  I also don't get the artsy moves the matador was doing, but to each their own.) 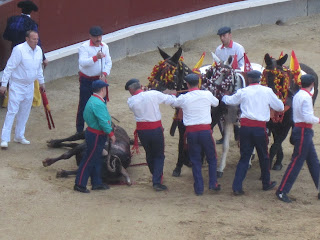 (After the bull keels over, it is attached to a horse processional that quickly takes it out of the arena (that is, after they cut off the ear and give it to the matador).  Then, little workers go crazy cleaning up the blood in the sand and prepare for the next bull's arrival.) 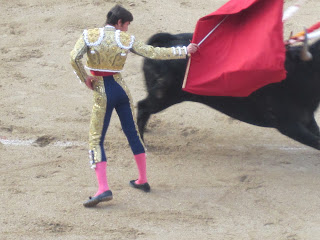 (Here is the 2nd matador.  He wasn't as good as the first.  He also had to use 2 different swords because the first one did not go through the heart.) 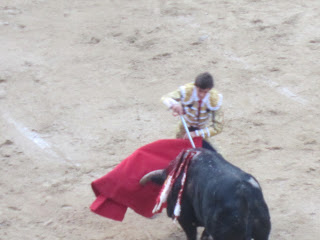 (Sorry for the grotesque picture, but thought I'd show how the matador sets the sword to enter the bull.)
After our hour at the bull fight, we hopped on the metro & headed to our apartment.  Once there, I made the pasta & Bolonesa sauce we had bought earlier.  Steve's allergies have been acting up since the afternoon's park outing.  He finished his evening off with video games (which sounds like a great way for him to finish his vacation) while I started the packing process for the last time!
Posted by Unknown at 9:03 AM