Since we just moved into our house (I think it still counts after 5 months to say you still just moved), the inside of our house doesn't need any spring cleaning (except for those areas that haven't been cleaned yet from moving. . . ); however, our yard and exterior of the house are in dire need of some attention.  Steve and I have both been busy working on various outside projects.

Steve has a few outside projects that will probably be an all-summer deal.  First off, he has been intently researching via books and internet about slate roofs.  He found a place in Columbus, OH that carries slate tile that we will be visiting in the next few weeks in order to buy some tile to repair the garage.  He has purchased several slate tools and is anxiously awaiting the new tile in order to fix the roof.  I am not a fan of this whole idea.  I'm okay with him fixing the garage since it isn't that tall; however, there are some tiles on the house (3 stories up!) that need to be fixed that Steve wants to do.  by himself.  on a ladder.  I am not a fan.

Since that's not something he can do until he gets the tile, he has switched gears to his 2nd project, which involves repairing some of the downspouts, creating correct draining grade around the foundation, and fixing some gutters.  We went to Menards (Steve's new-found favorite place) and bought some new downspouts that will be used throughout his project.  Most of the spouts just need some added joints at the bottoms, and of course angling spouts for proper drainage.  The most intense part of the project involves wrapping a downspout around a window in order to make the water flow away from the foundation (which we know is a big issue buy the condition of the basement walls and water that we find on the floor).  I don't understand most of this endeavor (like the "how" it will be executed.  Talk to Steve for more information). 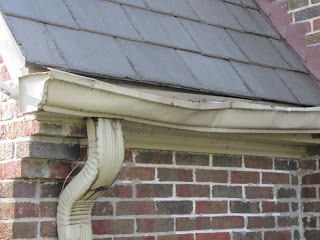 (A lot of the gutters are in bad shape.  Steve hopes to be able to bend it back himself and not have to replace the gutters.) 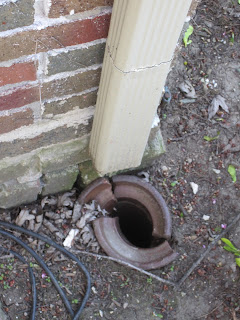 (In the backyard, there is some sort of clay tile drainage system.  We have no idea of the system is clear and working properly or if it's all clogged and causing more trouble.  We are just leaving that as is; although, Steve is going to fix the downspouts to connect to the system properly.) 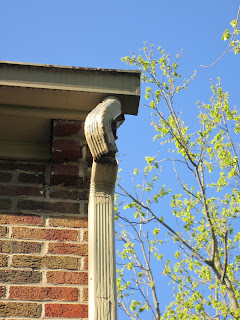 (In one corner of the house, the connection between the gutter and downspout is nonexistent.  That piece just sways in the wind.  Steve tried to reconnect it once, but it wouldn't stay.  He has purchased a new joint and will properly connect it.) 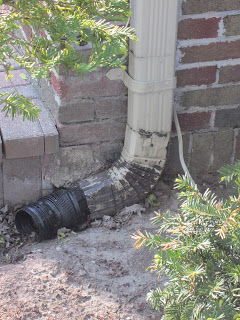 Originally, there were downspout pieces buried underneath the landscaping in one corner of the house, but the downspouts weren't connected.  Steve dug those up and has come up with a new plan.  He is going to shorten the downspout (pictured) and will create an angle with a joint connector and lay another downspout off of the angle which will take the water away from the house and put into the yard.  We'll do before and after pictures of this process when that project gets executed.) 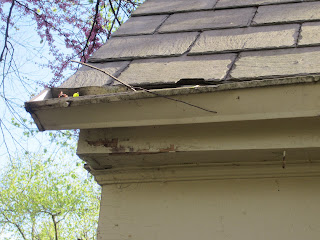 (Another thing that needs to be done, besides fix the gutter, is to clean all the gutters.  Especially now that all the helicopter seeds -which I detest and will talk about later -- have fallen.)

His 3rd project involves parching up the mortar in between all the bricks. Awhile back, he had bought some mortar and tools and was going to do it the old fashioned way, but on a whim (and again a trip to Menards) he found mortar in a tub that goes on easier.  He did a little area, but the color doesn't match at all.  The mortar in the tube (and from the bag) are grey tones, whereas our house has a beige mortar.  After some quick research, he has discovered that houses pre-WWII were made with a lime-sand-cement mix; whereas post WWII, they dropped the lime & sand.  So, now he's back to square one on that project and has to decide the next course of action.

Lastly, Steve now has a lifelong project of yard work.  He is definitely missing the yard work from TN (we mowed maybe 1x per month in summer because the grass was bizarre and mostly weeds).  Our yard is the saddest yard on the block.  It is full of dandelions and has obviously not been taken care of.  Steve has had several people stop and ask if he needs help (for $$ of course).  Steve hasn't decided yet that that is the necessary route.  After some research (have I mentioned how great Steve is at researching stuff before executing?), he decided to buy some weed killer/lawn fertilizer pellets and a lawn spreader.  He has done one application so far and we are awaiting the results in the next week or so.  His mowing record for this year is already up to 2. 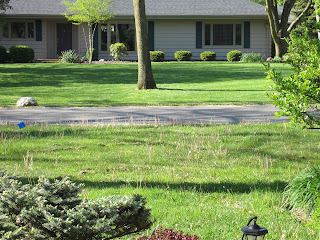 (Our dandelion graveyard or our front yard)

My work has been focused on the landscaping and plants.  Last week, I spent 2 exhausting days outside weeding in the main area of the landscaping.  I filled up 3 lawn bags full with all the weeds I pulled.  I can't believe how many weeds there were, it was very deceiving how the landscaping looked and what was thrown away.  I also moved a flowering bush to a different location ( I think I may have killed it in the process, but the verdict is still out on it), planted the azalea tree Steve's parents bought us, and replanted the window boxes.  I still have a couple more sections in the front landscaping and the entire back to do, but I'm waiting on the wind to die down and the temperature to go back up to continue in that endeavor. 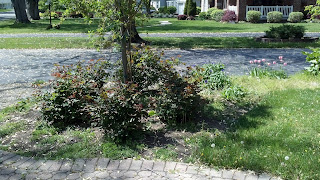 (Those are rose bushes surrounding some sort of tree that starts the path from the driveway to the front door.) 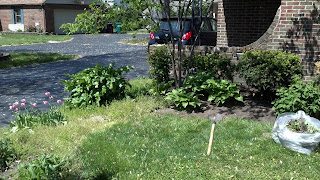 (Here you can see the weeds on the left, the right side has been weeded (which is why you can see dirt under the bushes).  I think that was bag #1 on the right.) 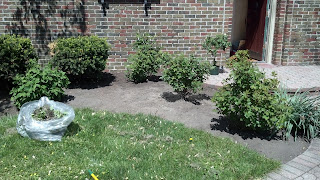 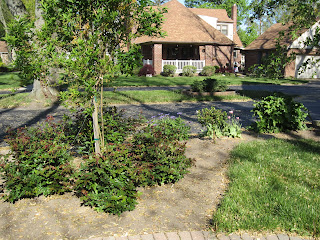 (Here is a closeup of that tree and rosebushes from the "before" picture.  You will have to disregard all the *expletive* helicopter seeds everywhere.  We will eventually cover the dirt with landscaping fabric (already purchased) and then cover with mulch.  We are waiting on all the stupid helicopter seeds to fall before completing the landscaping.) 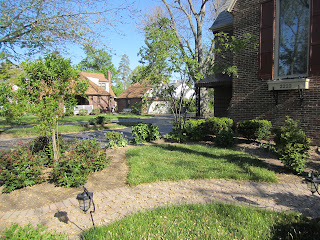 (Yay for clean landscaping!!  I still have to do all the weeding on the right side of the sidewalk.) 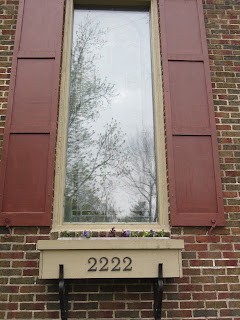 (I was afraid the flower box would look so puny-- which it does -- compared to the window.  However, once those little flowers start growing, some are supposed to be between 2 - 3 ft tall!  Ha ha, we'll see how they hold up in window boxes.) 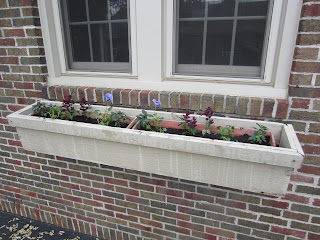 (We have 2 window boxes, one on the big fancy glass window in the front and the other under the kitchen window on the side.  Steve and I are not flower experts (although I pretend to be) we didn't know what species of plants would grow well together or hold up well in the flower box.  All I knew was to get plants according to the sunlight specifications.  We'll see how we did in a few months. . .) 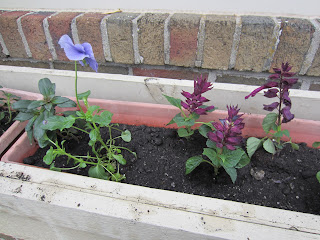 (Closeup of the flowers.  I have already forgotten the flower names.  I'm horrible at flowers.  I think the blue one on the left is either a peony or pansy (it was one of those).  The purple ones I know are snap dragons.  There is also a green one all the way to the left that was a mixed variety and we have no idea what color it will be (it may also have been a snapdragon).  I really don't know.  We just chose what looked neat according to the sunlight specifications. 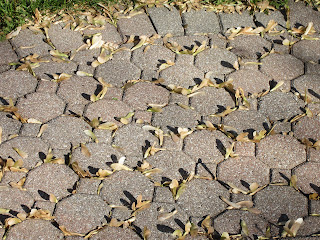 (So, as a kid I LOVED the helicopter seeds.  I would toss them in the air and run around as they fell.  They brought so much joy in my life.  Now as an adult, I HATE them with a PASSION.  These STUPID seeds are everywhere!!  We have 3 big trees on our property that are dropping them.  They drop on our roof, in our backyard, in our front yard, all over the driveway -- everywhere!  They manage to fly in when you walk in or out of the house, they stick on our shoes and go throughout the house.  I found one on my bedside table (which I was convinced Steve had placed there, but he said no) and one under a candle in our x-fireplace in our bedroom.  I HATE them.  I can't wait for them to finish falling!  I tried to sweep some up, but they stick to the pathway pavers and just flutter around from the wind.  Ugh.  I have a date with our leaf blower as soon as the last one falls.  Then someone has a date with cleaning them out of our gutters but I think we're gonna hire someone for that.) 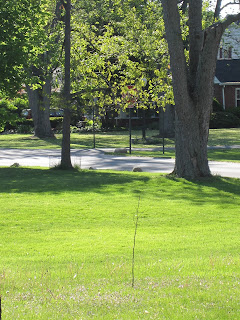 (No that is not a random branch stuck in our yard, it's a tree!!  Steve volunteered through work to help prepare some trees to be donated and planted around Lima.  Because of helping with the project, he was given one.  We are the new owners of a tulip poplar tree (because we need another tree in our yard).  It'll be interesting to see how fast it grows.) 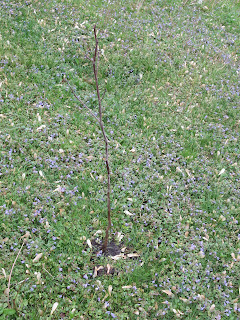