Last night when we went to bed, Steve's "allergies" were bothering him.  During the night, they were in full force. He had to get up a couple times in the night to blow his nose.  We woke up around 8:30, got ready, & packed.  We headed to the metro for our long trek to the airport.  Luckily, the metro would deliver us right to our terminal.  However, it would take us 3 different trams to get there.  We also had to purchase a special airport metro ticket.  1.5 euro got us to the airport stop & another 1 euro allowed us to enter the airport.  We knew about the special ticket & had purchased it ("airport combo") before entering the metro in the morning.  It took us about an hour to get from the apartment to the airport terminal. 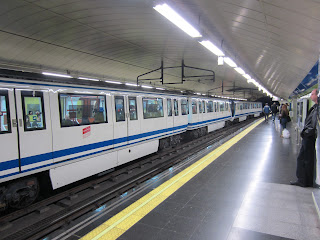 (Metro!)
Once we got to the terminal, we continued down the long hallway until we found the correct service desk for our flight.  We had attempted to check-in online the night before, but our tablet was having some issues; plus, we couldn't print the tickets since we didn't have a printer.  We waited in the check-in line for about 15+ minutes.  They took our bags, gave us our tickets, and sent us on our way.
Next, we had to go through security.  We went to the far one which was nearly dead.  It's funny how different European security i -- you don't have to take your shoes or light jackets off.  After we got through security, we had to go through a quick passport control, where we got a stamp for Madrid.  We were hungry when we got to the gate, but there weren't any food places (well there was one, but it wasn't up and running).  So instead, we bought a bunch of junk (potato chips, chocolate, Haribo gummy bears, and cookie wafers) at a duty free shop ("I like to stop at the Duty Free Shop. . . "  bonus points if you know where that came from.)
We boarded our plane & departed Madrid at 12:30 pm (or 6:30 am eastern standard time).  The first part of the flight went fine.  We were served lunch & drinks soon after take off (we both chose chicken & rice with broccoli).  Steve watched Rise of the Planet of the Apes while I started Black Swan, but then I switched to "New Years Eve" (Black Swan wasn't an eat & watch kind of movie -- ha!).
After the movies, the flight for Steve turned south.  His Dayquil was wearing off (I only had Nyquil left but he refused).  He also got really nauseous (but I think it had to do with his sinuses being stopped up and he was bending over his screen trying to play a game).  After laying back & drinking some water, his tummy calmed down.  He was still feeling pretty crummy, though.  He kind of dozed and zoned on and off while snuggled under 2 blankets because he had chills.  I just kept watching movies (The Big Year & Water for Elephants).  Some little snacks and drinks were served which Steve nibbled on.
When it was time to descend, Steve was pretty uncomfortable due to his sinuses.  I made him take some Tylenol & I rubbed behind his ears -- to get the fluid to move -- which helped some of the pressure.  We had a bumpy end to our flight (we literally bounced a couple times as we landed).  We pulled up to the gate at 2:45 pm (local time).
After getting off the plane, we had to go through customs which took forever!  Then we had to claim our luggage & carry it to a new belt to be loaded to the next plane.  Last, we had to go through security (American style -- shoes & jackets off!) which again took longer than it should (thanks to multiple people who didn't understand the liquids rule).
We headed towards our new gate at 4pm, but first we stopped at the food court.  What better way to welcome ourselves to American, than with Chik-Fil-A?!  Our order ended up wrong (even though we both spoke English) & we got a free sandwich & fries.  Oh well :)
We mosied to our new gate, but first stopped at a shop to get Steve some sinus medicine. I had a little time to quickly chat with my mom, but not long.  We boarded flight #2 at 5:30pm.
Our flight was supposed to take off at 5:44, but instead, it took off at 6:10.  I assume the delay had to do with the wind.  Steve had taken new sinus meds before we boarded & he could tell a differences on the ascent.  His ears popped a lot, but there wasn't much pain.  Our flight was quick & uneventful.  I journaled and read while Steve played his Tower Defense game.
The descent was a little rougher on Steve's ears.  He again asked me to rub behind them which helped.  I, too, had issues on the descent but mine was with motion sickness.  The plane was rocking a lot from the wind.  This flight was like the last in that it ended with a bounce.
We got off the plane (where Steve literally ran into a woman because she stopped in front of him) & we got our bags without a problem.  We followed the sings & found our shuttle to get to the car (we were the only ones on the bus).  Our car was right were we left it.  We loaded Penny up & set off for home.
The 2 hour car ride home was rough -- we were tired & losing it.  We listened to a podcast of Car Talk to stay awake.  We got home just before 10pm & noticed that all the flowers and tress in our neighborhood and front yard were blooming.  Our yard was in dire need of mowing & the landscaping was becoming over run with weeds.  As we pulled into the driveway, we had the overwhelming sense that our vacation was officially over :-(.
Posted by Unknown at 10:15 AM