We woke up at 7am, got ready & were out the door 20 minutes later.  We didn't want to lug our suitcases across town, so we got a taxi in Largo Argentina.  8.5 euro & 15 minutes later, we were at Termini Station.  Due to a Rick Steves tip, we knew there were airport shuttle buses located on the far west side of Termini.  We found a bus loading zone, but were unsure of the correct bus & where to buy the tickets.

We ended up finding a shuttle bus (not what Rick Steves suggested, but I didn't want to waste time) and just went with it.  We paid extra for the convenience instead of searching out the cheaper bus.  Another 12 euro & fighting onto the bus, we got seats together & were headed to Ciampino Airport (note: we entered Europe via Rome's Fuimicino Airport).  After unloading the bus & our suitcases, we entered the airport & found the Ryanair check-in.

After dropping off our luggage, we found the security check.  It was slightly different than how it is done in the U.S.  Here, you could keep your shoes & lightweight sweaters on.  The guy in front of us was oblivious to the situation & was taking forever.  We just skipped around him.  He had tons of stuff in his pockets and was still sorting his stuff by the time we were through security and headed to our gate.  We checked out the gate area, but went ahead & got a snack first, since we had 1.5 hours until our flight.  We each got a croissant & then headed through a little shop were we bought Kinder eggs for our nieces (Kinder eggs are chocolate eggs that have little toys inside.  They're banned in the U.S. because they're considered choking hazards).

The airport was quite small compared to the airports we've experienced thus far on the trip.  All A gates were positioned around a big square room.  We found a couple seats (there weren't many seats) and watched how the system worked.  Each gate door had a cue line.  About 15-20 minutes before the "boarding time" the cue would fill up.  We it got close to time, you would show your ticket/passport, exit through the door to outside, & board a bus.

We watched several cue lines fill up & empty when we noticed our own cue was starting to fill up.  Steve continued to sit & play his game while I stood in the cue & read my Kindle.  When an announcement was made for our flight, Steve joined the cue.  Crew members were working at their station, helping some handicapped passengers, and preparing the bus for our flight when Steve decided (against my preference, since he had been sitting and not taking the opportunity at that point) to go to the bathroom.  (It should be known that we were not assigned seats for the plane, and I was concerned with getting on the plane and getting seats together).  Lucky for Steve, he went to the bathroom quick and was back before the line moved.  We showed our tickets/passports and got onto the bus.  After a short 2 min ride, we unloaded right in front of our plane.  We were one of the first onto the plan and picked seats together, close to the front.

While on the plane, they did the usual pre-flight safety stuff.  It was all done in English via a recording.  Once we took off, the flight attendants went to work as salesmen.  First, they explained the food & beverage options, then sold smokeless cigarettes, lottery tickets, maps, toys, perfume, and other random items.

We got off the plane at a gate in a bigger airport.  Our luggage was already sitting on the non-moving belt.  We found a tourist information booth & got a map of Barcelona (our Rick Steves Barcelona book is  "snapshot" & doesn't include maps).  We asked them to point us in direction of the Aerobus (#2), which will take us close to where are apartment is located.  But before we found the bus, we split a sandwich & check out the map to familiarize ourselves with Barcelona.

The stop for the Aerobus was easily identifiable.  There was an automated ticket purchase (in English), too.  While on the bus, the stops were labeled & easy to figure out.  We got off the bus at Placa Espanya.  From there, we headed to find a phone & call our host.  We walked around for about 30 minutes, finding & trying several different phones.  Some were card operated while few were coin.  Our calling card from Italy seemed to do us no good.  We finally found a coin operated one (that worked) but the phone number seemed to be wrong.  That's when we realized we were adding the country code, which wasn't needed (thanks Rick Steves for explaining how to make calls via our Barcelona book). 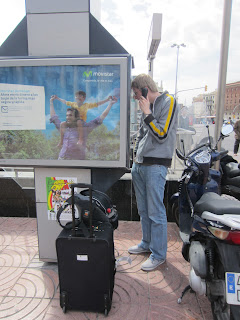 (Steve attempting to contact our Barcelona host.  You'd think after all our experience with European phones, we'd be pros.  Sadly, each phone seemed to be just a little different from the last one.  So bizarre!)
After reaching our host, we walked another 15 minutes to the apartment.  Apparently the online address was a street off, but she expected us to make the mistake, met us at the wrong street and then took us to the correct location.  While inside, she gave us some city recommendations and hooked us up with internet (hers wasn't working, but the beauty salon downstairs gave her access to their wifi).

After unpacking & settling in (5pm), we decided to attempt the metro to get to the Picasso museum (we had a ticked reservation for 7pm).  We walked a few blocks to the nearest metro stop & went in.  Inside, they had automated ticket machines (with English) that let us buy a T-10 card (10 rides, split among multiple passengers).  From our stop (Sant Antoni), we headed to the Jaume 1 stop (had to exchange lines at Passeig de Garcia).  Coming out of the metro, we were a little turned around.  We finally got ourselves oriented & decided to go to the church of Santa Maria del Mar, since we had 45 minutes til our Picasso reservation.  On the way to the church, it was really windy & cold. 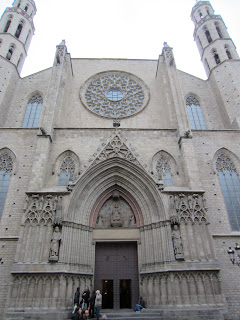 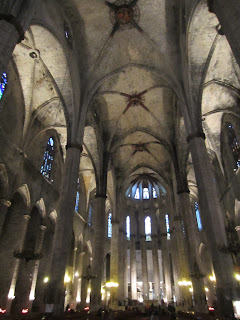 (A fire in 1936 destroyed a lot of the interior artwork.  Black scorch marks can still be seen on the ceiling from the fire.) 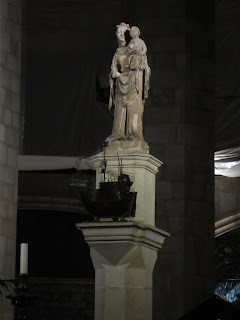 (This statue of Santa Maria near the alter has a ship at it's base for the connection to the shipping industry (for which the church was built).)
After the church, we walked to La Ribera & bought two baguette sandwiches from a nice fellow.  He got a kick out of speaking to us in English.  We ate our dinner then went to the Picasso Museum.  The layout chronologically laid out Picasso's paintings from age 12 until death.  The museum was rather fascinating, and really glorified the changes in Picasso's technique according to his life stages.  Sadly, we couldn't take pictures in the museum.

After the museum, we made it back to the metro, reversed our direction & line changes, and successfully made it back to our apartment.  Steve planned the next day while I figured out the laundry machine.  I had umped in the shower first before turning the washer on.  I also had to master the shower.  There is a handheld faucet, but there was no wall mount.  It made for an interesting shower!  While the load was washing, I dried my hair while Steve worked on planning the next day.  All of a sudden, the power went out.  Ooops :).  I had brought a little book light with me that we used to find and figure out the circuit board.  I guess running the washer and drying my hair at the same time is frowned upon in Europe.  After the load finished washing, I had to let it air dry overnight. 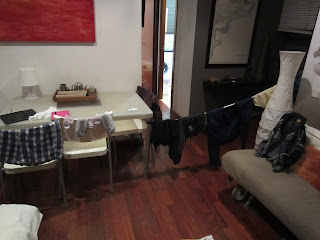 (There was a cabinet in the bedroom that we hung some stuff up on.  The rest got hung on a travel clothes line that Steve's mom loaned us.)
Another crazy apartment issue -- we were allowed to flush toilet paper.  Weird Europeans.
Posted by Unknown at 11:45 AM