I wasn't planning on tackling the half bath on the main floor, but Steve asked me to make it a priority.  He was done with it's gloomy (and bad) paint job.  Plus, the bathroom also had an old, musty smell that I hoped a fresh coat of paint would fix (air fresheners helped, too). 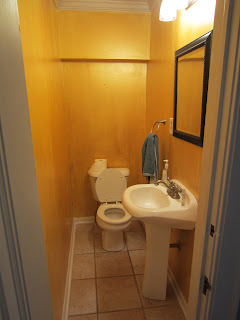 (Before the color was an orange, but had a bronze overlay. I liked that it was orange because it went with the living room color; however, the bronze overlay was streaky and inconsistent.) 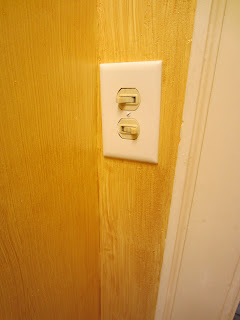 (Here is a closeup at the overlay, crooked lightswitch, and the trim.  The trim was multicolored -- they had tried to spot paint but used a lighter color.  It also had some dents and scratches.) 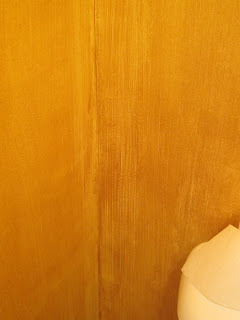 (Another shot of the bronze overlay.)
During: 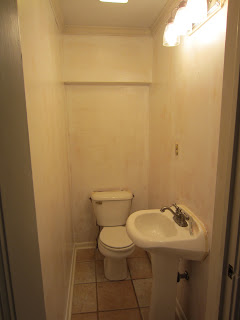 (I wasn't sure what color I was going to paint it, but knew it needed to be primed because of the previous paint job.  I went with a mildew resistant primer (which we found in the basement-- brand new!) since it is a bathroom and had a musty smell.) 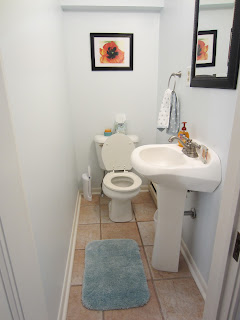 (I was going to do it a yellow color, but Steve threw out the idea of the color blue.  I didn't want it to be too dark because of the other colors downstairs.  When I started to paint the blue I had chosen, I was afraid it was too light; however, once it was all done, I really like it!) 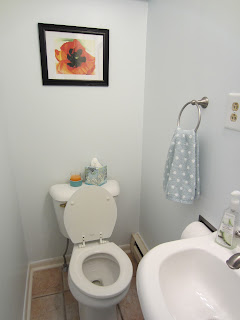 (I also got a new towel, rug, candle holder and Kleenex box to tie in the color.  The painting is an old print I bought back in college.) 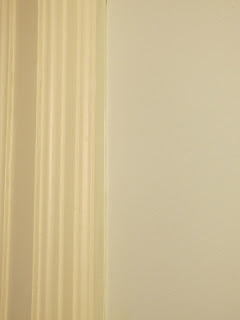 (Look at that crisp edge between the trim & wall!  Painting all the trim in the house is really daunting, but I love how clean it looks after it's done.) 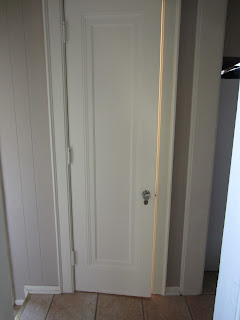 (The door had lots of scratches and crayon marks.  Not anymore! I even took off the knob, lock, and doorjamb hardware to clean them all up (they had paint on them).  After I got the door all painted, dried, and hardware back on. . . the door won't close!  I dunno if it's from a fresh layer of paint on the door, on the doorjamb, or that I repainted the hinges, but you have to force it closed, and then it pops back open.  Even the look won't hold the door closed.  I decided to start chipping the paint off the hinges (both what I did and the previous years of paint) to see if that helps, but it's not a priority right now.)
Posted by Unknown at 10:42 AM