This apartment was a first for us.  The guy we rented from, lived in the other apartment on the same floor!  The apartment we stayed in was actually his office.  He would pop in and out to get different things (he was packing to go on vacation) and we'd also see him in the hallway with his kids.  He was a really nice guy and spoke great English (he studied in the states for a year). (The front of the apartment building.  We were on the 4th floor, which is really the 5th floor, because crazy Europeans call the first floor 0.  How can you live on a zero floor?  Things to ponder at night. . . ) 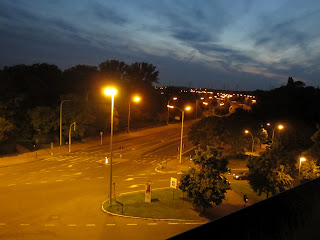 (View from the rooftop at night) 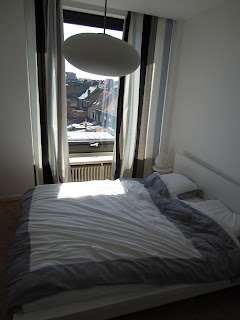 (The apartment had 2 bedrooms, but we stayed in this room.  We could have paid 10 more euros to use the second room, but obviously, we only needed 1 bedroom.) 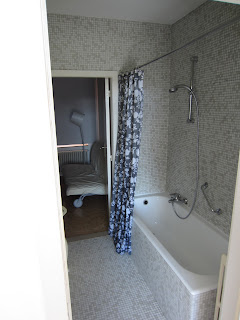 (The bathroom.  It had two doors, one leading to each bedroom.  You can see the other bedroom through the door.  The toilet was in a separate room off the main hallway.) 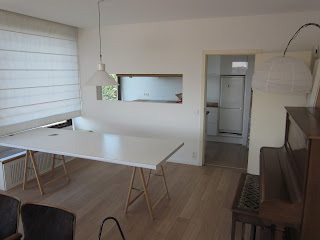 (What would be the dining room, although it was Olivier's office.  When we first came, he had papers and a computer on the table, but he had to clean them up and move them to the extra bedroom.  He explained the next week while he was on vacation, he was having some stuff redone in the apartment.) 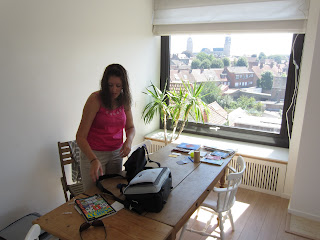 (Me "scurrying" as Steve coined it.  I thought I had more time to get ready and pack after our bike ride, when Steve explained we needed to leave sooner than later.  So I quickly through stuff into bags and we were on our way to Paris!)
Posted by Unknown at 3:09 PM