Before we went to bed the previous night, I discovered that Steve was out of socks so I did a load of laundry.  I thought that there was a dryer setting after the washing, but we woke up to wet clothes in the machine.  Since Steve didn't have any dry socks, I found the ironing board and iron and iron dried his socks (it takes about 4 -5 ironings and letting them cool in between).  It isn't that practical of a method, but it worked and we were soon headed out the apartment in search of a metro stop.

Along the way, we got turned around a couple of times.  Some road names didn't match up between the map and the streets and we had to guess at some intersections.  A Parisian noticed that we kept referencing the map and she jumped in (with English) and helped point us in the right direction.  Once we got to the metro we had to buy tickets, we used a little kiosk and tried 3 times to purchase a carnet (10 rides) but the machine kept rejecting our credit card.  Finally, another Parisian jumped up and explained that the machine took certain cards.  We had cash with us and got the tickets and headed along on the metro.

When we got to the right stop, we needed to find a Tourist Information in order to buy a museum pass (for 69 euros, you can buy a 6 day pass that lets you into nearly all the museums around Paris -- the Eiffel tower is the only main attraction that requires separate tickets.  The museum pass also lets you "cut" lines to just walk right into places.)  It's so hard trying to find places when you come out of a metro.  You never know which direction your headed (a compass would have helped).  But after a few tries, we finally found the spot and got our museum passes.  From there, we walked pass the Louvre and across the Seine to do a "Left Bank" walking tour.  The Left Bank is the common area of Paris.  On the tour, we got to see some apartments of different composers and writers, as well as some churches (one of which is featured on The Davinci Code). 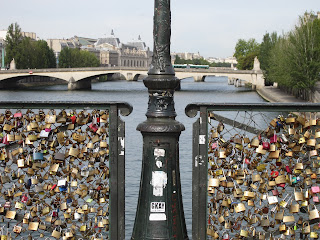 (Pont de Arts is a pedestrian only bridge that crosses the Seine River.  It's gated sides were loaded with padlocks.  The dates on the padlocks all seemed to be recent, so we are guessing that they are taken off every so often.  There are a couple of other gates/fences around Paris that have locks on them, too.  If only we brought locks with us -- we value our backpack lock too highly to put on the fence.) 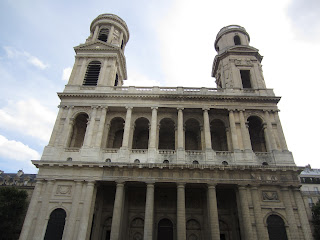 (Saint Sulpice Church -- it was featured on The Davinci Code movie. "The albino" Paul Bettany walks around the columns on the outside of the church and then enters and talks to a nun.  Next you see him follow the meridian line and break into the floor to find a tablet with a psalm reference on it.) 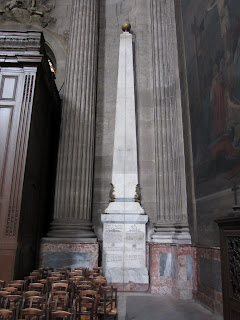 (This is an obelisk marking a gnomon, which uses a meridian line marked into the marble -- you can trace the line from the sphere on the top, down the obelisk and to the floor.  There is a small hole on the opposite side of the church that allows sun in on the line at certain times.  It is used to figure out the year's equinoxes and when Easter will fall.) 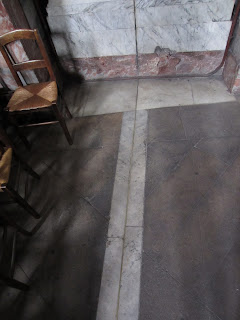 (Here you can see the meridian line on the floor.)


The tour ended at Luxembourg Gardens.  We found a food cart, bought some lunch, and just enjoyed watching the people in the park.  It was supposed to be an overcast day and I left my sunglasses back at the apartment.  Because of my Lasik, my eyes can still be sensitive to light, leaving me with a headache for most of the day.  I tried my best to ignore my head and just take in Paris around me. 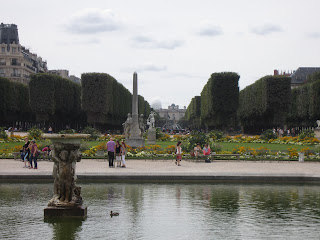 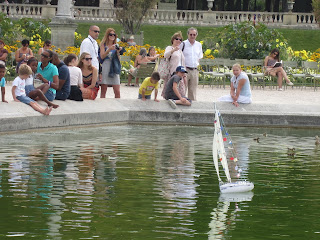 
After being re-energized with food, we walked a few blocks away from the gardens and visited Paris's Pantheon -- a mausoleum dedicated to some distinguished French citizens.  While inside we got to see a pendulum that Foucault used to demonstrate the Earth's rotation (the pendulum hangs from the central dome and is 220 ft long!).  In the basement, you got to walk through different crypts of famous French citizens, like Victor Hugo, Voltaire, Jean-Jacques Rousseau, and Madam Currie (to name a few). 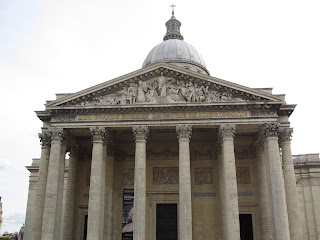 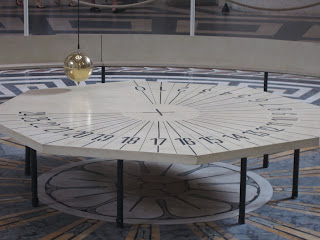 
From there, we tried to take the metro back to the Seine.  We tried to transfer at a station, but it was closed due to renovation and we had to walk (underground) to the next station.  It was kind of a fiasco, but we finally figured out where we were going.  After reaching our desired metro stop, we walked along the Seine until we found The Paris Sewer Museum.  We got our tickets (just had to show our museum pass) and headed below ground to tour some of the main intersections of sewers and learn the history of this one of a kind sewer system.  Yes we did see sewage, and yes we smelled the sewage.  The smell was not helping my headache, so I put Purell on my hands and would put my hand over my nose when I couldn't take it anymore.  The museum was interesting and you got to see some of the machinery they use to clean and fix the sewer.  Overall I thought it was gross, whereas Steve thought it was cool. 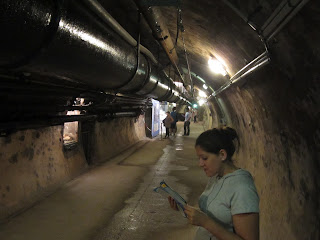 (Down in the sewer.  I was trying not to lose my lunch and figure out how long the tour was.) 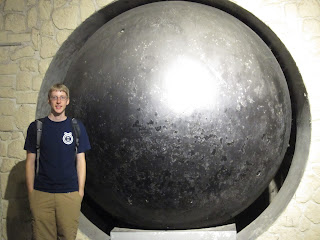 (This giant sphere is used to push stuff through the sewer when it is time for maintenance and cleaning.  They had different sizes for different locations.)


From the sewer museum, we walked several blocks to the Arc de Triomphe. Thanks to Steve (well actually Rick Steves, but Steve read about it and remembered) we found the pedestrian walkway that goes under the traffic circle and underneath the Arc.  We decided to walk the 284 steps all the way up to the top of the arch (a flash of our museum pass let us just walk right in).  It was neat to view Paris from this angle. 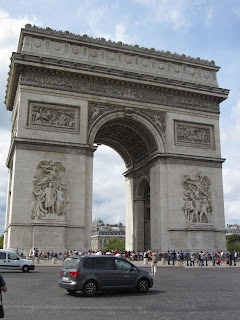 (Arc de Triomphe.  Look at all those tourists!  We really didn't see many people earlier in our day.  I am guessing that is because we toured lesser known areas.  Once we got to the arc & Champs d'Elysee, we found everybody!) 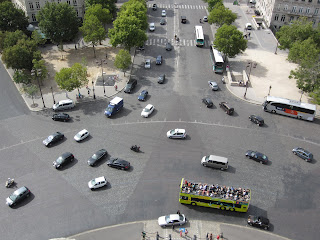 (We got an absolute kick out of watching the traffic in the circle.  Our book explained that traffic merging into the circle has the right of way, and if you are already in the circle, you have to stop and wait.  The system somehow works and it seemed to flow okay until you had the occasional tourist who would walk across the circle to get to the arch.  Silly tourists, use the underground passageway!) 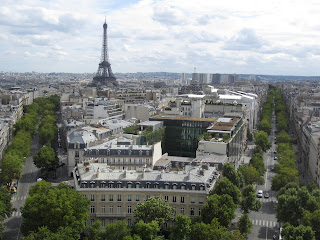 (The Eiffel Tower popping up through Paris.  There is a height rule on buildings (set into motion after a skyscraper-esque building was built on the other side of the arch -- not pictured.  Notice how flat most of Paris is now.) 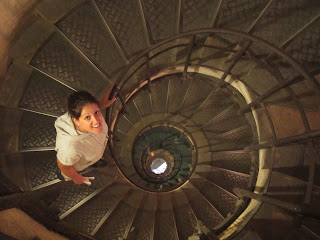 
The top of the arc started a Rick Steve's Champs d'Elysee walking tour and explained the different views from above.  We walked back down off the arch, and headed up the Champs.  The tour pointed out different shops and explained how the boulevard has changed over the years.  We had a couple of more things to see on the Champs, but there was a crowd of people forming (as if there was going to be a parade down the Champs d'Elysee).  We spotted several people with Olympic flags and wondered if it had something to do with the athletes returning from the games.  We decided we didn't care to find out, and we walked back to a metro stop and headed home. 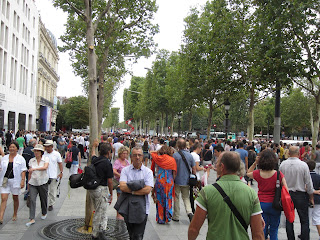 (The bustling crowd on Champs d'Elysee.  All of the people on the right were standing still and just watching the street.  You can't see it in the picture, but some people had Olympic flags and were waving them.)


Before heading into our apartment, we stopped in at a supermarket and bought Coke, Fanta, penne noodles, sauce, baguette, and pre-made sandwiches for lunch the next day.  When we got back to our apartment, I made the noodles and sauce.  We planned out our next day and headed to bed.
Posted by Unknown at 12:18 PM