After having such a long (and tiring) day at Versailles, we slept in the next day and allowed ourselves a late start.  Once we were finally up and moving, we headed out for a walking tour in Pere Lachais Cemetery.  I know a cemetery tour in Paris doesn't sound appealing at first, but the cemetery covers a large area and has some famous residents like Oscar Wilde, Jim Morrison, and Frederic Chopin.  It was also neat to see all the different kinds of monuments and their close proximity to each other. 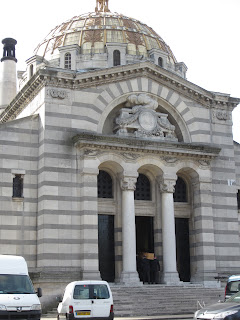 (The Crematorium as well as funeral chapel.  We just happened to walk by as a funeral was beginning.) 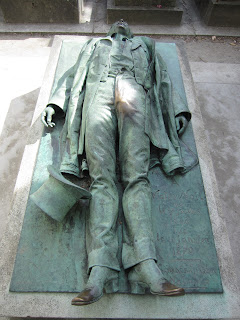 (We used a Rick Steves tour through the cemetery, but Steve added this monument of Victor Noir.  He was a journalist that was shot by Pierre Bonaparte - Napoleon's great-nephew.  The created his monument to look like the way they found him after he was shot.  The women of Paris especially like his monument and he became a fertility symbol of Paris.  Steve didn't have all of his information right when we visited the monument, and he made up a story about the guy.  At the time, I believed him and later discovered the truth thanks to wikipedia.) 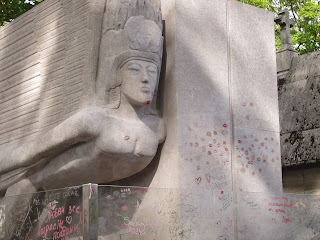 (Oscar Wilde's tombstone.  He was a poet and playwright.  He is looked to as a martyr for homosexuality, and the cemetery had to put up the plexi-glass to prevent people from writing and kissing the monument.) 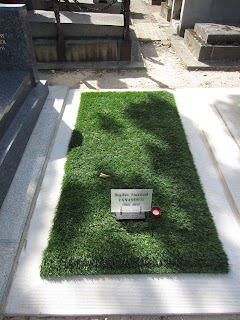 (There were a couple of monuments that were just covered with astro-turf.  There was no information in our book and nothing on the tombs to explain the grass choice.  It was especially weird to see these tombstones surrounded by regular monuments as well as older monuments.) (Jim Morrison's grave.  He was an American singer/song-writer that died of a supposed heroin overdose in Paris at the age of 27. No autopsy was ever performed.  This is probably the most sought-out monument in the cemetery and it had a fence around it.  Rick Steves even noted that there is often times a guard standing nearby, but there wasn't one when we saw it.) 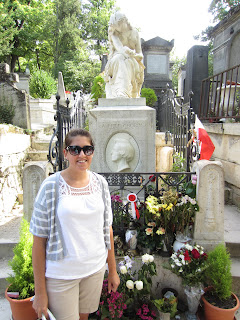 (Tombstone of Frederic Chopin.  I've played piano for almost 2 decades and have played several of his pieces.) 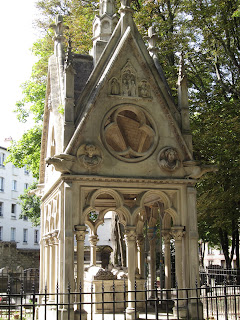 (Monument of Peter Abelard & Heloise.  Abelard was a medieval French philosopher who fell in love with a very young Heloise.  She became pregnant & they married.  Her uncle was upset at their union and had Abelard castrated.  Heloise ended up living as a nun.  She & Abelard continued their romance via love letters.)

After finishing up at Pere Lachais, we took the metro to the July Column which is a monument to the French revolution.  It is located in the center of Place de Bastille, which used to be a large fortress that was destroyed in the revolution.  From there, we walked through the aristocratic district, the royal square, went through the Carnavalet museum, and through the Jewish Quarter. 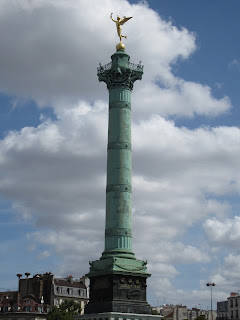 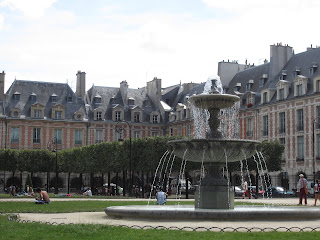 (Place des Vosges -- formerly known as Royal Square -- was built in the early 1600s by Henry IV.  It is literally a square - 140 m X 140 m and was built as a prototype for future European residential squares.) 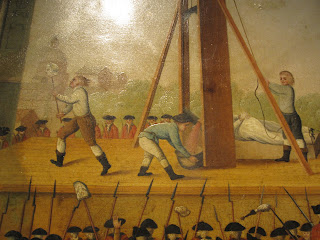 (The Carnavelt Museum had artifacts and paintings from the French Revolution.  This painting of Mary Antoinette's beheading was a favorite of ours.  Steve especially liked the guy catching the blood spewing out of her neck; while I thought the head on the stick was comical.)

By the time we went through the Jewish quarter, we were pretty hungry.  We got frustrated with how difficult it is to find quick grab'n'go meals in Paris (well really all Europe).  We were getting hungry and could find a place that suited what we wanted.  We ended up cutting the Marais tour short and walked to a department store that we knew had a food court.  We went up 5 floors and found the food court.  It was kind of stressful trying to figure out protocol -- it was the kind of place where you get a tray, go to different stations, then pay when you have your food.  We finally found a deal for a slice of pizza and can of soda for 6.40 euros. After eating, we headed across the river to see if we could get into Notre Dame.  There was a little line and I made the decision to wait.  I stood in the line while Steve rested in the shade (it was getting pretty warm in the sun).  The line moved quickly and we were inside Notre Dame within 10 minutes. 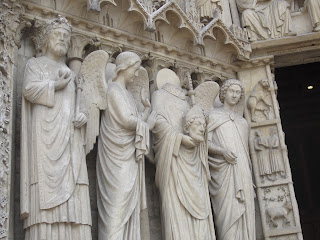 (Close-up of St. Dennis on the outside of Notre Dame.) 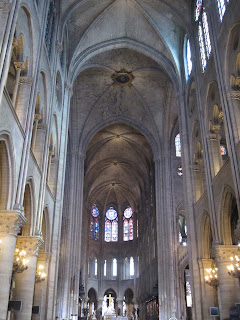 (Inside Notre Dame.  You can tell that this church is very much constructed in the Gothic style.) 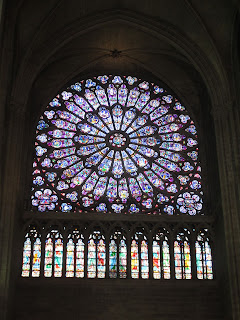 (This is the only rose window in Notre Dame that has its original medieval glass.  It is located in the left transept -- left of the alter.) 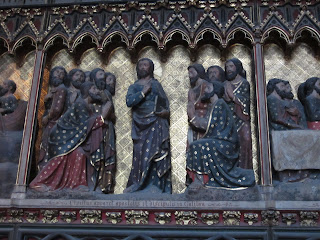 (Along the outside of the choir behind the alter, there are carvings of Christ reappearing to his disciples after his crucifixion.)

Since our return to Notre Dame was a successful one, we decided to go ahead and try again to visit Saint Chapelle Church.  When we got to the Palais du Justice (the chapel is located within the Palace of Justice), there was barely a line!  Before getting inside the palace, you have to go through security (because their congress/state justice still meets in the building).  Once through security, we were able to get into Saint Chapelle and see its stained glass. 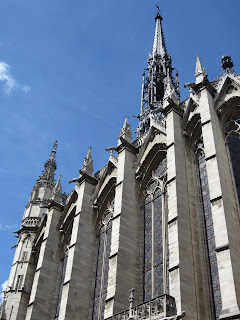 (Outside of Saint Chapelle.  It's crazy how glass from the outside just look dark. It also appears to be a sort of hidden gem because it is surrounded by the Palais du Justice.) 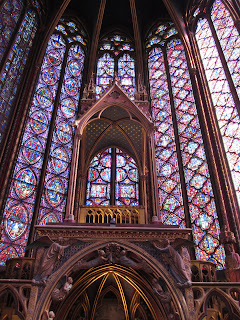 (Inside Saint Chapelle.  All the walls are full of stained glass.  This chapel was made to house the supposed crown of thorns worn by Christ.  However, that relic is no longer housed in the chapel.  The left side of the chapel has a big building next to it, so the sun never comes in on the left.  We went in late afternoon and the sun was shining brightly through the glass on the right.  It cast all sorts of colors inside.  It was beautiful!) 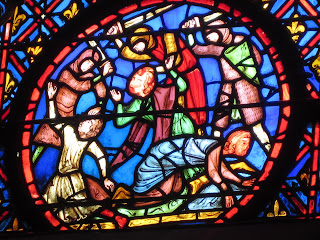 (Close up of the stained glass.  Moving around the chapel, the stained glass tells stories from the Bible from Genesis through Christs death.  There is also a section that has scenes explaining how the relics were brought to Saint Chapelle. 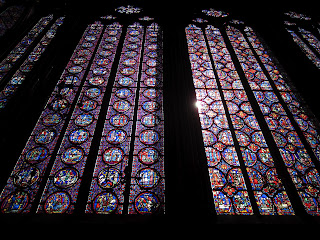 (We sadly forgot to bring our binoculars with us to the chapel.  We could only see the first few levels of the windows.  I must say, this was quite impressive!)

After viewing Saint Chapelle, we called it a day.  We returned back to our apartment, but first stopped at the grocery store to pick up an entree for dinner.  We got some more sauce, a couple of baguettes, and lunch meat.  When we got back to the apartment, we just lounged around and watched some Grimm (we're closet Grimm fans and used our free time to catch up).  I made penne noodles & sauce for dinner.  We had thought about going to see the Eiffel Tower, but decided we were tired.  We figured out what our last couple days in Paris would look like before heading off to bed.
Posted by Unknown at 6:58 PM