Our flight got into Brussels at 8:30am.  We quickly went through customs, got our passports stamped, picked up our luggage, and got euros from an atm.  Next, we had to find the train station (which was located just below the airport) and purchase tickets to get to Brussels central.  We had no issues ordering the tickets on 2 separate credit cards.

The train ride was quick -- only 15 minutes with 2 stops.  At the next train station, we found some luggage lockers (thanks to Rick Steves) but we needed change to use the lockers.  We had some Euros left over from our last trip, but not enough.  Nearby in the station was a little market where we bought our first FANTA!!!  of the trip.  This purchases affirmed our love of European Fanta.  Over here, the drink tastes more orangey, less sugary, and not as carbonated.  With the change, we were able to store both suitcases & both our travel bags for the day for only 4 euros -- not bad!

We quickly got oriented with the layout and headed on Rick Steves' Grand Place walking tour.  Grand Place is the main square in the heart of Brussels which houses the town hall, the king's place (where business is done), cafes, and lots of chocolate shops.  We didn't hit any chocolate shops today, but Steve promises Belgian chocolate in my future. 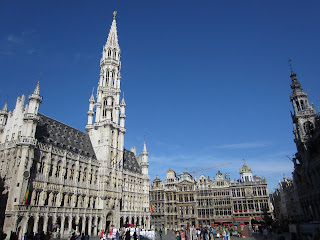 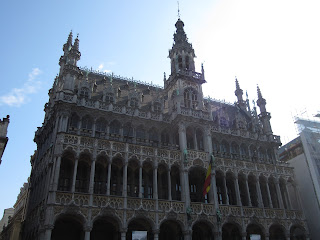 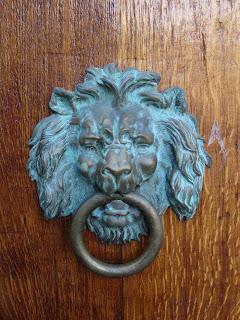 (We found this door knocker on a door in the main square.  It reminds us of ours back home!)


From there we walked to Galeries Royales St. Hubert, Europe's oldest still-operating shopping mall which is the inspiration for malls around the world.  We walked through the mall and detoured off of the walking tour to go in search of the comic book museum & shop.  On the way we went a little off track and accidentally got to see St. Michael's Cathedral.  We went inside and saw part of a mass.  We then headed back on the correct way and found the comic book museum.  We skipped out on the museum portion and just wandered through the shop.  We ended up buying a Tin Tin comic book (Tin Tin was created in Belgium) since Steve read the series as a kid.  The book be bought just so happens to pick up the story where the movie left off. 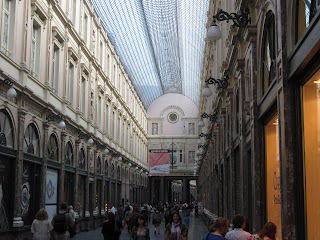 (Galleries Royales St. Hubert -- the shops inside were all pretty upscale.  There was a store that handmade shoes, a hat store, lace stores, and chocolate shops.  There are also upscale apartments above the stores.) 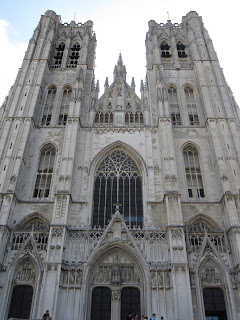 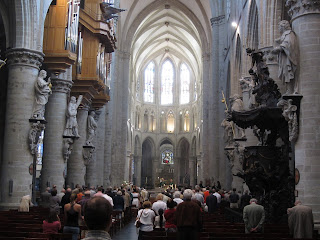 (We got to see part of a mass.  There was a signing quartet that we listened to and got to hear the organ played.) 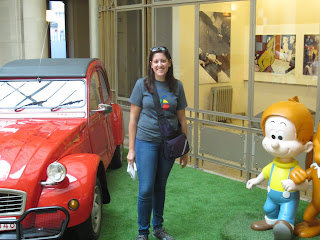 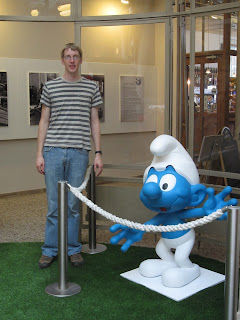 (Along with Tin Tin, the Smurfs were also created in Belgium.  Can you tell how wiped Steve is??)


After the comic book store, we headed back to the galleria and continued the Grand Place walking tour.  It was around noon when it hit us how tired we were.  We went in search of lunch and settled on some baguette sandwiches.  We didn't know what was in them (although I did use my french skills to eliminate some of the sandwiches) until we bit into them -- tiny onion bulbs, pickles, ketchup, some creamed meat --> pretty gross!  Not to self -- don't choose "Martino" sandwiches.  On the bright side, we washed the baguettes down with our second Fanta of the trip/day. 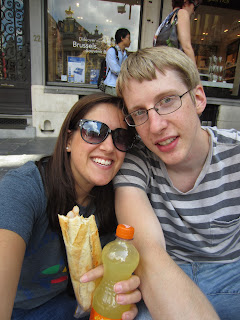 (Weird sandwhich -- you can see 2 onion bulbs poking up out of the mush on the inside, but the bread was very good.  But European Fanta makes anything okay.)


Feeling a little more energized, we walked "up-town" to go on Rick Steves' Upper Town Walk.  Just getting to the starting spot tuckered us out (the city literally inclines and we had to do a couple sets of stairs, as well).  We sat on a bench and decided what we realistically could accomplish in Brussels since we were fading fast.  We decided to push on and hit the BELvue Museum (city & royal history).  It was very interesting, but we were discovering that standing still to read and learn about the history was working against us. 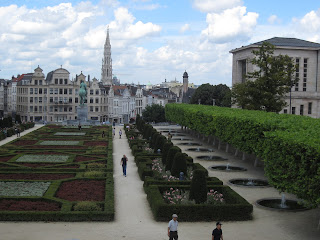 (The view from Upper Town looking towards Town Hall -- tall buidling in the middle.) 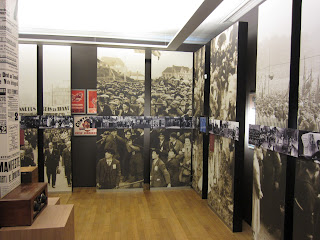 (Inside the BELvue Museum.  They had several different rooms that took you through different eras in Brussels.  It was quite fascinating, I just wished we weren't so tired so we could look at more stuff!)


We continued on the tour seeing the outside of the Royal Palace next (although, now Belgian royals live on the French Riveria).  We decided to cut out a portion of the walk, since the next section took you down a ways and back the same way.  The short cut we took on the walk just so happened to take us right in front of the hotel I stayed in 4 years ago when I went to Berlin in college.  Due to the airlines fault, we missed our connection in Brussels and was put up in a swanky hotel in downtown Brussels.  It was neat to see the same spots I'd seen before, only this time we had information thanks to Rick Steves! 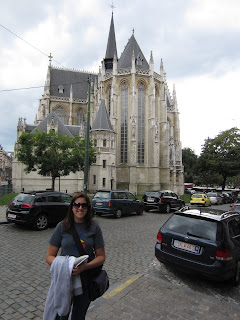 (Notre-Dame du Sablon Church.  4 years ago, I stood on this spot with my college friend Juli Hoon!  We had no idea what this church was other than cool, but now thanks to Rick Steves I know that inside is a statue of Mary roped in lace that is parade through the city once a year.) 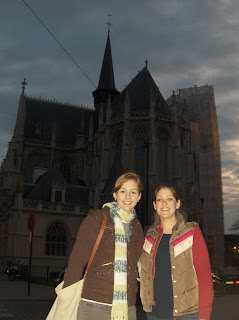 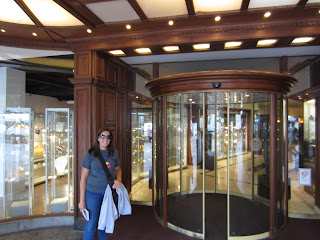 (We just so happened to walk right in front of the hotel I stayed in on that trip in '08 -- The Jolly Hotel Du Grande Sablon.  It was very ritzy, and I felt pretty sketch just standing there for Steve to take a picture.  When we stayed there (on the airline's dime) we got served fancy meals in the dining room.)

The last stop on the walk was to see the Manneken-Pis.  It's a statue of a little boy peeing.  It's a low-key symbol of Brussels representing their care-free nature.  Throughout the year, it goes through several costume changes and it's costumes can even be seen in another Brussels museum (we decided it wasn't worth 10 Euros each to see his outfits). 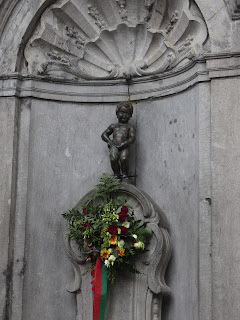 (Manneken-Pis, sadly he wasn't dressed up today.  However, next week is a big flower festival in Brussels, so he had flowers on his monument.) 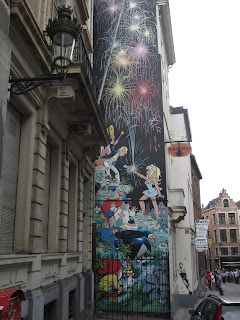 (One of the random comic book graffiti-ed walls around Brussels.  There's a comic walk you can go on to see all the different graffiti and memorable spots, but it didn't make the itinerary.)


By the time the walk ended, it was overcast and sprinkling a little bit.  We were also dragging our feet and thought it best to just cut the day short and head to Mechelen.  We went back to the train station and purchased train tickets (this agent had issues with our needing the tickets on 2 separate cards, oh well) before getting our luggage out of storage.  We only had to wait about 10 minutes for the 3 o'clock train.  The train ride was only about a half hour with 3 stops along the way.  When we arrived, we looked for a payphone to use but none of the ones we saw took coins.  So we broke out the international cell phone on loan from a co-worker (thanks Jeremy!).

We got a hold of our host's dad (our actual host is in Africa right now) who offered to come pick us up from the station.  Him & the Mrs. (we never got their names) showed up shortly in their tiny European car.  We could barely get the 2 suitcases in the back, but we managed it somehow.  The ride to the apartment was only about 5 minutes, and they pointed out main roads along the way.  We got to the apartment and they showed us around, answered our questions, and gave us suggestions for things to do in Mechelen (which is pretty much drink beer).

After they left, I spent a little bit of time unpacking and settling in while Steve took a quick nap.  I knew once I sat down, I'd be done for the day.  After unpacking and settling in, I made us dinner -- penne noodles and marinara sauce.  We learned our lesson from the last trip about not having enough food (and being too cheap to buy stuff here, ha ha).  So I actually packed a can of sauce and noodles in our suitcase.  When I was unpacking, I saw that TSA had gone through our suitcases (they left a note).  The can of sauce apparently boggled them.  I had wrapped it in a specific way with 2 plastic bags, and they had torn through the bags to inspect the can.

After eating, we knew we we were done for the day, but we were trying our hardest to stay up past 8pm.  We tried to watch some Olympics, but we both kept nodding off.  We called it quits at 7:45 and crashed into bed.

Oh, and to explain the title.  Brussels is known for its mussels, but I don't like seafood and we didn't feel like sitting down at a restaurant (we knew we wouldn't want to get back up).  But I changed it to muscles because ours were definitely worked on our first day in Belgium!
Posted by Unknown at 10:17 AM