We were up and out of our Mechelen apartment just a little after 9am on Saturday.  It's hard to believe that we have already spent a week on our journey.  We headed to the train station with our suitcases in tow.  Not many people were out yet, so the trip to the station was easy and uneventful.  We bought our tickets and were on a train to Bruges.  We had an hour long train ride and the first half was nice and quite; but a rowdy group of teenagers got on the train at one of the stops.

Once we got to Bruges, we oriented ourselves and began our 20 minute walk to our host Olivier's apartment.  We had told him that we wouldn't arrive until later in the afternoon and had made arrangements to pick up the apartment keys in the mailbox; however, we ended up getting there earlier than we said and there were no keys.  We waited a little bit and then Steve decided to try buzzing the intercom.  Surprisingly, Olivier was in the apartment!  The current guests hadn't really checked out which is why the keys weren't down there.  Olivier was changing sheets and cleaning up, but he let us put our suitcases in the apartment and showed us around.  He explained things like internet and gave some city recommendations and then we were on our way.

The apartment was located just a few blocks away from a main shopping street. We got to the shopping district and headed towards the main square.  Along the way, Steve spotted a Rick Steves endorsed waffle vendor.  Steve ordered a waffle with chocolate and owner engaged in a conversation about Rick Steves (he saw our book).  He told us that Rick had just been by 2 weeks ago with his family and that he preferred the plain waffle. 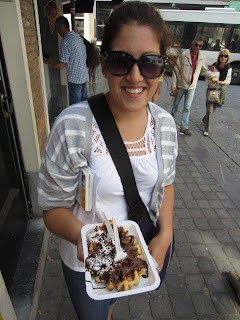 (First Belgian waffle.  We got a waffle with chocolate from Laurenzino's.)

After enjoying our first Belgian waffle, we continued walking and got to the main square.  From there, we began a Rick Steve's walking tour.  On this tour, we got to see the Bell Tower, City Hall, Basilica of the Holy Blood, the Begijnhof, and Our Lady Church.  While on the tour, we went into a museum within City Hall and got to learn some of Bruges history.  We also got to see a handmade wooden fireplace that is one of a kind. 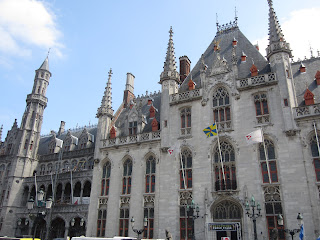 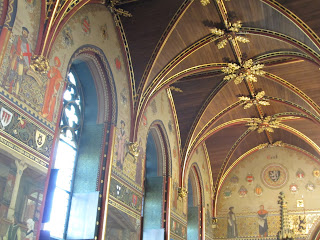 (Inside the City Hall.  We paid money to go and see some of the paintings and maps that explain Bruges growth.) 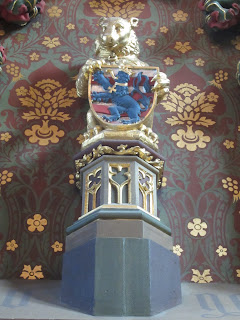 (Symbols from Bruges coat of arms and flag.) 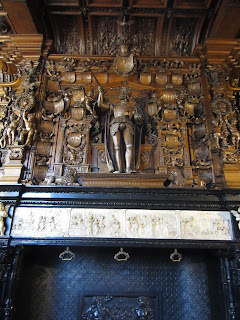 (Very ornate handmade wooden fireplace.  It is one of a kind and can only be seen in Bruges. It was sort of a hidden gem.  We wouldn't have found it without our trusty Rick Steves.  Because we paid to view the maps and paintings in the city hall, we could go to another building and see this fireplace for free!) 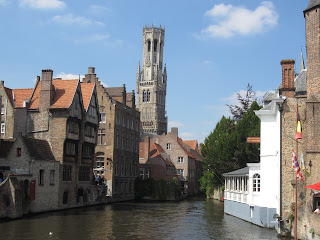 (As Rick Steve's says, this is a "post card" view of the Bell Tower over a canal.  The Bell tower leans about 4 ft!  It was obvious from some angles, but the degree of  tilt hasn't changed so they aren't concerned.) 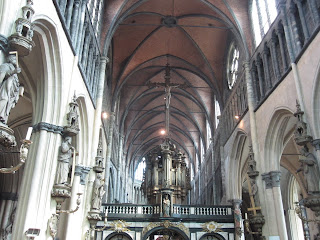 (Inside Our Lady Church.  The pipe organ  was located right in the center of the church.  It could be seen from all around.) 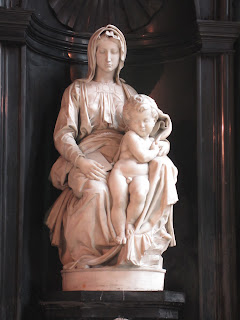 (Michelangelo's Madonna and Child, this piece of Michelangelo's artwork is supposedly the only sculpture that left Italy in his lifetime.  It is now housed inside Our Lady Church.  We thought you didn't have to pay to see it, but we did.  But we were granted the student fee and only had to pay a euro each!) 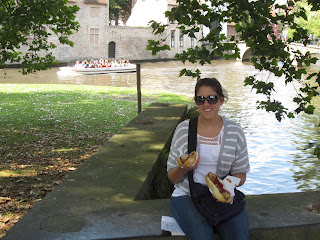 (Enjoying our Bratwurst along the canal.  They served the bratwurst on an entire baguette!  We both got ketchup and onions on ours.  They were really good and a lot of food for the price!) 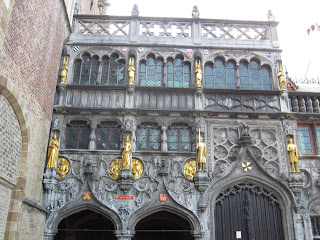 (Basilica of the Holy Blood.  This church had to different floors.  The bottom one was very gothic and gloomy feeling.  It reminded me of an old basement.  The second floor was much more ornate.) 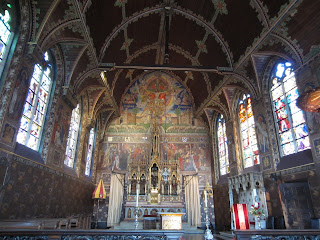 (Second floor of Basilica of the Holy Blood.) 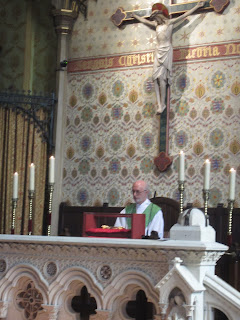 (Supposedly, this church has a relic that contains Christ blood.  You could give a "donation" and see the relic upclose and receive a blessing form the clergyman. We chose to just view from afar.) 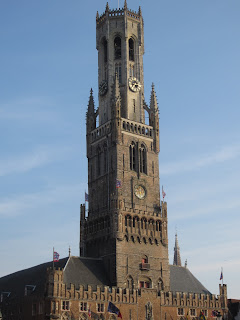 (Bell Tower in the main square.)

We finished our tour around 4pm & decided it was time to take a break and go back to the apartment.  But along the way, we first stopped in at a Rick Steve's endorsed chocolate shop -- Chocolatier Dumon.  As soon as we got into the little shop, they saw our book and began speaking English to us.  They gave us the "Rick Steve's" treatment and explained that we should just get a little assortment mix and decide what we like from it.

Back at the apartment, we tried to recuperate and decide what to do in the evening.  Oliver popped in again to give us another pillowcase.  We figured out that he owned the two apartments on the top floor. He, his wife, and 2 daughters lived in one apartment while the other (the one we were staying in) was his office.  After a couple hour break, we decided to go out and find something to eat.  We got sucked into buying another waffle, only this time, we bought a waffle with strawberry and whipped cream topping.  I think it was better than the chocolate one!  The waffle is already pretty sweet and the strawberries were a good complement. 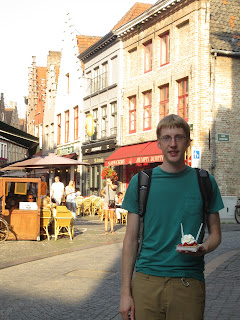 We decided to just walk around the city, following some directions that Olivier gave us.  The walk took us along some canals and dropped us back in the middle of town.  We found a bench and sat there awhile and just people watched.  We decided we were going to go back to the main square and people watch there before heading back to the apartment.  But as we walked through the Burg (just off the main square) we discovered that there was some sort of dance/concert going on a stage that we'd noticed earlier.

All around the city, we had noticed that there were "stage" entrances set up in different buildings and tents.  We realized that all of those places either had people inside them, or waiting in a line to go in.  We watched the main stage a little bit and saw that people were dancing along to an instructor.  Steve quickly caught on that it was Zumba and that the different stages had different themes.  We went to the main square and popped inside a tent to see some polka dancers.  With our curiosity intrigued, we decided to check some more out.  But first, we sidetracked and bought some Beligan fries with Andaloosa sauce. 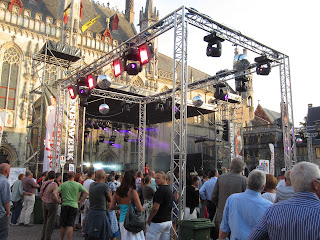 (This was the main stage set up in the Burg in front of City Hall  -- you can also see the Basilica of the Holy Blood to the right.  We later realized that we were watching people doing Zumba to an instructor at this point in time.) 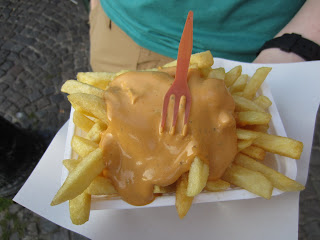 (Belgian Fries with Andaloosa sauce.  Fries are a big deal in Belgium.  You have the choice of a ton of different kinds of sauces.  In the US, we usually just eat ketchup with our fries; but the Europeans eat mayonnaise with theirs!  Well we decided to go crazy -- upon a recommendation from one of Steve's Mechelen coworkers -- to go with Andaloosa.)

The next stage we checked out was some Folklore stage.  When we went in (this one was located in a building), people at the door handed us tickets.  Steve somehow managed to sneak in without a ticket.  Inside, we saw a bar they had set up, someone singing on the stage, and people randomly dancing around.  We were dumbfounded as to what was going on.  When we left, we had to turn the tickets back in.  It was very confusing and we didn't get what was going on.  The next stage we went to was a Ballroom stage.  We had to wait a little bit in the line, and that is when Steve realized the tickets were a way to regulate occupancy inside the stage rooms. 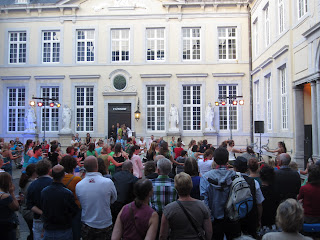 (Some sort of Belly dancing "stage".) 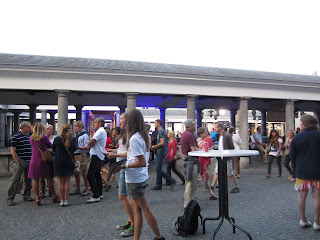 (This site used to be the area where fish was traded, but now it's just used as a little market with souvenir stands.  But on this crazy night, it was the "clubbing" stage.  We watched it and saw no one dancing here.)

With our curiosity more intrigued combined with classic people watching, we ended up walking around and visited several other stages.  At 9:30, there was supposed to be a concert on the main stage from a UK band called Brassroots.  We waited around like 15 min to watch the band.  They were comprised of a couple of trombones, a tuba, 2 drum sets, and 2 trumpeters.  No one sang, and we weren't even sure what song they were playing (supposedly they covered some popular songs).  We stuck around for half of the first song, but then we called it a night and just returned to the apartment. 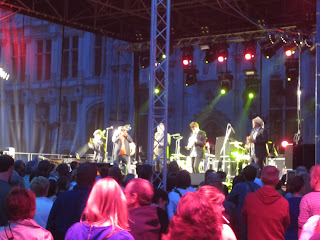 (Brassroots)
Posted by Unknown at 6:00 AM