Today we woke up early and took the metro towards Notre Dame Cathedral.  We wanted to get there early and get a spot in line to walk 387 steps up to the top of the tower.  We got there about 45 minutes early, and the line was already filling up.  The tower tour opens up at 10am and they only let 20 people in every 10-15 minutes.  By the time it was our turn, we had stood in line for just over an hour.  Right before we got to go in, it began to rain.  We had looked at the forecast and it didn't call for rain and we left our umbrella at the apartment.  Up on top of the church, the rain wasn't that big of a deal, but when we got back down, it was picking up. 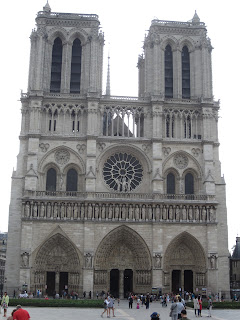 (Notre Dame -- this is at 9:15 in the morning, notice that there aren't that many people and no line to get inside  When we got done with the tower portion, this area was packed with people - and umbrellas - and the line went down the block.) 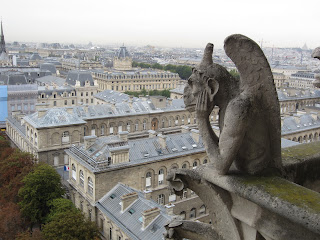 (Probably my favorite thing about the tower -- the bored gargoyle watching the tourists below, ha ha!  Even though you had to climb up 387 stairs, it wasn't a straight shot.  You first walked up a little bit to the main entrance, then you went up a spiral staircase to read the first balcony.  After viewing the belfry, you walked to the other side and continued up another spiral staircase to reach the top.) 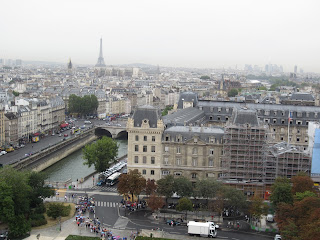 (View from the balcony.  Can you spot the famous landmark in the background??  We will see that later in the week.) 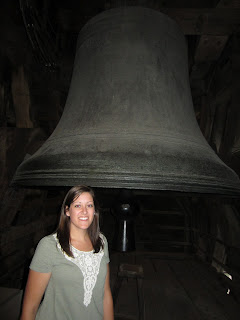 (The great bell up in the belfry.  Sadly, there was no Quasimodo sighting. The experience would have been better if Clopin or even Esmerelda were singing some of the classic Hunchback of Notre Dame songs.) 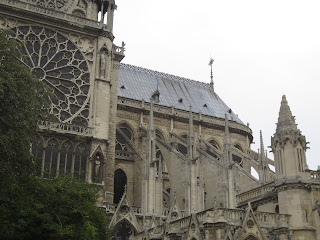 (FLYING BUTTRESSES!!!!  Who knew that Steve was so obsessed about flying buttresses?  If I heard that term 1, I heard it 100 times.  When we first got there, he couldn't see them and was all concerned that he couldn't get a good angle shot.  When we were up visiting the tower, I still heard him pondering if he could see them from above. After walking around towards the rear, they were finally spotted and Steve's Paris trip was complete.) 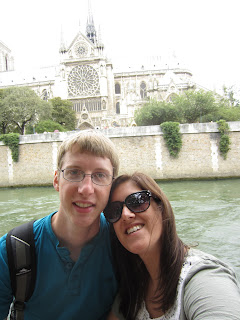 (Bah ha ha, this picture literally took us like 6 attempts, and we still failed at it.  At least we got a good laugh out of it, and little proof that we were both there at Notre Dame.)

After visiting the tower, we were going to go inside the church but a long line had formed just to get into the church.  We are guessing that it had something to do with the rain.  We found a dry spot to sit in under some trees and decide what to do next.  If the rain was going to last all day (which it looked like it might), we knew we would be miserable.  We kept debating and decided to take it a step at a time.  We went ahead and and visited the archaeological crypt nearby Notre Dame (showed fragments of the area from medieval times).  By the time we were done in there, the rain was more like spitting and we decided to continue on a walking tour.  We first stopped and ate lunch -- pre-made sandwiches purchased the night before.  Then we headed to a holocaust memorial, a walk through the Latin quarter, and St Severin Church. 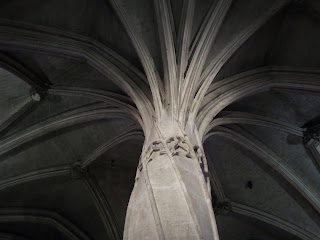 (Swirly Twirly spiral behind the alter at St. Severin.) 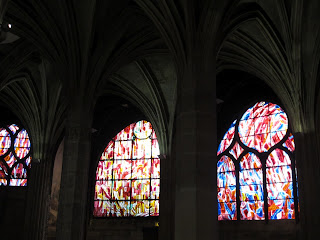 (The swirl from the spiral was "echoed" in the stain glass behind the alter.) 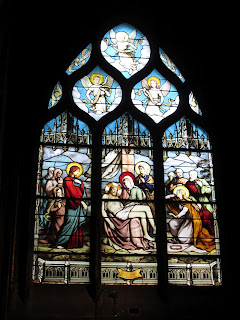 (The rest of the stain glass around the church was normal scenes depicting different Biblical events.  I tried to take a picture of the two types of stained glass to show the disjointed effect the church had, but the picture didn't come out.  You will just have to settle for looking at the two kinds of glass separate and imagining them next to each other.  It made the church appear Gothic and yet modern at the same time.

After making our way through the the Latin quarter, we walked to the palace of justice which houses the famous Saint Chapelle Church.  There was another really long line for the church and we decided that since it was so close to Notre Dame, we could visit both of them again later in the week.  We then ended our tour with a trip into the Concierge, which used to be a prison.  Prisoners would wait in their cells until it was their turn to be picked up by a cart and taken to the guillotine.  Inside the Concierge, we got to see a replica of what Marie Antoinette's cell looked like. 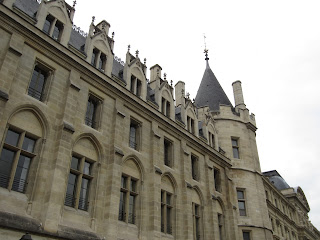 (The Concierge.  One of the towers -- we'll say it was this one -- was called "The Babbler"  because the prisoners moans could be heard on the street as they were being tortured.) 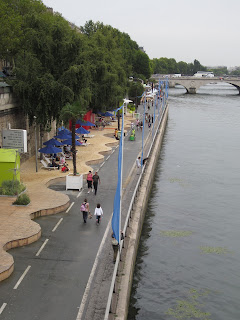 (Ha ha, oh Paris.  During the summer, Paris closes this usually busy street right along the Seine and constructs its own "beach".  They construct the platforms and load them up with sand.  They put in some lounge chairs, umbrellas and even some outside bean bags in some areas.  Because of the rain, not many people were on "the beach", but they were utilizing the umbrellas.)


We headed back to our apartment after the tour ended.  The rain had started to pick up again and we were ready to be inside and relax.  After a few hours, we headed out just a couple blocks away from our apartment to go on a walking tour of Montmartre.  We saw Sacre-Coeur basilica, the birthplace of bohemian culture, artists homes, and the seedy area that surrounds the Moulin Rouge. 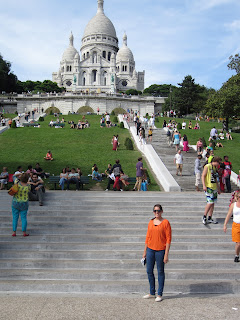 (This was a pretty seedy area in front of the church.  There is a scam going on in Paris where these guys try to sell you a friendship bracelet.  They put it on your wrist before you can say no and you can't get it off.  Luckily, Steve knew about it, and we had to dodge several of those guys.  We also witnessed a drunk guy going crazy in front of the church as well.) 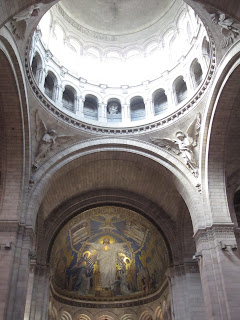 (Our contraband photo of the inside of Sacre-Coeur.  Steve took a picture before we discovered you weren't supposed to --- ooops.  We don't understand why some places won't let you take pictures.  Some churches have signs posted talking about it being a sacred place, and yet two feet away will be souvenir coin machines.  I just don't get it.) 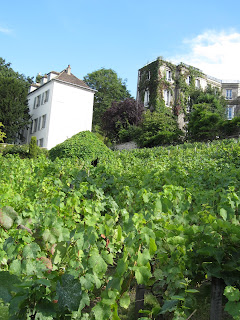 (The only vineyard in Paris.  It is tended to by some local monks and nuns who sell the wine after the harvest for charity.) 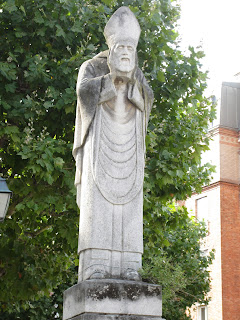 (Statue of St. Denis.  He is the patron saint of Paris, who after his head was cut off, supposedly picked up his head, washed it off, and continued walking 6 miles before dying.  He can be seen inside some churches as well as on the facade of Notre Dame.) 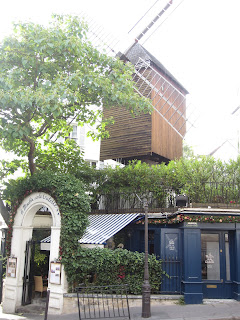 (One of the last windmills in Paris.  This one is atop of a trendy little restaurant, located several blocks away from a very famous windmill. . . ) 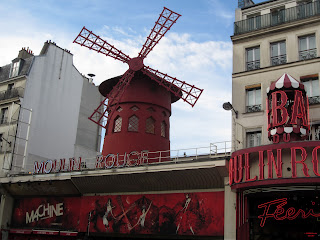 (The Moulin Rouge!  No, we did not go in.  The entire area around Moulin Rouge is quite seedy.  Our walk took us through Pigalle (also known as pig alley) which is laden with cabaret shows, sex shops, and prostitution.  We quickly skee-daddled through this area to finish up the tour.)

The last street on Rick Steves' Montmartre tour was our very own street Rue de Martyrs.  We can say that we stayed in an apartment on a street that THE RICK STEVES has walked down!  We especially thought it was cool that we know some of the history of the street and about the different shops we pass by every day.
Posted by Unknown at 10:47 AM