Today marks Steve's last day of training in Mechelen and the beginning of our European vacation 2.0.  He wasn't sure what time he would get done on Friday, but told me to be ready to go for when he shows up.

I did my usual tv, blog, and word games book and was ready to go for the day by noon.  Steve left me with "homework" for the day.  I was to figure out how to print some brochures on Antwerp & Bruges using Lieven's (our host's) printer.  I couldn't find his computer (just the monitor and the printer) so I gave up.  But after giving it a second thought, I decided to look for the cables and see if I could just directly plug my laptop into his printer.  Sure enough I found the cables and quickly had the drivers downloaded.  Before putting in too much effort, I had the brochures printed off.  I did it with great timing, as Steve showed up less than an hour after my printing success.

Around 2:30, we headed to the train station to purchase tickets and get on a train for Antwerp.  Even though there was a festival as well as gay pride going on in Antwerp, we decided it would be a nice evening out.  We got on the train with no problems, but getting off wasn't as flawless as we had hoped.  Steve didn't realize that Antwerp had 2 train stations and we got off on the first one (which was wrong).  We quickly realized our mistake and just hoped on another train to take us to the main one.

The correct stop took us to Antwerp Centraal which is a big and well known train station.  Steve had high hopes to be able to go and visit either a museum or church before everything closed at 5, but we were pushing 4:15 by the time we were exiting the train station.  We decided not to rull out run to some museum to speed through it, but instead decided to take a leisurely Rick Steve's stroll and just enjoy Antwerp's features form the street (since we'd miss going inside places due to the time).

We first walked down De Meir which is a pedestrian only shopping area.  We passed by many known stores like H&M, Hugo Boss, and even a Disney Store!  The walk pointed out different architecture, main shopping mall, and home of famous artist Peter Paul Ruebens (not to be confused with Pee Wee Herman). 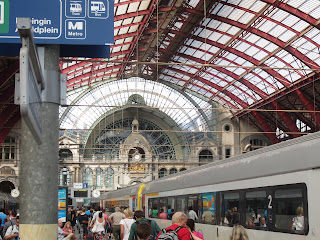 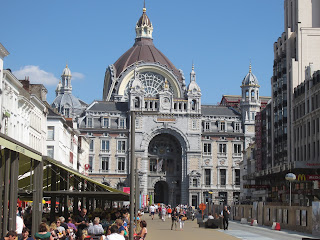 (View of Antwerp Central Station from the outside.  You can't see it in the picture, but to the left of the station was a festival going on with little chotsky rides and fair like food along with a big Ferris wheel.) 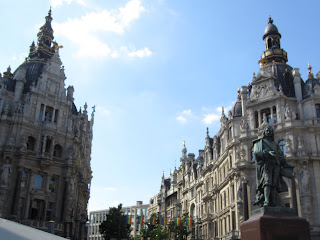 (Entering De Meir, the pedestrian only -- bikes were allowed -- shopping district.  Notice the gay pride flags hanging between the two buildings?  They were hanging everywhere all over the city!) 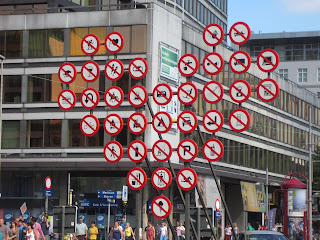 (We found these signs to be great!  It was hard to tell what all was prohibited, and it's even harder to tell in the picture; but a few of our favorites are -- no dogs, no dogs pooping, no swimming, no ice cream, no ladder, and no horses.  This was in an area in the middle of the road separating the pedestrian only area.  There were a few plants around the signs, but definitely no water to swim in, and no area that you'd need a ladder.  And there was no ice cream being sold in the area, I guess the sign told them!) 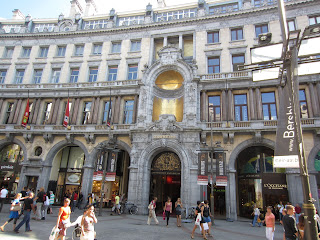 (This is the front of a shopping mall like we are used to in the states.  Inside was a nice lobby with access to several different stores.) 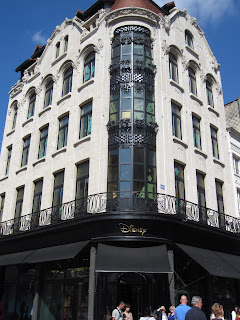 (It's hard to tell, but this is the Disney Store!  There were decals of characters on the windows, so I believe the store filled all 4 floors of this building.)


Along the shopping district had lots of places to grab food.  We found a little bakery (Bart Bakker) and got Italian paninis and a fanta.  After eating, we continued down the shopping district and exited into the "Old Town" area.  Here, we started yet another Rick Steve's walking tour.  we got to see (from the outside) the Cathedral, City Hall, Build Houses, and the Water front.  We even found a "forgotten" castle which has been turned into a cafe and "discovery" place.  We still aren't quite sure what that means after peeking in on it. 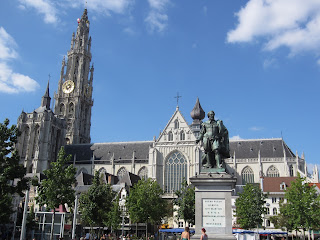 (Statue of Peter Paul Ruebens in front of the Our Lady Cathedral in Antwerp.) 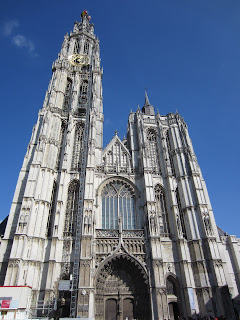 (The front side of the cathedral.  Sadly, we couldn't go inside because it was closed.) 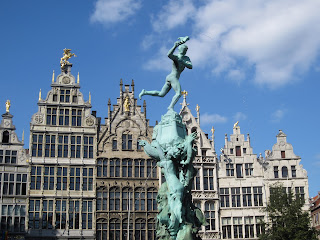 (The fountain represents an old folk tale of Brabo, a young Roman soldier, who cut off the hand of Giant Antigoon that collected tolls on the river.  The houses behind the fountain are guild houses.  The gold statues on the top represent the different guild of each house.) 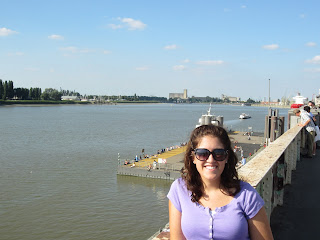 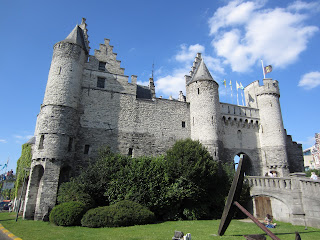 (The "forgotten castle" referred to as Het Steen --the stone-- was once the first stone fortress for Antwerp.  Now it just houses some "discovery" area and a cafe.  It appeared to have little puzzles that you could solve (like get the ball from point a to point b stuff).) 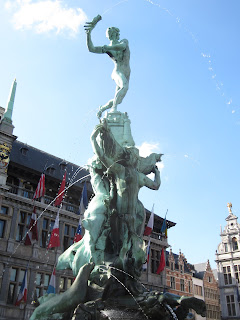 (A better picture of the fountain with Brabo holding Antigoon's hand.) 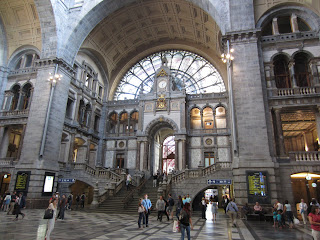 (Inside Antwerp Central Train Station.  This is the area where the famous flash mob performed to "Do Re Mi" from Sound of Music.)


After a couple of hours walking around Antwerp, we decided to call it a night and head back to Mechelen.  We got our tickets and found our train like pros.  We got back to Mechelen around 7pm.  By the time we got back to our apartment, a movie called Code Name: The Cleaner (not too bad) was starting on tv.  We ended up watching it while I packed up our suitcases and Steve planned out the next part of our trip -- Bruges!
Posted by Unknown at 11:35 AM