We called Phillippe & Olena's apartment home for an entire week.  Their apartment was decorated in everything Ikea & was very organized and cleaned.  We felt just at home in it. 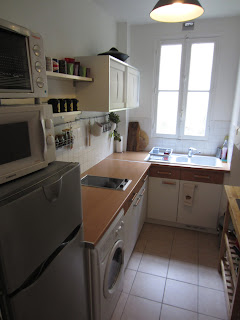 (When you first entered the apartment, the kitchen was on the right.  I made dinner every night on that tiny stove. This set up worked well for a week, but I can't even begin to imagine using this kitchen everyday.  I'm pretty sure this was tiny than the kitchen we had in our 1 bedroom apartment senior year of college.  At least in that apartment we had an oven!  They did have a microwave-- which we used -- and a toaster oven.) 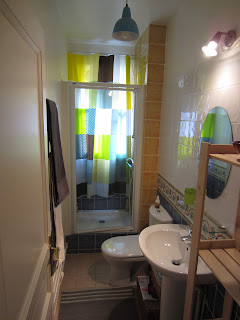 (If you continue down the hallway, next comes the bathroom.  As with everything else in Europe, it was small, but it worked for a week.) 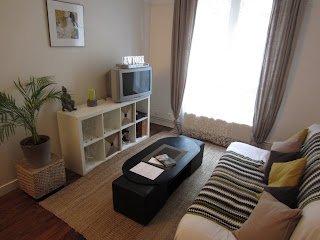 (Then the hallway opens up into the living room.  Look at all that Ikea stuff!  We definitely own the smaller version of that cabinet in birch.  This was the spot where we hung out, ate, and relaxed each evening.) 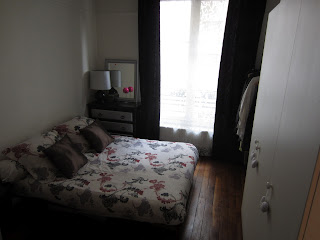 (Lastly is the bedroom.  They were super organized and everything had its place.  The bed wasn't the greatest, I could feel the springs in the mattress, and the middle was worn in more than the sides so we'd fall into the middle.  The pillows were pretty good though.  Can't win 'em all.) 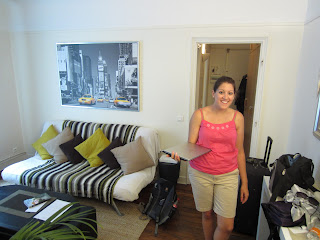 (View from the bedroom through the living room and down the hall to the exit.  This was right when we arrived in Paris & before our suitcases threw-up all over the apartment.  By day 2, this apartment was almost trashed with all of our stuff.  It's amazing how small their apartment's are and how much stuff we had crammed in our bags.  I was probably pulling out my computer to write a blog post - ha ha) 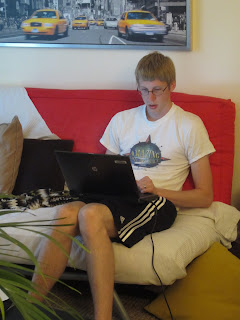 (Steve either planning the next day or just goofing off on his computer -- there's a fine line separating those two and I could never figure out what he was really up to.) 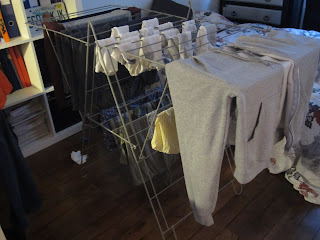 (I did 4 loads of laundry while in Paris!  I thought that their washer could also dry, but it either didn't work or I didn't know what I was doing -- which is legit since the instructions were in French.  The first load ran over night, and when I opened it up the next morning the clothes were still wet.  Steve needed socks for the day so I just ironed a pair, the rest I just laid out on this monster drying rack.  Stuff dried relatively quickly and the overall laundry experience was way better than our Barcelona laundry episode form our previous trip.  I thought I could get away with only 3 loads of laundry but I discovered that I hadn't unpacked all the clothes and missed a bunch of socks, oops.  Oh, and I have to put in a plug for Tide Pods.  I brought them with us on the trip and they worked absolutely wonderfully and traveled brilliantly.) 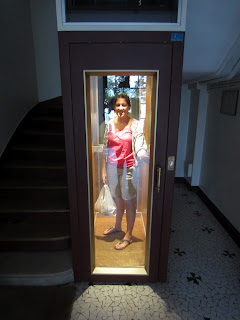 (We used the elevator to go up and down everyday.  It was small, but we could both fit on it (not with the suitcases though).  Our apartment was located on Floor 2, which is really the third floor -- because Europeans count the first floor as Floor 0.  Another one of Europe's oddities.) 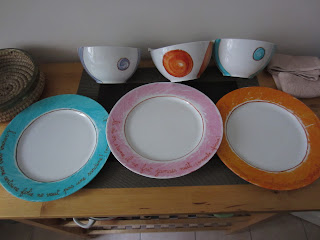 (These dishes were too cute not to share.  I think she had decorated them herself.  The back of the plates had Ikea logos, but there was also paint and color marks on the back which confirmed my homemade theory. There were like 6 different colors -- blue, purple, pink, orange, yellow, green.) 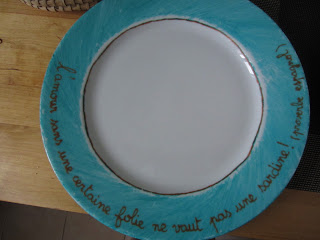 (Around each plate was a different proverb written in French.  This one says "Love without some madness isn't worth a sardine!  Spanish Proverb"  I just may have to do this with our next set of dishes.)
Posted by Unknown at 12:41 PM