Friday morning, we went on our last walking tour down Rue Cler.  Rue Cler is a pedestrian only street that houses several food shops and cafes.  It is located in a more "sophisticated" location and appealed to middle class Parisians.  It's typical for Parisians to go to stores several times a day.  Because their fridges are so small they will just buy what they need either for the day or for a meal at a time.  We went in late morning and only about half the shops were open.  We weren't sure if we were too early or too late. 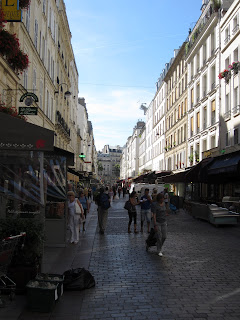 (A view down Ru Cler)

After strolling down Rue Cler, we walked over to Les Invalides.  This complex was originally created to house war veterans who needed medical attention and help after the war.  When Napoleon saw the complex, he decided that he wanted to be buried there upon his death.  Today, one building is Napoleon's tomb (others are buried in it as well) and the other buildings are museums.

We started in the back of the complex and visited Napoleon first.  After seeing his overly extravagant tomb, we found a bench under some trees in the garden to eat some lunch.  I brought slices of a baguette, lunch meat & cheese.  (We kept the meat and cheese cold in a cooler with an ice pack that I brought from home). We made our sandwiches and enjoyed the view through the gardens.  Once we were re-energized, we headed into the WWI & WWII army museum. 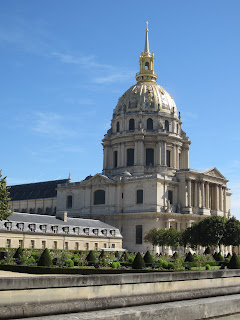 (Les Invalides -- Napoleon is buried in this building directly under the dome. The museum portion is located behind this building in different wings of the complex.) 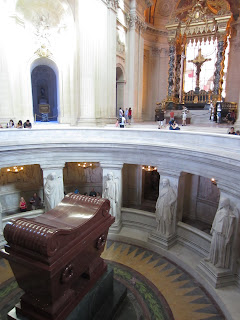 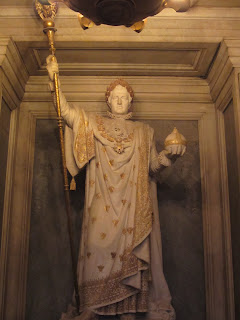 (You can go down into the crypt and walk around the sarcophagus.  Along the walls are scenes and even a statue of Napoleon.  His son Napoleon II is buried in a little alcove behind Napoleon's sarcophagus.) 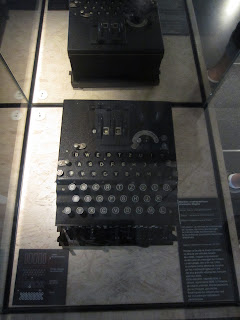 (The enigma machine from WWII.  The allies were able to steal one of the machines and decode the German's plans.  This machine had a huge influence on the end of the war and the German's defeat.) 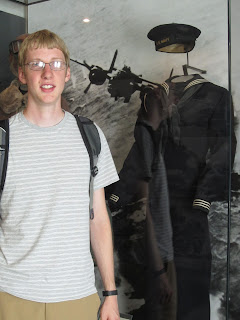 (So this picture is not the great at all, but I couldn't resist this opportunity.  I made Steve pose in front of this WWII naval uniform.  It is nearly identical to his grandpa's naval uniform that we own.  I keep telling Steve that a lot of the stuff we got from his grandpa could -- and should -- be in a museum.  After seeing the uniform in the glass case, Steve became a believer.)

After finishing up at the museum, we walked to the Rodin house/museum.  For those of you non-Rick Stevesers, he not only does outside walking tours that calls out little tidbits about stuff, but also does in-museum tours.  That's how we figure out what we're seeing and why we decide to go to the places that we do.  This was the one place that the book failed us.  The museum was under construction with rooms closed and a lot of the statues were moved around.  We attempted to try to find the statues Rick Steves had information on, but we gave up and just walked outside through the garden to see some of his famous works (that they couldn't move around).  It was pretty hot outside so I talked Steve into buying some ice cream.  It as way over priced, but most of Europe is over priced - ha! 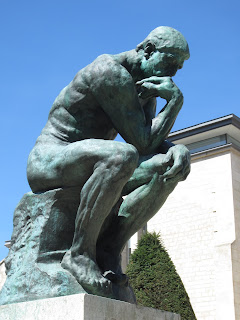 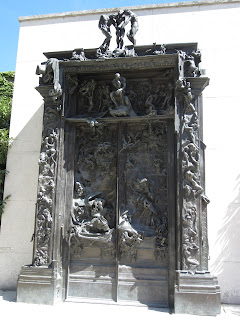 It was getting too hot to be outside, and we knew we would have a late night, so we went back to the apartment around 3:30 in the afternoon.  Before going to the apartment, we stopped in at the supermarket and got frozen wings to heat up for dinner.  I brought a packet of rice from home that we also ate.  After resting up, watching some more Grimm, and eating, we headed back out via the metro to go see the Eiffel Tower.

It was weird -- when we got off the metro, we walked up to the street and we couldn't see the tower! I thought maybe we were in the wrong location, but once we rounded the building we spotted it! 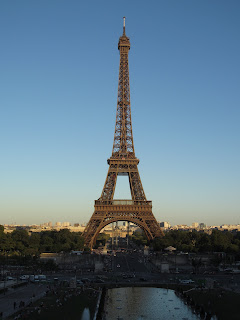 (Let me just rave for a minute about Steve.  He pretty much took EVERY picture on our trip.  I may have only taken like 5 out of the 400+ pictures.  He gets intense about where the sun is how to angle the shots.  I absolutely love having him as a photographer.  I feel like he captures some pretty awesome shots -- like this one!) 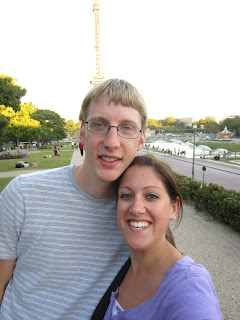 (We tried very hard to take our picture together in front of the tower, but we failed.  This is one of the pictures that I actually took.  Steve didn't approve of the sun's angle.  I'd have to agree on that one.) 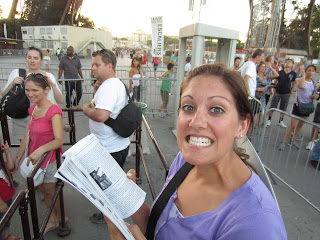 (We got to the tower just after 8.  We were one of the crazies who didn't have a reservation and the regular elevator line was pretty long. We estimated that it would probably take an hour to get up to the top.  Being young and crazy, we decided to go into the much shorter line -- to WALK up the 600+ stairs to reach the halfway point.  Before starting the climb, I read the background of the tower from our beloved book.  This is my "I can't wait to walk up 600+ stairs" face.) 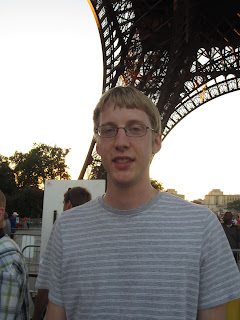 (Steve before walking up the stairs.  The tower is broken into 3 levels.  Level 1 can only be reached by stairs.  Level 2 can be reached by stairs & the elevator.  You then have to transfer to another elevator to get to the 3rd level.  We walked up to the 2nd level but didn't want to wait in another long line for the elevator to the 3rd level.  We enjoyed the view and walked back down to the bottom.) (We got to watch the sunset from atop the tower.  This is how it looked when we continued to walk up to level 2.) 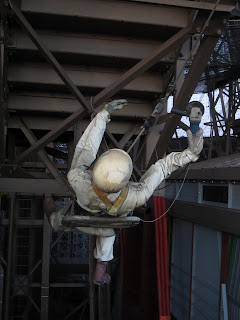 (I don't know why, but I got a kick out of this little dummy hanging off the stairs in between levels.) 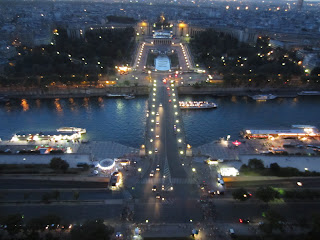 (This is how it looked from level 2.  The sun was down and the city was lighting up.) 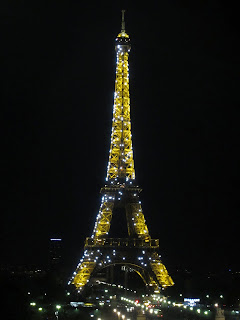 (We got back to the Tocedaro -- an area with trees and a fountain on one side of the tower -- at 9:50.  Steve bought us some drinks -- lesson learned, bring water bottle to the tower -- and we waited on a cement ledge until 10.  That's when the tower got all sparkly with lights like it did for the millennium celebration.)


While waiting for the tower to light up, lots of chotsky salesmen kept coming around.  As soon as the tower lit-up, we high tailed it out of there to beat the crowd to the metro.  We got back to our apartment just after 10:30 and then we headed to bed.
Posted by Unknown at 4:26 PM