Our last day in Paris came way too quick.  By the end of the week, we felt like we hadn't really done much and that our time was running out; but in reality, we covered almost all of Paris.  We only had two sites to hit on Saturday -- The Cluny Museum & The Louvre.

We originally did not have plans to go to the Cluny (medieval art), but we had extra time.  I don't think I explained this earlier in my blogs from the trip, but if I did, bare with me -- we bought museum passes for our 6 days in Paris.  1 6-day pass cost 69 euros.  The museum pass is accepted at almost all museums/sites.  From everything that we visited, we only had to buy tickets to the Eiffel Tower, everything else was covered by our museum pass -- Cluny, Arc de Triomphe, Versailles Chateau, Louvre, Saint Chapelle, L'Armee Museum (just to name a few).

Before we got on the metro to head to the Cluny Museum, we first stopped in at the grocery store.  We bought a couple of packaged sandwiches and put them in our cooler in our backpack.  We then got on the metro and headed to the museum. 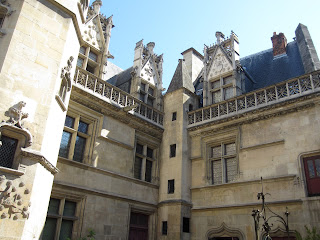 (The Cluny Museum.  The museum is located inside the Hotel Cluny.  It is  not a hotel like what we think of in America, hotel in this case just means a town house.  There were lots of big structures around Paris known as Hotel such and such.  The structure used to be used as a home for local abbots and had been constructed on an encient Roman bath.  One of the rooms in the museum is the frigidarium where the Romans would cool off.) 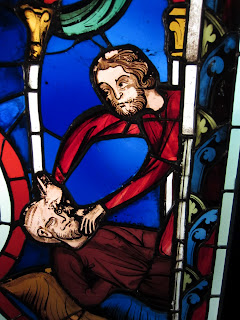 (One of the rooms in the museum had a bunch of stained glass from Saint Chapelle.  It was really neat to be able to see the pictures up close.  This scene is of Samson having his eyes gouged out after Delilah had cut off all his hair.) 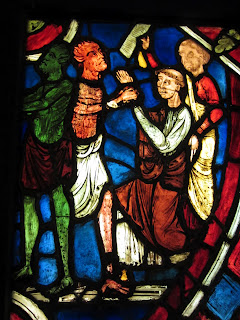 (Ha ha, this one made us chuckle.  Rick Steves had a joke about the guy on the right regretting the deal he just made with the devil.  How do people survive European places without Rick Steves and his wit?) 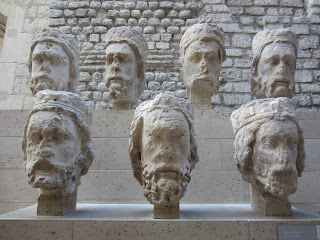 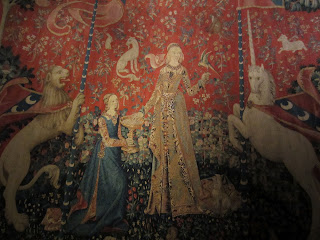 (One of the Unicorn Tapestries.  These are a series of medieval tapestries that highlights each of the 5 senses.  This one covers taste.  The lady is pulling a piece of candy out of the dish and the lion and unicorn look on & desire a taste of it, too.)

Once we finished up at the Cluny Museum, we walked to the Louvre.  It was only supposed to be 79 degrees out, but it was definitely close to 90!  It was getting pretty hot out, especially in the sun.  Fortunately, we were able to walk most of the way in the shade.  Before going into the museum, we found a spot in the shade and ate our sandwiches and sodas that we brought.  After we ate, we went inside the Louvre and began our LAST Rick Steves tour from Europe Trip 2012 2.0. 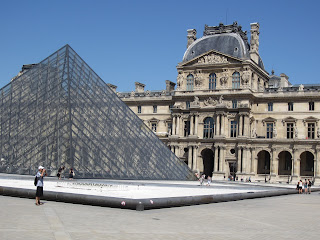 (The Louvre is made up of 3 different wings.  I think our tour pretty much hit all the major art in each wing.) 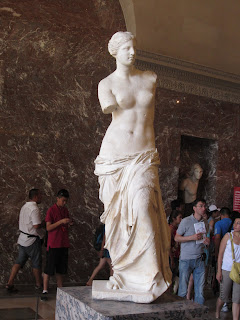 (Our tour started with Venus de Milo.  From there, we went through ancient Greek & Roman art.) 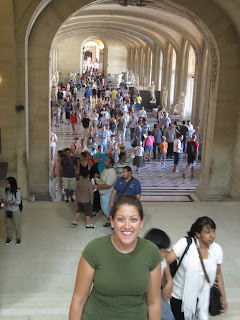 (The Louvre was pretty packed in certain areas.  In the areas with lots of people, it was pretty warm and stuffy.  Every once in a while, we'd walk over an AC vent and we'd fight over who got to stand on it.  Ha ha.  But once you walked away from the crowds, it cooled off.) 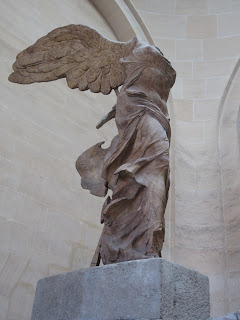 (Winged Victory of Samothrace -- this statue c. 190 BC was created to honor the goddess Nike as well as to honor a sea battle.) 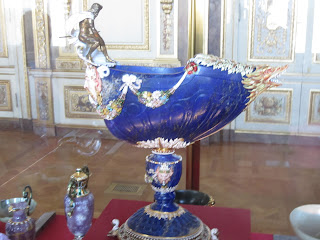 (We walked through a wing that had a bunch of table ware and dishes from French royalty.  All of the dishes were decorated with odd things like dragons, eagles, and even people -- like the one in the picture!  We also saw France's crown jewels from Charlemagne & Louis XV.) 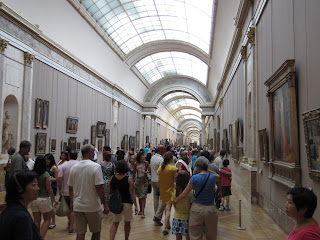 (We walked down the Grand Gallery and really enjoyed looking at the different paintings.  Supposedly, Rick Steves holds a heal to toe visitor slalom from end to end of the gallery in 1 minute 58 seconds.  We sadly did not attempt to break his record.) 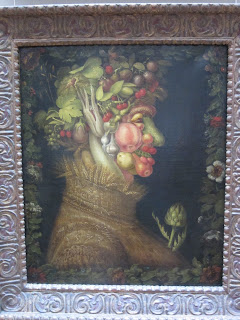 (I got a kick out of this picture.  It is from a series of 4 paintings.  I have no idea what the paintings are called or who the artist is, but I thought it was neat how they made the person out of fruits, vegetables, wheat, and a burlap sack.) 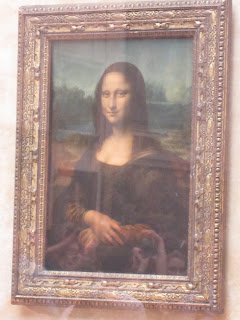 (Halfway down the Grand Gallery, we turned to the right and entered a room full of people.  On a fake wall in the center of the room was hanging the very small Mona Lisa.  It's crazy how out of all the art, this small painting is the most known and is valued so highly.) 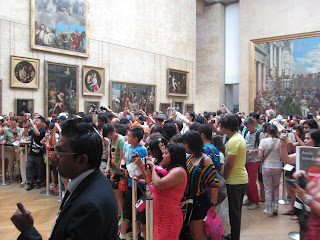 (The paparazzi mob in front of the Mona Lisa.)

We briefly walked through the neo-classical & romanticism wings, which finished up our last Rick Steves tour :(.  For the first time on the entire trip, we put the Rick Steves book in our backpack and just aimlessly walked around the museum.  We went to the Ancient East area to see some of the art and finished up in the Egyptian area. 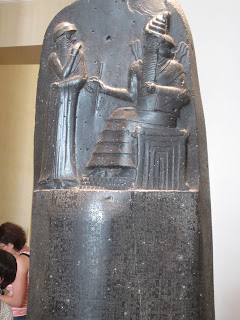 (A stele with the Hammurabi Code -- one of the oldest deciphered writings of significant length.  The code was written by the Babylonian King Hammurabi.  There were tablets and steles around Babylon with his code wirtten on them to remind the citizens of laws like #196 - If a man put out the eye of another man, his eye shall be put out.) 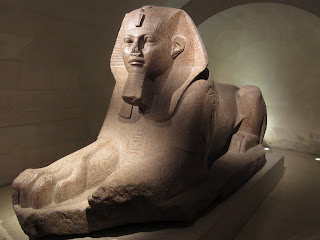 (We were on a mission while going through the Egyptian area.  We were in search of the statue in the next picture, but we stopped and took a picture of this sphinx along the way.) 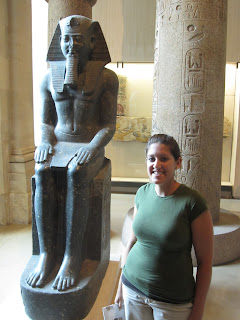 (A 'colossal' statue of Ramses II !!  We just had to find this statue in honor of our own little Ramses.  While we have been gone, he has been living it up at my parents' house.  We have gotten updates on the little guy and have been told that he is ready for us to return.) 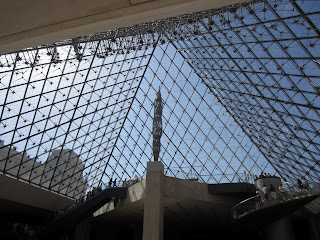 (Another one of Steve's amazing photos.  This is looking up through the giant glass pyramid.  We exited the Louvre through the pyramid via the stairs -- lower right of picture.)

It was getting late in the afternoon and we were getting hot and tired.  We said goodbye to the Louvre and and headed back to our apartment.  The apartment does not have air conditioning, or a fan, so we stopped in at the grocery store and walked through the cool section :).  We purchased a baguette to go with our dinner and then we went to the apartment.  For dinner, we had left over pasta, some soup, and a baguette.  After dinner (and more Grimm), I began to pack up all our stuff.  Halfway in the process, we popped back down to the grocery store to buy some food for breakfast and a couple of bonus items.  We went back to the apartment, I finished packing, and then we went to bed.
Posted by Unknown at 2:49 PM