Today marks 3 years of marriage for us!  It's just crazy that we've been married for 3 years and all that we've gotten to do as a couple.  In the past year alone, we bought a car, made a move to a new state, bought a house, visited Colorado, visited New Jersey 2x, and went to Europe 2x!  Absolutely ridiculous.  But I know that I am truly blessed not only to have done all of that, but to have done it with my best friend and love of my life.  I'm so amazed what God has done in both of our lives to bring us together and the growth that we've gone through in the past 3 years. 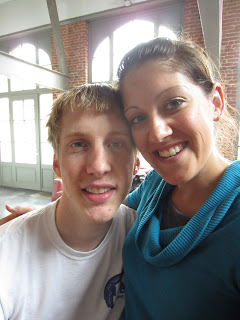 (Per tradition, or anniversary picture.  Love you!)

Okay, now back to today:

The cleaning lady comes today from 1-4 in the afternoon. I wasn't told I had to leave, but who wants to watch someone else clean?  Especially since I want to live in the fantasy that this place is clean and not see the reality of the process.

My morning was filled with cleaning up our stuff and trying to consolidate it to a small area.  I didn't want our things in the way of the cleaning lady so I stacked stuff up on a desk and pretty much through everything else in the suitcase underneath it.  I thought it was a great idea until later in the day Steve (nor I) could find anything -- oops.

So I set off just before 1 on my grand 3 hour adventure.  Prior to the trip, Steve found a brochure online about Mechelen.  After looking through the highlights and with the map in hand, I set out to explore some "hot spots" in Mechelen.  First, I went in search of "A picnic area by the river to watch fisherman".  After meandering through some alleys (I had to step over a dead mouse in one) I found the area marked on the map.  Although there was only 1 picnic table next to a playground (with kids playing) and 2 fisherman sitting on a cement block smoking.  Not what I had in mind with "watch fisherman".  You couldn't even see the river by the area.

With the picnic area a bust, I continued walking and found the St. Rumbold's Cathedral in the heart of Mechelen.  Behind the church was a grassy area (which is uncommon in European cities) with nearby benches.  I sat for 1.5 hours in front of the cathedral just writing, reading, and people watching to pass the time.  After that, I continued to walk around the church and entered the main area filled with little shops, people, and cafes.  While walking through the area back in the direction of our apartment, I discovered a little store that reminded me a lot of Ikea.  Casa was set up just like the Marketplace inside an Ikea, it was full of "Swedish" style decor, towels, picture frames, kitchen chotsky, etc.  If I had discovered this store back home (or even towards the end of the trip), I would have come out with some items :).  It's probably a good thing Steve gave me a limited amount of Euros as well as not being home.

The little shopping area dropped me off right in front of the super market.  I decided to go meander in there since I still had a little bit more time to kill.  While inside, I found a card for Steve (the one thing I forgot to get before the trip) which just so happened to be a birthday card.  Oh well.  By the time I got out of the store it was 4 o'clock and time to go home! 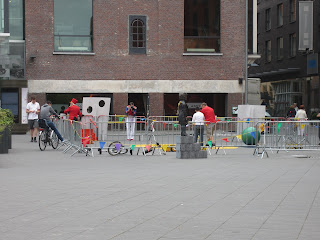 (Some little kids fair was set up in the square in front of the supermarket.  2 guys were dressed up in "ring masters" garb, and they kept getting people walking around to come into the area.  Inside, kids and adults tried to juggle and such.  It didn't make much sense to me.) 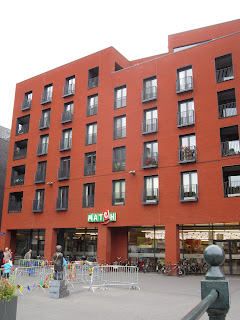 (The supermarket - Match - is located just under an apartment building just a few blocks away from our apartment.)

I wasn't home long before Steve rung the buzzer to be let in through the gate (he usually has the keys, but I had them for the day).  It was pretty overcast and looked like it was going to pour rain any minute.  But we decided to go ahead and stick to the plan and go walk through the main area and see the church together.  We also threw around the idea of getting dinner out, but we would make that decision when it came.

With our little Mechelen brochure, we kind of created our own little walking tour.  The brochure had some facts on different spots in the city and we would stop and read them when we got to those areas.  We learned about some old houses, about the church, saw the city hall, and went to visit the house of Margaret of Austria.  By the time we got to the shop area, everything was packing up for the night (even though it was 6 o'clock).  Steve was able to get some ice cream before a store closed, but we were out of luck for the chocolate shop.  Steve and I aren't ones to go through the hassle of a sit-down dinner (neither of us want to deal with the language barrier) and all the quicker places were closed.  Plus, it was starting to sprinkle, so we headed back to the supermarket and picked out a frozen skillet meal to take home. 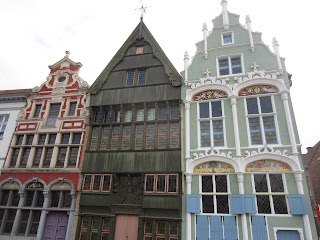 (These 16th century houses are located just down from the Supermarket and are decorated with religious scenes.  The green house to the right had images of Adam & Eve in the Garden of Eden; while the house in the middle had images from the story of the prodigal son.) 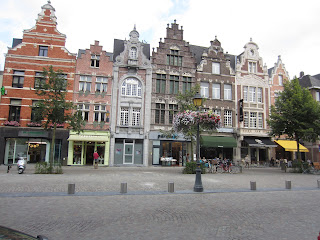 (More of the architecture in the main square.) 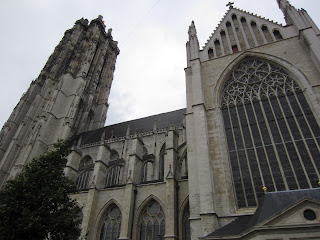 (St. Rumbold's Cathedral.  They ran out of money while making the tower and just capped it off.  They had dreams of finishing the tower recently, but decided to do a different project with the money.) 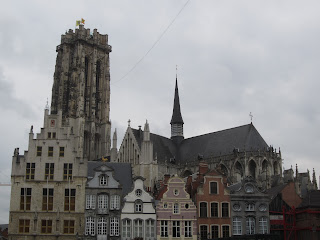 (View of the Cathedral peaking up behind the main square known as Grote Markt.) 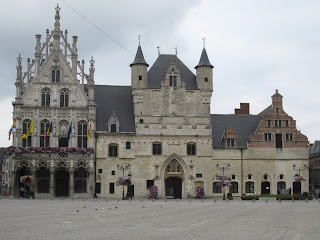 (The front of City Hall in Grote Markt.) 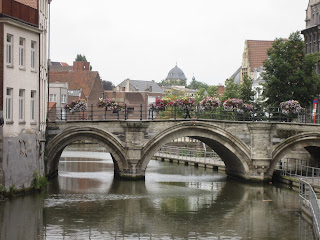 (Bridge crossing a canal.  The main area and the Cathedral is on the left side; while the supermarket our apartment are on the right side.)

Our anniversary dinner was just like a normal night at home.  It wasn't anything extravagant, but it was nice just to be the two of us and reflecting on 3 years (seriously, where has the time gone?).  We might attempt a fancy dinner in Paris, but we haven't decided yet.
Posted by Unknown at 6:25 AM