Our time in Bruges was short, but we managed to pack a lot in.  On Sunday morning, we woke up by 9 am and headed to the main square where we rented a TANDEM BIKE!!  Bah ha ha ha

Upon Rick Steve's suggestion, we rented a tandem bike and bike along the canal 4 miles until you reach the small city of Damme.  Along the way, Rick gave little tidbits and history of the area.  We got to bike pass a few Windmills along the way.  Majority of ride was spent on a smooth bike path right alongside the canal.  Damme itself was nothing special.  We parked our bike in the main square and walked around.  There was some sort of a book flea market going on.  We walked past the town hall as well as the church grounds; but we didn't have long (which is find because the city was pretty small) and had to get back on the bike to return to Bruges.

We debated on whether to get 2 bikes or 1 tandem, but there was only a 2 euro difference and we went ahead and got the tandem.  Steve rode in the front and did all the steering, I was "the power" as Steve coined it.  I couldn't really see over Steve so I had to do a lot of trusting (which was difficult in the beginning).  We thought about changing positions, but the way the back handle bar was situated, I don't think Steve's knees would have fit.  In fact, my knees hit the handlebars periodically and I ended up with several cuts along my thigh was war wounds.  We surprisingly got the hang of riding tandem pretty quick.  By the end of the bike tour, we were pros at starting and balancing in unison.  We only had 1 minor mishap that could have been a catastrophe, but we pulled through.  For some reason the front wheel "slipped" (so Steve claims, remember I couldn't see anything) and Steve lost control, but with quick thinking, we pulled through and did not crash -- whew!  And might I add, there were no tears involved in the biking extravaganza. 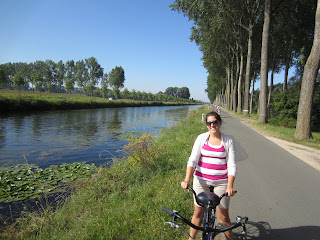 (Bike Path along the canal.) 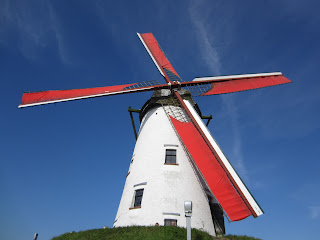 (One of the few working windmills. Unfortunately, it was closed on Sunday and we didn't get to climb inside.) 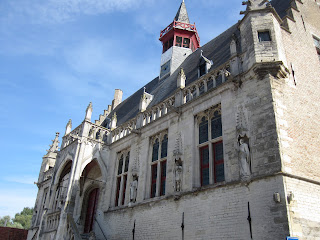 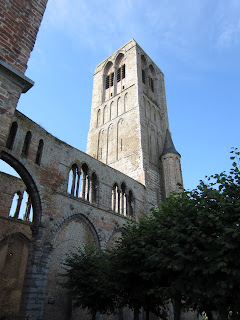 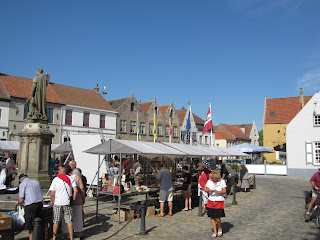 (Damme is known as a book town and we happened to visit it on one of its regular "book fair" days.) 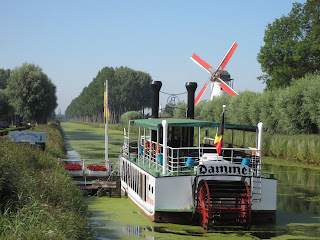 (View down the canal back to Bruges.  The building in the way distance is Our Lady Church in the middle of Bruges. You can also see the windmill that we stopped at as well as a boat that you can ride to get from Bruges to Damme.  The bike path is along the trees on the right of the canal.) 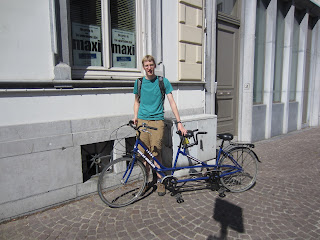 (Steve walking the bike back to the shop)


We had rented the bike for a 4 hour window, but we needed to return it sooner so that we could make our train on time for Paris.  We walked the bike back to the shop once we reached the main area in Bruges (because pedestrian traffic was picking up).  After returning the bike, we stopped in at the chocolate shop again and bought more chocolate -- only this time, we got to choose which chocolates we wanted to fill our MEDIUM sized box.  With our chocolates in hand, we made one last stop at the waffle stand to get 2 regular waffles (after all the biking, we deserved our own).  We got back to our apartment and had about an hour to shower and pack before leaving Bruges. 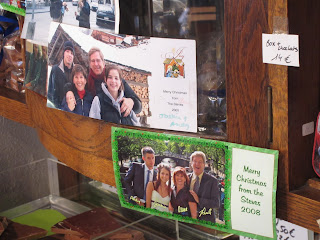 (You know the shop is a good one when Rick Steves's family Christmas cards are plastered all over the wall!  This was inside the Dumon Chocolatier where we got all our Belgian chocolate.  The shop is family run by Stefan & Marie-Anne Dumon.  They all spoke great English and helped us figure out which chocolates we would prefer the best -- white, milk, or dark chocolate as well as tons of fillings like raspberry, strawberry, caramel, hazelnut and almond -- just to name a few!) 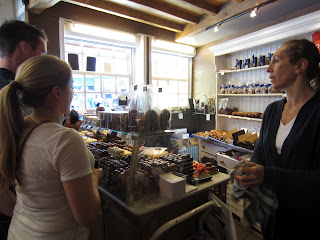 (Inside the chocolate shop.  The room was very small and had chocolates all over it.  I think there was a basement room, but we only got as far as the front counter with all the freshly made chocolate.)


With our suitcases in tow, we walked back to the train station and caught an hour long train to Brussels.  Once in Brussels, we surveyed food options and settled on a sandwich shop where Steve got another baguette sandwich while I got a ham wrap.  After eating, we found platform 5 to catch our high-speed train to Paris.  The train was to depart at 4:15, but we got up to the platform by 3:45 so we could sit and figure out the seating system.  We knew our assigned coach number and seat number but weren't sure how to figure out which train compartment was which.  A train pulled into platform 5 and we watched it unload.  We wanted to watch what other people did before trying to figure out where our seats were.  There was a screen with information about the train, but it wasn't updating.  Steve went on a walk to look at other screens and see if we could figure this out (it was going past 4 by this time).  When he returned, he had discovered that our platform was switched to 6 (5 & 6 shared a platform, so we just had to go to the other side).  The train information was updated and we could see where our correct coach was.  Other than clueless people hogging up the aisle way, we got to our seats just fine.

The train ride was about 1.15 hour, but it went by pretty quick.  In the beginning, it was hot and stuffy but about 15 minutes into the ride, the air kicked on (just in time, Steve was about to lose it!)  We got to the Paris station and tried to find a tourist info booth so that we could get a full map of Paris (that's right, we had a couple of small maps that showed specific sections, but none that showed the whole city).  We luckily found one, figured out where are new apartment was located, and set off in the right direction.  We got turned around a few times (sometimes street names don't line up with the map, or aren't listed on the map), but finally showed up at the right place.  Our current host is in Dublin right now and left us detailed instructions on how to get into the apartment.

We were hungry and had high hopes that we'd find a supermarket that was open (even though it was just going on 7, it was a Sunday and a lot of things are closed on Sundays, and Monday, and random times during the day).  We found the supermarkets, but they were all closed.  Luckily, our neighbor next to the apartment complex is a Chinese restaurant and they were open.  We ordered 200 g of some sort of spicy chicken, 200 g of fried rice, and 100 g of beef with onions.  We carried our haul upstairs to our apartment, heated up the food, and enjoyed a tastey meal.

Our evening was spent relaxing and preparing for what the week holds.  We did get to watch a little bit of the closing ceremonies on the tv, but it was all in French.  No English channels here.  Oh well, who goes to Paris to watch tv?  (That's what Steve keeps asking me, he doesn't like my answer of "me!").
Posted by Unknown at 2:24 PM