Today, we switched it up and walked to a further metro stop in our area.  We needed to walk the extra distance so that we could get to the right RER line to head to Versailles.  When we arrived at the station, we needed to ask the information person about the lines to make sure they were all open and not under construction.  We had to wait a little bit for the person to return, but she confirmed our route, we got our tickets and we were on our way.  We knew that there were 2 different trains that left for Versailles, one at 7:49, the other at 8:15.  We got to the RER station at 7:45 and ran to catch the first train.  We got on with a couple minutes to spare. 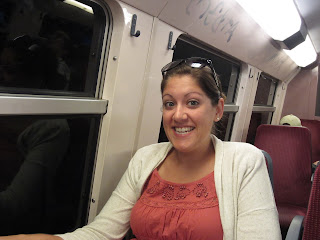 (After running through the RER station.  So much for conserving our energy for the big day at Versailles.) 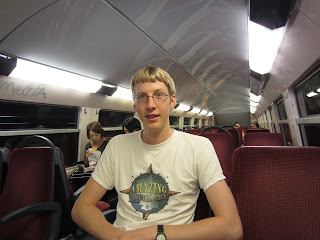 (Steve's energy was much higher than mine.  His long legs produce a bigger stride and didn't have to "run".)

Once we got to the station, we went ahead an bought our return tickets (to avoid lines later.)  We then walked down the street and made it to the Chateau! 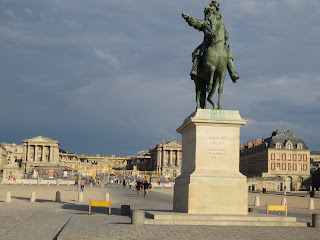 (King Louis XIV in front of the Chateau.)

We got to Versailles about 30 minutes before it was to open.  Since we had museum passes, we were able to bypass the ticket line and just line up for the security line into the Chateau.  We were lucky and got there before the line was too long.  As we waited, more and more people joined the line and others just started to huddle around the entrance.  Security came out and tried to keep the line separate from the people hoping to cut in.  We actually had a couple cut in front of us and I yelled (politely, but sternly) to get out of the line.  They did as I said! 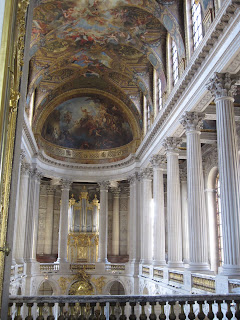 (This is the chapel inside the Chateau, but it is the only reference to God in all of Versailles.  King Louis XIV was more concerned with using the Chateau and grounds to glorify himself and not God.  No wonder the monarchy fell a few kings later. . . ) 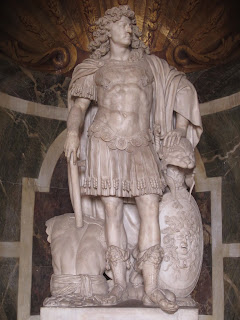 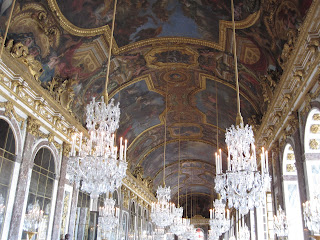 (The famous Hall of Mirrors.  This is the room that the Treaty of Versailles was signed indicating the end of WWI and blaming Germany for causing it.  What a slap in the face to German to sign the treaty, promising to pay reparations in a very wealthy and opulent room.) 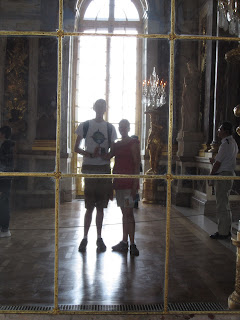 (The mirrors in the hall were pretty hazy.  We can only imagine how glitzy this room used to be back in its hey day.  Steve obligingly posed for a picture in the mirrors.)

After going through the Chateau, we went outside to the gardens.  We bought tickets to enter the gardens for a special fountain show.  They only turn on the fountains a few days out of the year, and we just happened to visit on one of those days!  They only turned certain fountains on at certain times.  We first found a shady spot and mapped out our visit to the gardens. 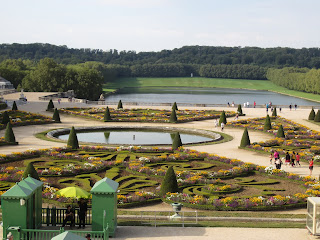 (The gardens were pretty extensive.  Some areas had flowers and designs, while other areas were secluded between really tall hedges.  The fountains were spread out all over, each one with a different theme.) 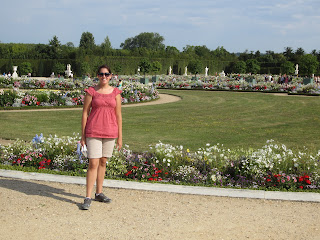 (Some more of the flowers.  Supposedly back in the day, they would change out the flowers often and arrange "floral bouquets" for the "royal noses".) 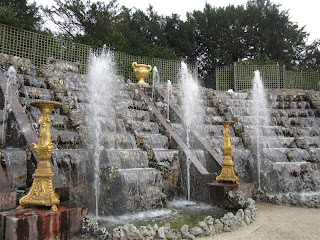 (The fountain known as The Ballroom.  We waited at this fountain first and watched the water slowly trickle down and then shoot up!) 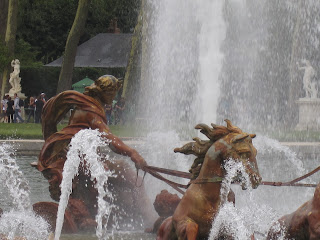 (Apollo's Chariot Fountain -- King Louis XIV, who pretty much built Versailles, was also referred to as the Sun King and was associated with Apollo.  Some even said that this fountain wasn't of Apollo but of King Louis XIV himself.)

We took a break in the afternoon from the gardens (since the rest of the fountains wouldn't turn on until later) and had a picnic lunch.  We brought with us slices of a baguette, slices of swiss & turkey, Coke, and a Fanta.  After we ate, we headed up to the Grand Trianon -- a little palace that King Louis XIV had built for his mistresses.  He was able to spend time with them there while his wife was in the Chateau. 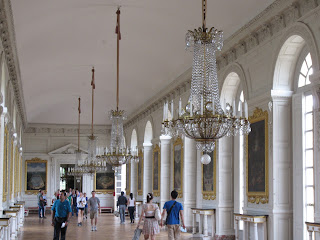 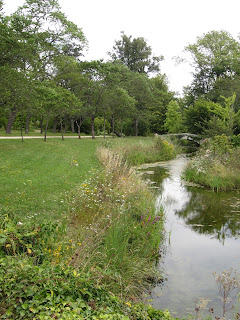 (After exiting the Trianon, we went through its gardens!  How crazy is it that they have a palace with gardens inside the gardens of a Chateau.  Oh to be rich.  These gardens were much more country-esque, and not so structured.  We walked along a little creek to a village known as The Hamlet.) 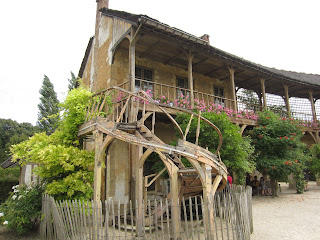 (Mary Antoinette (King Louis XVI's wife) had the Hamlet made.  It was a little working village inside the gardens around Trianon.  She herself would oversea its operations (but she didn't do the work).  The house in the picture is of "The Queen's House".  There as also a mill, a farm, and a dairy.)


After walking around the Trianon's gardens, we returned back to the Chateau's gardens and found a bench in the shade.  We had absolutely beautiful weather.  It was pretty cool and overcast in the morning, and sprinkled a little bit, but by late afternoon it was becoming more sunny and warm.  We were getting hot and tired, and I even think I fell asleep a little bit while waiting on the bench.  But after 30 minutes or so, the rest of the fountains turned on and we made our way around the rest of them. 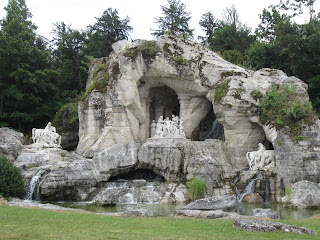 (Apollo's Grove.  This fountain was one of our favorites.  You couldn't get close to it and could only view it from afar.  The rocks were all man made and formed to look like the side of a mountain, and the statues were brought in to complete the fountain.) 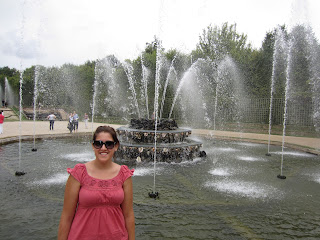 (I don't remember which fountain this was, ha ha.  We kind of got confused at the end.  Some of them were located close to each other and it was hard to figure out which was which.  I think this one had to do with Nymphs, but don't quote me on that.) 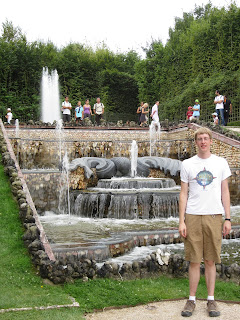 (This area was my favorite!  These fountains were known as the Grove of Three Fountains.  There were three separate tiers with fountains built in between each tier.  When we walked up to get to the top, we got wet from one of the fountains due to wind.) 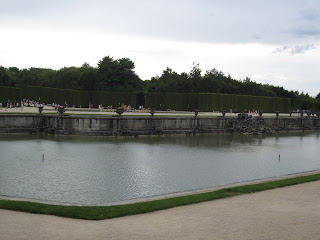 (This is Neptune's Fountain.  It was the "grand finale" of the show and wasn't going to be on until 5:20, and would only last for 10 minutes.  We were getting pretty tired and the weather looked like it might get bad, so we decided to call it a day at Versailles.  I would suggest only going and visiting the gardens on a day with the fountain show.  It really made the day for us!) 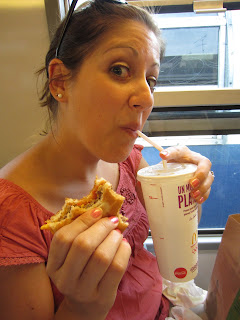 (On the way back to the train station, we found a McDonald's!  Even though Steve didn't want to give in to American food while in Europe, we caved.  It's really hard to find quick meals in Europe after 5 o'clock.  We knew if we didn't eat here at the McDonald's our chances of finding a place later were slim.  And I wanted a break from dinner making.)

We ordered our food at McDonald's from a little kiosk to have to avoid language barrier.  We picked up our food and took it with us to the train station.  We missed one train, but there was another one waiting.  We sat on it and ate while we were waiting for departure.  The train ride back to Paris was only 30ish minutes.  We then headed to our apartment and called it a night.  I even think we went to bed early.  We were tired from all the walking!
Posted by Unknown at 5:00 AM