We are growing accustomed to our new Mechelen routine.  I yet again slept in while Steve up & out shortly after 7am.

I spent most of my day being product as opposed to just watching tv and watching the time pass by.  I got a few blog posts written and scheduled to be released throughout the week.  I also got to skype with my sister Amber and her two youngest  Allie & Gabbie for almost an hour.  By the time we got done talking, I realized Steve was due to be home soon.  So I sped through a shower and got ready for the day (even though it was going on 5pm (vacation, right?).

He buzzed on the intercom just after 5.  We (well Steve) decided we should go for a bike ride by the canal.  There was 1 bike in the apartment hanging on the wall with a note saying another bike was down in rack #16.  Steve carried the back down the two flights of stairs, down to the bike rack, to discover that #16 was empty.  Without knowing what the other bike looked like, we scrapped the bike ride idea.  Steve had to carry the other bike back up the 2 flights of stairs.

We decided to just go for a walk down to the canal that Steve crosses to work every morning.  Along the way, we stopped by the city's original gate -- Brusselsport.  We ended up finding a bench along the canal and just sat there and soaked up life in Mechelen. 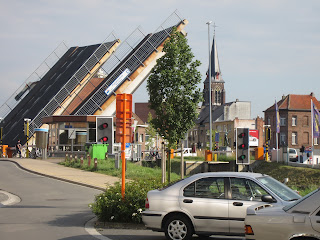 (Steve crosses this bridge every morning across a canal to get to the P&G plant.  Sometimes, he has to wait for the bridge to be raised/lowered to let boats pass through.  We just so happened to walk to it as it was raising to let a boat through.) 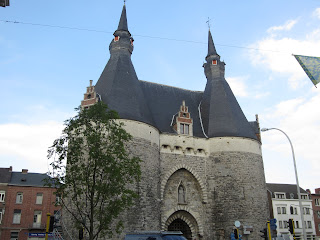 (Brusselpoort -- the only remaining or 12 gates that once surrounded Mechelen.) 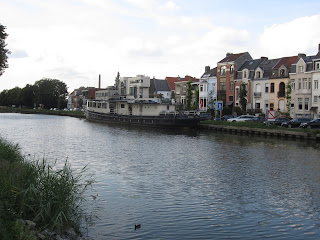 (Picture of the canal as we enjoyed it from the bench.  We got to watch some ducks as well as a kayaker in the canal.)

We called it quits after awhile and headed back to the apartment where I made dinner.  We had some leftover sauce from Sunday night and more noodles to boil up.  After dinner, we fought over the remainder of the frozen eclairs I bought for our anniversary the night before.  Then we headed off to bed.
Posted by Unknown at 10:46 AM